I noticed the splash of brilliant colour from a distance: walking with my dog on Childwall Fields this afternoon, I encountered a patch of Ragged Robin, a favourite flower from childhood.  It’s a plant that likes damp places like boggy meadows, marshes and ditches, and the reason I was able to get close enough to take these photos without getting my feet wet was that the recent hot, dry weather had dried out the boggy patch where they were growing. 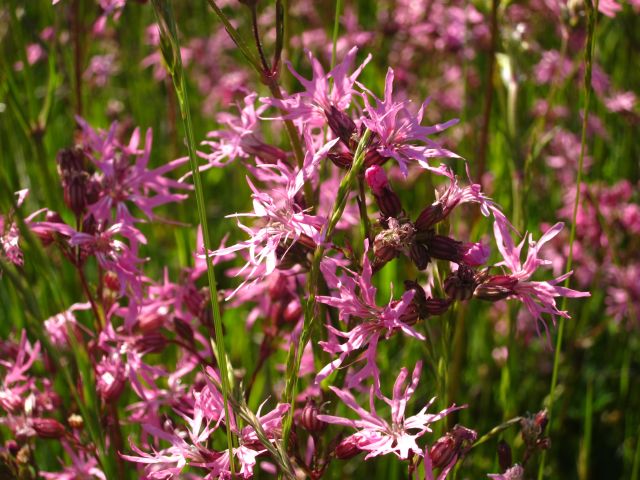 The reason for the flower’s name is obvious: the ragged bright pink petals have a tattered appearance and, as Sarah Raven writes in her recent book Wild Flowers, they:

look a bit dishevelled, like a skinny dandy after an all-night party.  So many flowers are exercises in perfection and prettiness, but Ragged Robin is cooler than that: a Red Campion that has been through a shredder.

The American writer of children’s poetry, Laura E. Richards, picks up the theme of scruffy unpretentiousness in a pretty awful poem, ‘Ragged Robin’, which begins:

O Robin, ragged Robin,
That stands beside the door,
The sweetheart of the country child,
The flower of the poor,

I love to see your cheery face,
Your straggling bravery;
Than many a stately garden bloom
You’re dearer far to me.

For you it needs no sheltered nook,
No well-kept flower-bed;
By cottage porch, by roadside ditch,
You raise your honest head. 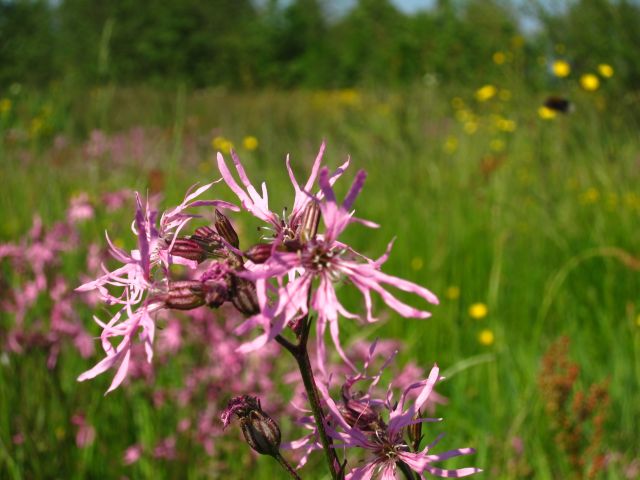 The Ragged Robin has acquired many nicknames – in different parts of the country it was once called Meadow Spink, Polly Baker, Crow Flower, Shaggy Jacks, Thunder Flower, Bachelor’s Buttons or The Cuckoo Flower.  The botanical name is Lychnis flos-cuculi; the first part – ‘lychnis’ – from the Greek for ‘lamp’ (the bright pink flowers were thought to stand out in the landscape like a lamp) while the second part – ‘cuculi’ – translates as ‘the flower of the cuckoo’ (from the observation that it comes into flower when the cuckoos first call).

It was good to see Ragged Robin flourishing in an urban setting like Childwall Fields since the frayed flowers are an increasingly rare sight in the wild. Developments such as the drainage of land for agriculture and the loss of ponds, has resulted in many of the UK’s wetlands disappearing. Here, though, they flourished alongside yellow flag in a boggy area by a pond.