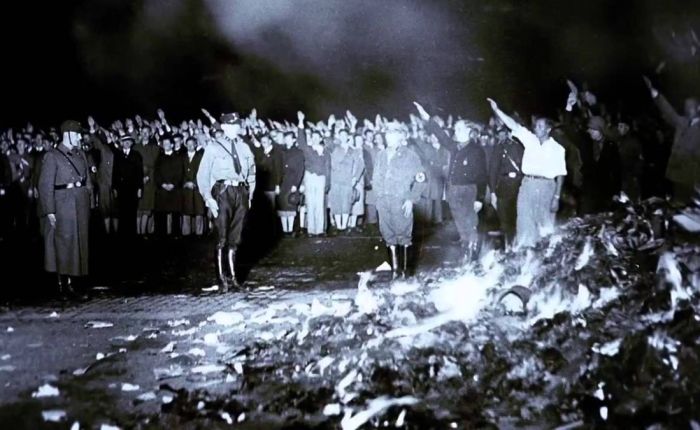 In the years of optimism we would read books and puzzle over why, in the heart of civilized Europe, people had happily abandoned democracy, believed fantastical lies, and stood by or enthusiastically joined in as those deemed to blame for the nation’s ills were murdered in their millions. In these dark days, and on this Holocaust Memorial Day, understanding is beginning to gnaw at our bones like an ague.

In times like these, the message of certain books I have read recently seems to illuminate a simple truth: that authoritarianism insinuates itself into peoples lives without drama, but with a kind of quotidinian ordinariness that slowly dispenses with facts. END_OF_DOCUMENT_TOKEN_TO_BE_REPLACED

‘My brain is cloudy, my soul is upside down …’
– Bob Wills, ‘Brain Cloudy Blues’

The sun is molten in a shimmering sky. But we are driving through mounds of snow, banked in drifts along the carriageways and lanes: drifts of Ox-eye daisies. For mile after mile along the North Wales Expressway there are tens of thousands of these gently swaying flowers that seem to thrive – often deliberately planted, I think – turning what would otherwise be an extended wasteland along roadside verges into a summer’s visual delight. When I was a child in Cheshire these flowers – so bright that they appear to ‘glow’ in the evening – were commonly known as Moon Daisies. END_OF_DOCUMENT_TOKEN_TO_BE_REPLACED 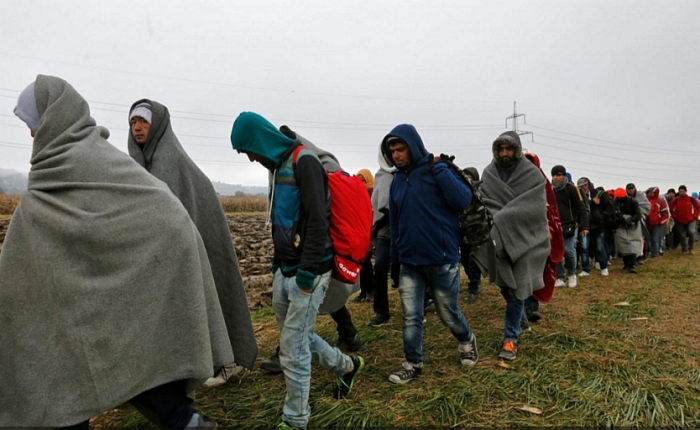 Yesterday we gathered together a few sacks of winter clothing – heavy sweaters, thick trousers, waterproof gear, that sort of thing – and stuffed a donation into an envelope.  There’s a van leaving Liverpool this weekend, bound for Greece, driven by volunteers from Mersey Aid. That heavy sweater I no longer wear because the climate change winters here are always warm may end up on the back of someone like me – a teacher from Homs, or a medic from Damascus. So little we can do as individuals.

Today the Guardian website features a comprehensive and deeply worrying overview of the refugee crisis. In Winter is coming: the new crisis for refugees in Europe, Guardian journalists report on the deepening humanitarian crisis that is unfolding along the refugee trail from the war-torn Middle East as winter sets in – from the Greek island of Lesbos to the Macedonian border and beyond. END_OF_DOCUMENT_TOKEN_TO_BE_REPLACED 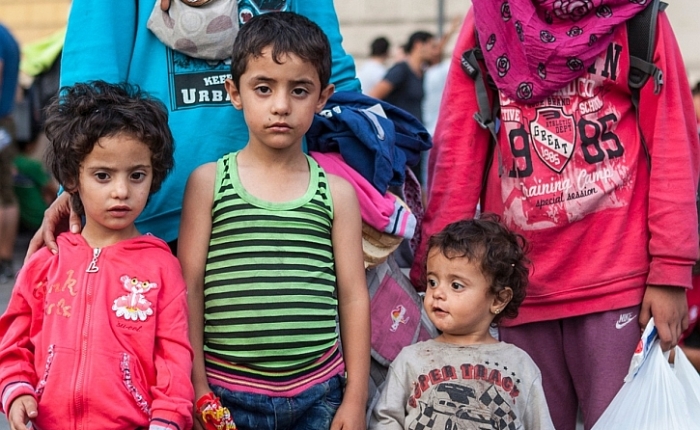 Last week, at Budapest’s Keleti station, the Observer’s Emma Graham-Harrison mingled with the refugees hunkered down on the concourse there. In today’s paper she retells eight of the stories she heard from those fleeing persecution and war. This is one of them. END_OF_DOCUMENT_TOKEN_TO_BE_REPLACED 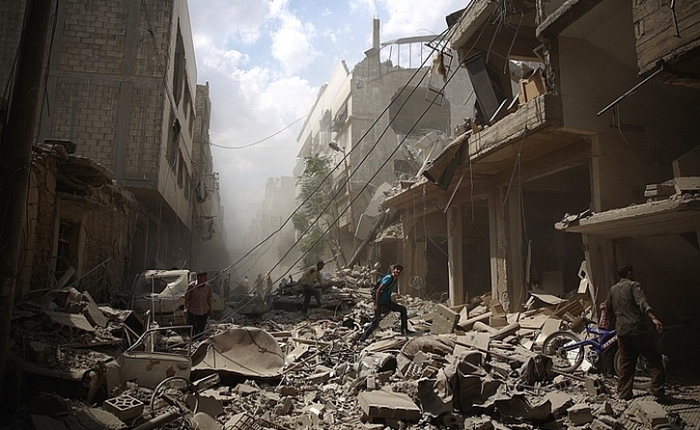 During the last few days a poem has been cropping up frequently in Facebook posts.  Written by the young British-Somali poet, Warsan Shire, Home speaks with the utmost clarity of the reasons why the many, many thousands now risking their lives on the Mediterranean, tramping through the Balkans, or along inhospitable roads in Hungary leave their homes: END_OF_DOCUMENT_TOKEN_TO_BE_REPLACED 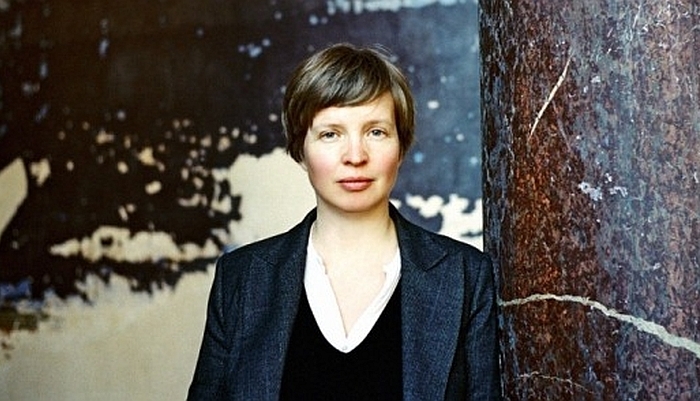 This summer I’ve read two short, critically-acclaimed novels by Jenny Erpenbeck: Visitation, and The End of Days, winner of the Independent foreign fiction prize. I have to say that both books left me a little cold. END_OF_DOCUMENT_TOKEN_TO_BE_REPLACED 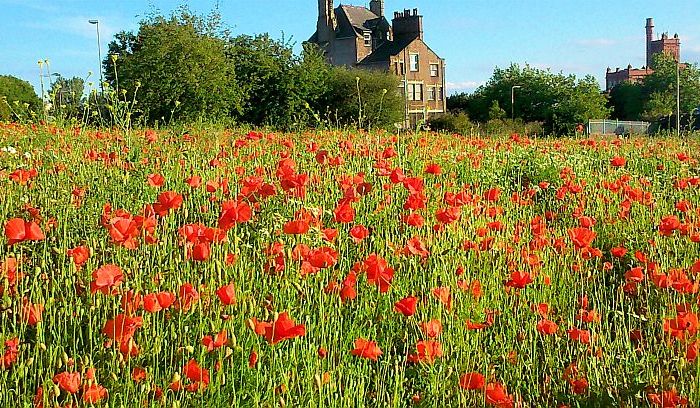 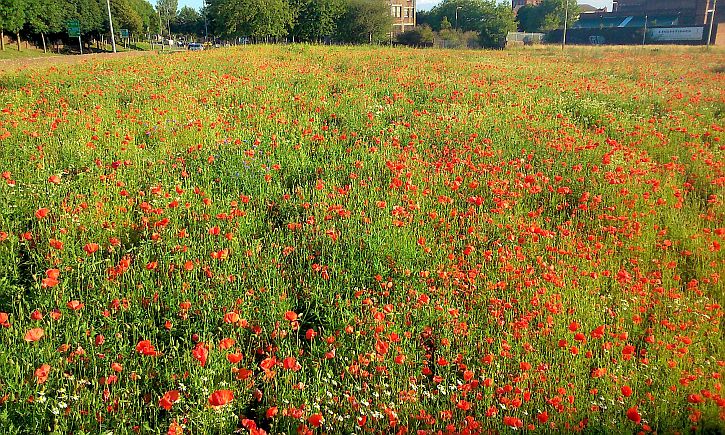 In the last couple of weeks a surprising sight has materialised in the middle of Liverpool: a field of poppies, swathes of red flowers densely massed against a background of green.  It’s a stunning sight, but also one that is, in this glorious summer overshadowed by the storm clouds of war in eastern Europe and the Middle East, inescapably symbolic.

How did this poppy meadow, on derelict land below the Anglican cathedral, get here?  Earlier this year, members of Liverpool’s Chinese community sowed native poppy and cornflower seeds on vacant land stretching from the Cathedral towards the Chinese Arch. The act was part of a project linking local business and community groups with partners in China. The land was sown with locally grown wildflower seed from Landlife, the local environmental organisation that fifteen years ago established the National Wildflower Centre located near to the Liverpool end of the M62.

The poppies have flourished in recent weeks, and after catching sight of them from the bus, the other evening I walked down and captured these shots on my phone’s camera . 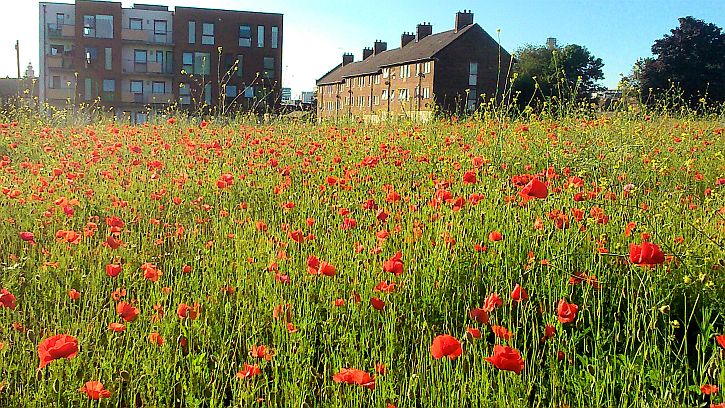 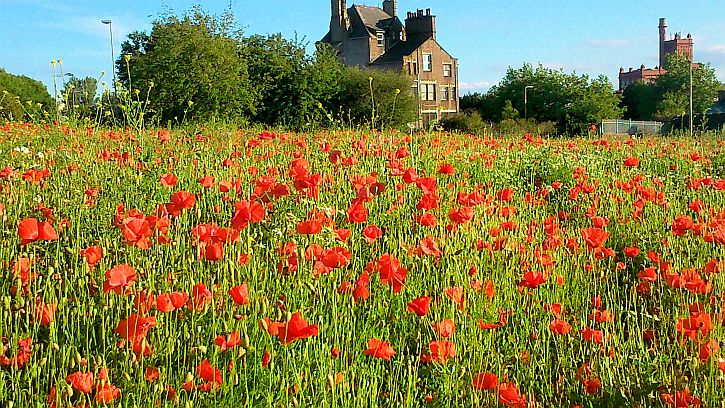 Red poppies: symbol of hope and good fortune in China

It was a glorious evening (a group of us, old friends from university days, sat outside Camp and Furnace savouring the warmth as darkness fell); so why, as this lovely summer stretches on, have I felt a vague sense of foreboding?

Clearly, the feeling was reinforced by the sight of those poppies with their inescapable associations (at least for the British). But, more than that, I couldn’t get out of my mind – as terrible news emerged from Gaza and eastern Ukraine – the feeling that we might be living through a re-run of another glorious summer, exactly one hundred years ago.  This is Paul Fussell writing about the summer of 1914 in The Great War and Modern Memory:

Although some memories of the benign last summer before the war can be discounted as standard romantic retrospection turned even rosier by egregious contrast with what followed, all agree that the prewar summer was the most idyllic for many years.  It was warm and sunny, eminently pastoral.  One lolled outside on a folding canvas chaise, or swam, or walked in the countryside.  One read outdoors, went on picnics, had tea served from a white wicker table under the trees.  You could leave your books out on the table all night without fear of rain.  Siegfried Sassoon was busy fox hunting and playing serious county cricket.  Robert Graves went climbing in the Welsh mountains.  Edmund Blunden took country walks near Oxford, read Classics and English, and refined his pastoral diction.  Wilfred Owen was teaching English to the boys of a French family living near Bordeaux.  David Jones was studying illustration at Camberwell Art School. And for those like Strachey who preferred the pleasures of the West End, there were splendid evening parties, as well as a superb season for concerts, theatre, and the Russian ballet.

For the modern imagination that last summer has assumed the status of a permanent symbol ofor anything innocently but irrevocably lost. […] Out of the world of summer, 1914, marched a unique generation.  It believed in Progress and Art and in no way doubted the benignity even of technology. The word machine was not yet invariably coupled with the word gun.

Never such innocence again. It appears that I’m not the only one sensing the parallel.  In yesterday’s Guardian, Larry Elliott explained why he thinks the crisis following the shooting down of the Malaysian airliner in eastern Ukraine  will not escalate into a full-scale economic war.  Europe’s energy requirements and economies are too intertwined with Russia:

The European Union will talk tough but fall shy of imposing wide-ranging financial and trade sanctions as punishment for the Kremlin’s alleged role in the attack on the Malaysia Airlines jet. Meanwhile, hopes that Putin is putting pressure on the separatists in Ukraine boosted share prices.

And yet. Elliott, too recalls the idyllic summer of 1914, when a little local difficulty in Serbia seemed just a tiny cloud on the distant horizon:

Events of a century ago show that the optimism of markets is not always to be trusted. It was only in the last week of July 1914 – once Austria-Hungary had delivered its ultimatum to Serbia – that bourses woke up to the fact that the assassination in Sarajevo had the potential to lead to a war involving all the great European powers. Up until then, the death of Archduke Franz Ferdinand was seen as merely a local affair and nothing to worry about.

Still, life goes on, the weather is glorious, so we head off to the beach. 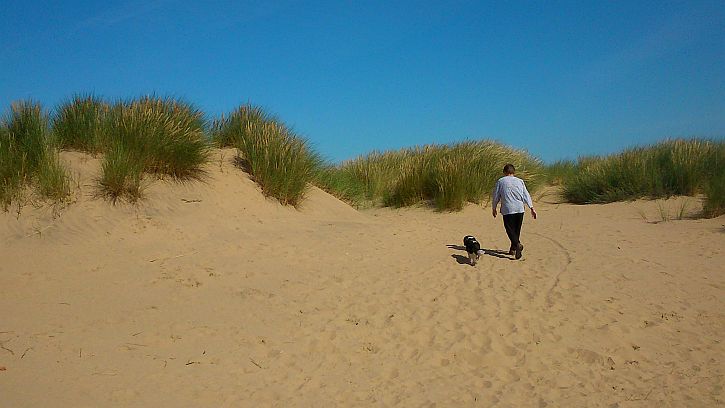 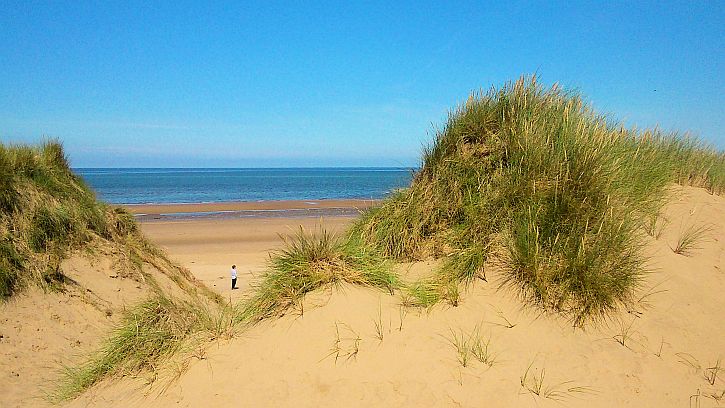 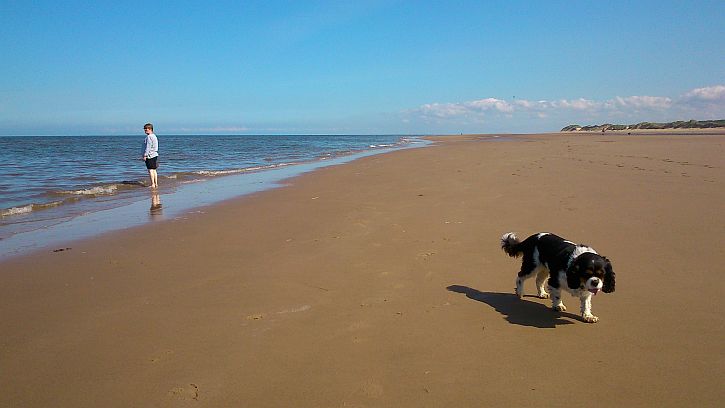 ‘Hot town, summer in the city’: we head for the beach at Formby

The thing about poppies is, they will grow anywhere. 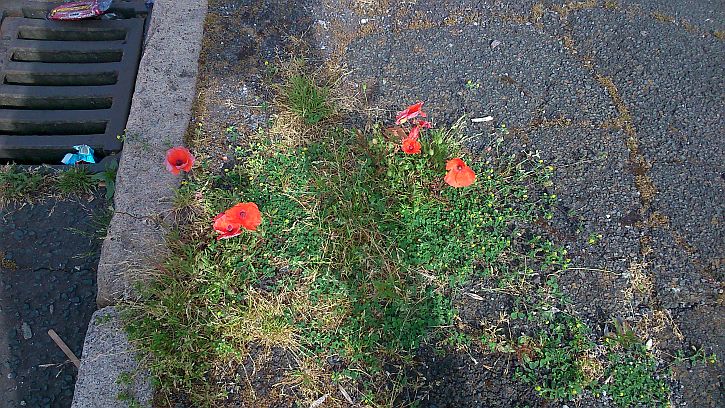