While I was in London, and it being bicentennial year, I thought I’d follow in Charles Dickens’ footsteps a little – both to learn a bit more about the man, and to see aspects of London that I’ve missed on pervious visits. So, in the next three posts I’ll describe a visit the Charles Dickens Museum at 48 Doughty Street in Bloomsbury, a look around the Dickens and London exhibition at the Museum of London, and a walk in Dickens’ footsteps through the City.

48 Doughty Street is the only surviving London house that Dickens lived in.  With his wife Catherine and their baby son
Charley, he moved here from Furnival’s Inn in Holborn in March 1837 and lived here until the end of 1839.  Two daughters (Mary and Katey) were born here and Dickens’ sister-in-law Mary Hogarth died here. The two years he lived at Doughty Street was the point at which Dickens’s career really took off.  Whilst here he completed The Pickwick Papers, Oliver Twist and Nicholas Nickleby.

After their marriage on 2 April 1836, Dickens had moved into rooms at No. 15 Furnival’s Inn with his wife Catherine, his brother Fred and Catherine’s sister, Mary Hogarth.  But this accommodation rapidly became too small and  ill-suited to his rising status, so Dickens took a three-year lease on 48 Doughty Street at a cost of £80 per annum. The house, the largest in which the young author had yet lived, comprised five floors, including a garret and a full basement.

When he lived in Doughty Street this was about as far north as built-up London extended: to the north of here was open country towards villages of Hampstead and Highgate, though the coming of the railway was contributing to a rapid expansion northwards.

It was a pleasant twelve-room dwelling of pink brick, with three stories and an attic, a white arched entrance door on the street level, and a small private garden in the rear. It was located just north of Gray’s Inn … a genteel private street with a lodge at each end and gates that were closed at night by a porter in a gold-laced hat and a mulberry-coloured coat with the Doughty arms on its buttons.
– F Kaplan, Dickens: A Biography

This is how Peter Ackroyd describes the move to Doughty Street in his biography, Dickens:

It was a pleasant house of the last century, situated in a private road with a gateway and porter at each end.  He had borrowed money from Richard Bentley in order to pay for such things   as moving expenses and, at the  time it struck him as a ‘. . . frightfully first-class Family Mansion involving awful responsibilities”. It was indeed larger than anything in which Dickens had ever lived before – a twelve-roomed house on four floors, for which relatively large edifice Dickens also employed a cook, a housemaid, a nurse and, eventually, a
manservant called Henry. So far had the young author already come. His study was on the first floor, at the back of the house, overlooking the garden. On the floor above were two bedrooms, in one of which Mary Hogarth seems often to have slept, on the ground floor there was the dining room and back parlour.  The drawing room, where the family would often sit, was next door to Dickens’s study. It is difficult now to evoke the living presence of the house, although it is clear that at once it was given several Dickensian touches – the woodwork was painted pink, a veined marble hearth was brought in, a complete set of ‘standard novels” was purchased to furnish his study, and bright flowered carpets introduced. 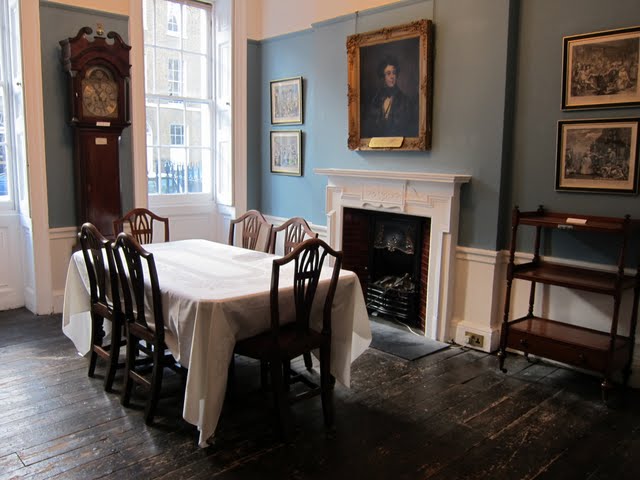 Dickens didn’t stay here long: he soon required more space for his growing family and moved to 1 Devonshire Terrace in 1839. The house remained a residential property, but was threatened with demolition in 1823, when the Dickens Fellowship acquired it. The Museum was opened in 1925 and now holds the most important collection of paintings, rare editions, manuscripts, original furniture and other items relating to the life and work of Dickens.

Ten people, including four servants lived in the house when Dickens owned it.  It’s tall, with rooms spread over four floors, but most of the rooms are not particularly large, and looking at the scullery (below), I wondered how all the cooking got done because Ackroyd says that Dickens ‘gave dinners and entertained his friends … on so grand a scale … that some people believed that he was spending money too lavishly, even for a so young and successful an author’.  I expect that most of the laundry was sent out, and maybe the dinners were prepared off the premises, too?  The dining room (above) is the first room you enter.  I’m not sure to what extent the furnishings are as they were when Dickens was here, although the sideboard is the original which followed the Dickens family from London to Gads Hill. On display is an old photograph of it in situ at Doughty Street. 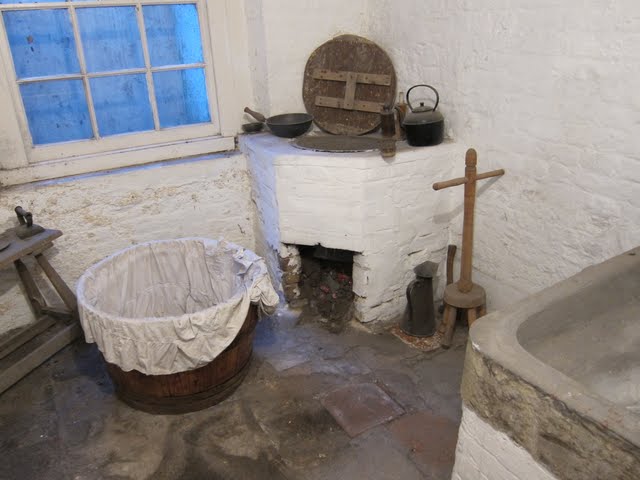 The most atmospheric exhibit in the house is the actual desk that the teenage Dickens used when he worked at the law office of Ellis and Blackmore of Holborn Court, Gray’s Inn, as a junior clerk from May 1827 to November 1828. The surface of the desk has many initials, carved no doubt by bored clerks, including what appears to be a heavily scratched out ‘Charles Dickens’ (below). Having learned shorthand in his spare time, Dickens left to become a freelance reporter. 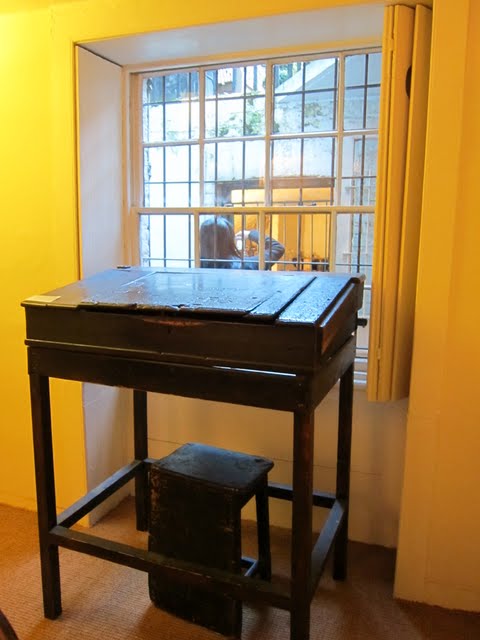 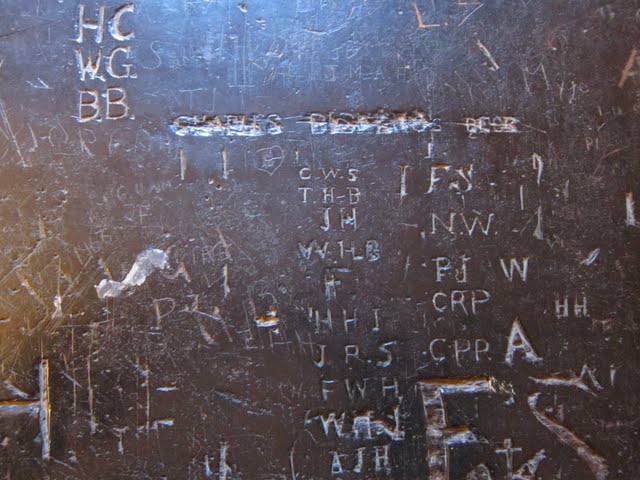 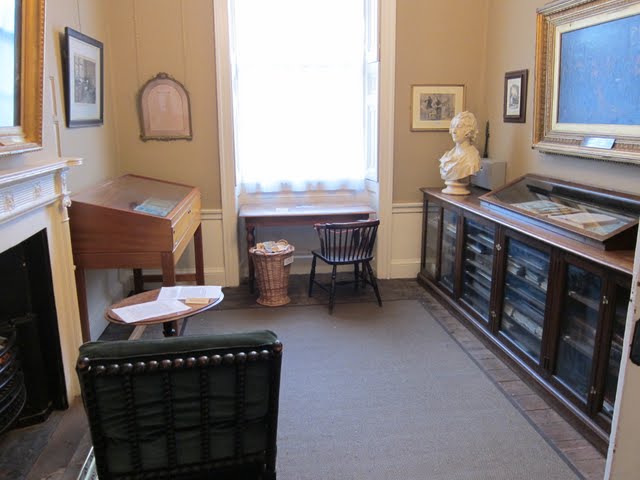 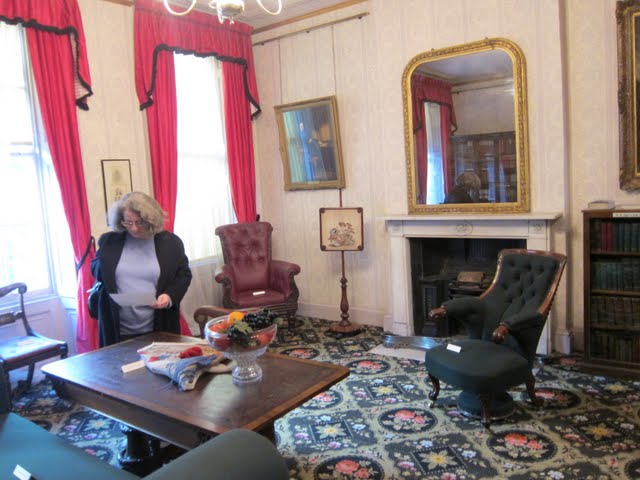 The drawing room (above). A third floor bedroom (below).

The Dickens family left Doughty Street for a larger property in Devonshire Terrace near Regent’s Park at the end of 1839.  From there, they moved to Tavistock House in Tavistock Square, where a blue plaque commemorates Dickens’ residence at this site from 1851-60. This was the grandest of Dickens’s London homes, with eighteen rooms, an imposing stone portico, and a carriage drive.  It was while living here that Bleak House (1852-3), Hard Times (1854), Little Dorrit (1855-7) and A Tale of Two Cities (1859) were written and Great Expectations (1860-1) was in preparation.

In its grandeur, Tavistock House testified to Dickens’ status, popularity and success in Victorian England, but is only a short distance from 4 Gower Street North, his parents’ house where as a child he had experienced poverty and shame as his father slipped into bankruptcy, forcing Charles to work in Warren’s Blacking Factory on Hungerford Stairs, near the present Charing Cross railway station, where he earned six shillings a week pasting labels on pots of boot blacking.

In 1856 Dickens bought Gad’s Hill Place at Higham near Rochester and finally moved there in 1860.