The Ancient Chapel of Toxteth

Every year on four days in September, buildings of every age, style and function throw open their doors, ranging from castles to factories, town halls to tithe barns, parish churches to Buddhist temples. It is a once-a-year chance to discover hidden architectural treasures and enjoy a wide range of tours, events and activities which bring to life local history and culture.

Today I took advantage of Heritage Open Days 2009 to take a look round Toxteth Ancient Chapel which is located on a busy junction at the bottom of Park Road in the Dingle, but which dates back to 1618, when it was a haven for Dissenters settled in the wilds of Toxteth Park. 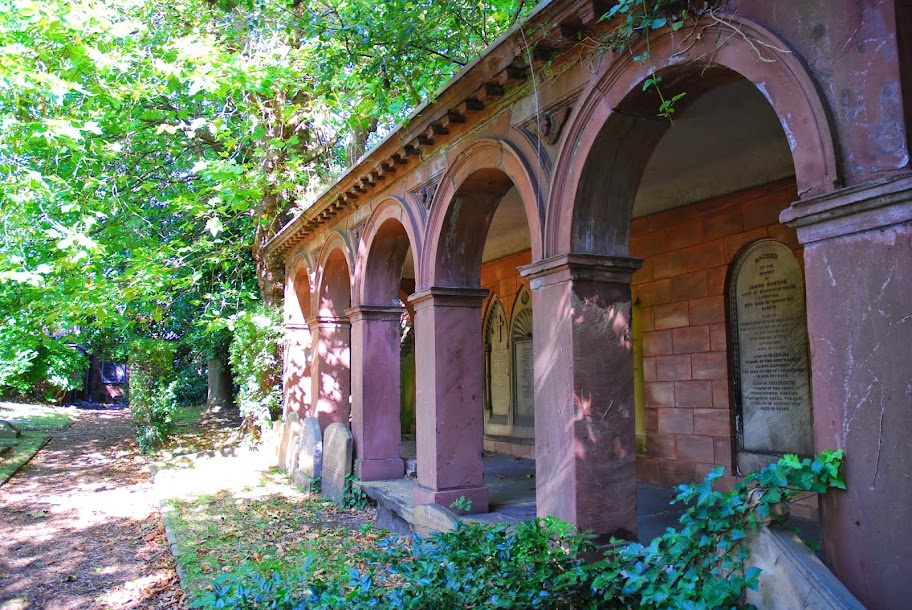 This tiny chapel is a Grade I Building. Toxteth Unitarian Chapel is popularly known as the Ancient Chapel of Toxteth,  Once Park Road was just a track leading to Toxteth Park, a royal hunting park since the 13th century. Late in the 16th century the Crown sold the land to the Earl of Derby, who in turn sold it to Richard Molyneaux. He allowed Puritans escaping persecution to occupy land in the former park and cultivate it. By 1611  twenty or more families  had settled here from the area between Liverpool and Ormskirk in the hope they would be able to enjoy freedom of conscience in their religious practice.

This new community wanted to establsh a school for their own children, so they built a small schoolhouse and invited Richard Mather of Lowton, near Warrington, to be the Schoolmaster.  He accepted, though he was only 13 years old. Soon he decided to complete his studies at Oxford University. In the meantime, in 1618, the chapel was built as an addition to the existing schoolhouse building –  today’s Ancient Chapel. The design of the chapel reflected Puritan values, with wooden seating, no adornments on the walls and no decorated altar. Richard Mather returned as Minister, preaching his first sermon in the newly built chapel on 30th November 1618. 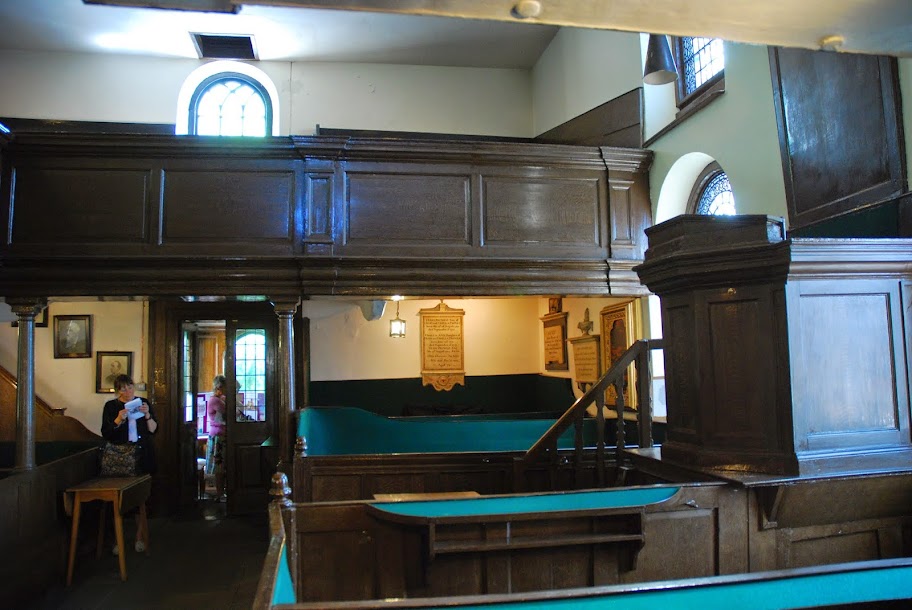 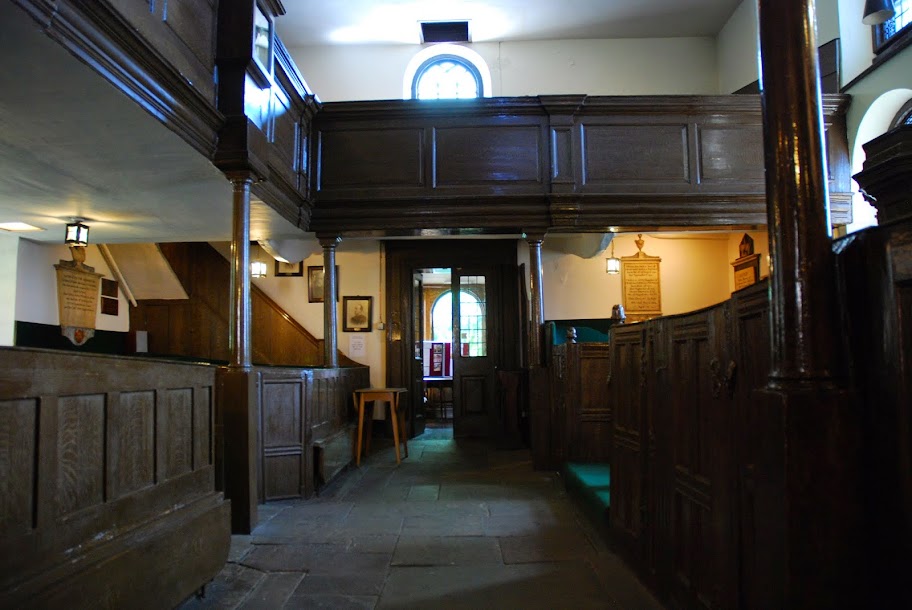 However, despite the best efforts of Sir Richard Molyneux and his family (who were Catholics, themselves subject to discrimination), the Puritans became the victims of increasing persecution. To escape from this harassment, Richard Mather left Liverpool and set sail for the New World from Plymouth with the Pilgrim Fathers. Once in America, Mather continued to preach as Minister of a Congregational Church in Dorchester, Massachusetts until his death in 1669. His son and grandson became presidents of Harvard and Yale Universities respectively.

The chapel is the oldest dissenting place of worship in the UK and, although substantially rebuilt in 1774, parts of the original walls remain. In 1840, the old schoolhouse was demolished, to be replaced by the present chapel vestibule, porch, vestry, staircase, and organ loft. 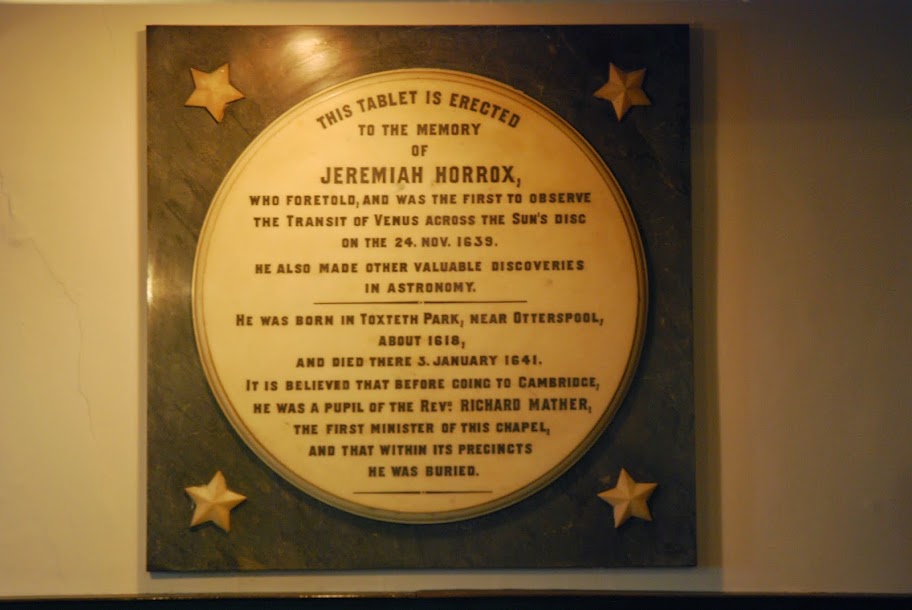 There have been a number of significant members of the Toxteth congregation and community over the years. One of these was Jeremiah Horrox (1619-1642),  who was born in Toxteth Park in 1619and lived at Lower Lodge in Otterspool Park. In 1639, Jeremiah produced a model of planetary motion, and was the first person to predict and observe the transit of Venus across the face of the sun. Amongst many other significant achievements, he calculated the distance from the earth to the sun. Jeremiah died in 1641, at the age of 23, and is believed to be buried in the chapel precincts. A monument  in the chapel  pays tribute to him. (There was an excellent BBC documentary on Horrox, broadcast a few years ago). 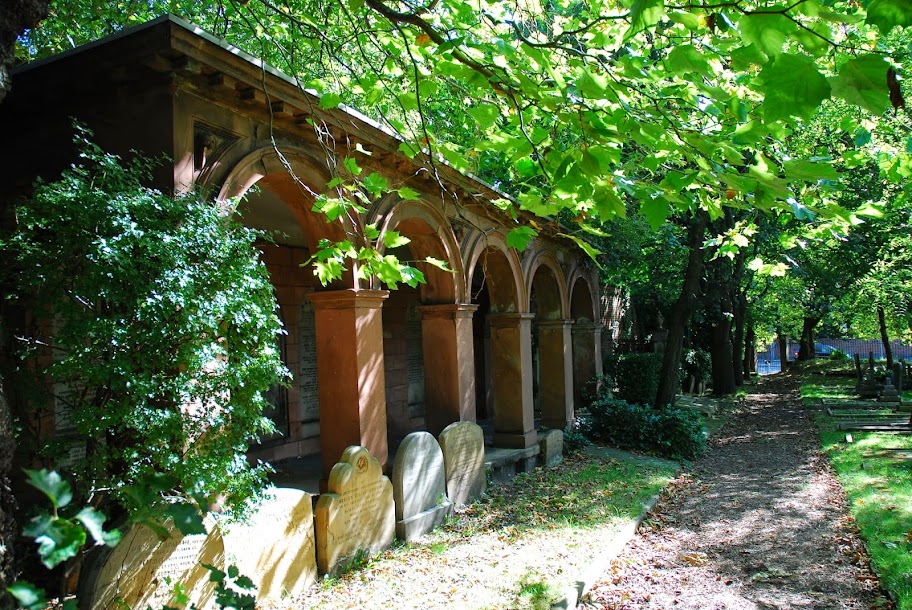 Outside there is a graveyard, which contains burials dating back to 1795. There is a colonnaded construction in the burial ground, known as ‘The Colybarium’, where the wealthiest members of the congregation were buried, including some members of the Holt and Rathbone families. 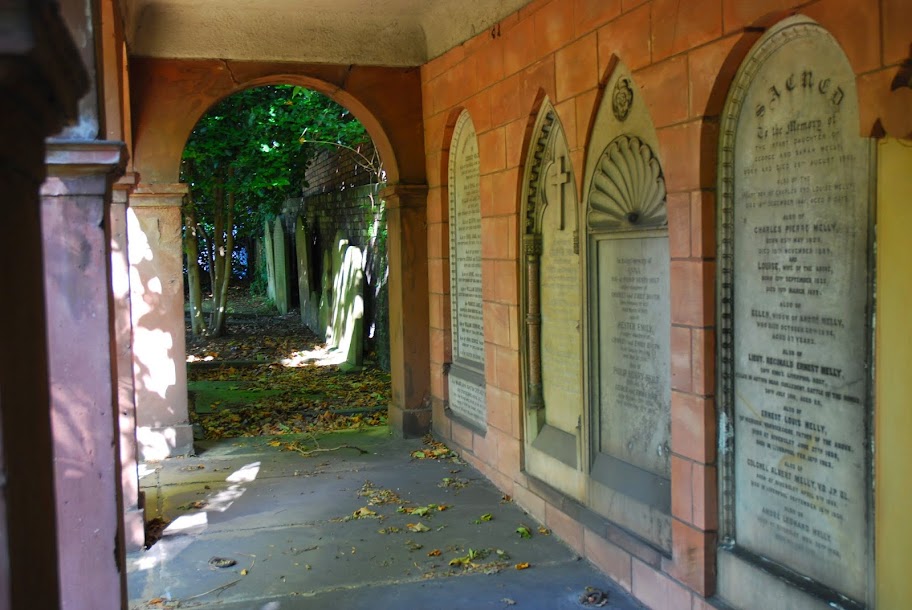 George Holt senior was a cotton broker originally from Rochdale. He married Emma Durning in 1820 who came from a rich and long-established Liverpool family. They were involved in local politics and educational and philanthropic schemes. They are both buried in the Colybarium. George Holt’s son, George Jnr, revolutionised shipping with a remarkable fleet of steam ships which became known as the Blue Funnel Line, with technologically advanced ships featuring distinctive black and powder blue funnels which made them instantly recognisable around the world.

His brother, Alfred was a marine engineer and ship-owner. In 1864, when he was in his mid-30s, Alfred developed a type of compound steam engine enabling ships to travel much further and more economically than ever before. His engineering talent and business acumen were to make him a wealthy man – he bought Sudley House in Mossley Hill, built in 1821 and eventually bequeathed to the City of Liverpool in 1944, together with the family’s collection of paintings.

The Rathbones are another prominent Liverpool family with members buried here. William Rathbone (known as William Rathbone VI) became Liberal MP for Liverpool in 1868, founded the University College of Liverpool in 1880, and then, as M.P. for Caernarvonshire, started the University of Wales in Bangor. At the top of Princes Avenue, near the junction with Upper Parliament Street, is a building which once was the first training college for District Nurses, established by William VI and Florence Nightingale. His daughter, Eleanor Rathbone, became M.P. for Combined Universities in 1929, campaigned for Family Allowances for children.William Rathbone’s  grandfather came to Liverpool in 1730, from Gawsworth, near Macclesfield and built a country house at Greenbank in 1787. The family business, which started with a sawmill, moved into the cotton trade, shipping, and merchant banking. William V was active in local politics, campaigning especially against bribery and corruption in elections. He was Mayor of Liverpool in 1837, when he laid the foundation stone of St George’s Hall. 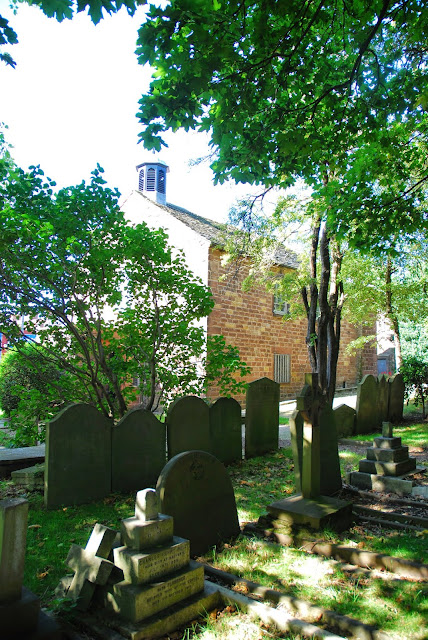 Other prominent people buried here include members of the Melly family, ancestors of George Melly, the jazz singer. George’s great-uncle, Charles Melly (1829-1888), was a benefactor to the poor of Liverpool, always giving parties for the poor and especially for children. He started sick funds and savings clubs for his workers and, in the 1860s with William Rathbone, he raised funds for Lancashire cotton workers. In 1852, local police officers told Charles that poor Irish immigrants were asking them where they could get water, as they had to drink from horse troughs. At his own expense, Melly installed taps at Princes Dock, and then 12 drinking fountains at Liverpool’s railway stations, with a further 40 being installed throughout the town.

I also photographed this memorial to Walter Holland, son of Charles and Elizabeth Gaskell Holland. Charles Holland was an offshoot of a well known family which is said to have originated at Up Holland, Lancashire, in the 13th Century, and was later to be found at Sandle Bridges, near Knutsford. His parents were Samuel Holland, a prosperous merchant living at No.126 Duke Street, Liverpool, then a fashionable residential area, and his wife Catherine, daughter of John Menzies, a Liverpool accountant. 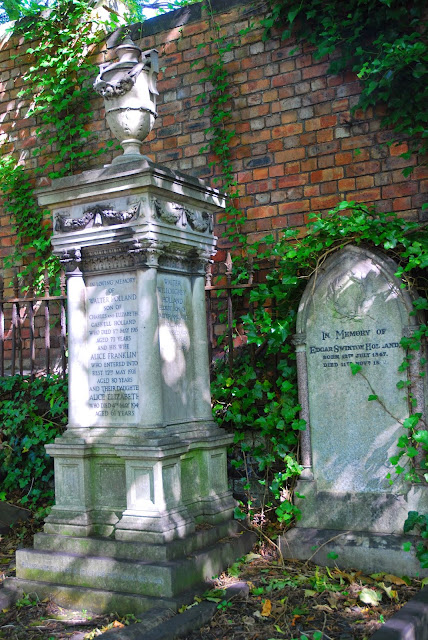 In 1844 Charles Holland, who was also a merchant in Liverpool, purchased ‘Liscard Vale House’, in Vale Park at the top end of Egremont Promenade, Wallasey. He had married Elizabeth Gaskell, daughter of a Warrington sail-canvas manufacturer. In 1832 Elizabeth’s brother William, a Unitarian Minister and Professor of English Literature in Manchester, married Elizabeth Cleghorn Stevenson, better known as Mrs Gaskell, the author of Cranford,  who was also a cousin of Charles Holland. Another cousin was Henry Holland, who spent a brief period in business in Liverpool, later studied medicine in Edinburgh, and after commencing practice in London in 1816, was subsequently appointed Physician to Queen Victoria.  In the chapel graveyard there is a memorial to Charles Holland; the inscription reveals that he died in Rome in 1870.  More details of the family links to Wallasey can be found here. 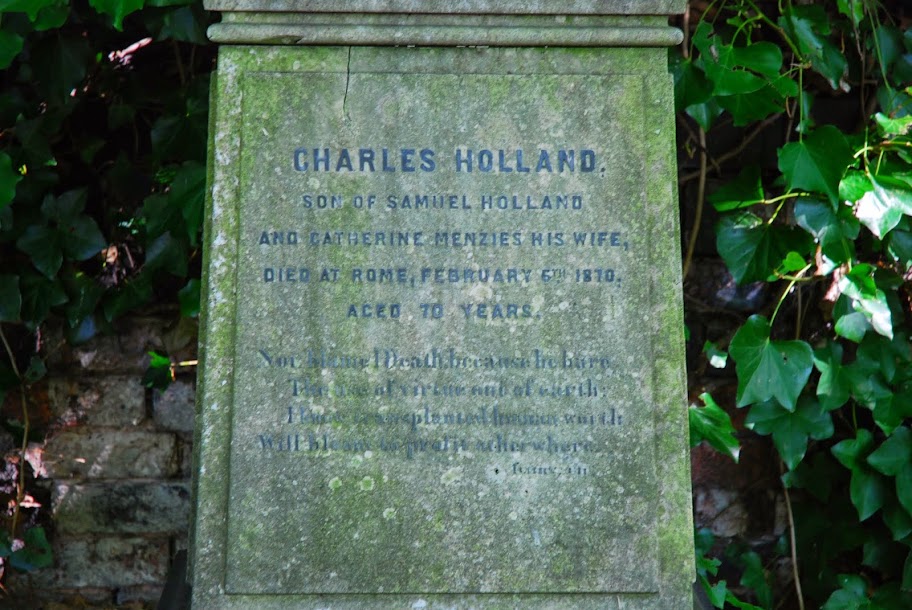 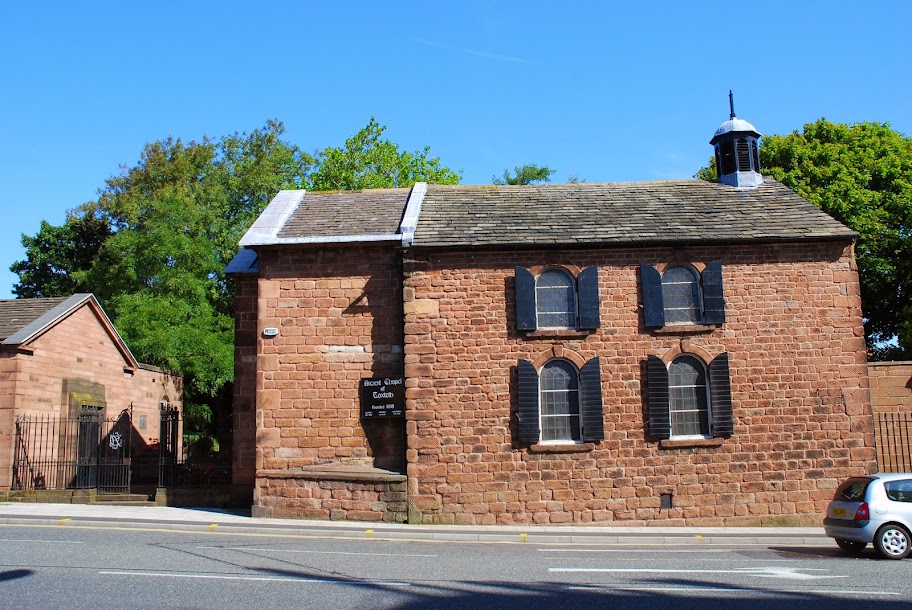 20 thoughts on “The Ancient Chapel of Toxteth”