A couple of days ago I took advantage of the Heritage Open Days to visit the Unitarian Ancient Chapel of Toxteth. Today I looked round Ullet Road Unitarian Church, another non-conformist place of worship and a grade I listed building. English Heritage describes the building as ‘one of the most elaborate non-conformist ensembles in the country’. 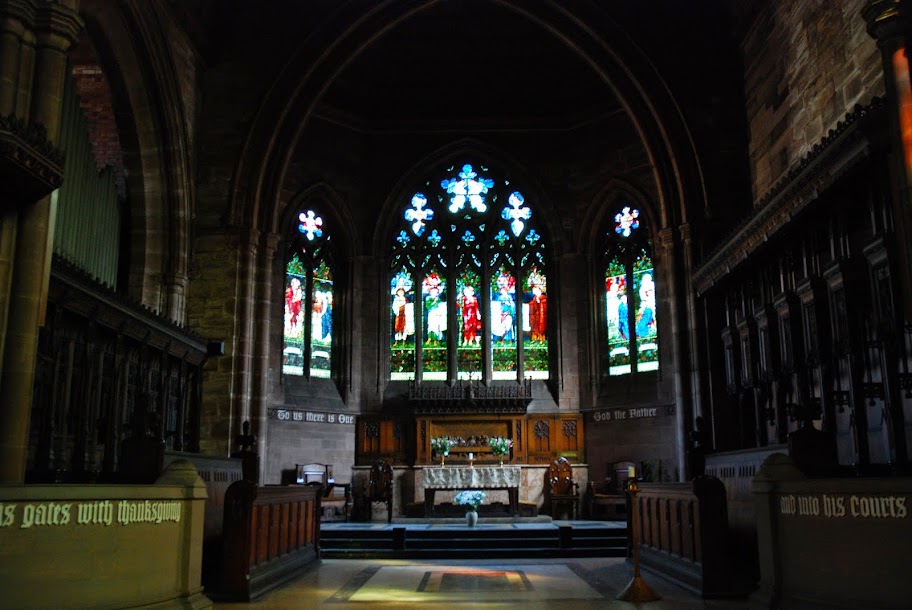 The current site is the latest of four locations. The first was at Castle Hey (now Harrington Street) in the city centre, in use from 1689 and vacated in 1727. 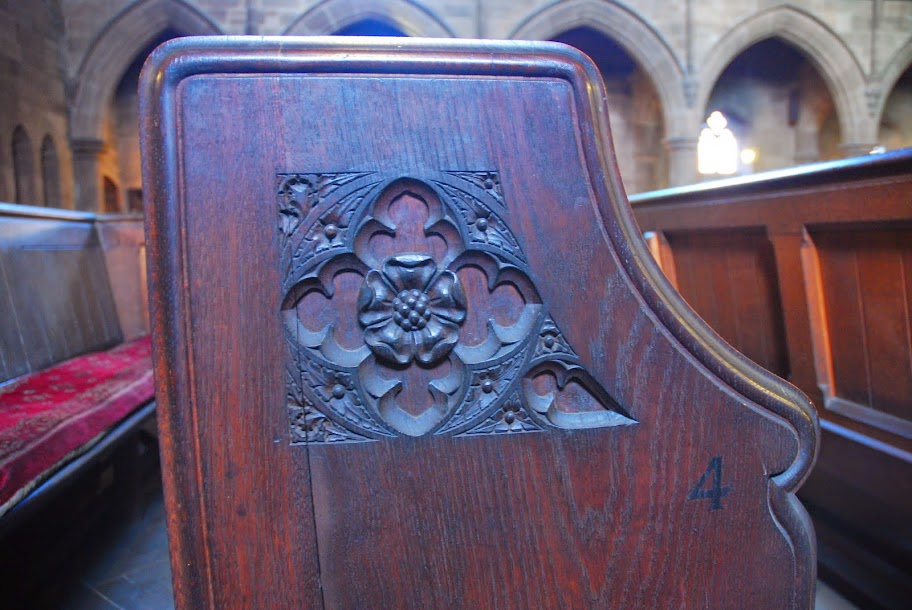 Merchants and shipowners were prominent in the congregation during the eighteenth century, some involved in the slave trade. However, through the activities of William Roscoe (1753-1831) the congregation became identified with the anti-slavery cause. In 1811 the congregation moved to Renshaw Street Chapel (where Grand Central Hall now stands). The graveyard remains as a garden accessible from Mount Pleasant. Roscoe is buried there and a monument recalls the former chapel.

William Roscoe was a leading campaigner against the Slave Trade. He wrote in his poem Mount Pleasant:

Shame to Mankind! But shame to Britons most
Who all the sweets of liberty can boast
Yet, deaf to every human claim deny
That bliss to others which themselves enjoy.

He was a lawyer, writer, poet, botanist and artist (some of his paintings are in the Walker Art Gallery). He wrote books for children, including The Grasshoppers Feast, the first book in the world to be written for children. For Paul Du Noyer, author of Wondrous Place, he is a flaneur and spirit of the counter-culture.

Towards the end of the 19th century the unitarian congregation began to think in terms of a new building more worthy of the role nonconformists were now playing in the life of the city since the repeal of legislation which had kept them out of public office. The new church at Ullet Road opened in 1899. 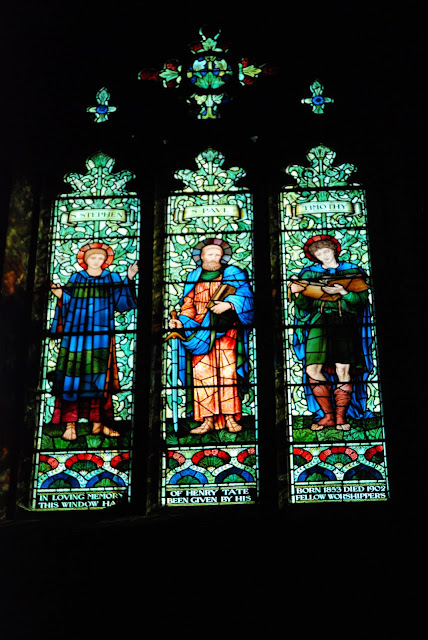 The interior contains a wealth of art nouveau. The windows for the most part are from the William Morris workshop to designs by Sir Edward Burne-Jones. The library ceiling, an elaborate allegory of the triumph of Truth, is by Gerald Moira. This extract, from The Art of Gerald Moira by Harold Watkins, explains its meaning:

“The actual work given to Moira was a decorated frieze around the Library, which he designed, modelled and painted entirely alone… All this took nearly three years to do. The Library ceiling represented the chief part of the work. The scheme is unconventionally allegorical, yet eminently suited to its purpose and wholly sound artistically and technically. The Earth, occupying a large portion of the ceiling, is broadly treated. Above it and in the centre is the flaming sun of Perpetual Light, his rays darting in all directions ; opposite the Earth a great figure of Time, raising into the air a beautiful woman: Truth. 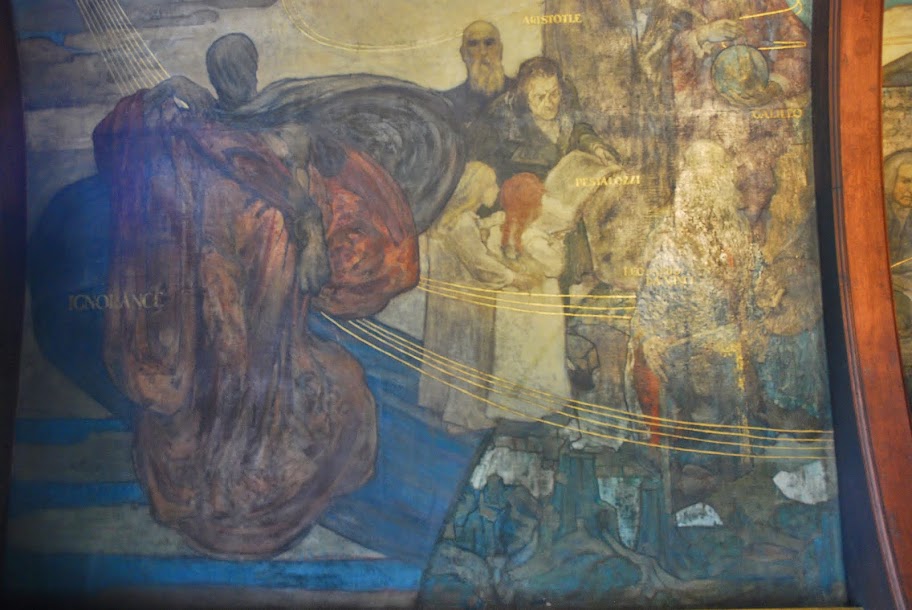 In the two hands of Truth are held respectively a lamp and a mirror. Beneath her, four figures strive unsuccessfully towards her. These are the four enemies of Truth, the cardinal vices, Ignorance, Envy, Superstition and Jealousy, from whose attacks Time now rescues her.

Grouped upon the Earth and in Space are numerous figures, some of them portrait figures and others allegorically represented, of many great men and women, important representatives of humanity in all departments of human activity, irrespective of creed or country, who look upon the triumph of Truth assisted by Time, Light and Knowledge, a triumph towards which all of them in their own lives have laboured unceasingly. Among them are David, Moses, Solomon, Plato, Aristotle, Homer, Dante, Shakespeare, Milton, Faraday, Newton, Phidias, Gallileo, Leonardo da Vinci, and many others. Following an old tradition of mediaeval and Renaissance painters Moira included also the donor, Sir John Brunner, among them. 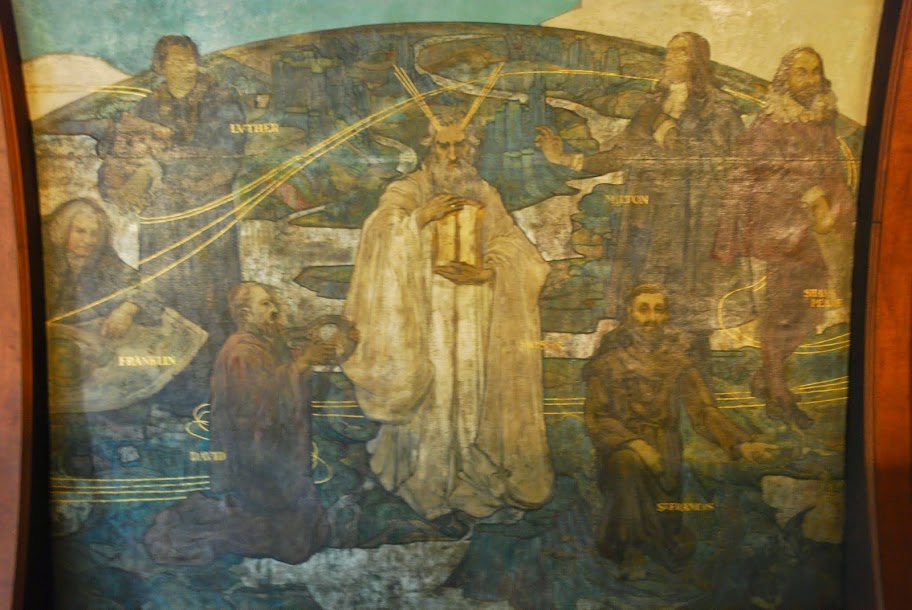 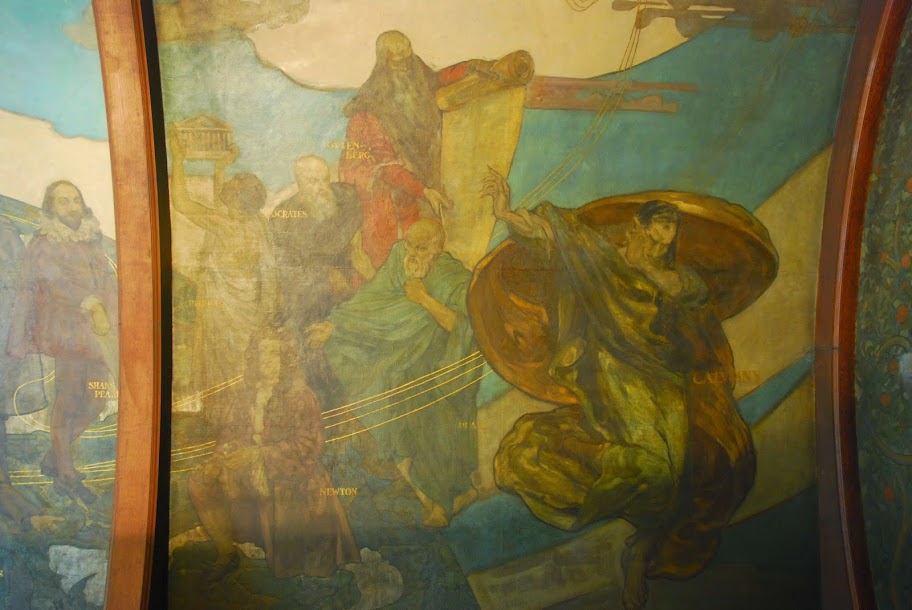 Dark clouds interrupt the beneficent rays of Light in Space, and rocks break up an otherwise smooth and lovely sea. From the lamp grasped in the hand of Truth long slender lines curve and curl gracefully about all these figures, binding and connecting them and signifying their common destiny and purpose. 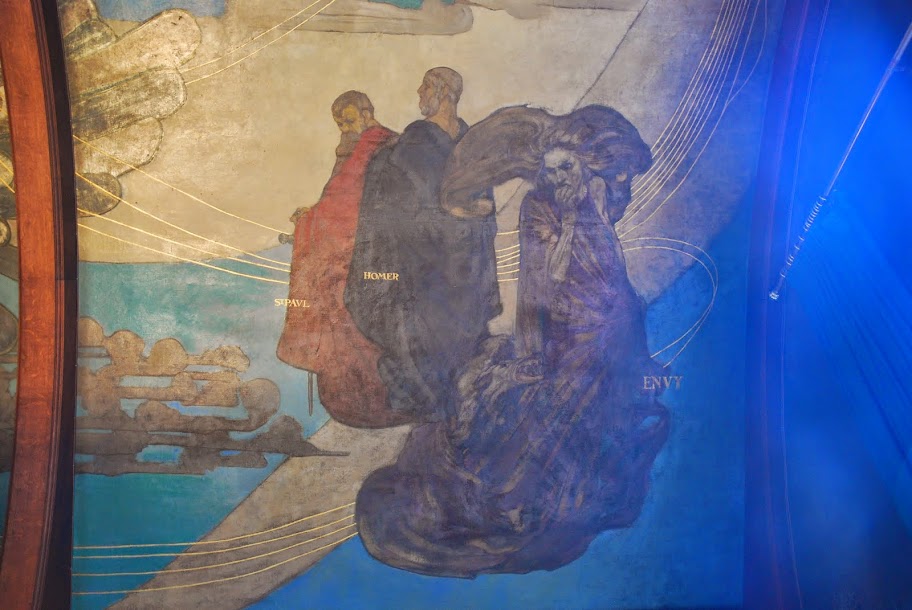 This ceiling is wonderful in its conception and brilliant in its execution ; rich in its painting and universal in its appeal ; a sermon and a parable as befits a Church ; a thing of beauty as befits a splendid building.” 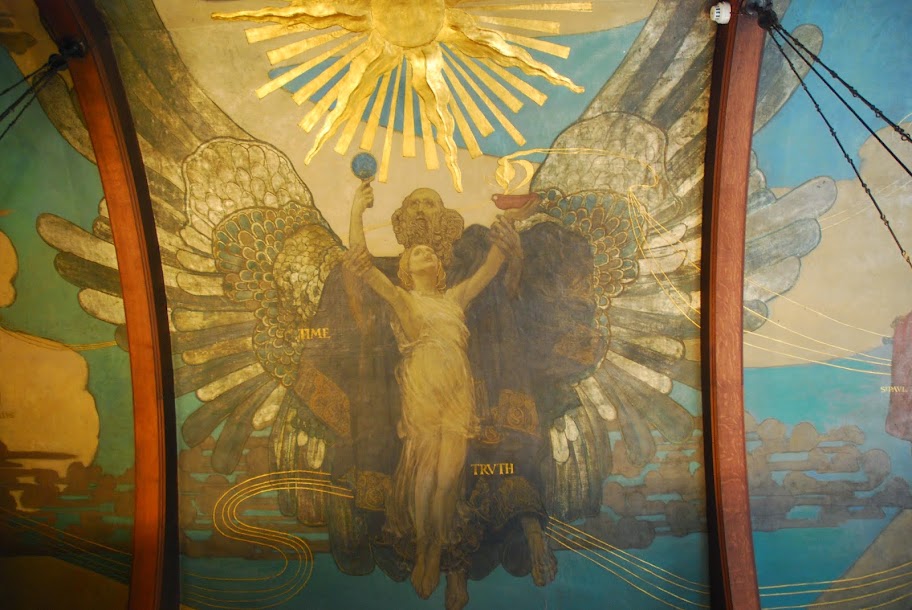 The money to have the interior of the church lined with sandstone was provided by the Holt family, whose wealth came from shipping. The Tate family provided the choir stall canopies through donation and Sir John Brunner of Brunner-Mond, later ICI, commissioned the ornate ceilings of the vestry and library. 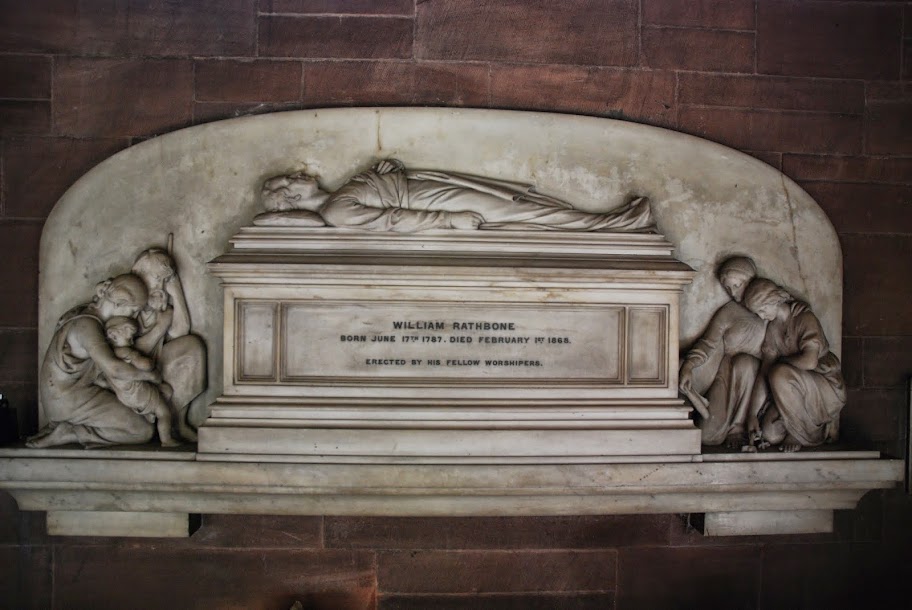 The windows and cloisters contain memorials to many unitarians prominent in Liverpool during the 19th and 20th centuries, including Sir Sydney Jones, Lord Mayor of Liverpool 1939-1943; various members of the Holt and Booth families, the Liverpool ship owners; Henry Tate, founder of the sugar firm; William Rathbone, the founder of District Nursing and leading campaigner for the establishment of Liverpool University. 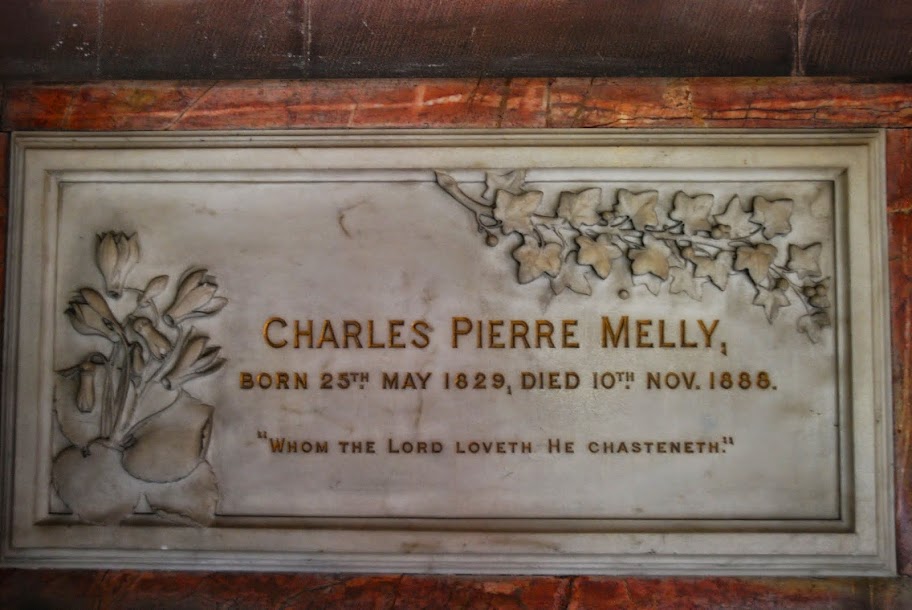 Another memorial is that of Charles Pierre Melly, great uncle of George Melly. Charles Pierre Melly (1829-88) was born in Tuebrook to a Swiss father and English mother, and is remembered for his scheme to provide free drinking fountains for working people. The first was opened in 1854 – a granite drinking fountain at the south end of Prince’s Dock. Melly went on to spend hundreds of pounds of his own money providing much-needed free water across Liverpool. He also introduced wayside benches, opened playgrounds and started the first gym in Myrtle Street.

More photos of the Melly fountains can be viewed here.