I must have walked past the narrow, gated alleyway on Arundel Avenue a thousand times before I even noticed it.  When I did, and saw the small plaque which explained that beyond the gate there lay a Quaker Burial Ground, I never imagined so large a space lay down the narrow passage. On Sunday, as the result of a community project supported by the local residents association, TANN and the Liverpool Quakers, I went along to the grand opening of the burial ground as a ‘community orchard and wildlife garden’. What I discovered was, in the words of the leaflet being handed out by volunteers, ‘a secret garden hidden from view.’ 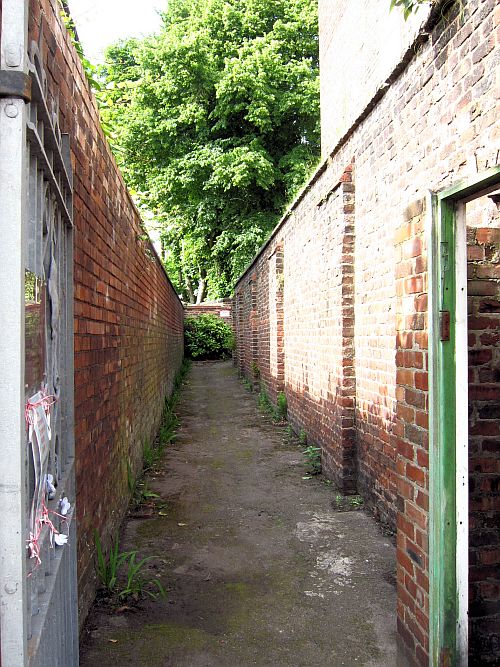 The size of the space that opens before you as you turn the corner at the top of the alley (above) is surprising, extending to the rear of Arundel Avenue on land that is bounded by the new housing on Bethel Grove.  When I arrived there was a healthy crowd of locals and other interested parties strolling around the garden and enjoying on the food and drinks laid on by the organisers.  The  aim of the project is to turn the space into an informal garden and orchard, encouraging wild flowers and wild life. What was already apparent was the progress the volunteers had made clearing and tidying the site, creating a pond, and planting fruit trees and wild flowers among the gravestones. 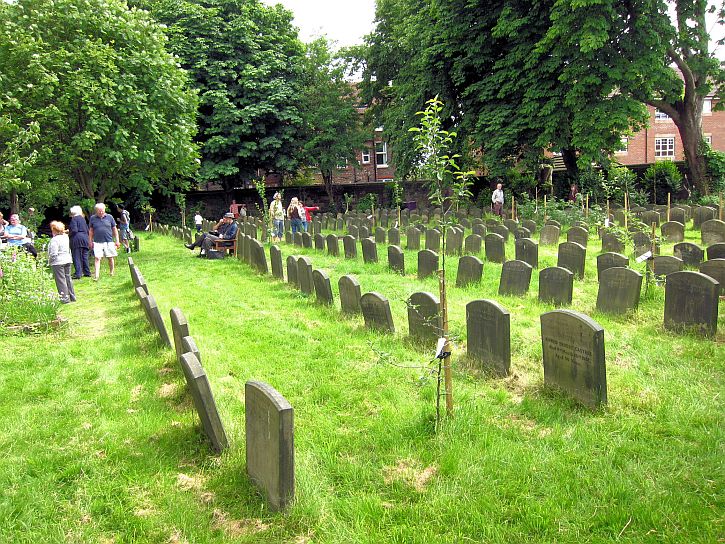 Scenes from the opening of the new community garden

There have been Quakers in Liverpool since soon after George Fox, a young livestock dealer in Leicestershire founded the community in the 1640s, during a period of religious upheaval in England as people questioned the established church and sought new ways to understand Christianity. Fox and others encouraged people to be guided by their own direct, first-hand encounter with the Spirit – without the need for priestly intervention. Other sects read their New Testaments and tried to model their churches on the church as it had been set up by Jesus and as it existed in the first century. The church that arose from Fox’s preaching was very different: no priests or ordained ministry, no creeds or sermons, no baptism or Eucharist, no liturgy. Fox wrote:

As I had forsaken all priests, so I left the separate preachers also, … for I saw there was none among them who could speak to my condition. 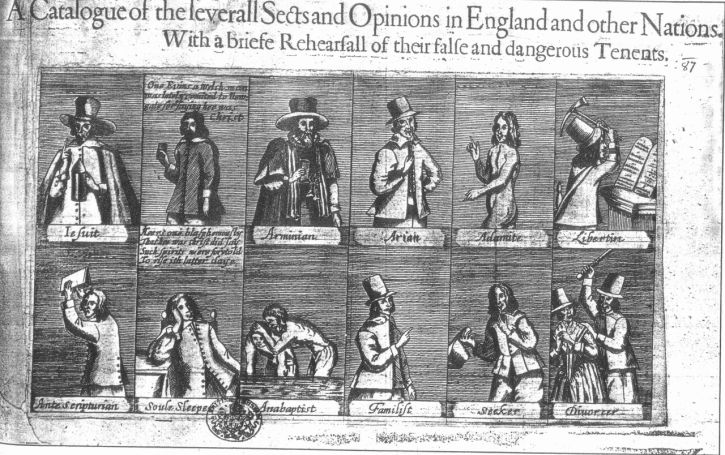 A broadsheet catalogue of dissenters in 1647

One of the fundamental beliefs of Quakers is that ‘there is that of God in everyone’- which implies no discrimination on grounds of gender or sexuality, youth or age, race, ethnicity, nationality or religion. Quaker beliefs have led to their prominence in anti-war and environmental movements.  In Liverpool, from the 1780s onwards, men like John Rutter and William Rathbone IV were members of the ultra-liberal Liverpool Literary Society, whose members supported the French Revolution, Parliamentary reform, the abolition of slavery, peace with France and the reform of local government in Liverpool – all highly unpopular with majority opinion in the city. Rutter founded the Medical Institution on Mount Pleasant for disseminating medical knowledge, and the Athenaeum Club on Church Street for businessmen.

The earliest record of an attempt by a Liverpudlian to discourage the slave trade originated within the Quaker community. In 1787, when the British abolition movement began, the Liverpool slave trade was the largest in the world. Liverpudlians, therefore, reacted negatively to the abolition movement, which they viewed as a threat to both the local and national economy. By 1788, the immense popular support generated by the abolition campaign left Liverpool isolated in its defence of the slave trade. Liverpudlians, however, were not unanimous in their support of the slave trade’s continuance. In 1787 and 1788, a small group of rational dissenters, known as the Roscoe Circle, anonymously contributed to the abolition campaign from Liverpool. The group’s namesake, William Roscoe, went on to be elected Member of Parliament for Liverpool in 1806, and in March 1807 he voted in favour of abolishing the slave trade along with 282 other MPs, against just sixteen, including Liverpool’s other MP.

In 1791 the Liverpool Quakers built themselves a new Meeting house on Hunter Street (now the dual carriageway behind Central Library), where Quaker burials took place until 1854, when the Meeting received an order forbidding it to make any more burials in a densely-populated area on public health grounds.

This was when the burial ground now accessed from Arundel Avenue was established – on land that had a frontage of 80 yards on Smithdown Lane (as it was then known) and extending back for about 100 yards. The Quakers had raised the money to pay for the burial ground by selling a previous Meeting house and burial ground which they still owned in Hackins Hey in the old part of Liverpool between Dale Street and Tithebarn Street. All the human remains were removed and reburied on the new site. In 1861 a new Meeting house to seat 200 people was built on the new burial ground, and a caretaker was installed in a cottage to look after the building and grounds.

Interestingly, according to this article on the TANN website, in their earliest days of the Quaker movement, they did not mark their graves in any way. Later, Friends allowed the use of gravestones laid flat over the grave. In 1864, the committee in charge of the burial ground on Arundel agreed that vertical headstones would be allowed – but they must all be of exactly the same shape and size, with inscriptions in identical script that gave only the name of the deceased, their age and date of death.

in 1906 the Quakers sold half of the site that fronted on Smithdown Road to the Guardians of the Poor of Toxteth Park who wanted to expand the Smithdown Road Workhouse (which later became Sefton General hospital), leaving the burial ground as it is today. By the 1950s the graveyard had become filled to capacity and the last burial took place in 1961. In 1977 an electrical fault caused a fire which destroyed the Meeting House. 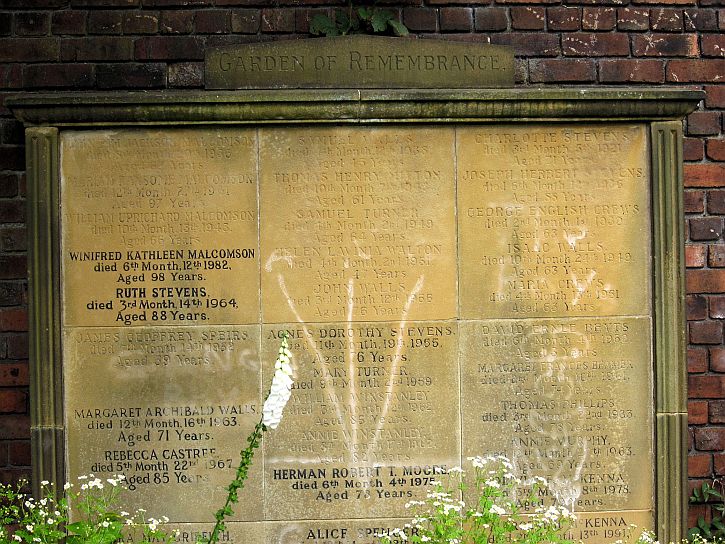 Now, with its rows of identical gravestones it is a typical Quaker graveyard of its period and will be maintained as a site of historical interest – now serving a new function as a wildlife garden for the local community.