Out of the Darkness: Remembering the Liverpool May Blitz at St Luke’s

There’s a ruined church in Liverpool city centre; only the husk of the building remains, lacking roof and windows, bombed and burnt out on the night of 6 May 1941 during the Luftwaffe’s May Blitz on Merseyside. Last night I joined crowds outside St Luke’s church to see a sound and light show – Out of the Darkness – transform the bombed-out church to mark the 75th anniversary of the May Blitz.

Since the war, St Luke’s – known affectionately as the ‘bombed-out church’ – has been preserved as a living memorial – to the people of Liverpool who lost their lives in the blitz, and, I think, to the futility of war that can do such things to a city. I only came to Liverpool as a student in the sixties, but St Luke’s has always exercised a strong pull on my emotions as I get off the bus at the bottom of Leece Street. There it is, bold and matter-of-fact, a statement about history and stupidity thrust in the faces of citizens, day in, day out. In a curious kind of way, that has felt right.

The incendiary device that almost destroyed St Luke’s fell at around midnight. Photographs of the aftermath show the hands of the clock on the bell tower that faces down Bold Street had stopped at 03.36 when the fire reached the upper part of the tower. The clock and its workings crashed to the floor of the tower in the fire, along with the church bells.

Last night, for an hour, Out of the Darkness beamed images onto large screens placed in the windows of St Luke’s facing Hardman Street in a rolling ten minute film that told the story of the May Blitz through first-hand accounts of its seven terrifying nights and archive footage, accompanied by the sound of air-raid sirens and exploding bombs. More educational than spectacular (rightly, I think), the presentation was a thought-provoking reminder of a terrible moment for the city that also spoke of people’s resilience in the face of destruction and death.

Before the show, thousands of stained-glass lanterns (echoing the stained-glass windows of the church which shattered and melted in the inferno on the night of 6 May 1942) were illuminated in in the gardens of St Luke’s. The lanterns had been created by children in schools across Merseyside. 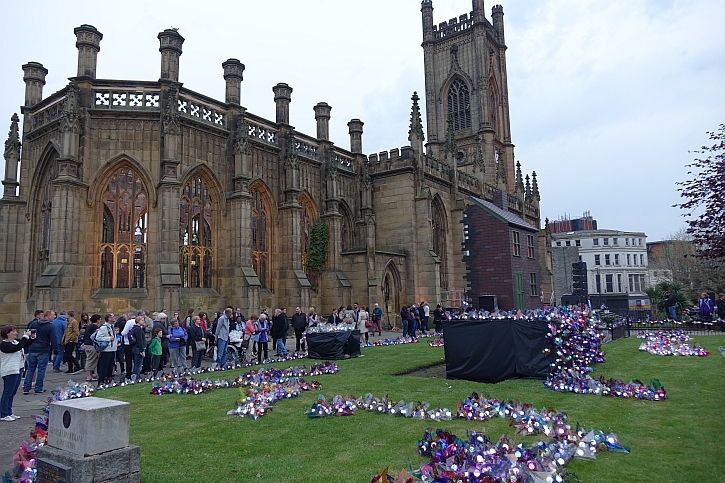 The burnt out shell of St Luke’s serves as a constant reminder, as Liverpudlians go about their daily business, of how Liverpool was the most heavily-bombed British city outside London, with nearly 4000 killed and a further 7,000 seriously injured during the bombing raids which began in August 1940 and continued through till May 1941. Over  half of the dead and injured were casualties of the May Blitz.

Recently, an extraordinary collection of photos taken by Liverpool police officers of the aftermath of the Luftwaffe bombing raids were discovered in an unmarked envelope in the archives of Merseyside Police. Look at the images from the Liverpool City Police archive compiled in these two YouTube videos and, in 2016, as the brutal war in Syria grinds on into its fifth year, you cannot help thinking of Aleppo.

Liverpool was a prime target for the Luftwaffe because it was at the end of an Atlantic lifeline: every week, ships arrived in the Mersey bringing supplies of food and other cargoes from North America, the Caribbean and Latin America. Without these supplies, Britain would have lost the war. The bombing was aimed mainly at the docks, railways and factories, and large areas were destroyed along the docks and around the city centre, causing massive damage.

Half of the Liverpool docks were put out of action, railways and tram lines badly damaged, and many dockside neighbourhoods reduced to rubble. Several ships were sunk in the docks and river, and some of the city’s best-known buildings were destroyed, including the Customs House, the Cotton Exchange, the Rotunda Theatre and Lewis’s department store. The City Museum (now World Museum) and Central Library and their fine collections were also badly damaged.

Gallery: Out of the Darkness 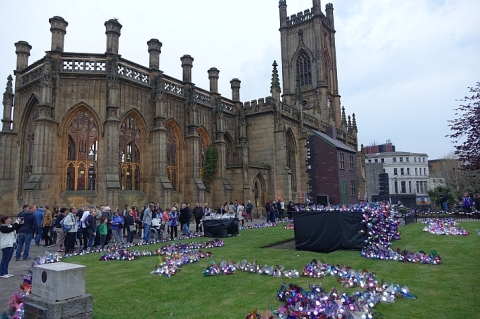 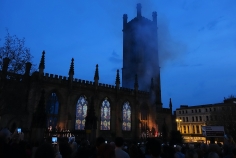 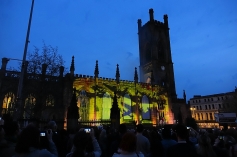 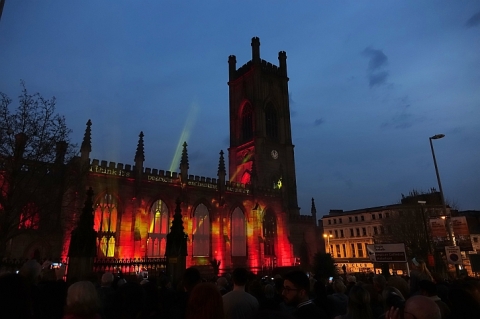 The thought going through my mind as I watched Out of the Darkness was how war with Germany now seems unthinkable, even though Britain went to war with Germany twice in thirty years (while for France it was three times in 70 years). Why should that be so? To me, a large part of the answer lies in the post-war process of European integration that led ultimately to the European Union.

It’s notable that the Remain campaign in the current referendum concerning continued British membership of the EU makes no reference to the historical circumstances that led to creation of the EU. The focus of all the debate seems to be immigration – and whether we’d be better off in or out.

What seems forgotten is what lay behind the bombers arriving over Liverpool 75 years ago – how, in the twentieth century, Europe came close to destroying itself. While World War I cost more than 8 million European lives, in World War II more than 18 million Europeans died in battle, civilian bombing, and in the systematic Nazi genocide of the Holocaust.

The idea that Europe’s warring nations should turn their back on destructive nationalism, pool their resources and share power emerged out of the wartime Resistance movements, as a response to the catastrophe that nationalism had wrought on Europe.

In 1945 Europe lay in ruins.  50 million soldiers and civilians had lost their lives in a conflict that dwarfed even the First World War in its level of death and destruction.  But, whereas World War 1 exacerbated nationalism and ideological extremism in Europe, World War 2 had almost the opposite effect.

People in different parts of Europe began to dream of a different kind of Europe.  Many were from Europe’s linguistic and political borderlands – Schuman from Lorraine, Adenauer from the Rhineland, De Gasperi from northern Italy, Spaak from bilingual Belgium. Europe’s diversity helped foster its impulse to unite.

Within five years of the end of the war, the French foreign minister Robert Schuman, prompted by Jean Monnet, proposed to Germany the first practical move toward European unity, and the West German Chancellor Konrad Adenauer agreed.  Six countries originally rallied to the concept of a united Europe; now there are 28.

Coincidentally, this week will see Europe Day marked across the European Union (though in the UK only in Scotland, as far as I can tell), an annual celebration of European peace and unity. The date marks the anniversary of the historical Schuman declaration. At a speech in Paris in 1950, Robert Schuman, the then French foreign minister, set out his idea for a new form of political cooperation in Europe, which would make war between Europe’s nations unthinkable.

His vision was to create a European institution that would pool and manage coal and steel production. A treaty creating such a body was signed just under a year later. Schuman’s plan was the beginning of what is now the European Union.

And, though the majority in the Conservative party today favour Brexit, back then their iconic leader Winston Churchill was firmly in favour of European integration (though admittedly, not Britain’s involvement). Addressing a huge crowd in Strasbourg’s Place Kleber, on 12 August 1949, the first day of the first session of the Consultative Assembly of the Council of Europe, he said these words (warning the French crowd at the outset, ‘Beware! I will be speaking in French!’) :

In this ancient city still scarred by the wounds of war, we are meeting to set up an assembly which we hope will one day be the parliament of Europe. We have taken the first step and it is the first step that counts. […]

We are meeting here in this new Assembly not as representatives of our different countries or different political parties but as Europeans marching forward, hand in hand, if necessary shoulder to shoulder, in order to revive the former glories of Europe and enable this illustrious continent to regain in a world organisation its place as an independent member, able to look after itself.

That primary and sacred fidelity which everyone owes to his own country is not difficult to reconcile with this broader feeling of European camaraderie. On the contrary, it will be found that all legitimate interests ally harmoniously and that each of us will serve our countries’ real interest and security better if we broaden our feeling both of common citizenship and sovereignty. And if we encapsulate in that feeling the whole of this continent of states and nations which share the same way of living.

Many years later in 1990, as the Cold War division of Europe crumbled, Vaclav Havel, who had been a leading dissident in Czechoslovakia during the Communist years and then became President after the Velvet Revolution of November 1989, spoke these words:

All of us … thought about freedom and injustice, about human rights, about democracy and political pluralism, about market economics and much else besides.  Because we thought, we also dreamed.  We dreamt, whether in or out of prison, of a Europe without barbed wire, high walls, artificially divided nations and gigantic stockpiles of weapons, of a Europe free of “blocs”, of a European policy based on respect for human rights…

In June 1995 as the war in Bosnia raged, Vaclav Havel speaking at the Council of Europe, made these observations which I believe are pertinent to where we find ourselves in the Europe of 2016:

Dark forces of tribal hatred lie dormant in many quarters. If we let them get the upper hand in one place, they will begin to awake in many other places as well. We must not allow this to happen at the very moment when Europe has, for the first time ever in its history, a chance of building its political order on the principle of peaceful coexistence and cooperation on a footing of equality among all its nations, on the principles of democracy, respect for human rights, the rule of law and civil statehood. Europe – like the whole world today – finds itself at a crucial historical crossroads.  It shall either succeed in embracing a new sense of responsibility … or it shall again commit the same fatal error for which it paid such a terrible price twice before in this century – the error of closong its eyes to the emerging evil of nationalism which, like any evil, is contagious.

It’s as if there were two great moments in recent European history: the first when Schuman, Monnet and others saw the possibility of Europe overcoming its terrible 20th century history, and the second when the Berlin Wall came down. Moments, as Seamus Heaney expressed it in 1996 in The Cure at Troy, when ‘hope and history rhyme’:

History says, ‘Don’t hope
On this side of the grave.’
But then, once in a lifetime
The longed-for tidal wave
Of justice can rise up,
And hope and history rhyme.

So hope for a great sea-change
On the far side of revenge.
Believe that a further shore
Is reachable from here.
Believe in miracles
And cures and healing wells….

4 thoughts on “Out of the Darkness: Remembering the Liverpool May Blitz at St Luke’s”