It’s easy to see why the reviews have likened Marshland, the Spanish noir directed by Alberto Rodríguez to the first season of True Detective. The film opens with a title sequence comprising stunning aerial shots of the marshes that provide the story’s setting before plunging down into the terrain and introducing the two detectives sent to this remote area of southern Spain to investigate the disappearance (soon revealed to be the brutal murder) of two teenage sisters.

The photography –  reducing the landscape of the Guadalquivir wetlands to twisting patterns that resemble the human brain- evokes parallels with the atmospheric landscapes of the Louisiana bayou shot by Cary Fukunaga and Adam Arkapaw for the first True Detective, while the partnership between two mismatched detectives recalls the memorable pairing of Matthew McConaughey and Woody Harrelson in TD1.

However, Marshlands can stand in its own right as a powerful thriller with a relentless narrative drive and strong sense of time and place. The time is 1980, a critical moment in Spain’s move from the Franco dictatorship to an emerging democracy: a turbulent time of strikes and the flowering of cultural freedom, but with the attempted coup d’état by the Francoist Colonel Tejero only a year away. Rodríguez satturates his film with a sense of two worlds – old and new – colliding.

The place is the Guadalquivir marshland in remote Andalucia, south of Seville. We see first from above it in those opening shots: a twisting myriad of inlets and rivulets where rice is cultivated on land that seems to dissolve into water – literally so in the climactic scene that occurs in torrential rain.

The two detectives have been called from Madrid to investigate the disappearance of the two teenage girls, only to meet with local suspicion and obstruction, while the pair view one another with almost as much mistrust as the locals. Politics lies behind everything: the younger of the two detectives, Pedro (Raúl Arévalo), represents the liberal values of the new Spain, while Juan (Javier Gutiérrez) is a hard man with a dark past serving the Franco regime. Meanwhile, in Andalucia’s deep south, the feudal attitudes and corruption of the old regime linger. In one scene, the camera lingers on images of Franco and Hitler still on display in Pedro’s hotel room alongside a crucifix.

The investigators struggle to probe the code of silence, pursuing leads and red herrings along the bewildering maze of waterways and dirt tracks that thread through the marshes. Rodríguez populates the mystery with unique characters: the teenagers’ sullen father, their maltreated mother who yields up half-burnt negatives of the girls half-naked at some mysterious assignation, and Jesus, the poacher who knows every inch of the marshes and whose help the detectives enlist.

Cinematographer Alex Catalan reinforces the strangeness of the characters with shots of the marshes that underline the isolation and claustrophobia of a place filled with deep mistrust and social unrest. The wildness of the marshlands is underlined by beautiful low-angle shots of huge flocks of storks and flamingos, a sight that sometimes disorientates the detectives.

The cinematography is perhaps the most remarkable feature of this engrossing film. I later discovered that the director Alberto Rodríguez (who is himself from Seville) and his co-screenwriter Rafael Cobos were inspired to make the film by images of the area and its people shot by two photographers. One was the Seville photographer Atín Aya (who died, only 48 years old, in 2007). Aya’s stark monochrome images captured the atmospheric qualities of the Guadalquivir wetlands and the people who make a living there.

Atín Aya made his photos decades ago, as rice-farming in the area was transformed by mechanization, leaving half-abandoned villages like small islands with people stranded on them. From the start, Rodríguez and Cobos were drawn to the landscape portrayed by Aya which became a key part of the project: ‘It’s a strange place because, despite the fact that it’s completely open, it’s a labyrinth; it’s very difficult to go from one place to another, with short cuts and blocked roads, which can sink at any moment.’

Gallery: the photography of Atin Aya 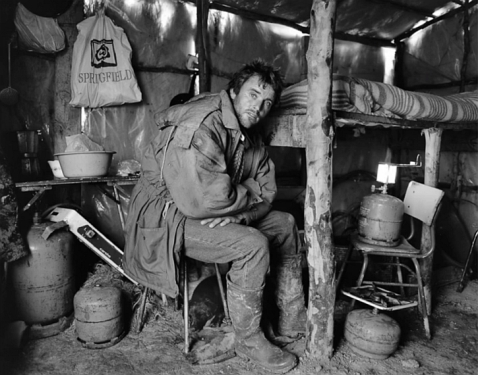 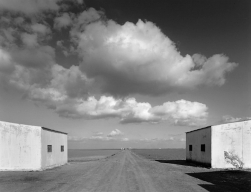 The other photographer who helped define the look of Marshland was Hector Garrido, from the town of Huelva, just along the coast from the Guadalquivir wetlands. It is a montage of his amazing aerial photographs which appear during the opening credits of the film. They are from his collection, Fractals: Intimate Anatomy of the Marsh, which consists of aerial images of landscapes in the Doñana National Park at the delta of the Guadalquivir river. It is one of Europe’s most prominent wetland reserves and conservation areas, covering 500 square miles and crucial for a huge variety of migrating birds, including five threatened bird species.

The language of water is similar in art and nature. In a watercolour, the expression of its beauty depends on the artist’s intention, the texture and composition of the support, the amount of paint on the brush, the intensity of the stroke…Nature, obedient to the established laws, draws in apparent distraction a sketch that is, in and of itself, intrinsically lovely.
– Regla Alonso Miura 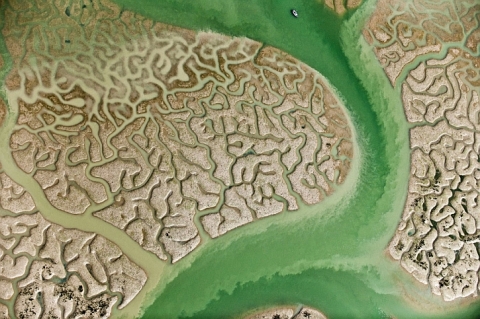 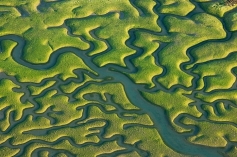 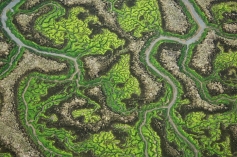 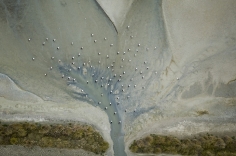 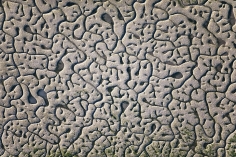 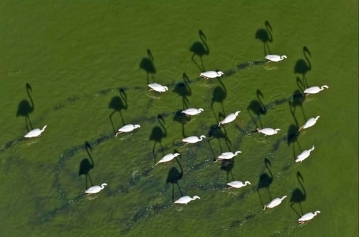 When one flies over Doñana at an altitude of five hundred feet, the same height from which it is seen by the white stork and the flamingo, one is witness to the forms that nature and man have created on the great canvas of the wetlands. At ground level, these forms are hidden on the flat and immense horizon of the lower Guadalquivir, but they nonetheless create the lovely sight one sees from the air. In addition to their undeniable beauty, what captivates me about these images of settings so little frequented, such as the onubense, or Huelva, side of the river, is that they reveal how nature and man use different brushes to paint the infinite canvases to be found in the landscape. The difference is in the geometry. On the one hand, the cold Euclidian geometry drawn in straight lines by man’s rationality, using machines, whether these be simple plows or powerful diggers. On the other hand, the warm but obstinate fractal geometry of the curve and bifurcation sensuously drawn by nature.
– from ‘The Skin of Donana, El Pais, 26 October 2008