Greece: People power or heroes just for one day?

What should we choose as the soundtrack for the stunning outcome of the Greek referendum? Patti Smith’s ‘People Have the Power’, perhaps? Or David Bowie singing, ‘We can be heroes, just for one day’?

The landslide No to austerity vote is thrilling, but the future of Greece still hangs in the balance. What has been clear these past weeks is that there has been a huge cultural and political gulf between the eurozone leaders and those negotiating on behalf of the Syriza government, underlined most dramatically by the surprise resignation of Yanis Varoufakis, the Greek finance minister.

It’s a gulf between those politicians of the European Union who now have no concept of the meaning of that solidarity which was supposed to be central to the European project, bound as they are to the shibboleths of neo-conservatism and international finance – and the majority of the Greek people who represent the growing tide of popular protest resisting austerity and the erosion of democracy across Europe.

Characteristically combative, Varoufakis expressed this concisely in a statement on his blog, in which he said, ‘I shall wear the creditors’ loathing with pride’, continuing:

We of the left know how to act collectively with no care for the privileges of office. I shall support fully Prime Minister Tsipras, the new minister of finance, and our government.

Or, as one woman in Helena Smith’s vox pop this morning from the streets of Athens insists: ‘This is not the Europe we dreamed of. This is not the Europe of enlightened thought, of solidarity, of egalite, fraternite, liberte. This is the Europe that in this country has seen people go mad, has seen thousands commit suicide, has destroyed so many with the loss of jobs.

Beyond the question of what will happen in the next hours or days, there is the deeper, haunting question of where the European Union is headed. I have felt my own loyalty to the vision of that ‘ever-closer union’ weakening over the past months, as Europe’s leaders have faced down the attempts by the Greek government to ameliorate the harsh effects of previous bailout deals with hostility and scorn for democratic expression. And as Europe’s leaders have turned their backs on those desperate peoples risking their lives in the Mediterranean.

In the 1974 referendum on EEC membership, influenced by leftist arguments that portrayed the Common Market as a club for big business, I voted for withdrawal. Then, in the 1990s, along with the greater part of the left and trade union movement in this country, I was inspired by the vision of a European Union that combined social solidarity with the Single Market’s removal of barriers to trade.

But how would I vote now? Yesterday’s Observer included an article by Irish columnist Fintan O’Toole which perfectly summed up my feelings at this time. ‘Europe’, he wrote,

Is a story that most of the central and western nations of the continent agreed to tell themselves and each other in order to deal with the legacies of the second world war and the cold war. And like all stories, it sustained itself, if not exactly with belief, then at least with a willing suspension of disbelief.

The question now, O’Toole wrote, is whether that ‘Europe’ still exists at all. All the evidence suggests, he argued, that it has lost its hold:

One by one, the elements of the Europe story have fallen away. Democracy? European leaders, especially the Germans, have been openly canvassing the idea of “regime change” in Athens. The free movement of people? Hungary is planning to build a fence along its border with Serbia and David Cameron is hoping to build a metaphorical fence around Britain. The welfare state? The recent elections in both Finland and Denmark suggest that even in its Nordic heartland, it is no longer seen as a European value but as a national, even an ethnic, possession, to be kept for “our people” alone.

Solidarity? Who now believes that the average person in Frankfurt or Helsinki sees the pensioner rummaging in a bin in Thessaloniki as a fellow citizen? Thresholds of decency? Formulaic expressions of sympathy aside, there is little sense that the European Union as a whole finds it intolerable that hundreds of thousands of Greeks are living without electricity or that millions have no access to public health care.

Now, O’Toole wrote, ‘the stories Europeans are telling themselves about what’s going on around them are not just different but mutually exclusive and mutually antagonistic’. This collapse of the collective imagination just a product of the eurozone crisis, he argued. It has deeper roots:

The idea of “Europe” that animated the EU depended on the conflicts that gave it birth. The Second World War, fascism and the Holocaust created a deep appreciation of the fragility of peace, democracy and human rights. The Cold War made it imperative for western democracies to compete with communism on its own terms by showing that market economies could deliver, not just prosperity, but social justice, equality and security.

It is not entirely true, of course, that no one at all believes the old story of Europe. The last true believers are on rickety boats in the Mediterranean, trying to make their way to an imagined continent of compassion, solidarity and security. If they ever get to shore, they will find at best a grudging welcome. But those who purport to share their belief in what Europe means badly need some of their desperate optimism. 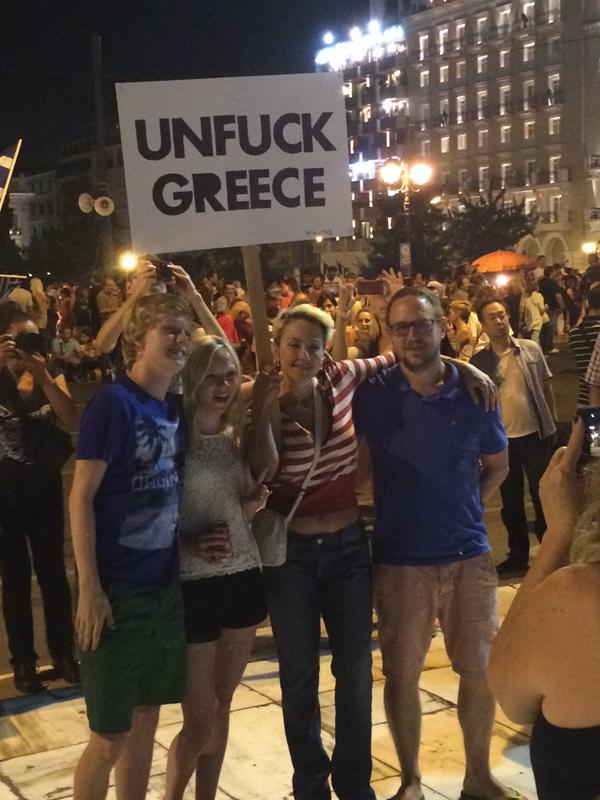 And this is Owen Jones, writing in today’s Guardian:

But this revolt was about something much bigger, and that is why Greece remains in great danger. This is about the very nature of the European Union itself. The European project was founded in the rubble of a war of annihilation, genocide and totalitarianism. It was intended to secure peace, prosperity and democracy for the people of Europe. This dream has become something of a nightmare for a growing number of Europeans. A democratic deficit is unaddressed. The Transatlantic Treaty Investment Partnership is negotiated in secret with large corporations, conspiring to give them the power to sue elected governments in secret courts to try to stop policies they believe hit their profits. The EU treaty negotiated in 2011 effectively forbade any future eurozone government from pursuing an expansionary fiscal policy. Other treaties and directives enshrine free-market dogma in law. Austerity is mindlessly implemented across the eurozone with terrible human consequences: in Spain, too, around half of young people are out of work.

8 thoughts on “Greece: People power or heroes just for one day?”