Jane Bown: looking for the light 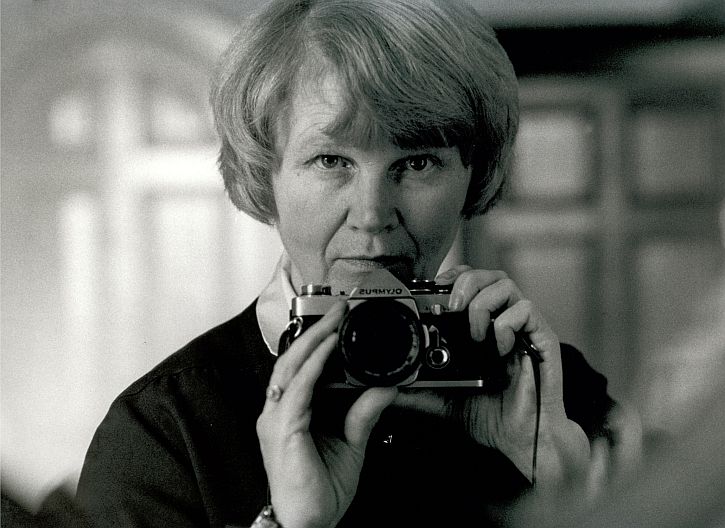 ‘I was terrified, I don’t think I even knew who he was. But the light was good …’

That was the photographer Jane Bown who died yesterday, speaking of her first commission for the Observer in 1949 – a portrait of the philosopher Bertrand Russell.  Her words, writes Luke Dodds today in his tender and funny Guardian obituary of one of Britain’s finest post-war photographers, ‘classic Jane: concise, self-deprecating and modestly assured’.

Bown differed from her male colleagues in the world of photo-journalism in many ways, Dodds tell us. She was intuitive, worked fast, and lacked all interest in camera equipment. In a typical shoot she exposed no more than a roll and a half of film, often in just 15 minutes.

Once, in a dark alleyway down the side of the Royal Court theatre in London, she cornered Samuel Beckett, who was notorious for refusing to be photographed. ‘With simmering hostility’, he stood long enough for Jane to expose five frames – the middle one, says Dodds, ‘is one of her most recognisable portraits and the best portrait of the playwright’.

In 1969, Jane produced another iconic portrait – of Billie Whitelaw, who also died yesterday. Best known for her work with Samuel Beckett, she has been described as his ‘muse’, and will always be associated with the three major works – Not I (1973), Footfalls (1976) and Rockaby (1981) – that Beckett wrote specifically for her, roles that placed enormous technical and psychological demands on the actress. ‘She doesn’t ask any damn-fool questions,’ Beckett once said wryly, explaining his preference for the unpretentious woman, daughter of a Liverpool electrician and his wife, who grew up in Bradford.

Jane Bown’s main preoccupation on any shoot was the light. She worked almost exclusively with natural light and in a completely intuitive way, preferring to ignore the camera’s light meter. Many of her best pictures involved a single exposure and she once remarked: ‘I was always a one-shot photographer … where I’m good is that I am very quick.’

In his obituary, Luke Dodds adds this little vignette of her working method:

She liked to be at the same height or slightly higher than her subjects: given her diminutive stature, this sometimes led to unorthodox requests – Michael Parkinson reclining on the floor of ITN’s reception; Björk perched on rubbish bins outside the MTV studios in Camden Town. Then she would begin to circle the subject, gently clicking all the time. She knew instinctively if she had captured a good frame and would often say: “Ah, there you are.” Jane liked nothing better than to concentrate on the eyes, often using such a limited depth of field that one of the subject’s eyes is slightly out of focus.

I enjoyed Dobbs’ story of when Jane photographed Tony Blair just before he became prime minister in 1997. He writes:

Looking at the contact sheets it is clear that she struggled. When I asked her about it she replied: ‘It was impossible … he was nice and he allowed me to follow him upstairs so that he could try on a different shirt.’ When I pressed further, she scrunched up her face trying to remember the day and eventually said: ‘It was impossible, because there was nothing real there.’ 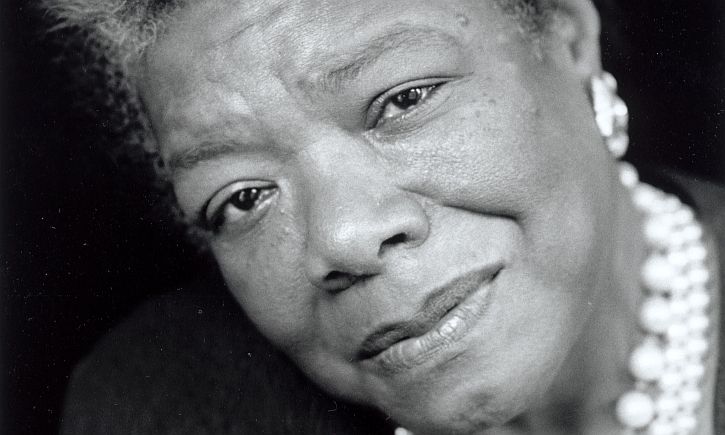 Maya Angelou, who also died this year, by Jane Bown 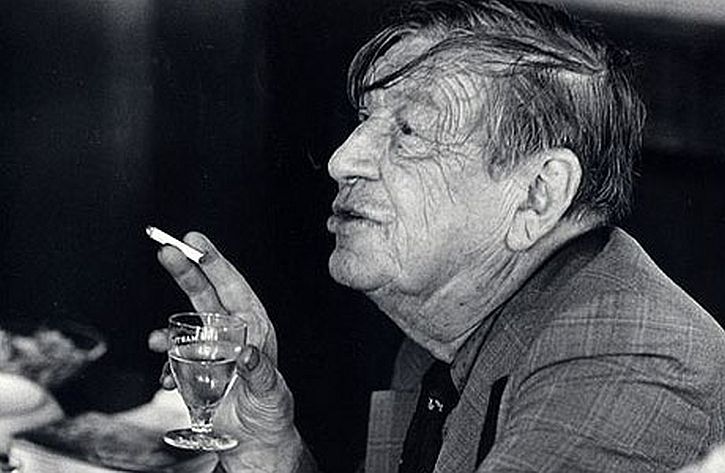 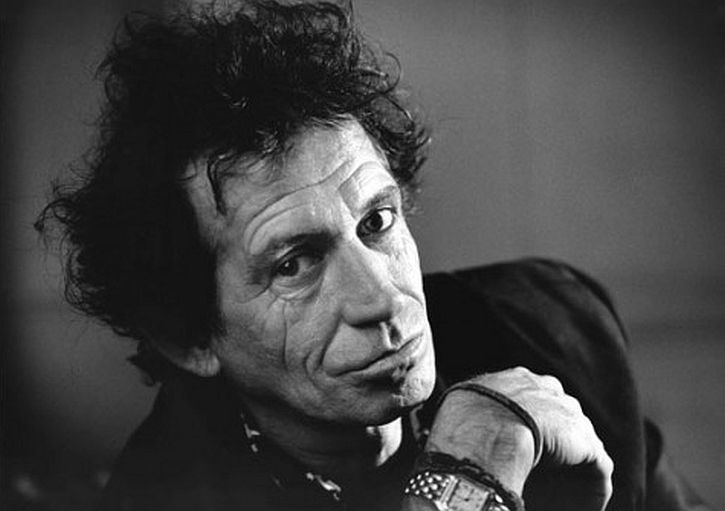 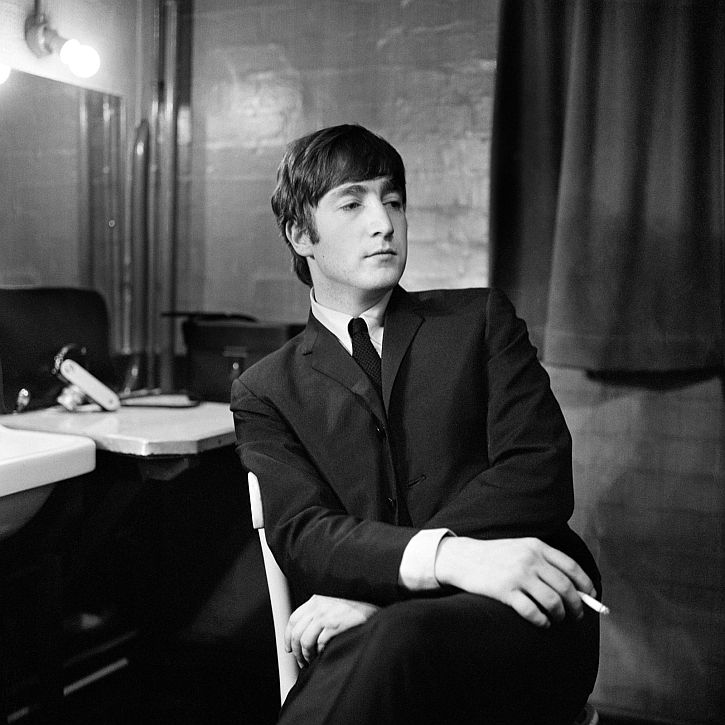 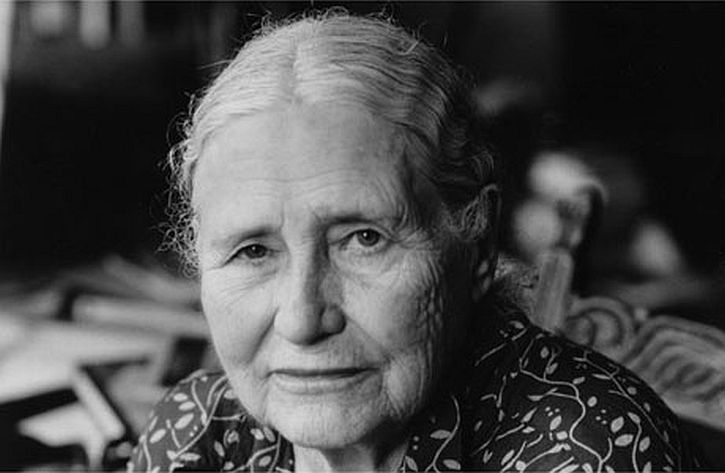 Eamonn McCabe, one time picture editor at the Guardian adds an affectionate footnote to Luke Dodds’ obituary, in which he writes:

Nobody has taken so many wonderful photographs of so many great faces with such little fuss as Jane Bown. She was a reluctant star, hating the attention of being well-known herself. She hated being photographed too. I was lucky she trusted me, but she watched me like a hawk when I photographed her at 80. She photographed the Queen that year and I photographed the queen of photography.

I worked alongside her at the Observer for nearly 15 years and she was as nervous as the rest of us every time she went out to take a picture, but unlike many of us, she prepared meticulously. Light was the most important thing in her life. She never used flash, probably didn’t know how it worked.

If you look at many of Jane’s pictures, the subject is often smiling and relaxed. That was because they were often taken after a long lunch, at which Jane would never drink, and shot by a light-filled window. But the real reason was that they all loved Jane. I often see her kind of picture when I look through a lens now, and think to myself, I can’t take that … it’s a Jane Bown.

Jane Bown in 2006 by Eamonn McCabe

Germaine Greer once wrote of Jane Bown: ‘If we are to assess the best of her photojournalism it is to Cartier-Bresson that we must turn to find her soulmate.’

5 thoughts on “Jane Bown: looking for the light”