The ruins of Kefalonia

Ruins are plentiful on the island of Kefalonia – not surprising, given that humans first settled on the island in Palaeolithic times, and important communities arose in the Mycenaean and Classical eras.

In August 1953 a series of earthquakes struck the Ionian islands, the most disastrous occurring on 12 August. Measuring 7.3 on the Richter scale, it destroyed almost every house on Kefalonia and raised the island by 60 cm (the watermark left on rocks around the coast still bears testimony to this). Widespread damage was also inflicted on the islands of Ithaca and Zakynthos.

While six hundred people died, the economic impact of the earthquake was devastating. 100,000 residents left the island to live elsewhere, leaving only 25,000 residents on the island.  The survivors who stayed began the task of rebuilding, aided by remittances from those who had made a new life elsewhere.

Even for the casual tourist the consequences are apparent everywhere on the island. Firstly, most enterprises are local and family-owned, albeit highly dependent on foreign travel companies and airlines for the island’s primary business of serving the needs of foreign tourists. For example, we stayed at the Nine Muses hotel in Skala, an enterprise developed by a local man who made his fortune in America before returning to invest in his home village. On the day of our departure, now elderly and frail-looking, he made a point of shaking hands with each of us and thanking us for our custom as we boarded our coach for transfer to the airport.

Another consequence of the devastation wrought by the earthquake is that the island’s architecture now consists mainly of low-level and nondescript buildings of pre-stressed earthquake resistant concrete which replaced the centuries-old stone Greek or Venetian red or ochre plastered buildings. No bad thing, in fact: it means that the beach strips of the holiday resorts are not disfigured by high-rise hotel blocks. Instead, a great many hotel developments – such as the Nine Muses – consist of villa style complexes, arranged around cobbled lanes and courtyards.

Since we were based in Skala we had an opportunity on our doorstep to get a sense of the destruction wrought by the 1953 earthquake. Old Skala was a large and thriving village strung out along the hillside about two miles inland from where the rebuilt town now stands. It’s an easy walk from the new town centre out along country roads edged with brilliant yellow mounds of Spanish broom to the remains of the old village.

We walked out of town along the recently-paved main street where new pavement flower beds and trees had just been planted, following the road steadily uphill into the country with the hills ahead of us. Outside the town we passed two large water storage tanks – a common sight on an island where water is in short supply and must be conserved.

Climbing steadily, we passed fields carpeted with wild flowers presided over by a solitary goat, and groves of olive trees beneath which beehives stood in lines – olives and honey being two of the main agricultural products of the island. There were wild-flowers wherever we looked – raggedy rock roses with petals like fabric, giant exposed bulbs of hyacinths that must have bloomed earlier in the year, and small meadows dense with red poppies, white daisies and yellow dandelions.

By the time we reached the ruins of the old village we had climbed some 500 feet and had gained panoramic views across the Ionian Sea to the mountains of mainland Greece.  Below lay the new town, its new location on the shore a concise expression of the dramatic change wrought in the island’s economy not just by the earthquake, but also by the tsunami of mass tourism.

In Old Skala the lives of the inhabitants followed the seasons and the rhythms of planting, tending and harvesting on the land. Rusting away in the undergrowth is an old olive press, once powered by a diesel engine made, according to the label, in Bolton by the firm of R Fielding.

On the opposite side of the track to the olive press are the ruins of the village shops and tavernas. One house belonged to the village doctor, another was the only house in the village to have electricity.  Walking on, the track led downhill to the surviving bell-tower of the church of Archangelos, with the village cemetery beyond its locked gates.  The church has been rebuilt, not very sympathetically, an ugly concrete wall extending right up to the side of the bell-tower, with no attempt to blend the new masonry with the old.

Further down the hillside we found the perfectly-preserved village wash-house built around the spring which still runs. We sat there for a while, eating our picnic of tomatoes and Kefalonian cheese pie (feta encased in a filo-like pastry and arranged in a whirl like a Danish pastry).  It was not difficult to imagine the bustle of village life here in the old days, black-garbed women sharing the village gossip, shouting and laughing as they pounded and scrubbed.

Rested, we retraced our steps, heading back downhill to modern Skala, the tavernas and hotels and the sun loungers arranged mathematically along the shore.

Gallery: the ruins of Old Skala

The road to Old Skala

Spanish broom on the hillside 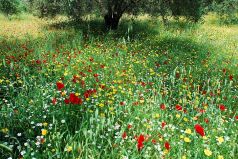 Wildflowers beneath the olives 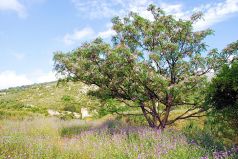 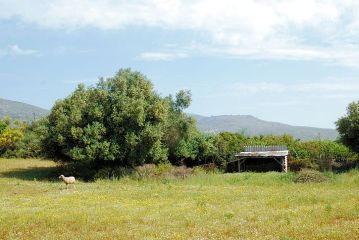 The goat that stared 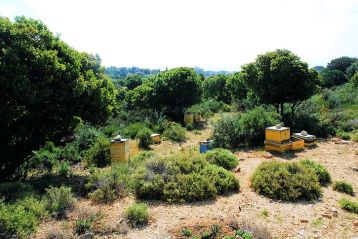 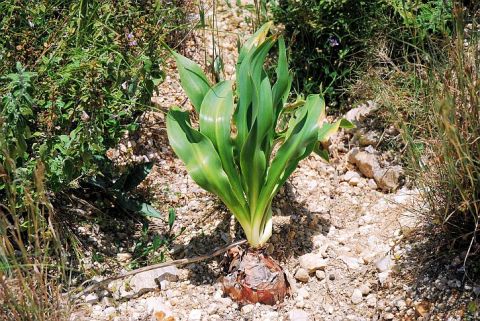 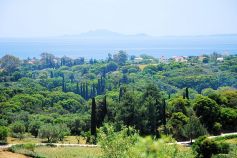 View towards the Greek mainland from Old Skala 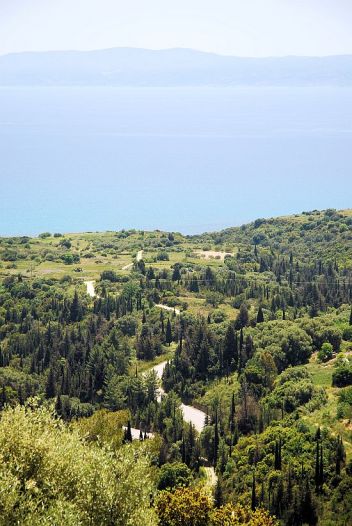 The view from Old Skala 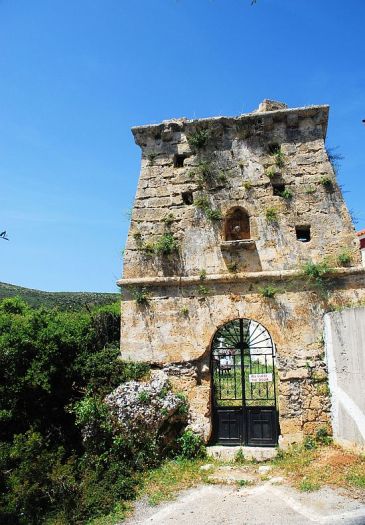 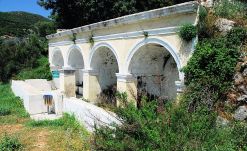 The spring still flows in the wash-house 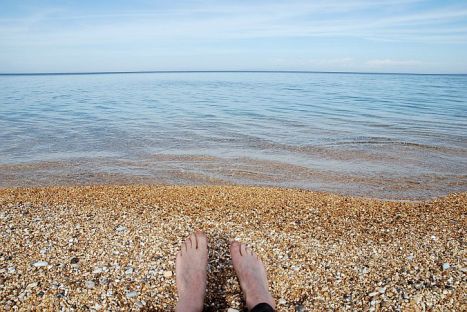 Cooling off after the walk 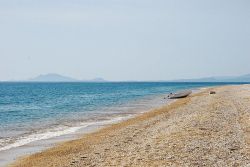 The shore at Skala 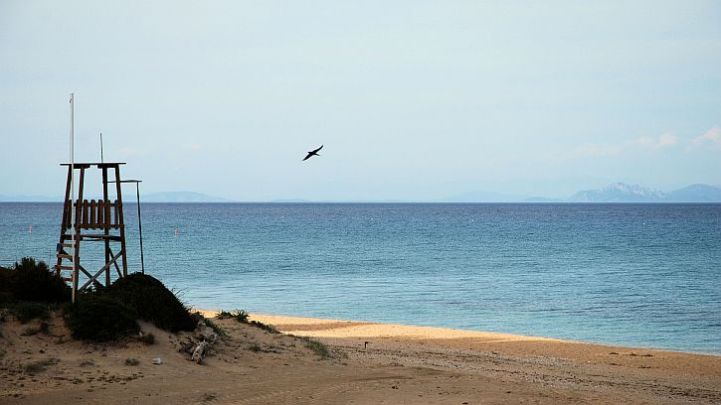 The shore at Skala

Another Kefalonian village with earthquake ruins and a story to tell is Assos, which lies on the far side of the island from Skala. I drove there one day: an adventurous journey, since the main road is closed following a landslip, necessitating a mountainous diversion of endless precipitous hairpins made even more challenging by frequent encounters with large flocks of insouciant goats exercising their ancient rights to occupy the road in the face of all-comers.

The detour did offer the opportunity to see Myrtos beach, also approached by a steep, winding road with hairpin turns. I felt I had to take a look since Myrtos has been described as ‘one of the most dramatic beaches in Greece, a mile-long arc of dazzling white pebbles’. Parking the car at the bottom, I found that  I was virtually alone on a beach of dazzling while pebbles, beneath a lavendar sky, staring at water of exquisite turquoise.

Dragging myself away from this paradisical place, I pressed on to Assos. When the earthquake hit in 1953, most buildings were destroyed and much of the island’s architecture history and variety was lost. Much of the island was rebuilt with pre-fabricated cement buildings, but one place that was rebuilt to its former glory was Assos.

The village had been a popular destination with French tourists, and a plague on the waterfront commemorates the people of Paris who sent large sums of money to help the residents rebuild.

Brooding on a promontory above Assos are the ramparts of a Venetian fortress, built in the 1590s to defend the island from attacks by pirates and the Turks. During the Second World War it was used as a prison by the Germans, and after the war Communists were incarcerated here by the right-wing regimes that ruled Greece in the 1950s.  They organised a prison farm, constructing terraces for vineyards and cereal crops. It was one of the few buildings on the island to survive the 1953 earthquake.

Gallery: the ruins of Assos

Goats: we shall not be moved

The road down to Myrtos beach

Sea and sky: nothing but blue 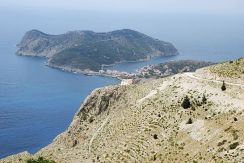 The road down to Assos

The Venetian castle, built in the 1590s

Scattered across Kefalonia are remains from the Mycenaean era of Bronze Age Greece. Driving up to Sami, just outside Poros, we passed the sign for one of the most notable of these remains – a circular tomb of a Mycenean king.  Unfortunately, it was closed on the day we passed.

But at Sami we parked at the harbour, near to the statue to seamen, and began to walk uphill through woodland, on a path that led to the ruins of another ancient civilization. High above the modern port stand the ruins of what must have been a magnificent walled city, known as Kyatis, that flourished during the Classical era (5th to 2nd century BC).

For about an hour we rose steadily along a path shaded by pines and edged in places with borders of wild cyclamen (they were not in flower, but must be an impressive sight when they are). Then we emerged onto the open hillside where field plots edged by the rubble of fallen walls were dense with wild flowers. Seated under an old olive, cooling down after the hot climb, we took in the terraced fields, the view down the valley to the sea, and, to our right, the steep hillside topped by the remains of the the acropolis of Kyatis with its gigantic walls of stone.

Ancient Sami, known as Kyati, was one of four city states that flourished on the island during the Classical and Hellenistc periods from the 5th to 2nd century BC. It was an independent and autonomous city, exercising its own foreign policy and issuing its own coins. The economy was based on shipping and trade, with farming and animal husbandry also being important. Two citadels occupied the tops of the hills above the meadow where we sat, with impressive fortifications surrounding the two hills and stretching down to the coast.

The most impressive remains of the fortifications are those of the wall that comes down the west slope of the hill.  It is built on the bedrock from trapezoidal-shaped stones connected with lead links. The city prospered until the 3rd century AD.

Emerging onto a road and walking for a further half-mile, we came to the ruins  of Agioi Fanentes (Saint Fanentes),  a monastery built in the middle ages utilizing stones from the ruins of the ancient citadel.

Downhill, below the ruined monastery, stands the ruined church of Agios Nikolaos (Saint Nicholas).  On the exposed walls of the apse you can just make out frescoes that date to the 17th century, Nearby is a third, modern church built after the earthquake of 1953, which caused the collapse of the two other churches.

From here the views of Sami and the bay below are superb. All that remained was to return to sea level and a cool drink in a harbour-side taverna.

Gallery: the ruins of ancient Sami 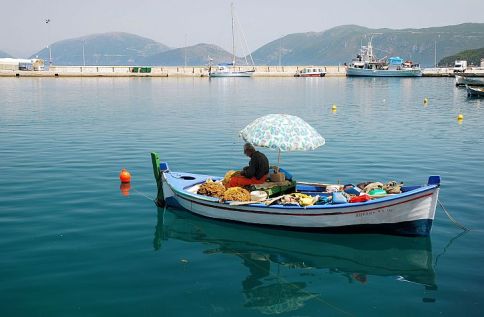 The harbour at Sami

The statue to seamen at Sami 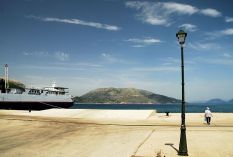 The harbour at Sami

The path up to old Sami 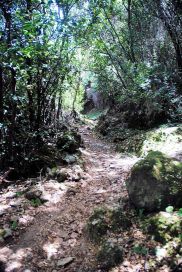 The path up to old Sami

The terraced fields of old Sami 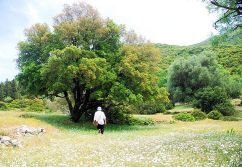 The view from old Sami

The acropolis of old Sami

The mighty wall of Kyatis 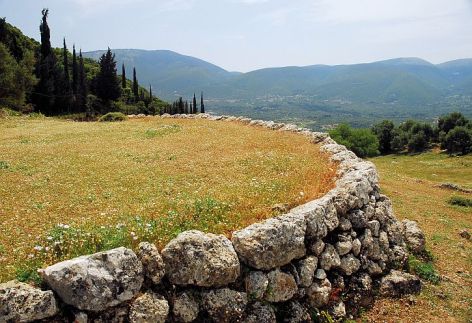 The ruins of Agios Fanentes monastery

Frescoes on the medieval church walls

The view of Sami

On 25 January this year, Greece experienced a political earthquake when, against the background of the Greek financial crisis, the left-wing anti-austerity party Syriza won Greece’s general election, securing 149 out of the 300 seats in Parliament, just two seats short of an absolute majority. In common with all but eight of Greece’s electoral districts, Kefalionia voted by a significant margin for Syriza (39% Syriza, 29% New Democracy).  The aftershocks of that result are still being felt as I write.

13 thoughts on “The ruins of Kefalonia”