The caged bird sings: of things unknown but longed for still 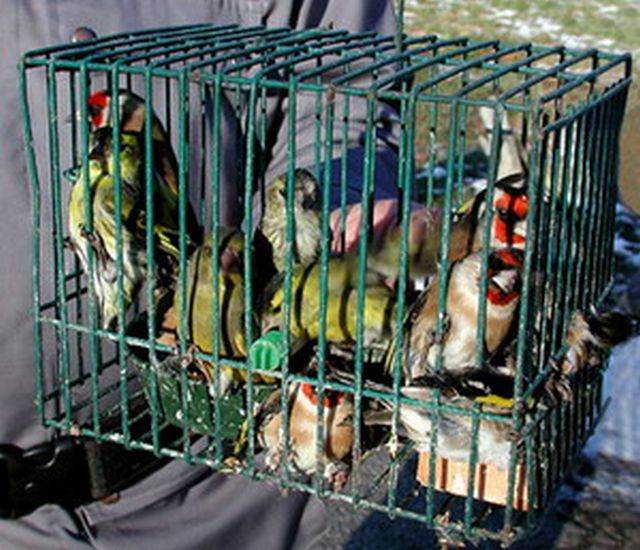 Four days in Naples, and of all the images imprinted on my memory from that city of teeming alleyways and cacophonous streets, one lingers ineradicable.  I was waiting outside a shop in a narrow street echoing with the roar of motorcycles and the shouts of people passing.  Then, above the din, I heard a bird sing. Opposite, a tenement rose up, balconies draped with the morning’s washing, and on a fourth floor balcony, my eyes found the bird that sang.  Some kind of finch, it was trapped in a cage no more than twice its size. Imprisoned, the bird was repeating the same movements over and over, the way I’ve seen a caged zoo animal  pace incessantly one way and back again. The bird fluttered to a top corner of the cage and back down, over and over without pause. The song I had heard was a fearful, endless shriek.

I wanted to climb the stairs and free the bird, but of course I didn’t. But the image of that desperate flapping has not left my mind. I’ve since discovered that what I saw was just one example of a plight that ensnares countless birds in Naples. As this report indicates, birds are caught in large numbers, particularly on the slopes of Mount Vesuvius, to be openly sold on the streets of Naples despite Italian laws that outlaw finch trapping:

Goldfinches, Greenfinches and Siskins are traditionally considered to bring their owners luck in the sprawling conurbation of Naples. Everywhere in the narrow streets and alleyways of the old town, stopped up with vehicle traffic, the song of these birds can be heard from countless balconies where they are confined in small cages. For many long term residents of Naples a finch in a cage is a typical household item.

The birds are still  in clap and mist nets, as well as special cage traps, above all on The birds are sold in normal pet shops, which also sell the necessary trapping accoutrements. The birds and equipment are often not just available ‘under the counter’ but are openly on sale.

The report is illustrated by the photo (above) of goldfinches and siskins seized before they were sold on the back streets of Naples.

Of course, the phrase that has been on my mind these last few days has been ‘I know why the caged bird sings’, the title of the first volume of Maya Angelou’s memorable autobiography. In naming her book, Angelou was honouring Paul Laurence Dunbar (1872-1906), an African-American poet whose works she had admired for years, and specifically referencing the third stanza of his poem ‘Sympathy’:

I know why the caged bird beats his wing
Till its blood is red on the cruel bars;
For he must fly back to his perch and cling
When he fain would be on the bough a-swing;
And a pain still throbs in the old, old scars
And they pulse again with a keener sting —
I know why he beats his wing!

Maya Angelou wrote her own poem that shares the same title as her book:

The free bird leaps
on the back of the wind
and floats downstream
till the current ends
and dips his wings
in the orange sun rays
and dares to claim the sky.

But a bird that stalks
down his narrow cage
can seldom see through
his bars of rage
his wings are clipped and
his feet are tied
so he opens his throat to sing.

The free bird thinks of another breeze
and the trade winds soft through the sighing trees
and the fat worms waiting on a dawn-bright lawn
and he names the sky his own.

The caged bird sings
with a fearful trill
of things unknown
but longed for still
and his tune is heard
on the distant hill
for the caged bird
sings of freedom.

There’s a poem by the American Mark Doty, ‘Migratory’, that speaks of longing, of our homesickness for the wild.  As John Burnside observed in a recent New Statesman article, it is a poem that

both delineates and accepts the limitations of being human, rather than animal …. As the birds fly over and away from him, forcing the speaker to admit ‘I wasn’t with them . . . of course I wasn’t’, we nevertheless see that, for the moment at least, he is touched with wonder and a lingering faith in a natural order that we all too frequently ignore. He has seen – and to see another animal in its true light, however briefly, is to recover a little of the connection that makes us compassionate, which is to say: whole. The leap skyward that Doty imagines reminds us that, unless we are able to experience the world, not just alongside but with other living things, we are incomplete. Compassion isn’t just what makes us human; it is what makes us real. 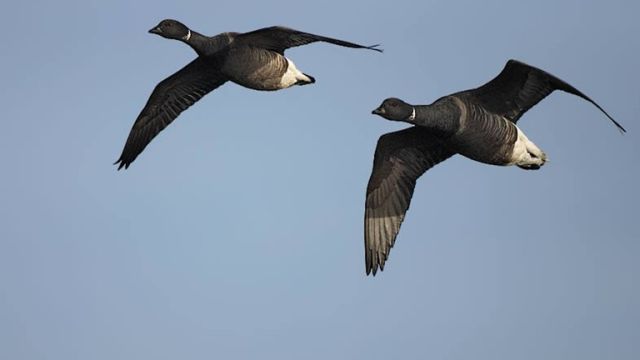 Near evening, in Fairhaven, Massachusetts,
seventeen wild geese arrowed the ashen blue
over the Wal-mart and the Blockbuster Video,

and I was up there, somewhere between the asphalt
and their clear dominion – not in the parking lot,
the tallowy circles just appearing,

the shopping carts shining, from above,
like little scraps of foil. Their eyes
held me there, the unfailing gaze

of those who know how to fly in formation,
wing-tip to wing-tip, safe, fearless.
And the convex glamour of their eyes carried

the parking lot, the wet field
troubled with muffler shops
and stoplights, the arc of highway

and its exits, one shattered farmhouse
with its failing barn…The wind
a few hundred feet above the grass

erases the mechanical noises, everything;
nothing but their breathing
and the perfect rowing of the pinions,

and then, out of that long, percussive pour
toward what they are most certain of,
comes their – question, is it?

Assertion, prayer, aria – as delivered
by something too compelled in its passage
to sing? A hoarse and unwieldy music

which plays nonetheless down the length
of me until I am involved in their flight,
the unyielding necessity of it, as they literally

– so little between spirit and skin,
any gesture so entirely themselves.
But I wasn’t with them,

as they headed toward Acushnet
and New Bedford, of course I wasn’t,
though I was not exactly in the parking lot

either, with the cars nudged in and out
of their slots, each taking the place another
had abandoned, so that no space, no desire

would remain unfilled. I wasn’t there.
I was so filled with longing
– is that what that sound is for? –

I seemed to be nowhere at all.

Recently I’ve been reading Michael Symmons Roberts’ new collection Drysalter; among the fine poems is this hymn to birds, the risks they run and the meaning they hold for us, epitomised in the sound of the dawn chorus:

It begins in song, in fact in songs, such chaos
it’s as if each dead bird is reborn to join
the same dawn chorus: all those shot, mauled,
widow-blind, the roadkill, those whose
gist gave out in mid-migration, those whose
picking at the dry soil drew a blank, now caught
in one tremendous rinse and swoon of multiples
then down the song stoops circling and the tone
slides from tin to wood to stone it tips into
the vortex of its making, a sheer weight
of song too great to hold still and the birds
themselves are sucked in with it, corkscrew
curl of down, crop, tail and crest until it all
collapses into one dun thrush, a dusk yard,
cherry bough, a single note swells in its gullet.

5 thoughts on “The caged bird sings: of things unknown but longed for still”