The intoxicating scent of lime trees 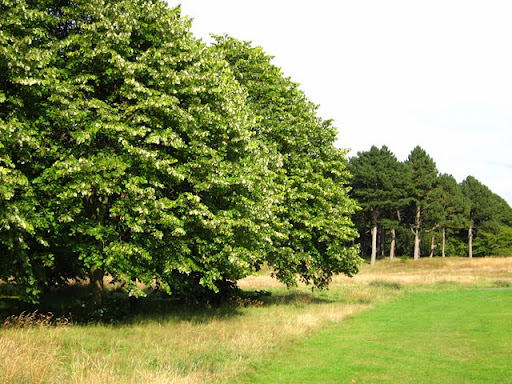 It’s at this time of year that, walking  the streets of this neighbourhood, you will suddenly be assailed by the most  intoxicating scent.  It took me a while to work out the source (made more difficult by the fact that the odour is more pronounced further from the source): it’s the scent of the blossom of the lime trees that are a feature of the avenues here and which are also conspicuous in Sefton Park (above).

The fragrance of the lime is wonderful, but there is a downside to it, as anyone knows who has parked their car under one. We have a lime outside our house and in the summer months find our car covered in the sticky, sugary  secretion of honeydew from the aphids that thrive on limes. 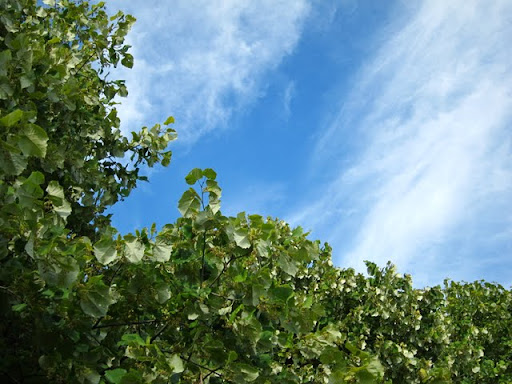 With their large, dark green, heart-shaped leaves limes are a popular shade tree in urban areas. The tree produces its small, sweetly scented white flowers in June and July. After the blossom has faded and fallen, the nut-like fruit, about the size of a pea, hangs on the tree in small clusters (below) that are shed in October. 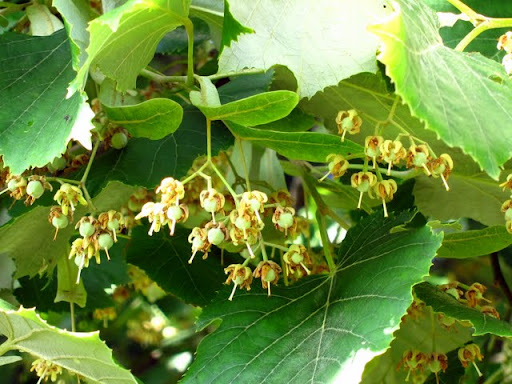 The scent is so strong you can smell it hundreds of yards away. Bees are especially drawn to limes and find the nectar so intoxicating that they can fall to the ground, stunned.  Apparently, honey from lime nectar is has a very distinctive flavour.

A lime (genus Tilia) can grow 130 feet tall and lives on average 500 years. There is a Tilia cordata at Westonbirt Arboretum in Gloucestershire said to be 2,000 years old.  A 900-year-old lime tree that was planted by Empress Cunigundi, wife of Henry II of Germany, stands at the Imperial Castle in Nuremberg.

Lime trees were planted by royal decree along many roads to ensure that the harvest of its flowers was plentiful, since it was valued for its medicinal properties.  Sitting under lime tree was said to cure epilepsy and other nervous illnesses.  The flowers would be dried and used to make tea, considered an efficacious treatment for headaches, insomnia and a nervous disposition.  The sweet sap was made into wine.

In continental Europe, the tree is more commonly known as the linden. Funnily enough, this was the original English name: lime is an altered form of the Middle English lind, meaning lenient or yielding, referring to the fact that the timber is soft and easily worked making it especially good for wood sculptures. Linden was originally the adjective, ‘made from lime-wood’ (equivalent to ‘wooden’):

The 17th century sculptor Grinling Gibbons is regarded as the master of limewood carving.  He is famous for his virtuoso  limewood carvings of flowers, fruits, leaves, small animals, and cherubs, sculpted for Hampton Court Palace and St Paul’s Cathedral, where he made the carvings for the choir stalls (below, click on image to enlarge).

The tree figures in history and folklore across Europe.  In Slavic mythology, the linden was considered a sacred tree. In Estonia and Lithuania, women made sacrifices in front of linden trees, asking for fertility and domestic tranquillity.  For the Germanic peoples, too, the lime tree was hallowed, and judicial cases were often tried under a lime tree as it was said to inspire fairness and justice.   In German folklore, the linden was associated with lovers and romance, and appears as a romantic symbol in medieval poetry from the German lands and eastern Europe.  For example, there is a mediaeval love poem by Walther von der Vogelweide (c. 1170–c. 1230) that begins with a reference to the Tilia tree:

Under the Tilia tree
on the open field,
where we two had our bed,
you still can see
lovely both
broken flowers and grass.
On the edge of the woods in a vale,
tandaradei,
sweetly sang the nightingale.

The tree figures prominently in German culture having been a highly symbolic and hallowed tree in Germanic mythology since pre-Christian times. As in Britain, villagers would assemble to celebrate and dance under a tilia tree, and to hold their judicial thing meetings.  It was believed that the tree would help unearth the truth and help to restore justice and peace.  In 1494, Albrecht Durer painted A Linden Tree on a Bastion (below).

When I was in Berlin many years ago, I didn’t realise, as I strolled down the Unter den Linden avenue that had only recently become accessible to all Berliners again after the fall of the Wall, that I was walking under the same trees that line the avenue where I live.  The Unter den Linden developed from a bridle path laid out by Elector John George of Brandenburg in the 16th century to reach his hunting grounds in the Tiergarten. It was replaced by a boulevard of linden trees planted in 1647, extending from the city palace to the gates of the city, by order of the Great Elector, Frederick William of Brandenburg. Above is a view of Linden Allee from 1691, while the photo below shows the modern  Unter den Linden. Another example of the symbolic power of the linden in German culture is this verse by Wilhelm Müller, der Lindenbaum, one of the two dozen poems of Die Winterreise, the cycle set to music by Franz Schubert:

By the fountain, near the gate,
There stands a linden tree;
I have dreamt in its shadows
so many sweet dreams.
I carved on its bark
so many loving words;
I was always drawn to it,
whether in joy or in sorrow.

Today again I had to pass it
in the dead of night.
And even in the darkness
I had to close my eyes.
Its branches rustled
as if calling to me:
“Come here, to me, friend,
Here you will find your peace!”
The frigid wind blew
straight in my face,
my hat flew from my head,
I did not turn back.

Now I am many hours
away from that spot
and still I hear the rustling:
“There you would have found peace!”

On YouTube I found this remarkable video footage of Mikis Theodorakis singing der Lindenbaum before a vast audience in the Alexanderplatz in East Berlin in 1987, two years before the fall of the East German communist regime.

In Poland, too, the linden is a highly revered tree, at the heart of many Polish legends. In Polish, the month of July, Lipiec, is named for the lipa, or linden tree. According to Polish legend an old Linden tree should never be cut down: to do so is certain to result in misfortune for both the axeman and his family. In Christian legend, the tree is linked with the Virgin Mary, whose image was often discerned in the dark branches of the tree. Today in Poland it’s common to see roadside shrines under a linden tree. Since the tree is believed to be favorite of the Blessed Mother, prayers offered under it are considered to have a good chance of being answered.

O the scent of the limes on the linden tree!
How it brings the love-days back to me,
How it wakens the mem’ries of long ago
Of summer months with their sunlit glow
And the hum of bees in pastures green
And the purling of streams that wound between,
And sequestered haunts we used to know
When we were young in the Long Ago.

Linden blossoms is a verse by the Czech poet Jeffrey Dolezal Hrbek, who left his homeland for America at the beginning of the 20th century.  The nostalgia expressed in the poem reflects the romantic significance of the linden in Czech culture.  Hrbek was appointed the first instructor for the Czech Language programme at the University of Nebraska in 1907. His stay at the university was cut short when he died at the age of 25 from typhoid that same year. Hrbek’s students raised money to posthumously publish a collection of his poems entitled, Linden Blossoms.

Linden or Lime – after all this I’m still left puzzled as to how neither the name nor the tree is related to the citrus fruit called lime.

42 thoughts on “The intoxicating scent of lime trees”