While we were in London recently we went to the Imperial War Museum to see Truth and Memory: British Art of the First World War.  It’s billed as being the largest exhibition of British First World War art for almost 100 years, and there is certainly a great deal to absorb.  I’ll review what for me were the highlights in this and two succeeding posts. As its title suggests, this retrospective encourages us to think about how artists represented the war, and helped commemorate it – but also, how their work still affects our perception of it a century later. END_OF_DOCUMENT_TOKEN_TO_BE_REPLACED

Last night BBC 4 launched a new three-part series on 20th century British artists, British Masters, presented by art historian James Fox. I enjoyed seeing some favourite works by artists such as Paul Nash and Stanley Spencer, but I wasn’t convinced by either Fox’s presenting style or his thesis.

Once again, a BBC documentary series is spoiled by the determination to make a drama out of everything.  Discussing Walter Sickert’s Mornington Crescent Nude (below), Fox drooled, ‘The killer is still in the room: you are the killer…You arrive at this painting innocent. And you leave it… guilty.’ He concluded that Sickert’s painting  was ‘not a painting at all but a crime scene’.   OK – so Sickert did give this and three other paintings the group title The Camden Town Murder, but he was probably only up to the same as Fox – drawing an audience.

Fox also had a go at the controversial Vorticist Percy Wyndham Lewis. Now Wyndham Lewis did hold some pretty nauseous political views, but did he really possess ‘one of the most poisonous minds of the 20th century’ as Fox over-excitedly asserted whilst holding the artist’s pickled brain?  His conclusion was that ‘Bad men can be great artists.’

The trouble with all this is that it draws attention away from the art, so – strangely for a series with an art history thesis – there was far too little focus on the paintings and what makes them great.  Fox’s thesis is that, in the period between the First World War and the 1970s, British artists produced paintings that outshone work that emerged from the art movements of Europe and America. 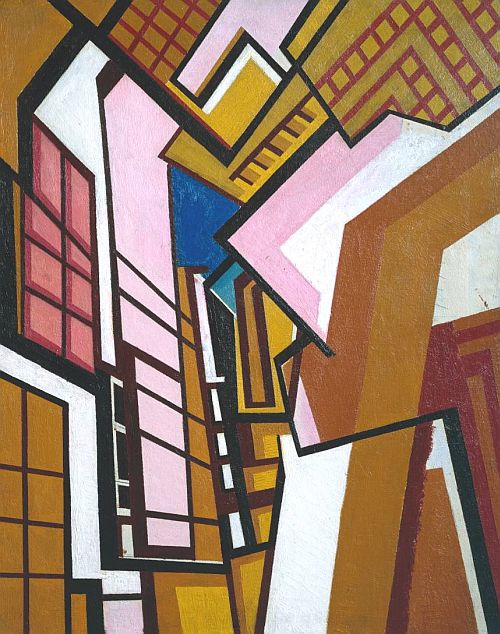 The problem with this is that much of the art that he is examining in the series is now recognised as being amongst the greatest of the 20th century, whilst in his presentation British art seemed to exist in a vacuum, untouched by the European avant-garde. Cubism and its crucial influence didn’t get a mention. Picasso might never have lived.  When discussing Wyndham Lewis and the Vorticists, Fox made no reference to the Italian Futurists, who at the time were barking up the same tree. 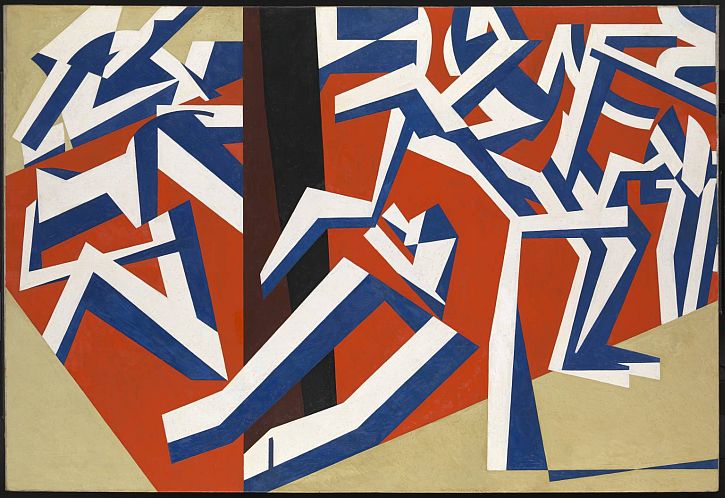 After considering David Bomberg’s The Mud Bath (above) – with again no mention of the influence of Cubism and the Italian Futurists on his work –  Fox moved on to look at three artists – Christopher Nevinson, Paul Nash and Stanley Spencer – who reconciled elements of the pre-War avant-garde with Britain’s realist tradition to create powerful images of the First World War. 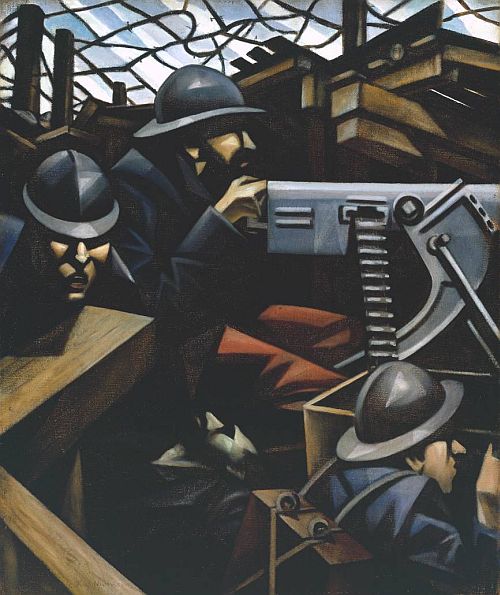 Speaking of Nevinson’s Machine-Gun (above), Fox couldn’t keep the sneer out of his voice as he described Nevinson’s exploits at the front and the ill-health that forced his return to England, where this and other paintings that drew on his wartime experience gained a rapturous public reception.  This is how the Art of the First World War website assesses Nevinson’s significance:

Nevinson (1889-1946) emerged as one of the major painters of the Great War, on a par with Léger in France and Dix in Germany. The son of a journalist and famous war correspondent, Nevinson went to Paris in 1911, where he discovered Cubism, which was to have a lasting influence on him and which taught him all about construction and the geometry of modern forms. His representation of the machine-gun and its operator is exemplary: the hard lines of the machinery dictate those of the robotised soldiers who become as one with the killing machine. The painting caused quite a stir, in France as well as in Britain. Apollinaire praised its painter as being one who “translates the mechanical aspect of modern warfare where man and machine combine to form a single force of nature. His painting Machine-gun conveys this idea exactly. Nevinson belongs to the school of the English avant-garde influenced by both the young Italian and French schools.

Paul Nash was discussed more sympathetically, although Fox made some oddly pedestrian remarks about We Are Making a New World (top).  Introducing what he called the greatest masterpieces of Nash’s career, Fox quoted Nash’s superb statement of his intent as an artist:

I am a messenger who will bring back word from the men who are fighting to those who want the war to go on forever. Feeble, inarticulate will be my message, but it will have a bitter truth and may it burn their lousy souls.

The programme concluded with a look at another work that emerged from experiences  in the Great War:  Stanley Spencer‘s ambitious cycle of 19 wall paintings for the Sandham Memorial Chapel, which took five years to complete.

Sandham Memorial Chapel in Burghclere, Hampshire, was commissioned in memory of Henry Willoughby Sandham, who died in 1919 as a result of an illness he contracted during the Macedonian campaign, and is based on Spencer’s own experiences during the First World War, also in Macedonia. Stanley served as a medical orderly, first at Beaufort Hospital in Bristol, and then, like Sandham, in Macedonia, where he subsequently transferred to the infantry.

The mixture of daily routine and the spiritual in these paintings is typical of Spencer’s greatest work.  The chapel, now in the care of the National Trust. 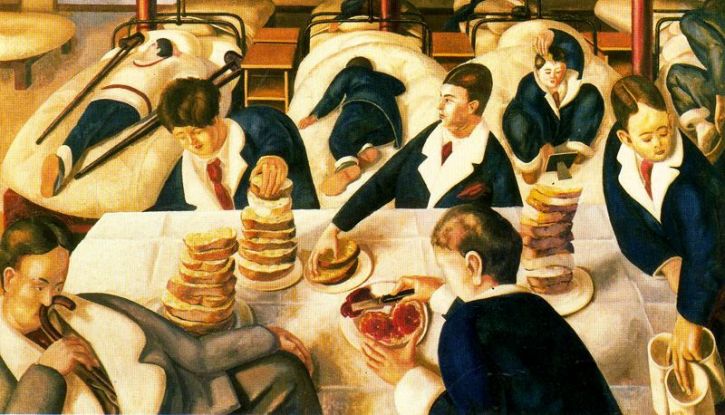 There’s a wonderful gallery of Englishmen Working by Stanley Spencer on the blog, It’s About Time.