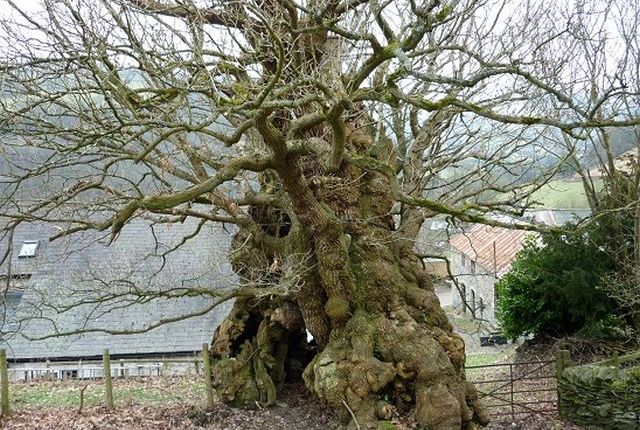 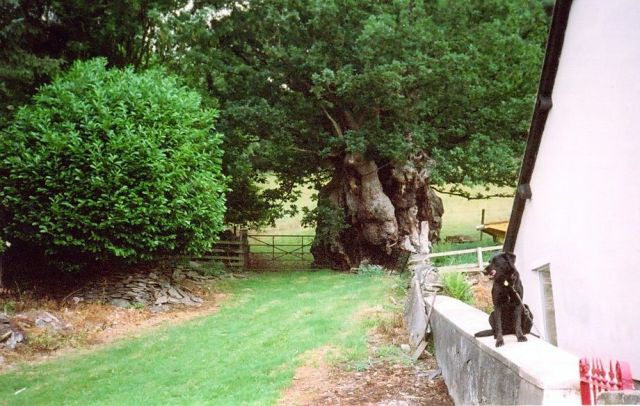 We used to have a caravan just outside Glyn Ceiriog, near Chirk in north Wales.  The road approaches the village winding through the beautiful valley of the Ceiriog river, and a few miles before arriving in Glyn Ceiriog you pass through the hamlet of Pontfadog. There, once, stood an oak tree, the oldest tree in Wales, the third largest in Britain and one of the oldest in Europe.

That is where, in June 2005, I took the photos that open and close this post.  It was the last time that we visited this gnarled and ancient tree, attended by its black guard dog.  Now, after standing for around 1,500 years, the Pontfadog oak has fallen, blown down by gales that swept across North Wales on 17 April (while we were away in Naples). 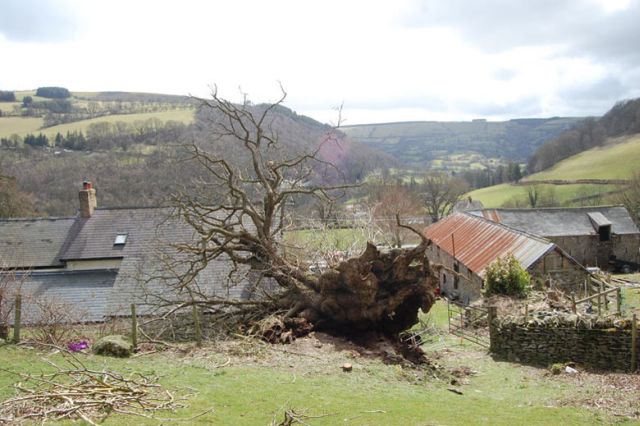 There was some uncertainty about exactly how old the tree was because it had lost its heartwood.  But it was certainly ancient: a National Trust tree expert calculated in 1996 that it had stood at least 1,181 years, and possibly was as old as 1,628 years. ‘I cannot find a record of an oak tree of any of the 500 species internationally which has a greater girth anywhere in the world’, he wrote. What had been called ‘Wales’s national tree’ had a girth measured at over 53ft in 1881.

The tree occupied no special place in the village of Pontfadog – it did not stand on a village green, but instead was approached across a farmyard, presided over when we visited by a large black dog. The oak stood near to the farmhouse, by a gate that led into a hillside meadow.  There were no signs, no celebratory plaques.

The oak, and the farm on whose land it stood, had been in the Williams family for generations. ‘It was always a working tree, pollarded or pruned for its wood. It was part of the community. People built houses from it, cooked from it. That’s why it lived so long. It always had a role,’ Moray Simpson, tree officer for Wrexham county borough council, told the Observer. 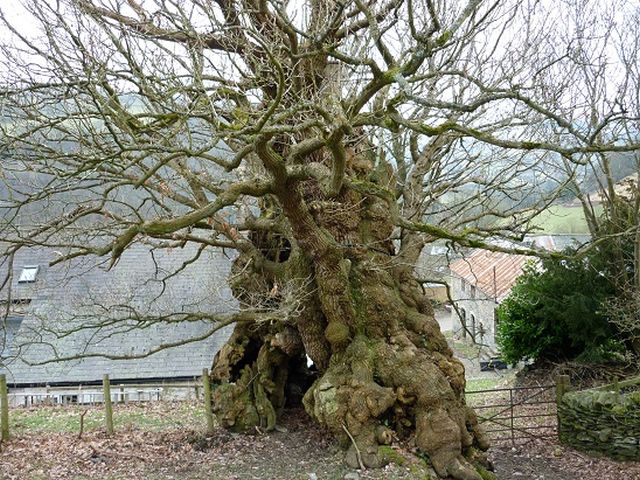 We forget, these days, just how important these oaks were in medieval times, primarily as a source of timber for buildings.  Oliver Rackham, in his History of the Countryside, estimates that 90% of medieval building timbers are oak.  Although oak was the most common timber tree, it was the most expensive; other species – elm or ash, for example – are more often found in medieval terrace houses and the homes of the relatively poor.

But most medieval buildings are made from large numbers of small oaks; every timber, Rackham says, was taken from the smallest tree that would serve the purpose.  It was a skilled job: oaks are crooked, and carpenters had to make ingenious use of the irregular shapes into which they grow.  Remarkably, a typical 15th century farmhouse was constructed from around 330 trees. Small trees, though: usually 9 inches or less in diameter, so perhaps many timbers came from the pollarded trees to which Moray Simpson referred.

In his poem ‘Oak’, Michael Hamburger meditates on the ‘loss of that patient tree, loss of the skills/That matched the patience, shaping hard wood/To outlast the worker and outlast the user’:

Slow in growth, late in putting out leaves,
And the full leaves dark, austere,
Neither the flower nor the fruit sweet
Save to the harsh jay’s tongue, squirrel’s and boar’s,
Oak has an earthward urge, each bough dithers,
Now rising, now jerked aside, twisted back,
Only the bulk of the lower trunk keeps
A straight course, only the massed foliage together
Rounds a shape out of knots and zigzags.
But when other trees, even the late-leaved ash,
Slow-growing walnut, wide-branching beech and linden
Sway in a summer wind, poplar and willow bend,
Oak alone looks compact, in a stillness hides
Black stumps of limbs that blight or blast bared;
And for death reserves its more durable substance.
On wide floorboards four centuries old,
Sloping, yet scarcely worn, I can walk
And in words not oaken, those of my time, diminished,
Mark them that never were a monument
But plain utility, and mark the diminution,
Loss of that patient tree, loss of the skills
That matched the patience, shaping hard wood
To outlast the worker and outlast the user;
How by oak beams, worm-eaten,
This cottage stands, when brick and plaster have crumbled,
In casements of oak the leaded panes rest
Where new frames, new doors, mere deal, again and again have
rotted.

After the Pontfadog oak fell, the local memories surfaced: a missing bull had once spent two days inside the hollow trunk; two golden chisels were said to have been hidden in it; in 1880, six men could be seated around a table inside it; it was used by sheep both as a shelter and somewhere to die; children used to play in it; Victorians posed for photographs by it; and generations carved their initials in it.  And there was Welsh legend: in 1157 before he took on and defeated the English King Henry II, the Welsh prince Owain Gwynedd rallied his army under the tree, and later, when the English king had his men cut down the Ceiriog woods in 1165, the tree was spared.

Here’s a pertinent poem, ‘The Fallen Oak’ by Giovanni Pascoli (translated from the Italian):

Where its shade was, the oak itself now sprawls,
lifeless, no longer vying with the wind.
The people say: I see now—it was tall!
The little nests of springtime now depend
from limbs that used to rise to a safer height.
People say: I see now—it was a friend!
Everyone praises, everyone cuts. Twilight
comes and they haul their heavy loads away.
Then, on the air, a cry—a blackcap in flight,
seeking a nest it will not find today.

Naturally, there was sorrow at the loss of such a venerable living thing – and some recriminations. In December 2012, the Woodland Trust presented a petition with 5,300 signatures to the Welsh Assembly noting the tree’s fragility and calling for better protection.  But the £5,700 cost was considered too high, so nothing was done.  But, maybe we should just accept the hand that fate dealt: in Woodlands, Oliver Rackham points out that great storms and the felling of trees, rather than being a disaster, can be an unmitigated benefit for wildlife.  Monotonous areas of shade are broken up, creating new habitats.  And most uprooted trees survive, sprouting from the base and sometimes along the trunk, calling into question, he writes, ‘the assumption that the ‘normal’ state of a tree is upright’. 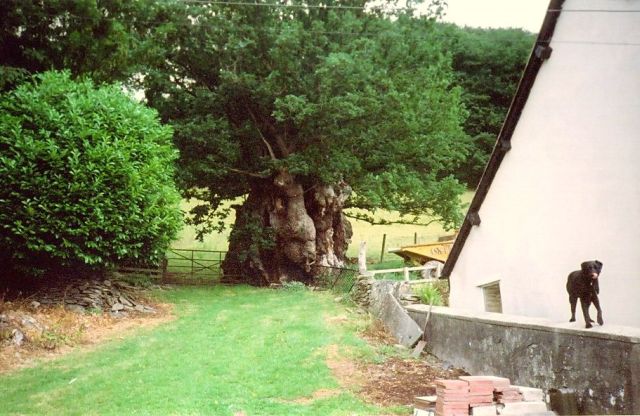