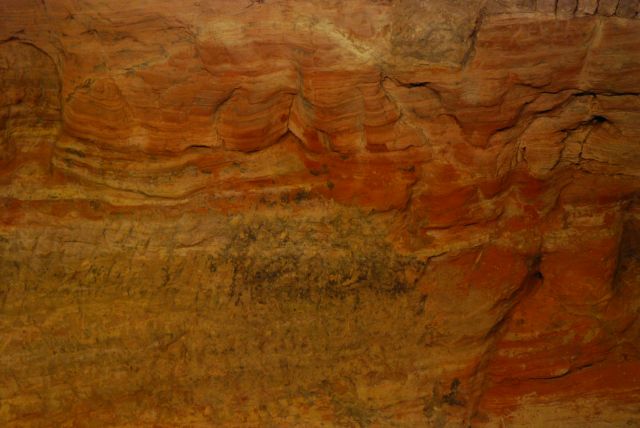 About 40 feet below Liverpool One lies the structure that kick-started Liverpool’s development as a major port: the Old Dock, the world’s first commercial enclosed wet dock.  Today I joined one of the tours that Merseyside Maritime Museum are now making available, and which have proved hugely popular.

The Old Dock has been carefully preserved under the Liverpool One development. For the first time in centuries the bed of the Pool – the creek that gave Liverpool its name – can be seen.

The Old Dock was rediscovered during excavations in 2001 after being buried since 1826. The Liverpool One developers Grosvenor enabled archaeologists to investigate and preserve the dock and have made it publicly accessible as an important reminder of Liverpool’s historic status.

Liverpool and the Pool in 1600 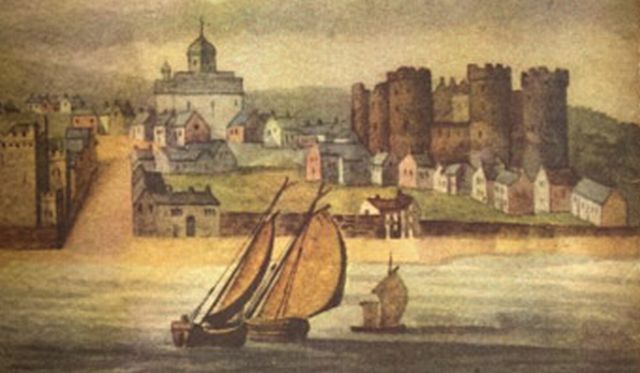 The Old Dock was constructed in 1715 at the mouth of the Pool (seen on map, top), the anchorage which had enabled the town to grow gradually as a port.  But by the end of the 17th century, with increasing numbers of ships using the port, it was struggling to cope.  The Dock was constructed very near to the site of the ruins of Liverpool Castle (seen on both 17th century maps above).

The tour guides led us down flights of steps beneath the Liverpool One car park until we emerged on a small viewing platform situated roughly at the height of the dockside as it would have been in 1715, about 40 feet below the present ground level.  Here, if we turned to the west we could see a computer reconstruction of  the view from the Old Dock looking out towards the river in 1810 (above).

What you can see is the sandstone bedrock of the Pool, the creek that ran from the river north towards the present city centre, and the layers of brick that formed the dock wall laid on top of the bedrock.

In 1708 the merchants who controlled Liverpool Corporation employed Thomas Steers, one of Britain’s leading canal engineers, to find a solution.  He converted the mouth of the Pool into a dock with quaysides and a river gate. It was now possible for ships to load and unload whatever the state of the tide – a revolutionary facility.  Our guides explained that before the Dock was constructed it could take weeks to unload a ship anchored out in the river, with smaller boats shuttling back and forth, depending on the state of the tides. After the Dock opened it took only two days. Opening on 31 August 1715, the Old Dock could accommodate up to 100 ships. Originally it formed a tidal basin accessed directly from the river, but from 1737 access was via Canning Dock. 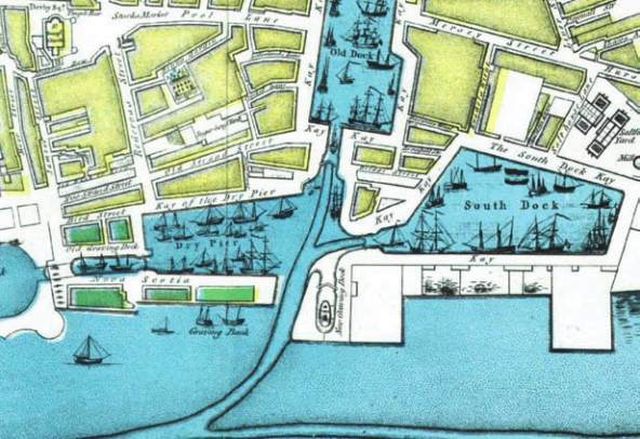 The impact of the Dock was immense and London, Bristol and Chester lost significant amounts of trade throughout the 18th century as a result.  Among the first to praise the dock was Daniel Defoe, who wrote in 1715: ‘This is of so great a benefit and its like is not to be seen anywhere in England’.

Although Liverpool vessels were involved in the slave trade before the dock opened, it would have served ships involved in the Africa-America trade, propelling Liverpool to world leader of this trade. The dock led to Liverpool’s establishment as the leading European port and subsequent world trading port.

By the early 1800s, the dock was considered too small for the growing size of shipping using the port; the quays were too narrow; the city’s sewage polluted the dock’s water; and the narrow wooden drawbridge across its entrance channel caused traffic jams. The Old Dock closed on 31 August 1826 and was filled in. Liverpool’s fourth Custom House (below), designed by John Foster, was built on the site between 1828 and 1837, and was demolished after severe bomb damage during the Liverpool blitz on World War II.  It is considered one of Liverpool’s great lost buildings.

The castle was the largest and most important building in Liverpool for nearly 300 years. It was built on a sandstone outcrop overlooking the Pool and was ideally situated to defend the town’s harbour.  Built in 1235 as a base for soldiers embarking for Ireland, it was located where present Derby Square is.  However,  within 100 years the castle was obsolete and fell into disuse. By the time Royal Inspectors saw the castle in 1559 it was in ‘utter ruin and decay… a great defacement unto the town’. Local people used timber, lead and stone from the castle for their own buildings until it was finally demolished in 1720.

The Old Dock tour guides explained that Grosvenor, when developing the site, had designed the frontage and steps up to Chevasse Park to evoke the sense of the sandstone walls of the Castle. 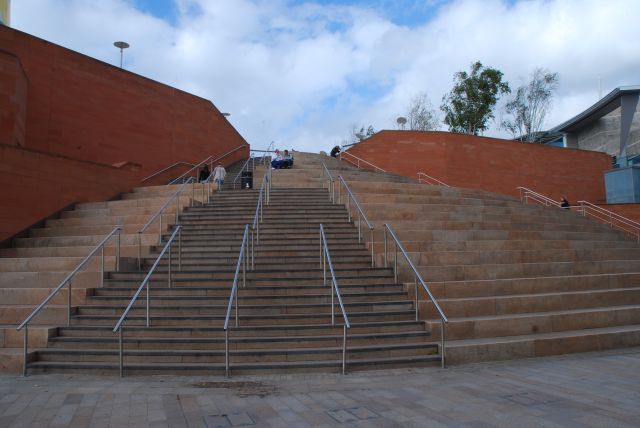 Above: built on the site of Liverpool Castle, this part of Liverpool One was designed to evoke the sense of the Castle walls.

While below ground, the guides pointed out this archway, the entrance to a an underground tunnel which must have led up to the Castle.  It was bricked up long ago – from the inside, and there are plans to explore it at some point when resources allow.  The brickwork was damaged by Tony Robinson swinging a spade when the Channel 4 Time Team came to film the archaeological dig.

In the YouTube clip below, one of our tour guides speaks to the Echo when the Dock opened to the public for the first time:

Back outside, our tour guides explained the story behind the fountain on the pavement that leads from Liverpool One to the Albert Dock, and situated just above the Old Dock. It’s a memorial to William Hutchinson, a notorious Liverpool privateer who later became master of the Old Dock.  The Old Dock was only accessible at certain states of the tide, and was at the mercy of Liverpool’s powerful tides and currents, boisterous winds and treacherous approaches through the bar.  Tidal predictions were totally inadequate, so Hutchinson put his mind to improving navigation at Liverpool. He started to keep a meticulous tidal record, and this data was used to make tidal predictions which have proved remarkably accurate right down to the present.

Every day Hutchinson measured the time and height of each high tide. He recorded the weather, wind direction and speed, temperature and air pressure.  These measurements were the first systematic tidal measurements made in the UK.  His notebook is a remarkable document that is now used as a control to measure the degree to which sea level has risen since his time.

Soon it was required of Masters and Pilots that they carry Hutchinson’s tidal predictions and in 1777 he published the first of four editions of a book, Treatise on Practical Seamanship. In addition, he improved lighthouses, started a lifeboat service, and a pilot service, and founded a society for mariners’ widows.

Hutchinson was born in September 1716 in Newcastle-upon-Tyne and went to sea as a boy, probably when his father died in January 1727.  Around 1740, when England was at war with France and Spain, he moved to Liverpool and  joined forces with Fortunatus Wright, a famous Liverpool privateer. Between them they captured many foreign merchant ships, which they sold, or ransomed the cargos in friendly ports. By 1752 Hutchinson could afford to order his own boat with a 90 foot keel to be built for the Jamaica Trade. He was still active as a Privateer as late as July 1758 during the Seven Years’ War with France.

Hutchinson’s legacy was to have provided data sets which have proved to be important sources of tidal and meteorological information ever since.

In 2008, at the completion of the Liverpool One development,  a fountain was constructed marking the boundary of the Old Dock. On the pavement beside the fountain examples of William Hutchinson’s tidal measurements have been inscribed. The numbers marked into the paving refer to measurements made by Hutchinson of the heights and times of high water at the Dock for January 1783. 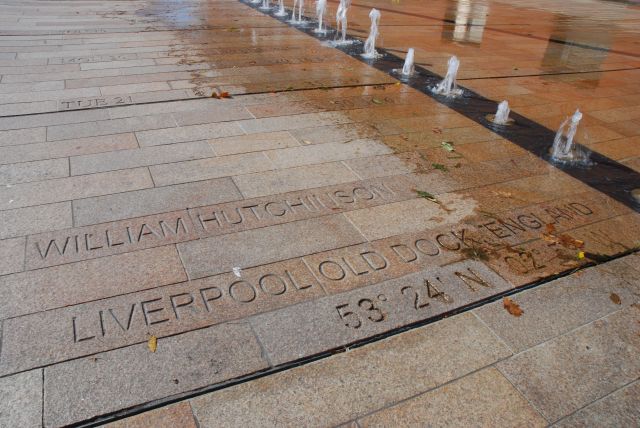 In a further attempt to convey some of the history of the Dock, Grosvenor have outlined its boundaries in the walls and brickwork of the pavement of the new open space and the contours of the lake beside the fountain.

Outside the entrance to John Lewis there is a viewing port where passers-by can look down into the Old Dock. 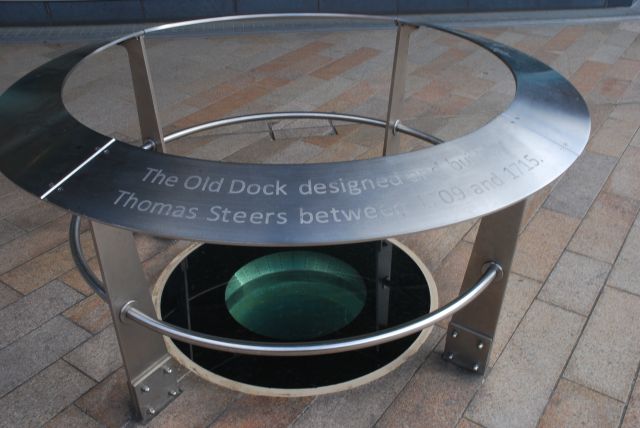