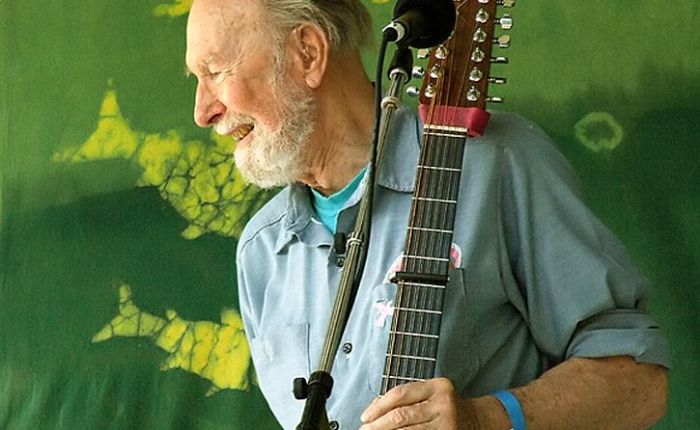 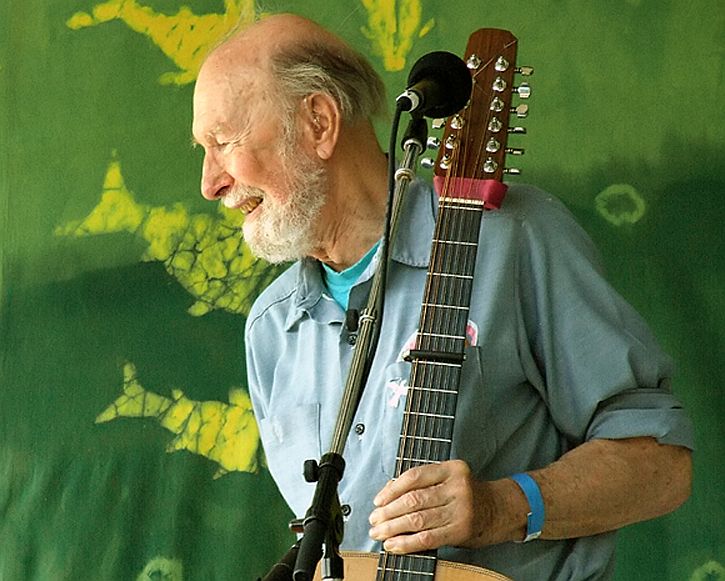 Following the death of Pete Seeger I came across reviews of an album put out in 1998 by Appleseed Recordings, an idealistic independent music label set up by Jim Musselman, a lawyer and activist who once worked with  Ralph Nader.  Musselman has devoted the label to releasing socially conscious contemporary and traditional folk and roots music by established and lesser-known musicians.  On the Appleseed website, Musselman speaks of the years when he worked with Ralph Nader:

I travelled the country for eight years, criss-crossing America in a Guthrie-esque way, seeing the nation and its citizens up close, learning the best ways to listen and to communicate. When I was organizing local communities to fight back against multinational corporations, I would start our open public meetings with a song, figuring that unifying people in singing was an important first step to unifying them in political action.

In 1997, for Appleseed’s first major project, Musselman approached numerous well-known musicians, along with writer Studs Terkel with a request to each record a song written, adapted or performed by Pete Seeger for a tribute album to highlight Seeger’s musical contributions and his tradition of mixing songs and political activism. The resulting  double CD Where Have All the Flowers Gone: The Songs of Pete Seeger was the one I stumbled across as I followed internet references to Seeger in the days after his death. 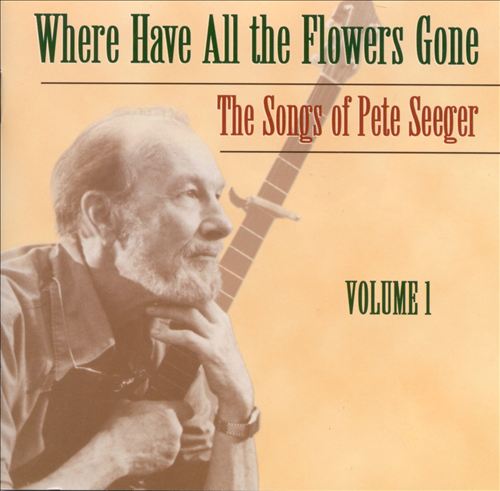 It’s a terrific album from which you gain a holistic sense of the man and the causes he embraced. Jim Musselman also did a great job choosing songs from Seeger’s vast repertoire and matching each tune with an artist ‘based on either the philosophical fit between the artist and the message of the song and/or their unique musical style’, as he writes in the accompanying booklet. As an example of this approach, take the opening track – ‘Where Have All the Flowers Gone’ – sung by Irish songwriter and peace activist Tommy Sands with Bosnian Vedran Smailovic (‘the Cellist of Sarejevo).  Bear in mind that this was recorded in 1997, before the Good Friday agreement in Northern Ireland and only months after the lifting of the siege of Sarejevo.

The album includes 37 versions of Seeger-related songs specially recorded by luminaries such as Bruce Springsteen, Jackson Browne, Billy Bragg, Sweet Honey In The Rock, Ani DiFranco and many others.  The material is wonderful, every song reinforcing the picture of Seeger as both an interpreter of musical tradition and as a crusader for social justice.  The performances are first-rate, with many highlights. Bruce Springsteen’s gentle reading of ‘We Shall Overcome’, for example, precedes the version he recorded for his album, The Seeger Sessions many years later, while Jackson Browne and Bonnie Raitt offer a lilting reggae-inflected account of ‘Kisses Sweeter Than Wine’.  There are the songs that reflect Seeger’s later commitment to environmental issues and his campaign (entirely successful) to clean up his beloved, polluted Hudson river, such as ‘Sailing Down My Golden River’. 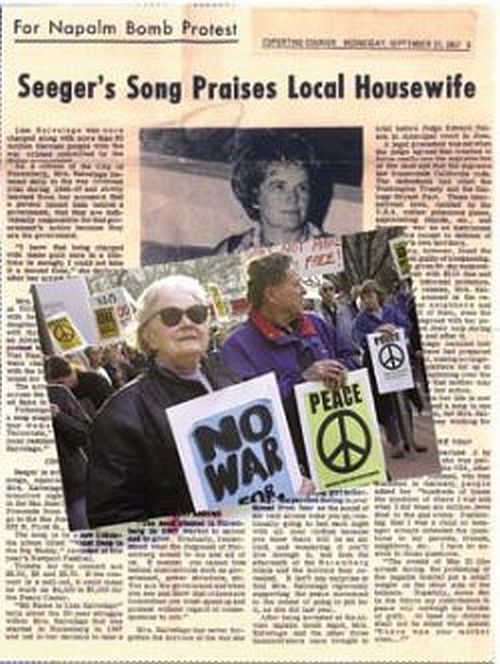 A remarkable, if less musical interlude comes with Ani DiFranco singing ‘My Name Is Lisa Kalvelage’, Pete’s adaptation of the words spoken in May 1966 by Lisa Kalvelage, one of four women who stopped a shipment of napalm to Vietnam by standing on a loading platform and refusing to move. Seeger’s words come from the statement she made in court after being arrested. Kalvelage likened her protest to lessons she learned from being raised in Nazi Germany – never to keep silent:

If you live in a democratic country where the government is you, you cannot say, ‘I followed orders,’ ” she told a reporter. “If you recognize that something is wrong, you have to speak out to set it straight.

But the words I really wanted to pass on in this post come from one of the two recitations on the album by the late Studs Terkel. It’s a reading of ‘Blessed Be The Nation’, verses Seeger left on a rock on an island where he had camped with his youngest daughter.  He elaborates in the CD booklet:

In 1964 I took my youngest daughter canoeing on a beautiful lake in Maine.  We camped on a little island and were dismayed to see the beach littered with bottles and cans.  We picked ’em all up.  I had a marker with me and wrote this graffiti on a flat stone.  I never wrote a tune, but someone else can try.

Cursed be the nation of any size or shape,
Whose citizens behave like naked apes,
And drop their litter where they please,
Just like we did when we swung from trees.

But blessed be the nation and blessed be the prize,
When citizens of any shape or size
Can speak their mind for any reason
Without being jailed or accused of treason.

Cursed be the nation without equal education,
Where good schools are something that we ration,
Where the wealthiest get the best that is able,
And the poor are left with crumbs from the table.

Blessed be the nation that keeps its waters clean,
Where an end to pollution is not just a dream,
Where factories don’t blow poisonous smoke,
And we can breath the air without having to choke.

Cursed be the nation where all play to win,
And too much is made of the colour of the skin,
Where we do not see each other as sister and brother,
But as being threats to each other.

Blessed be the nation with health care for all,
Where there’s a helping hand for those who fall,
Where compassion is in fashion every year,
And people, not profits, is what we hold dear.

There’s a recording of Studs Terkel reading the words on YouTube:

In another song on the album – ‘False from True’, sung by Guy Davis – Seeger ruefully observes the limits of protest in song.  But, as he remarks in the verse, he continued to sing our story for as long as he had breath within.  For that we can be thankful, for the words continue, inspiring succeeding generations: