This week the 141st annual Trades Union Congress was held in Liverpool for the first time in 103 years. In 1906 the TUC met at St George’s Hall; this year’s conference takes place at the new BT Convention Centre on the Albert Dock.

One of the key issues facing this year’s Congress is the link between the Labour Party and the unions. Some, like the RMT and NUM, have already severed their connections. The Communication Workers Union,  currently greatly concerned by the threat of Post Office privatisation, will almost certainly disaffiliate if privatisation goes through. In fact, the union has proposed a motion for the Liverpool Congress which should cause great concern to the Government. It observes that New Labour is failing to attract trade unionists and is pursuing policies of cuts, privatisation and has refused to repeal anti-trade union laws. The CWU wants an urgent conference of Labour affiliated unions to “consider how to achieve effective political representation…”. Meanwhile, Unison has suspended constituency funding to 35 Labour seats including  Liverpool Wavertree, held by Jane Kennedy.

This all has curious echoes of the 1906 Congress; back then Liverpool was not a bastion of Labour support: there were divisions among trade unions and debates over affiliation to the new Labour Party, the result of casual work and sectarian politics. Yet nationally 1906 was the year of the great Liberal Party landslide election victory and the passage of the Trades Disputes Act which for the first time granted the right to strike.

1906 was also the year that the Labour Representation Committee, established at a special meeting of the Trade Union Congress in 1900, adopted the name Labour Party. In the 1906 election, the party won 29 seats. Within 17 years the Liberal party was in ruins and Labour was in government. 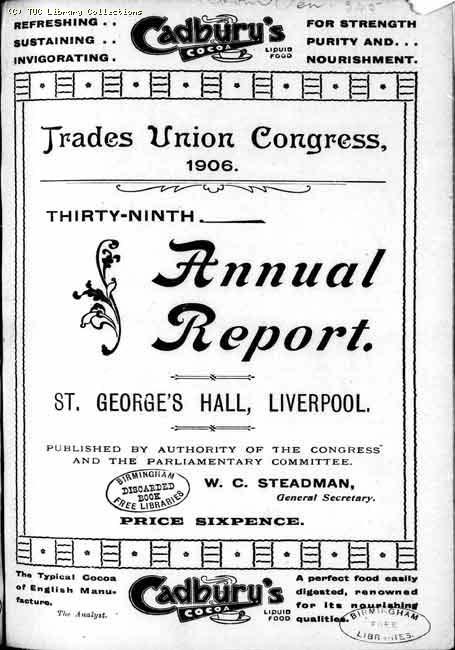 The introduction to the report of the 1906 TUC asserts proudly:

Never in the annals of the Trades Union Congress has there been so large and representative gathering as the one held this year at Liverpool, 191 delegates being present, representing a membership of 1,555,000. Among the delegates there were no less than 30 Members of Parliament, one Mayor, and a large number of Magistrates and Councillors from all parts of the country, showing thereby that the Congress is maintaining its importance. Although differences may exist as to the solution of certain social problems unity prevailed throughout the week, and sincerity marked the tone of the speeches. On the whole, business was conducted in a most satisfactory manner…The Congress at Liverpool of 1906 will always stand out conspicuous in the history of the Labour movement as the most successful and business-like ever held.

I’m sure the 2009 report will adopt a similar tone!

When the TUC met in Liverpool in 1906 they were coming to the second city of Britain and the Empire. The phenomenal nineteenth-century growth of the city had been based primarily on trade: British industrialisation brought massive increases in the imports of cotton and other raw materials and the exports of manufactured goods, and Liverpool became the largest port serving the industrial north.

The rise of the city drew in many thousands of migrants from the rest of England, Ireland,Wales and elsewhere who formed a huge and varied labouring force. Liverpool became a great proletarian centre, therefore, and it was out of its working class that the Liverpool Trades Council and Labour Party evolved.

The ‘new unionist’ strike wave of 1880s broadened trade union support, especially in Liverpool. A series of major strikes in Liverpool amongst unskilled workers in 1889 and 1890 led to the unionisation of dockers, seafarers, gasworkers, post office workers, tramway employees, and others. Women workers in the workshop trades of cigar-making, book-folding, coatmaking, upholstering, sack and bag making and laundering were also organised . By early 1891 the Trades Council had 47 affiliated unions, representing 46,000 workers, and in October 1890 it voted to admit women delegates for the first time.

However, the relationship between the Trades Council and certain unions, particularly the Dock Labourers Union, which represented the largest single group of male workers in the city, was fractious.  There was a series of disputes between the leader of the dock workers, James Sexton, and the Trades Council. A social and cultural gulf divided the regularly-employed, relatively well paid time-served workers that dominated the Trades Council, and the low-paid casually-employed workers. From the other side, the attitude towards maritime workers was expressed succinctly in the pages of a local socialist newspaper as follows: ‘The ways of those amphibious trade unionists who work ‘along the line of the docks’ are not easily understood by those who find employment on terra firma’.

There was a thriving socialist movement in Liverpool around the turn of the century, with the Social Democratic Federation (SDF), the Fabian Society and the Independent Labour Party engaging in campaigns over unemployment. But it was only in 1900 with the development nationally of the Labour Party that the local craft unions  were finally won over to the idea of independent labour representation. The Trades Council joined with the ILP, Fabians, SDF, and the Edge Hill and Garston Labour Clubs to form what became by 1903 the Liverpool Labour Representation Committee. Later, in 191 7, this body formally adopted the name of the Liverpool Labour Party.

One historian of the early years of the Labour Party points out that Merseyside was an extremely weak area for the party, due  to the combination of religious sectarianism with the predominance of casual, unskilled labour in the area. In the dockside wards of Liverpool, the Catholic areas, and the areas of predominantly unskiued, casual labour, the Labour Party won little support. Nevertheless,  a number of significant figures in the local labour movement had connections with the Labour Party, including union leaders like James Sexton and Jim Larkin of the dockers, and Bob Tissyman of the Policemen’s Union.

Labour made only limited gains in local elections before the First World War. It won its first two seats in 1905 when the dockers’ leader James Sexton won St Anne’s ward and John Wolfe Tone Morrisey (great name!) took Kensington. Even then, Morriseylost his seat three years later leaving Sexton in splendid isolation in the council. 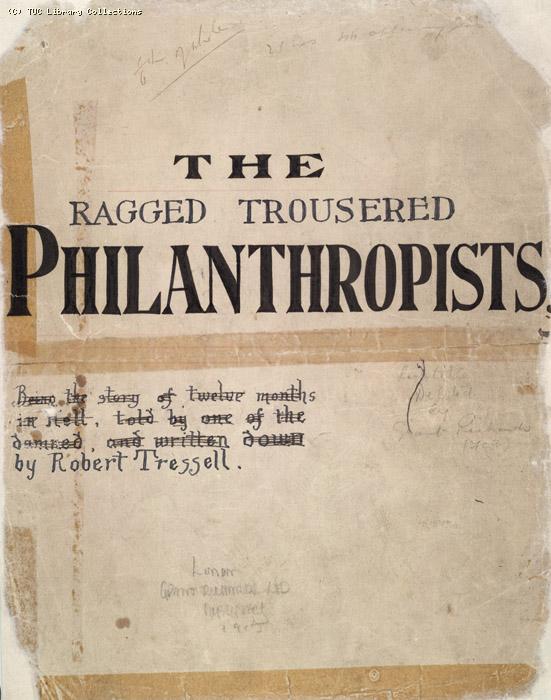 While the TUC was meeting in Liverpool in 1906, a painter, Robert Noonan was working in the building trade in Hastings, experience he was to transform into  The Ragged Trousered Philanthropists,  published under his nom de plume, Robert Tressell in 1914.

He had died, aged 40, in Liverpool Royal Infirmary three years earlier from tuberculosis. There is now a plaque (above) on the old Royal Infirmary building in Pembroke Place which records this. How did he come to be in Liverpool?  Unhappy with his life in Britain, he had decided that he and his wife, Kathleen should emigrate to Canada. He had been influenced by William Morris, and had joined the Social Democratic Federation in 1906. The following year, after a dispute with his employer, he lost his job. His health began to deteriorate and he eventually developed tuberculosis. Unemployed and unable to remain politically active, he started writing, something he hoped would earn enough money to keep him from the workhouse. In Liverpool he was buried in a mass grave with twelve other paupers opposite Walton Hospital. The location of the grave was not discovered until 1970. Subsequently, a memorial was placed on the grave (below).

“As Owen thought of his child’s future, there sprang up within him a feeling of hatred and fury against his fellow workmen. They were the enemy – those ragged-trousered philanthropists, who not only quietly submitted like so many cattle to their miserable slavery for the benefit of others, but defended it and opposed and ridiculed any suggestion of reform. They were the real oppressors – the men who spoke of themselves as ‘the likes of us’ who, having lived in poverty all their lives, considered that what had been good enough for them was good enough for their children” – Robert Tressell, The Ragged Trousered Philanthropists

One of  the designs painted by Robert Noonan in St Andrews Church, Hastings and saved before the demolition of the church.