As the daylight hours shorten and the leaves start to fall I think back to the beginning of this summer when our dog very nearly died. It’s a memory brought into sharp focus by a recently-watched film and the book I am reading at the moment. Laurie Anderson’s essay-film Heart of a Dog has a lot in common with Rebecca Solnit’s most recent book, The Faraway Nearby: both are digressive, looping, meandering disquisitions on storytelling and memory, and the connection between love and death. END_OF_DOCUMENT_TOKEN_TO_BE_REPLACED 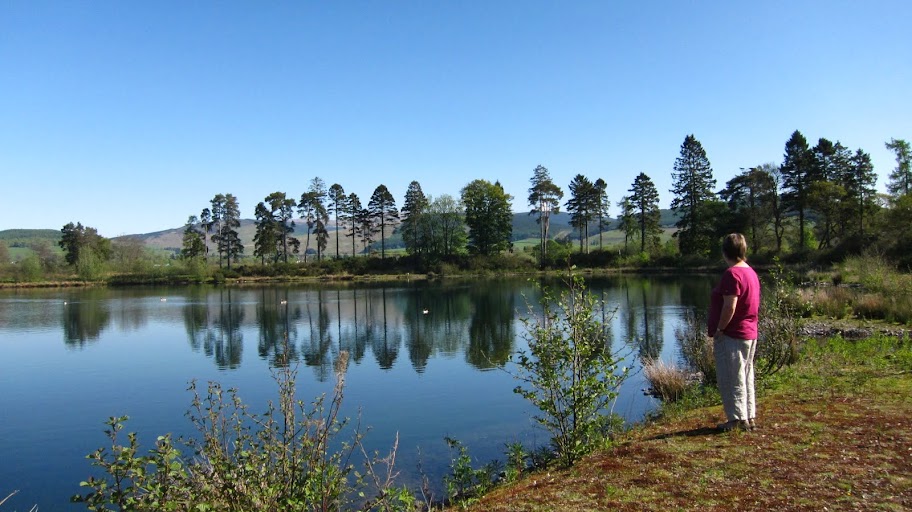 Our couple of days in the Scottish borders was centred on a visit to the Garden of Cosmic Speculation,  but we had time to explore a bit further this truly beautiful and peaceful part of the country, that previously we had only sped through on our way north. Just outside Moffat, where we stayed at the excellent bed & breakfast Marchbankwood House, and ate superb evening meals at the Buccleuch Arms Hotel, is the Dyke Farm Nature Reserve.  This tranquil spot (above), alive with birdsong and water fowl, was formerly a working sand and gravel quarry.

During our short stay we walked the steep trail that leads up out of Moffatdale, past the Grey Mare’s Tail waterfall towards Loch Skene.  Though the sky was cloudless, the wind that has been blowing steadily from the east during these anticyclonic days was fierce. Some of Scotland’s best-known writers have visited Grey Mare’s Tail.  Walter Scott fell off his horse there, and later wrote in Marmion:

Then issuing forth one foamy wave,
And wheeling round the giant’s grave
White as the snowy charger’s tail
Drives down the pass of Moffatdale. 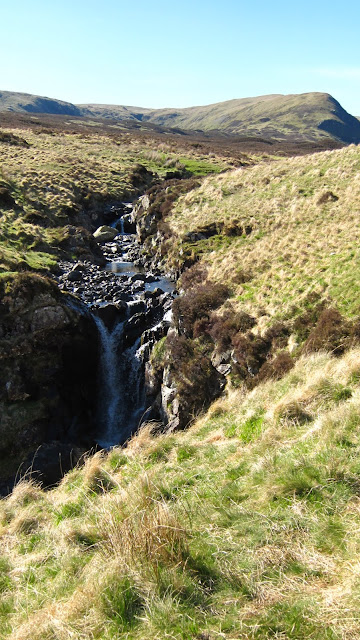 In 1789, a not-too-happy Robert Burns stayed at Craigieburn, a farm on the road from Moffat, later immortalising the place in verse:

Sweet fa’s the eve on Craigieburn,
And blythe awakes the morrow;
But a’ the pride o’ Spring’s return
Can yield me nocht but sorrow.

I see the flowers and spreading trees,
I hear the wild birds singing;
But what a weary wight can please,
And Care his bosom wringing!

Craigieburn is now a Nepalese garden open to the public: we visited there on the morning we left Dumfries (below). 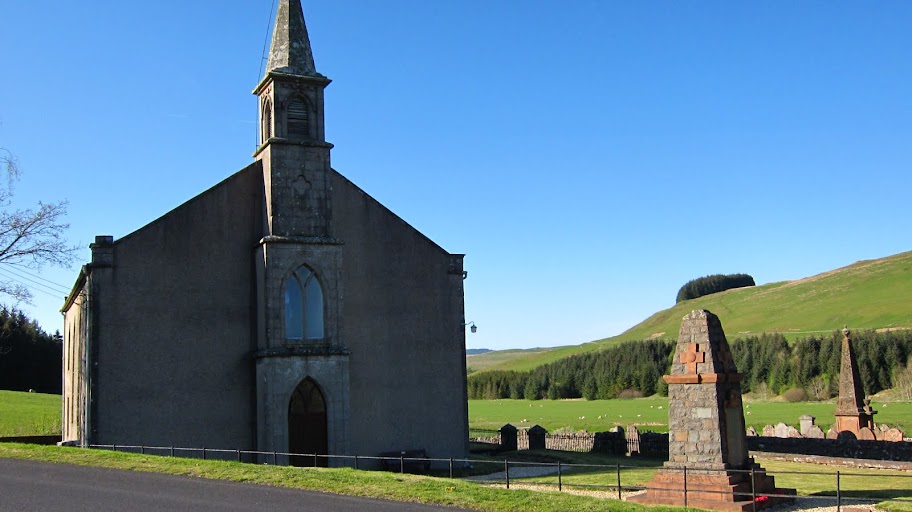 On Sunday we drove up from Dumfries on a road of stunning beauty, via Boreland, to Eskdale, where the lonely church of Eskdalemuir stands at the junction of two moorland roads.  The First World War memorial there records that around twenty of the men from the village, including the vicar, did not return from the trenches.  The impact on this small community must have been devastating. 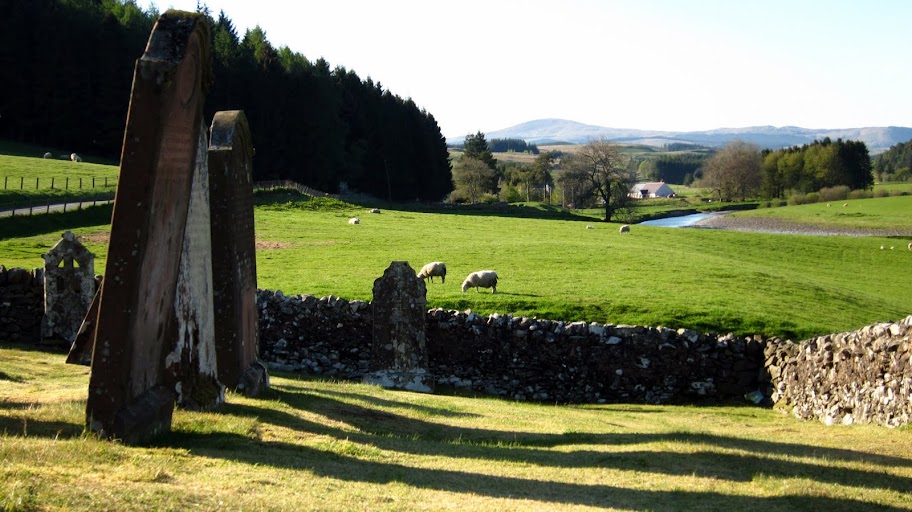 Further along the valley is the Samye Ling Tibetan Buddhist monastery. It was established in 1967 in a local farmhouse and has grown into a flourishing monastery and centre for the promotion of Tibetan Buddhism, arts, medicine and culture. The magnificent temple, made with modern materials but following traditional design, was built entirely by volunteers and is the focal point for the expanding community. Visitors are welcome to the monastery and gardens, and though there is still a good deal of construction work still underway, there is a feeling of peace and tranquillity, particularly walking along the Esk riverbank. 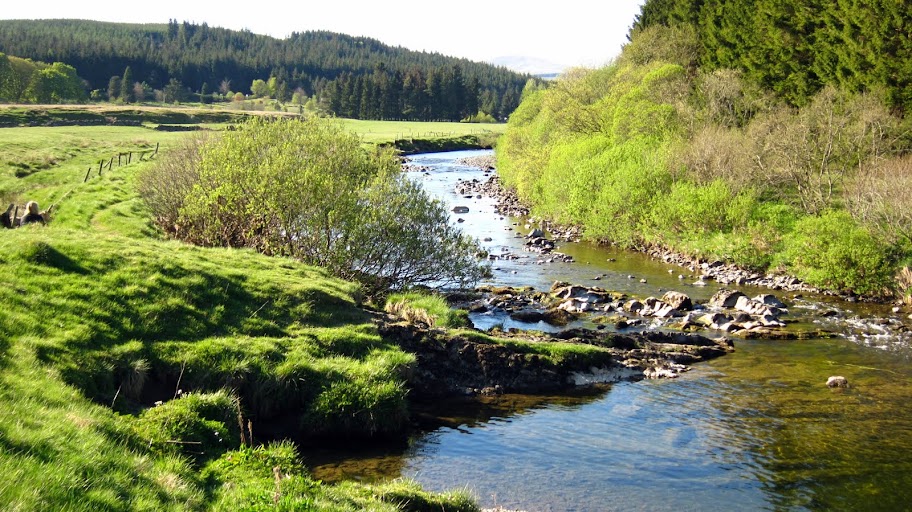 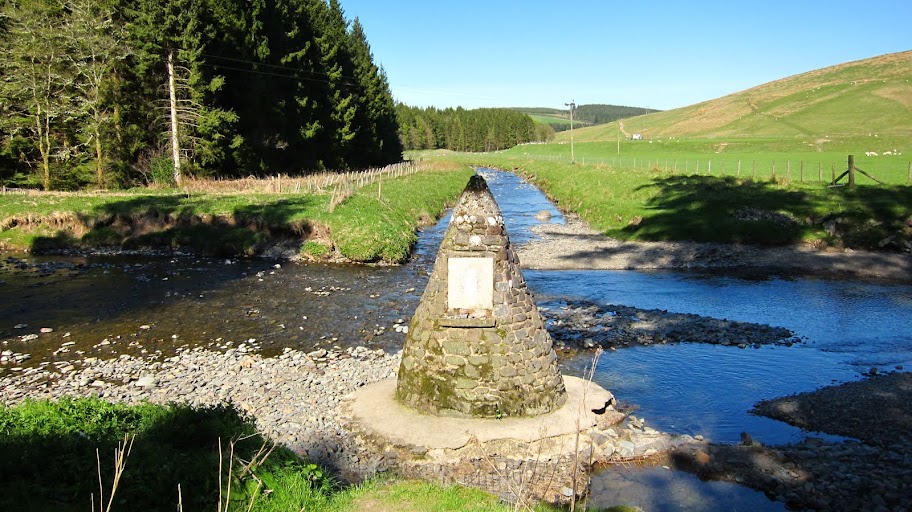 The story of the monastery is interesting.  40 years ago, Akong Rinpoche, a young Tibetan man, arrived at Eskdalemuir, where the engine of the car in which he had been travelling packed up, never to start again. Akong Rinpoche had lived an extraordinary life. Taken from his parents at the age of three, he had been declared a tulku, or reincarnated lama, and was raised in a monastery in a remote region of Tibet. In 1959 he was among a group of 300 who had decided to escape Tibet and flee to India – but many died of cold and hunger and only 13 of the refugees survived the journey. 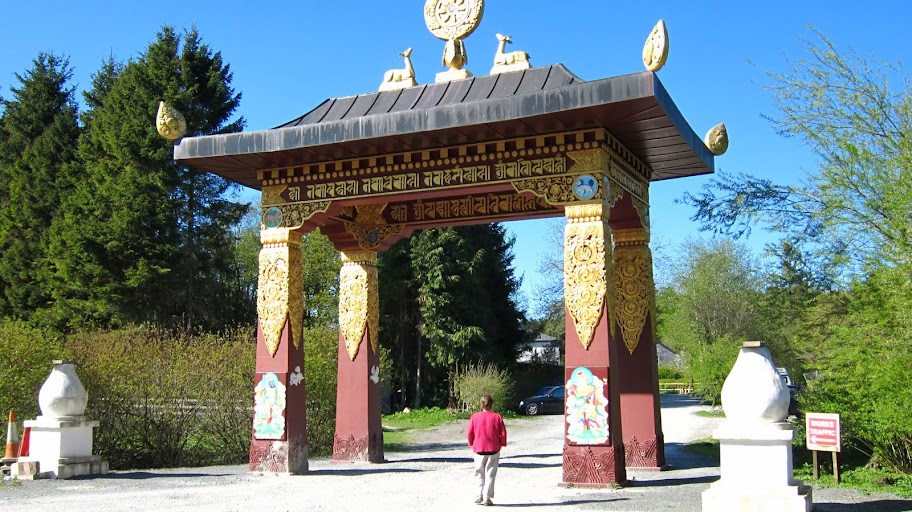 Akong eventually made it to Britain, and by 1967 was living in Oxford.  It was then that Akong set out to visit the place which was to become Samye Ling, the first Buddhist monastery in Europe. In the early years it was often frequented by hippies and David Bowie, Leonard Cohen (who went on to become a student of Zen Buddhism), John Lennon and Yoko Ono and members of the Incredible String Band all spent time here. 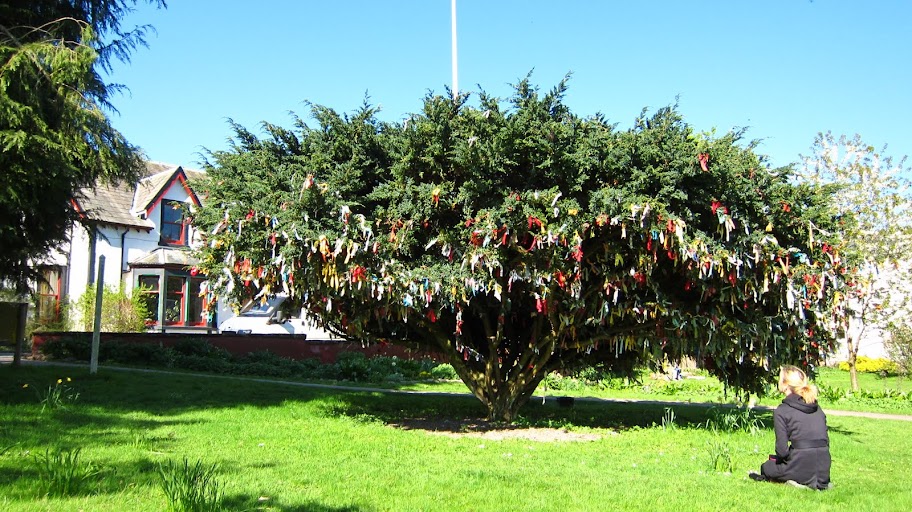 Samye Ling describes itself as ‘a centre for wisdom and learning within the Karma Kagyu tradition of Tibetan Buddhism, open to people of all faiths and none’.  In 1992 the Buddhists bought Holy Island, off Arran, which is being developed as a centre for world peace under the auspices of Lama Yeshe Rinpoche, Akong’s brother. 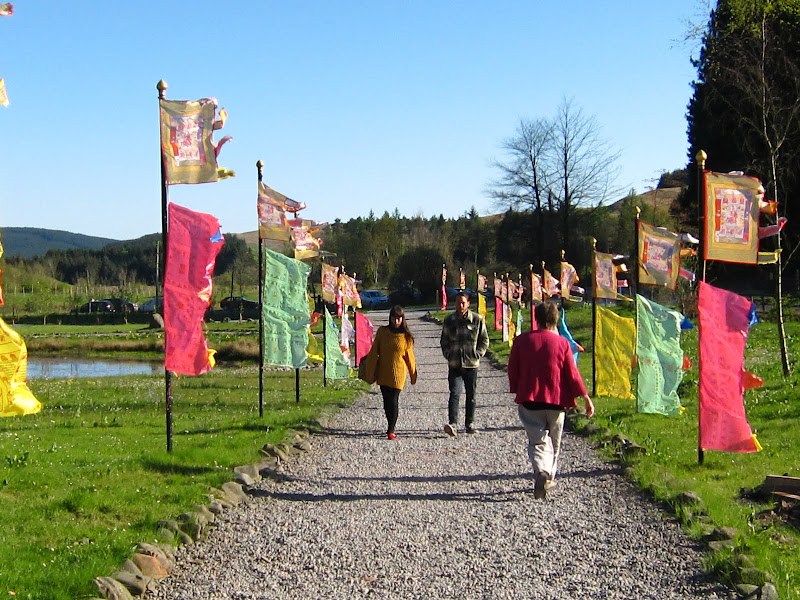 Finally, before we set off back down the motorway to Liverpool, we visited Craigieburn Garden and Nursery, just a few miles outside Moffat on the A708 to Selkirk. Craigieburn is an ancient site: people have lived on this pocket of land for more than five thousand years, and the remains of an iron age fort can be found here.  In the unsettled times of clan wars there was a fortified farmhouse and tower here, then, in 1717, a new mansion was built, with stables and a coach house added towards the end of the 18th century, when the first pleasure gardens were laid out. 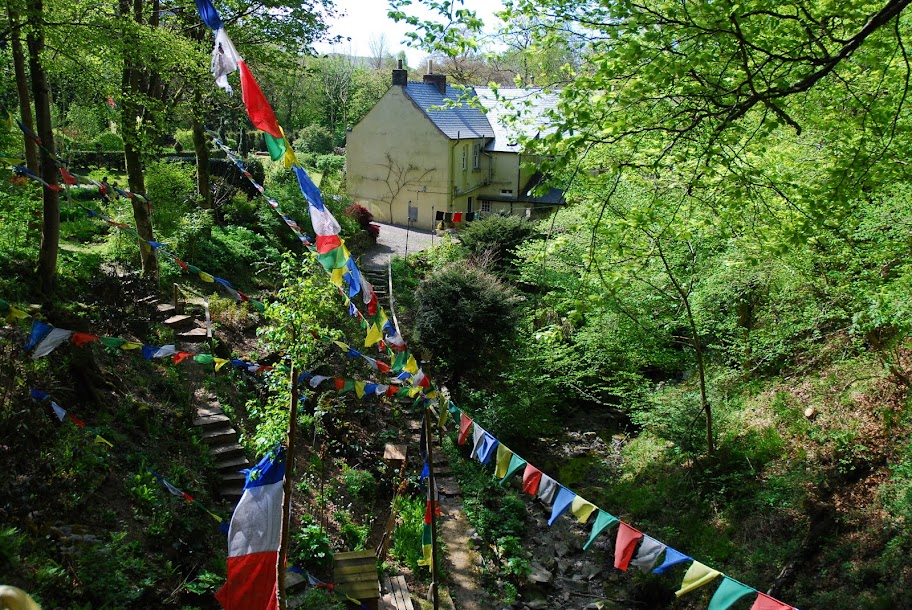 Today’s garden has been created by Janet Wheatcroft and Dawa Sherpa, a Nepali Buddhist from a village in the Himalayan foothills below Mount Everest.  The two met when Dawa saved Janet’s life when she was in Nepal on a botanical expedition. 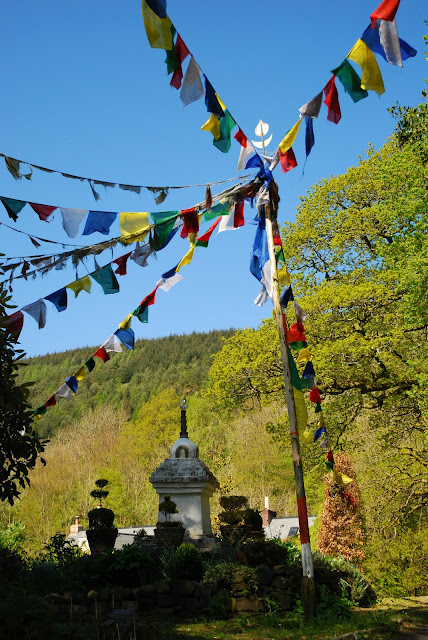 Together they have transformed the garden at Craigieburn into Nepali garden, carved out of the gorge with its tumbling stream that runs past the house.  The foothills of the Himalayas  have a summer climate very similar to that of south-west Scotland, with abundant rainfall and high air-humidity. That, and the fact that the site echoes that of the riverside gorge that runs through Dawa’s home village of Khari Khola, triggered the idea of a garden on Nepali lines. 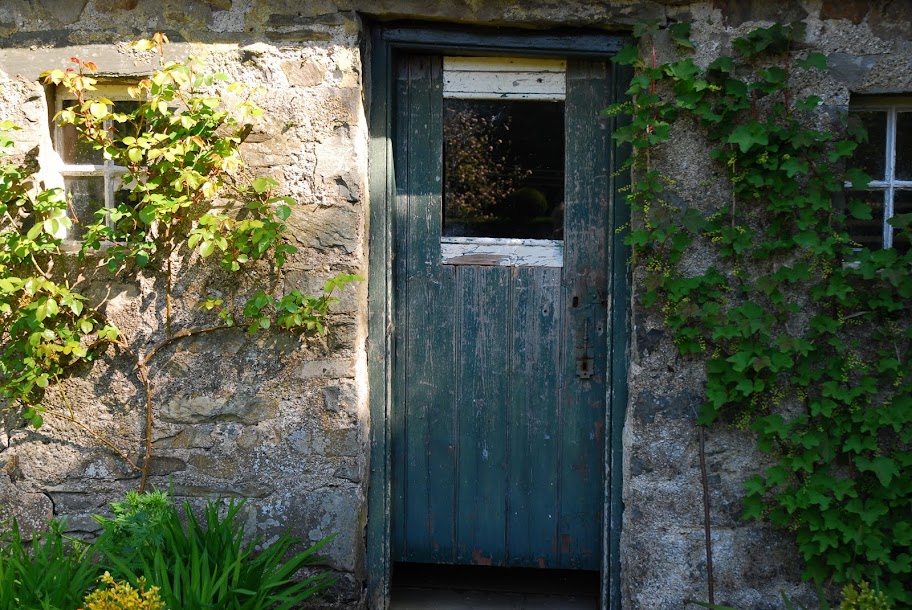 Dawa is a Buddhist, and you find many echoes of this in the garden. There are strings of prayer flags, water-powered prayer wheels (below) and a Sherpa house, furnished like Dawa’s home in the Himalayas (above). 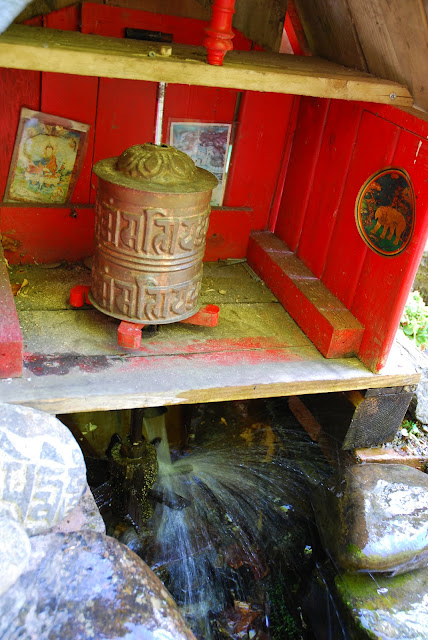 The garden is a blend of formal and informal.  There are rhododendrons, sumptuous Himalayan Blue Poppies, and Giant Himalayan Lilies, growing as profusely as on their home ground.  The area around the house is formal, with clipped box and yew, classic herbaceous plants and climbing roses intertwined with clematis. 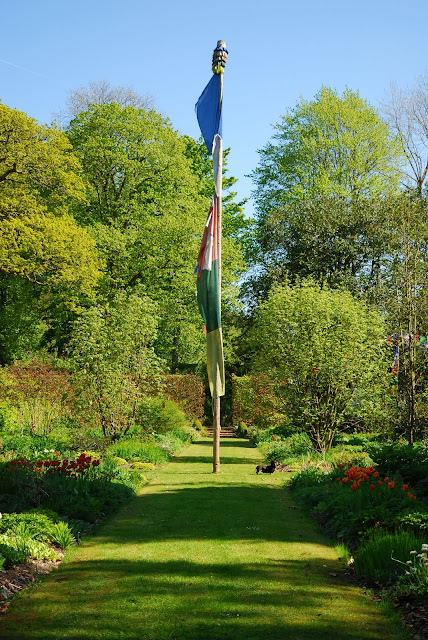 By contrast, the waterfall walk up the ravine is a fairly wild part of the garden, planted with shrubs and tough plants.

Janet and Dawa also sell what they grow for the garden at Craigieburn – there is a nursery with a wide range of desirable herbaceous plants, many of them quite hard to find.  And there’s a cafe, where we enjoyed a huge pot of tea and some very fine home-baked scones.