After seeing the Kurt Jackson exhibition in Truro, we drove back towards Crackington and stopped for lunch in Boscastle, now fully recovered from the devastating flood in 2004.   The Pixie House, where we had lunch, has been completely rebuilt in its original unique style and the harbour-side showed many signs of the regeneration work that is now complete.  A new, less flood-prone bridge (below) has replaced the one swept away, and the car park is now resurfaced to better absorb any future floodwaters. 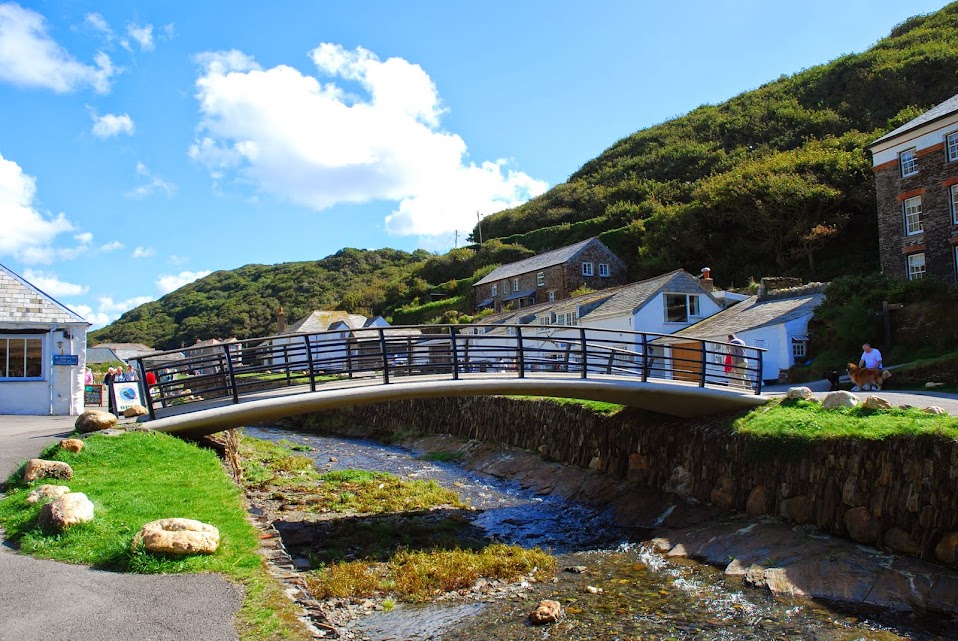 The Pixie House dates from the 16th century; it was bought by the present owner in 1957 for £71 6s 6d when it was a piggery.  In the 2004 flood a camper van, one of multitude of cars swept down from the car park as 440 million gallons of water cascaded down the main street at 40 miles an hour, clipped the corner of the building and the slate-roofed cob structure – made of a mixture of sand, straw, water and earth – collapsed.  As my photo shows, it has been restored to its former glory, though on slightly higher ground. 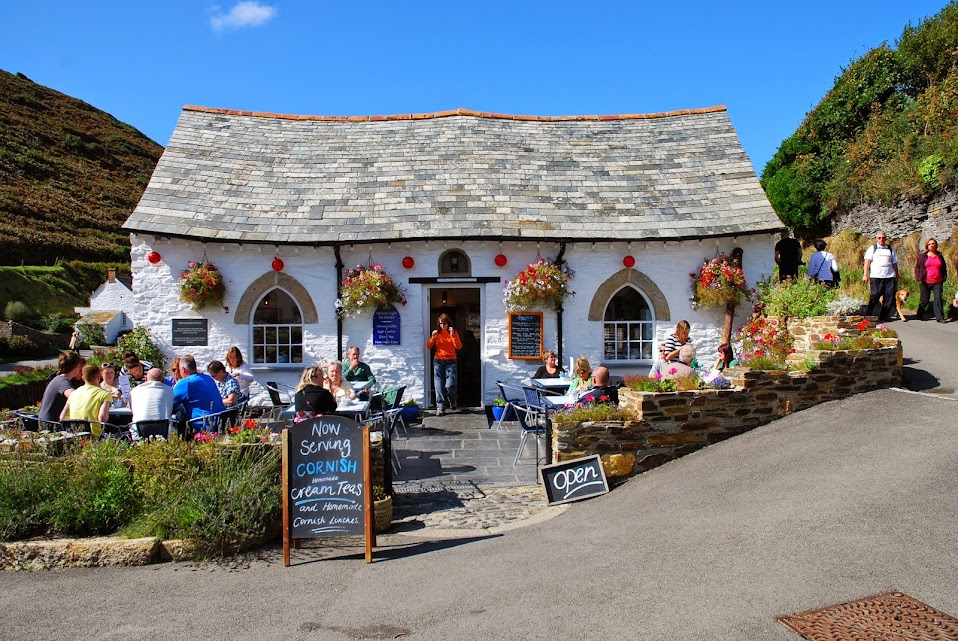 The Pixie House at Boscastle

From midday on 16 August 2004, torrential rain fell on an area of North Cornwall from Tintagel to Bude, with unprecedented heavy rainfall concentrated around Boscastle. More than two inches of rain fell in under two hours and the three rivers that converge on Boscastle burst their banks at around 4 pm.

Trees were ripped out of the ground, cars, vans and caravans were carried away in the churning waters that raged towards the harbour from the burst banks of the River Valency, which today ran tranquilly alongside the Boscastle car park. In the wall of water, debris and mud, vehicles were hurled over the road bridge and down the sides of the harbour towards the sea. The devastation was quick: the wavy-roofed three hundred year old Pixie House was washed away completely by the force of water and debris pounding it. Fifty cars were carried out of the car park by the raging waters and into the harbour. 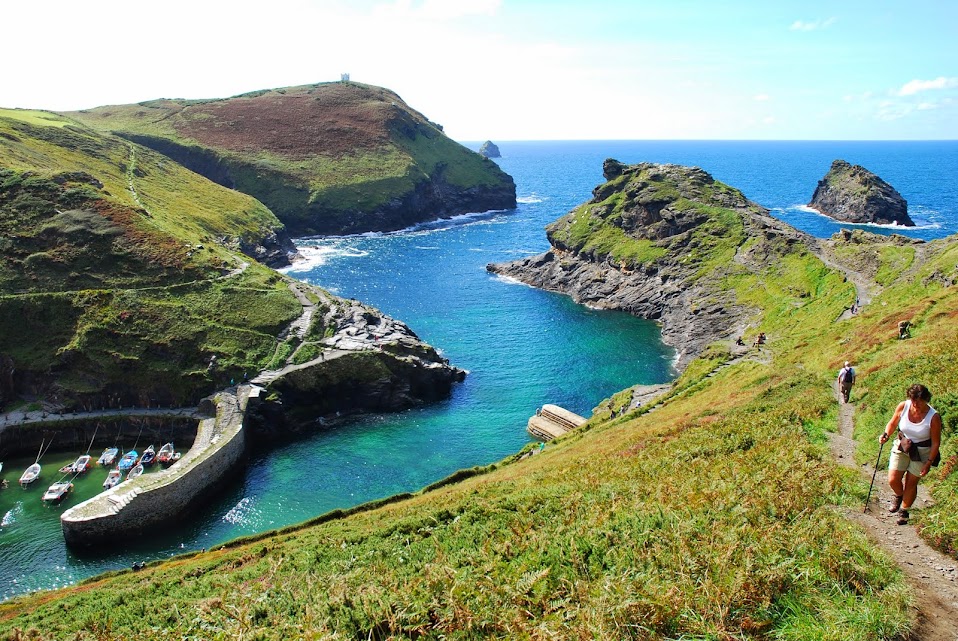 After lunch we set out on the coast path, climbing up above the harbour, a natural inlet protected by two stone harbour walls built in 1584. It is the only significant harbour for 20 miles along this rugged coast. As well as being a fishing harbour, Boscastle was once a small port importing limestone and coal and exporting slate and other local produce. 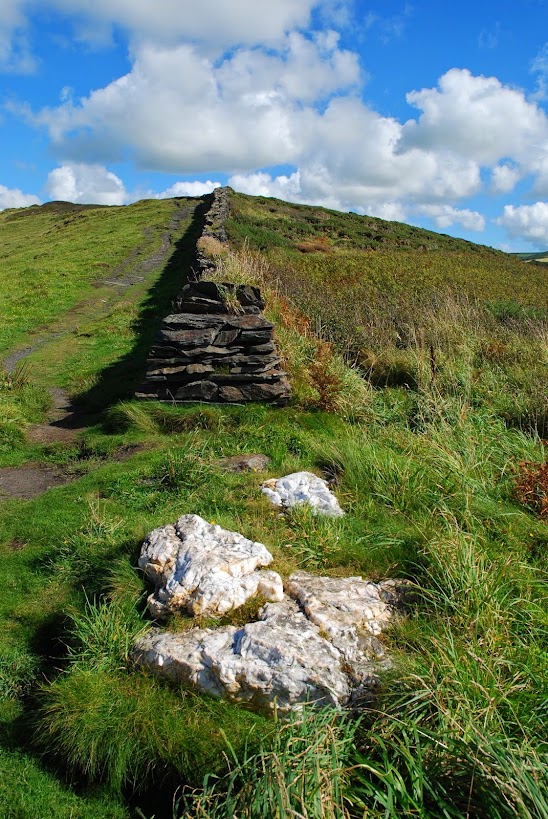 Out on the coast path, views of Beeny Cliff soon appeared in the distance.  Below Beeny is a waterfall that cascades from a high shelf above the rocky beach at Pentargon, a grey scar brutally slashed into the green of the coastline. 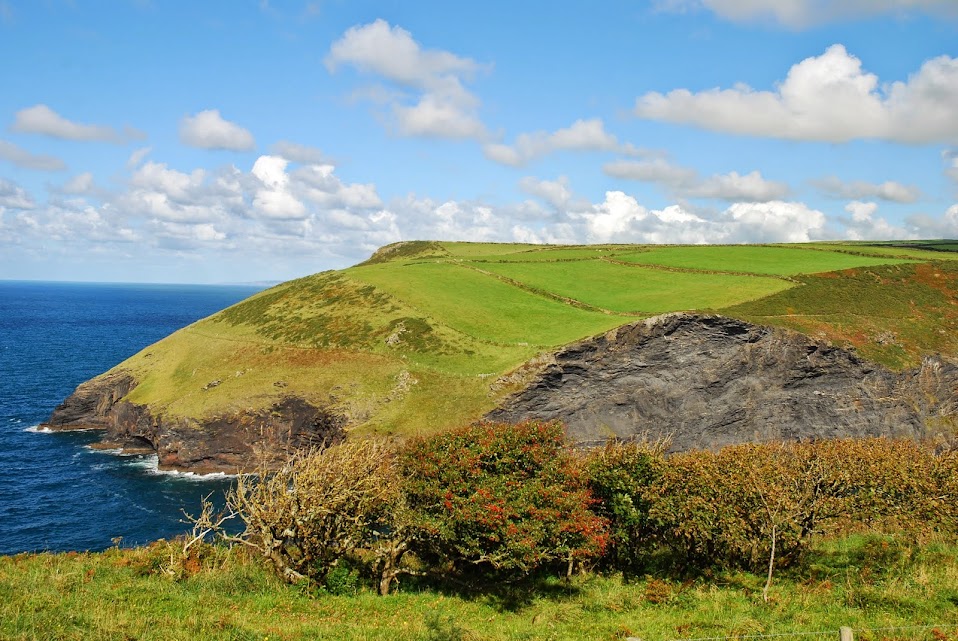 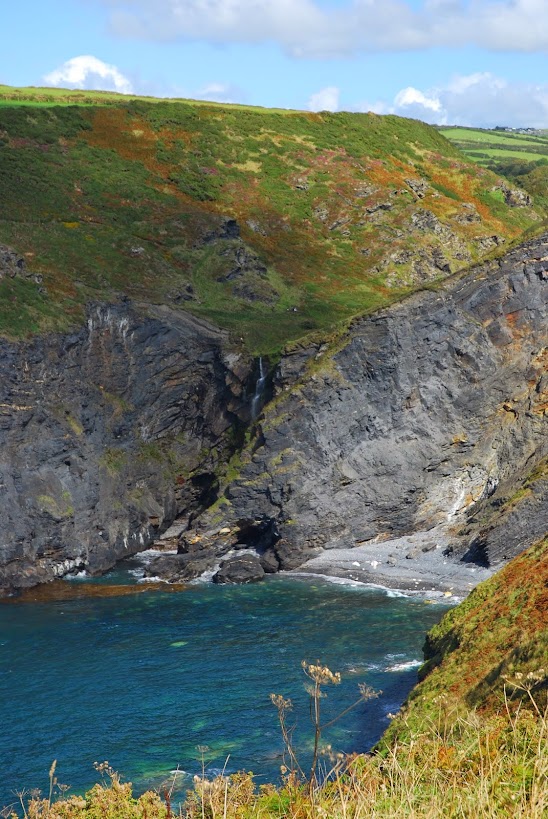 Both these places have associations with Thomas Hardy.  As we walked, Rita explained the background to me, since I was unaware of Hardy’s Cornish connections.  As a young architect, Hardy came in 1870 to restore the church of St Juliot. His work brought him into contact with the rector’s sister-in-law, Emma, who lived at the rectory.  Despite a conventional upbringing, she was a lively free-thinker, vivacious and eager to escape her life in the vicarage. They fell in love and married in September 1874. 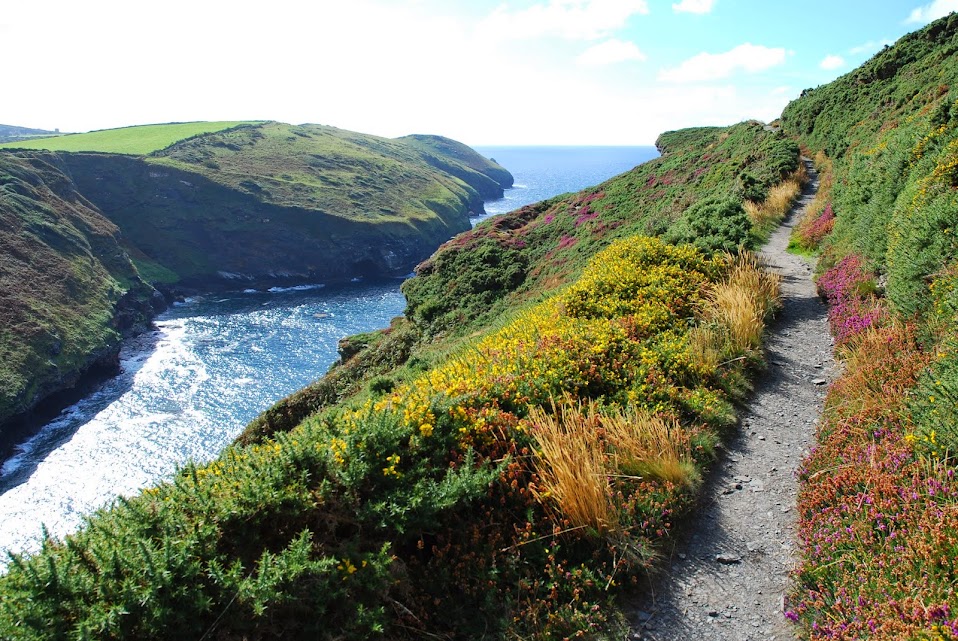 Hardy’s early novel A Pair of Blue Eyes, although place names are disguised, is steeped in the atmosphere of this area and his love for Emma. However, their marriage was a strange and unhappy one. With the publication of Jude the Obscure, Emma was outraged at what she took to be his attack upon the sanctity of marriage and feared that people would consider the novel to be autobiographical.  Their lives grew apart, with Emma living alone on a separate floor at Max Gate, the house that Hardy built in Dorchester, while Hardy had flirtatious relationships with other women.  On the morning of the day she died in 1912, her maidservant reported to Hardy that Emma was not well, but he did not go to see her. 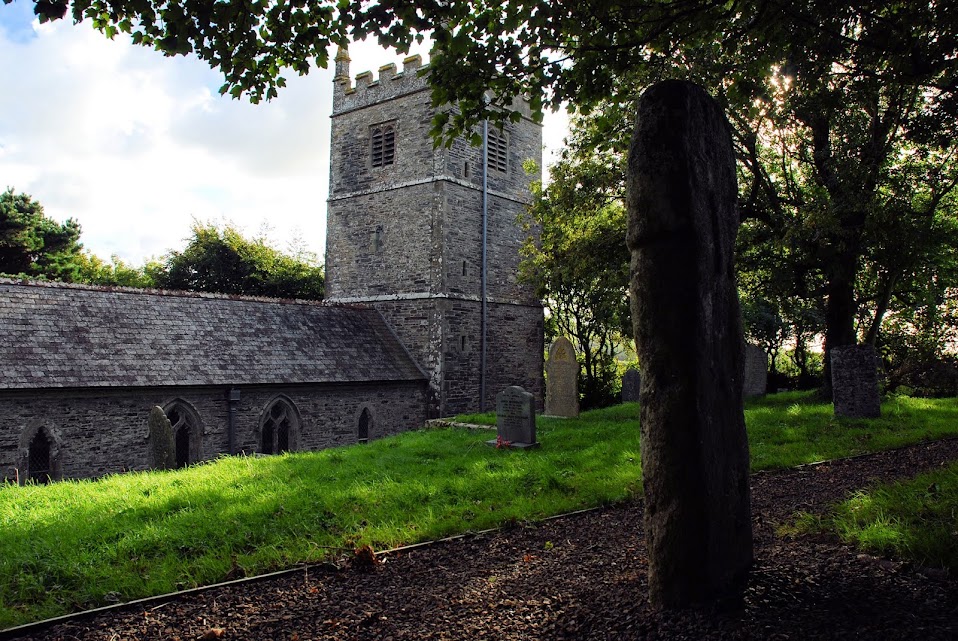 You arrive at St Juliot church after following deep, winding lanes with grass growing up the middle.  The place seemed extraordinarily isolated, set amidst a sweep of fields with no evidence of the human habitation that must have led to the establishment of a church in a parish in the 14th century.

When Hardy arrived here in 1870 he found the church in a parlous condition, with the 14th century tower in a ruinous state, and the whole building in ‘irredeemable dilapidation’. Emma herself recorded that ‘the carved bench ends rotted more and more , ivy hung gaily from the roof timbers and birds and bats had a good time unmolested. No one seemed to care’.

In the process of renovation, the northern transept was destroyed, along with much of the old woodwork and a Jacobean Pulpit. Hardy himself regretted later that so much had been destroyed. There is a memorial tablet (below) recording Hardy’s association with the church,  installed in 1928. 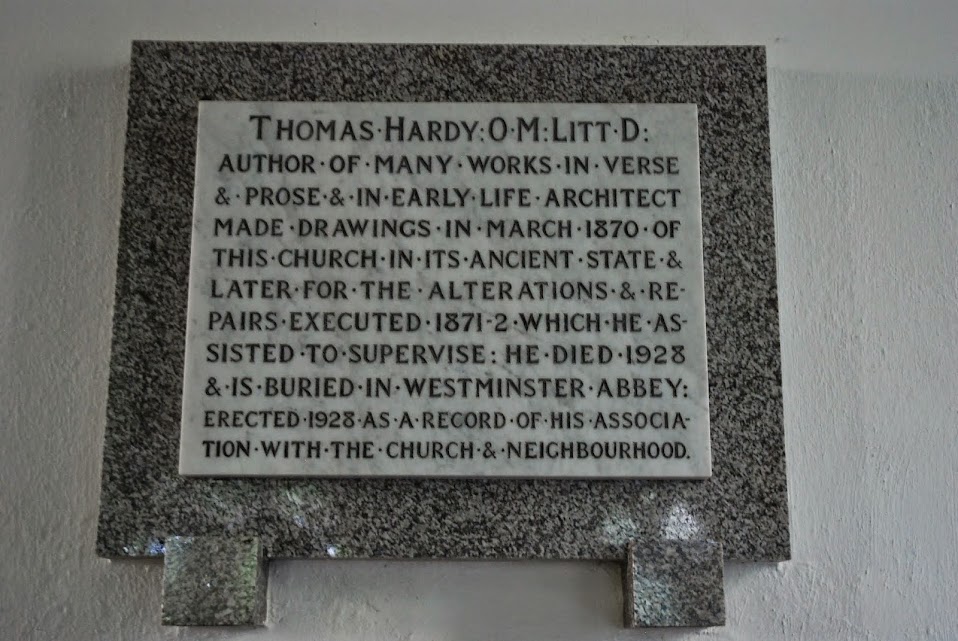 Thomas Hardy: A Dream or No

Why go to Saint-Juliot? What’s Juliot to me?
I’ve been but made fancy
By some necromancy
That much of my life claims the spot as its key.

Yes. I have had dreams of that place in the West,
And a maiden abiding
Thereat as in hiding;
Fair-eyed and white-shouldered, broad-browed and brown-tressed.

And of how, coastward bound on a night long ago,
There lonely I found her,
The sea-birds around her,
And other than nigh things uncaring to know.

So sweet her life there (in my thought has it seemed)
That quickly she drew me
To take her unto me,
And lodge her long years with me. Such have I dreamed.

But nought of that maid from Saint-Juliot I see;
Can she ever have been here,
And shed her life’s sheen here,
The woman I thought a long housemate with me?

Does there even a place like Saint-Juliot exist?
Or a Vallency Valley
With stream and leafed alley,
Or Beeny, or Bos with its flounce flinging mist? 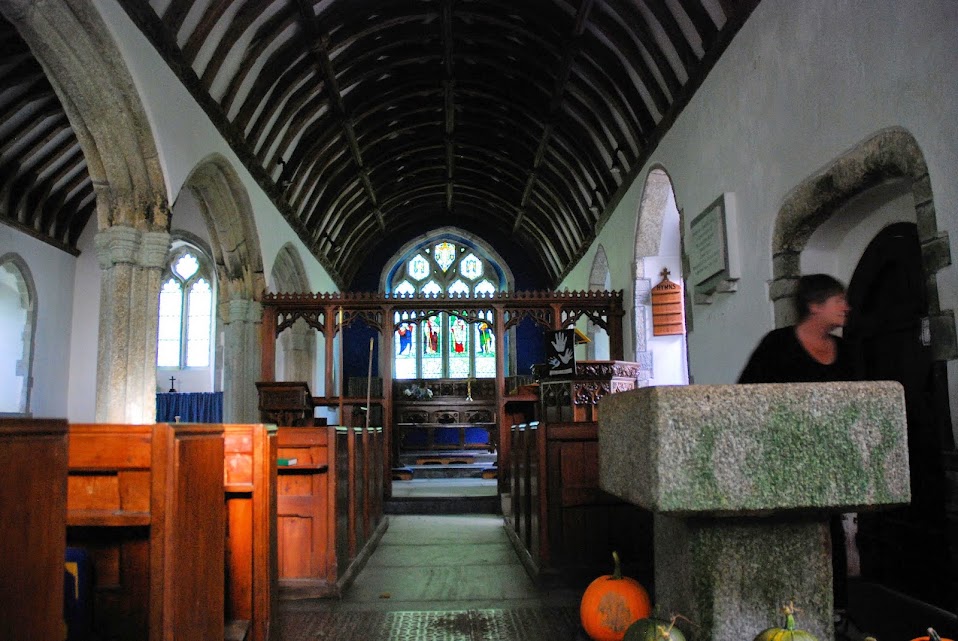 After Emma’s death, Hardy was consumed by remorse which resulted in some of his most beautiful poetry, in memory of the love they had once shared.  Later, he had a memorial stone commissioned and placed on the north wall of St Juliot Church (below). 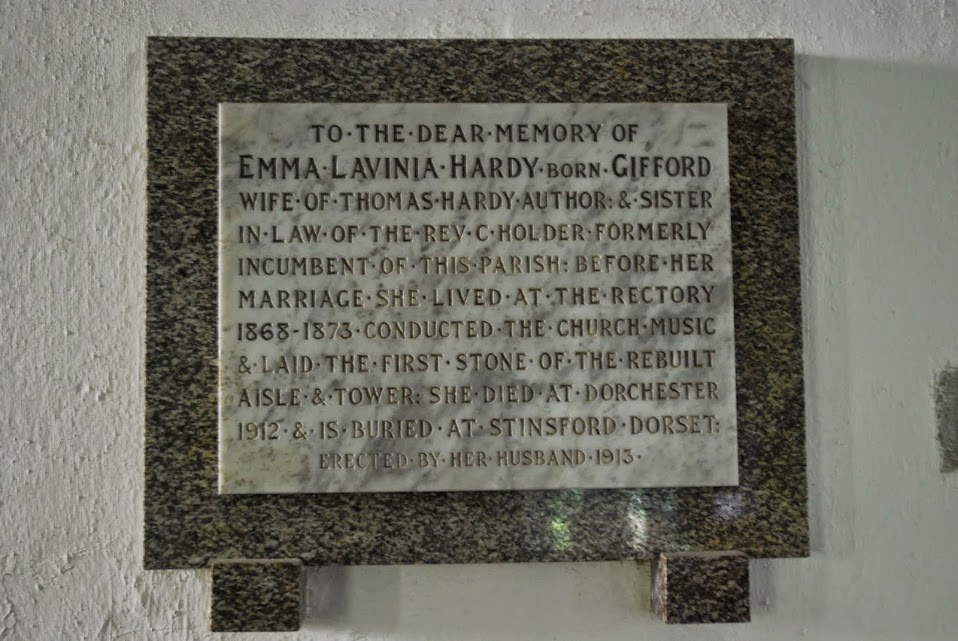 Hereto I come to interview a ghost;
Whither, O whither will its whim now draw me?
Up the cliff, down, till I’m lonely, lost,
And the unseen waters’ ejaculations awe me.
Where you will next be there’s no knowing,
Facing round about me everywhere,
With your nut-coloured hair,
And gray eyes, and rose-flush coming and going.

Yes: I have re-entered your olden haunts at last;
Through the years, through the dead scenes I have tracked you;
What have you now found to say of our past –
Viewed across the dark space wherein I have lacked you?
Summer gave us sweets, but autumn wrought division?
Things were not lastly as firstly well
With us twain, you tell?
But all’s closed now, despite Time’s derision.

I see what you are doing: you are leading me on
To the spots we knew when we haunted here together,
The waterfall, above which the mist-bow shone
At the then fair hour in the then fair weather,
And the cave just under, with a voice still so hollow
That it seems to call out to me from forty years ago,
When you were all aglow,
And not the thin ghost that I now frailly follow!

Ignorant of what there is flitting here to see,
The waked birds preen and the seals flop lazily,
Soon you will have, Dear, to vanish from me,
For the stars close their shutters and the dawn whitens hazily.
Trust me, I mind not, though Life lours,
The bringing me here; nay, bring me here again!
I am just the same as when
Our days were a joy, and our paths through flowers.

O the opal and the sapphire of that wandering western sea,
And the woman riding high above with bright hair flapping free –
The woman whom I loved so, and who loyally loved me.

The pale mews plained below us, and the waves seemed far away
In a nether sky, engrossed in saying their ceaseless babbling say,
As we laughed light-heartedly aloft on that clear-sunned March day.

A little cloud then cloaked us, and there flew an irised rain,
And the Atlantic dyed its levels with a dull misfeatured stain,
And then the sun burst out again, and purples prinked the main.

– Still in all its chasmal beauty bulks old Beeny to the sky,
And shall she and I not go there once again now March is nigh,
And the sweet things said in that March say anew there by and by?

What if still in chasmal beauty looms that wild weird western shore,
The woman now is – elsewhere – whom the ambling pony bore,
And nor knows nor cares for Beeny, and will laugh there nevermore. 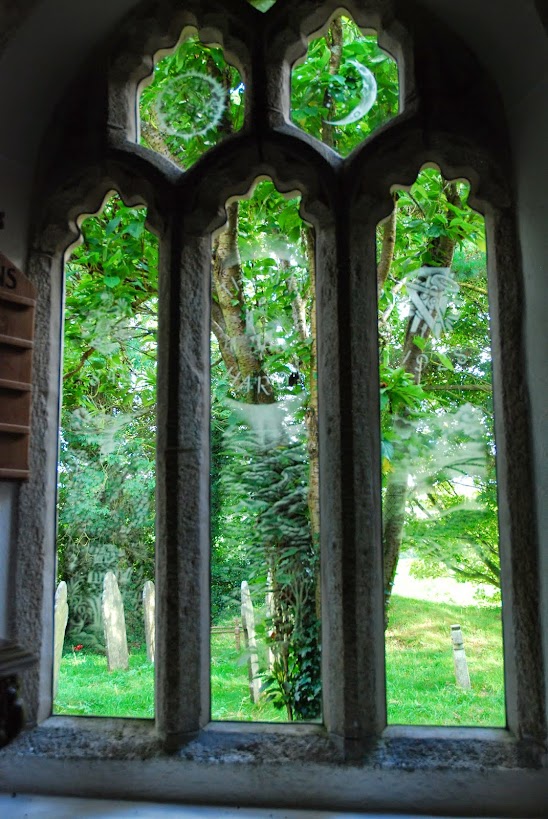 The Thomas Hardy Memorial Window in St Juliot Church (above) was commissioned by the Thomas Hardy Society to mark the millennium.  The window seeks to illustrate three of Hardy’s poems. The central light symbolises Hardy’s journey from Dorset to Cornwall in 1870 and contains lines from the poem ‘When I set out for Lyonnesse’; the left-hand light illustrates the incident by the stream in the Valency Valley below the church where, picnicking, Hardy and Emma lost a drinking glass in the stream, an incident which Hardy recalls in ‘Under the Waterfall’; and the right hand illustrates the poem ‘Beeny Cliff’, a couple of miles west of St Juliot.