I have two strong memories associated with the Norwegian saxophonist Jan Garbarek, who is celebrating his 70th birthday today. The first is of discovering his LP Folk Songs, the first of his albums that I bought, and the one that opened up the world of music recorded by Manfred Eicher on the ECM label. The second memory is of listening to a specific Garbarek tune in a particular place, symbolizing for me a moment of European optimism.

Jan Garbarek was born in Mysen, Norway, the only child of a former Polish prisoner of war, Czesław Garbarek, and a Norwegian farmer’s daughter. He grew up in Oslo, stateless until the age of seven, as there was no automatic grant of citizenship in Norway at the time. I find it instructive that the man with that history should today be one of Norway’s best-known cultural assets.

In an interview published on the Norwegian American website in 2009, Garbarek recalled how he began to take an interest in music, and in jazz particularly:

I had absolutely no fascination for music in itself, except as, you know, it’s fun to dance with the girls when you are twelve, thirteen years old and so on; to some old Elvis records or whatever at the time. But then, of course, I heard Coltrane on the radio and it changed everything. That’s like a very serious moment in my life. I had been out with my friends, you know, and I came in, because it was getting dark probably and I heard this music; something made me stop, you know, this is something very special. And after the music was finished the presenter said, this was the end of the weekly ‘jazz-hour’ … so I knew it was jazz. And then I found out that what they actually played on the radio at that moment was an excerpt from John Coltrane’s new album Giant Steps and it was a piece called ‘Countdown’. And then eventually I found this album and it was on my record player every morning for at least a couple of years, before I went to school, at breakfast I listened to Giant Steps, every day. I immediately started hassling my parents for a saxophone, of course, and finally I succeeded about half a year later they got me one for Christmas. As I found out later, a very old and bad instrument.

In 1962, Garbarek won a competition for amateur jazz players, a success that lead to his first gigs. He worked steadily in Norway throughout the remainder of the 1960s, usually as a leader but also served four years in the band led by American drummer George Russell (who was based in Scandinavia for a long stretch). He was one of the first to record for Manfred Eicher’s new ECM label: Afric Pepperbird was the seventh LP issued by the company.

That was an album I worked my way back to, probably like a lot of Garbarek fans who picked up on his icy tone, long tones and liberal use of space in his compositions that seemed to evoke empty northern landscapes. Consequently, Afric Pepperbird was a big surprise with its crisply-recorded tunes influenced by free jazz, particularly the work of Albert Ayler. Today, it remains a thrilling collection, very unlike the sound we came to associate with Garbarek, driven forward by Arild Andersen’s energetic bass.

From that first album for ECM, Garbarek has maintained a remarkable unboken association with the label. Condemned by some for abandoning the style of his early albums and collaborations for the instantly recognisable Nordic sound that began to emerge in the 1980s, it is undoubtedly true that his track record is that of an adventurous musician, reflected in the wide variety of projects he has continued to involve himself through subsequent decades. 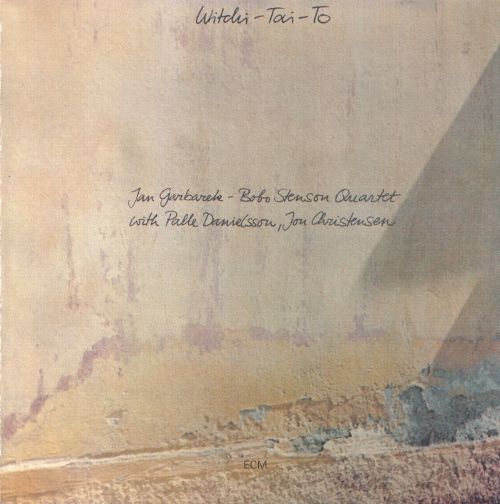 Jan Garbarek’s career pivots on what many regard as his masterpiece – 1974’s Witchi-Tai-To.  the quintessential Garbarek album for those who normally don’t care for his style. Considered one of the finest jazz albums that ECM ever released, and simply one of the very top jazz albums of the 1970s, Witchi-Tai-To consists almost entirely of cover versions of tunes by composers at the forefront of the jazz avant-garde (Carla Bley, Jim Pepper, Don Cherry) and whilst, especially on the long closing track, Garbarek’s sound is imbued with Coltrane’s spirit, on others it is beginning to sound like the instantly recognisable Garbarek of later albums.

More gems followed from his association with Keith Jarrett’s European quartet in the mid-1970s, resulting in the indispensable recordings My Song and Belonging. In the following decade, Garbarek’s albums featured luminaries such as bassist Eberhard Weber guitarists Bill Frisell, John Abercrombie and Ralph Towner, and percussionist Nana Vasconcelos. There were adventurous collaborations – for example, on Dis (1977) with Ralph Towner who played not only 12-string and classical guitar, but also the wind harp, an instrument whose strings are brought to vibrate by the wind, creating tones and overtones which are enhanced in a resonant body, recorded on the coast of Norway, utilising gusts of wind coming in off the North Sea.

Which brings me to the first of my personal Garbarek memories. It’s a Saturday in the early 1980s and I’m in Decoy Records on Manchester’s Deansgate, a place where we would frequently go in order to find not only jazz, but also interesting new releases of blues, r&b, and world music. Flicking through the vinyl, I’m arrested by the striking, striped cover of Folk Songs, his 1979 collaboration by bassist Charlie Haden, Jan Garbarek on tenor and soprano, and Egberto Gismonti (guitar and piano). I like the look of it and it becomes the first ECM album I bought, and the first time I heard Jan Garbarek’s plangent saxophone – thus
occupying a special place in my heart. At home, I discover it’s a record on which all three partners excel: airy and atmospheric music that crosses the boundaries between jazz and folk music from different lands, topped off with Garbarek’s lyricism.


After that there was no looking back. Purchases such as Dis, Paths Prints, It’s Okay to Listen to The Gray Voice, Legend of the Seven Dreams, and I Took Up The Runes followed, each weaving a spell conjured from ethereal soundscapes and stark, spacious arrangements. The cumulative effect was like journeying through a northern landscape of forests, lakes and moors, with Garbarek’s saxophone sound as pristine as the surrounding air. There was a reason for these sensations: Garbarek was drawing increasingly upon traditional Nordic musical forms for his inspiration.

Legend of the Seven Dreams (1988), for instance, opens with ‘He Came From the North,’ which features a beautiful melody based on a traditional Sami joik from the north of Norway, while later in the collection the pairing of ‘Brother Wind’ and ‘It’s Name is Secret Road’ evokes open landscapes with no fences facing. Two years later, on I Took Up The Runes, Garbarek repeated the trick: the album opens with a memorable cover of Norwegian Sami musician Mari Boine Persen’s ‘Gula Gula,’ before leading into the five-part suite ‘Molde Canticle,’ which draws upon various folk traditions whilst moving between languid passages and jaunty, marching tunes.


Revelling in these musical soundscapes, I snapped up Rosenfole, a collaboration with Norwegian folk singer Agnes Buen Garnås recorded in 1988. These days, collaborations between folk and jazz musicians are commonplace, but it’s indicative of Garbarek’s innovativeness that this album precedes other examples by at least a decade. On tenor and soprano saxophones, he adds an additional wordless voice to Agnes Buen Garnås’ interpretation of medieval songs from Norway.

Adventurous collaboration remained the hakllmark of Garbarek’s work into the 1990s. After appearing on Shankar’s terrific album Song for Everyone, alongside Shankar’s 10-String double violin, and Zakir Hussain and Trilok Gurtu on various percussion instruments, he joined Pakistani vocalist Ustad Shaukat Hussain and other Pakistani musicians on Ragas and Sagas, a fabulous album of beautiful melodies that is predominantly Pakistani in sound, tonality, and structure. That was followed by Madar, a collaboration with another lynchpin of the ECM catalogue, the Tunisian master of the oud, Anouar Brahem and tablaist Ustad Shaukat Hussain. A gorgeous album, it includes tracks based on Norwegian folk melodies and musical conversations that erode the boundaries between the three performers’ different traditions.

These were the same years in which Jan Garbarek probably gained the widest attention and record sales as a result of his collaboration with the Hilliard Ensemble, beginning in 1993 with Officium, and followed six years later with Mnemosyne. Some may have found a jazz saxophonist working with a vocal quartet singing Renaissance music distasteful; most found it sublime, especially when experienced live in a cathedral setting during one of the tours which followed.

By now, I’ve reached my second indelible memory of Garbarek: this time it’s one of listening to a specific Garbarek tune in a particular place. It symbolises for me a moment of European optimism which now seems very distant.

It was 1999, and I was teaching European Studies to adult students who were preparing to go on to university. Each year I would accompany a group on a visit to the EU institutions in Brussels, Luxembourg and Strasbourg. The preceding decade had seen the collapse of communism in eastern Europe, German reunification, the signing of the Maastricht Treaty, the establishment of the Single Market, the removal of border controls and the introduction of EU passports, and preparations for the introduction of the single currency, and the extension of European Union membership to the new democracies of central and eastern Europe. I can’t recall a moment of greater optimism.

I felt this intensely as, on our homeward journey, our coach sped across the recently-obliterated border between France and Belgium. On my headphones I was listening to ‘The Creek’ and ‘Red Wind’, the opening tracks on Garbarek’s 1995 album, Visible World. Something in the yearning and emotional beauty of the tunes chimed in that moment with my feelings as we traversed a border that had been fought over three times, but which we now passed in the blink of an eye, no passport required. The optimism of those years now seems a long time ago, a world away.

So, happy birthday, Jan, and thanks for those memories – and the albums, and the live shows that I’ve enjoyed. Happy 70th.

12 thoughts on “Celebrating Jan Garbarek on his 70th birthday”