Back in the 1990s, idly sifting through CDs in Probes Records, I stumbled across an album called A Meeting by the River that featured an Indian musician whose name was unknown to me: Vishwa Mohan Bhatt. But, drawn by Ry Cooder’s name I bought the record and once at home discovered a gem.

The Grammy award winning album is a masterclass of musical interplay, particularly outstanding considering that Cooder and Bhatt met for the first time only a half-hour before the recording. Most of all, though, it is the album’s mood of harmony and peace, a reverie of tranquillity, that enthrals the listener.

So when Vishwa Mohan Bhatt introduced his performance at the Capstone last Saturday night saying that his was as ‘music for meditation and  thepurification of the soul’ I expected a similar mood to follow.

I could not have been more mistaken. There were few opportunities for meditation during the concert that followed as we were assailed with music so over-amplified that my ears rang for hours after. Whether this was the local sound crew or VM Bhatt’s intention I have no idea, though what became apparent was that A Meeting by the River may not be wholly representative of Bhatt’s output or approach. 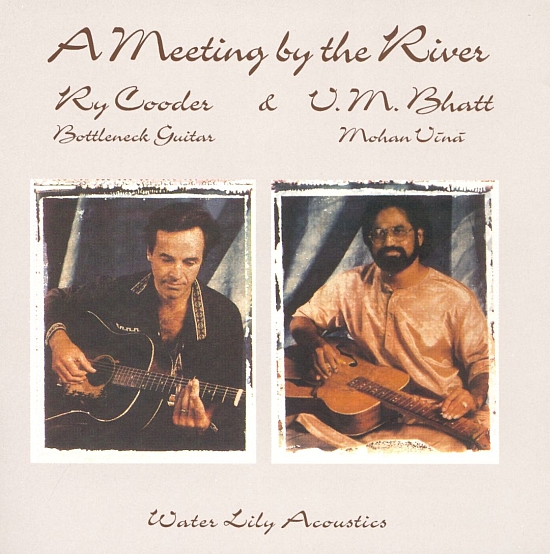 Accompanied by Rajkumar Misra on tabla, Bhatt let loose a series of fiery improvisations on his mohan veena, an instrument of his own invention, during which both strings and tabla mounted to repeated crescendos played with blinding speed and fierce energy. Though there were moments of repose, for most of the set I was reminded of John MacLaughlin’s Mahavishnu Orchestra albums which featured his blistering machine-gun assaults on double-necked electric guitar and Jerry Goodman’s flights on electric violin. 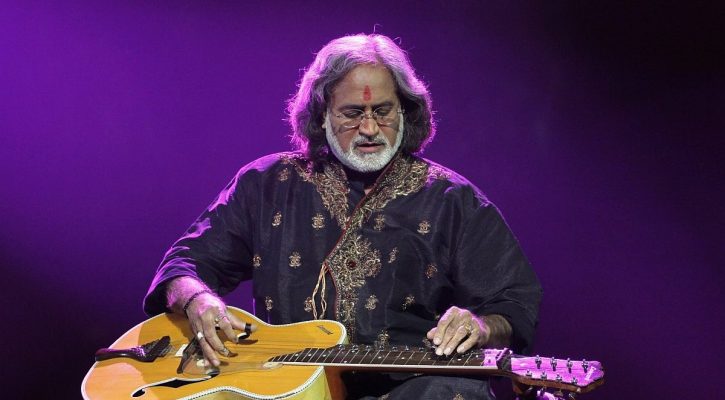 The instrument that Vishwa Mohan Bhatt plays is the Indian equivalent of the bottleneck or slide guitar – which is perhaps how he came to be introduced to Ry Cooder. His technique assimilates the styles of traditional Indian instruments such as the sitar, sarod and veena with those of western or Hawaiian guitar. In a recent interview, Bhatt explained how he came to design the mohan veena, the 20-string instrument of his own invention:

I was 14 years old when I saw a western guitar for the first time. It belonged to a German lady who had come to learn Indian music from my father. I was fascinated by it and bought it from her when she was leaving. I then Indianised the western instrument by removing the original six strings and incorporating new strings to suit the needs of Indian classical music. I was motivated by a desire to have a unique sound of my own and to create an instrument that could have the special sound and technique of various traditional Indian instruments such as the sitar, sarod and veena.

Since then, Bhatt has played this instrument for nearly 50 years and has performed in 81 countries. The technique that has mesmerised audiences around the world was amply demonstrated at the Capstone: it is one that combines passages of exquisite, delicate beauty with others of fiery improvisation and blinding speed. It’s a technique which has earned this disciple of Ravi Shankar the reputation as one of the most expressive slide players in the world. 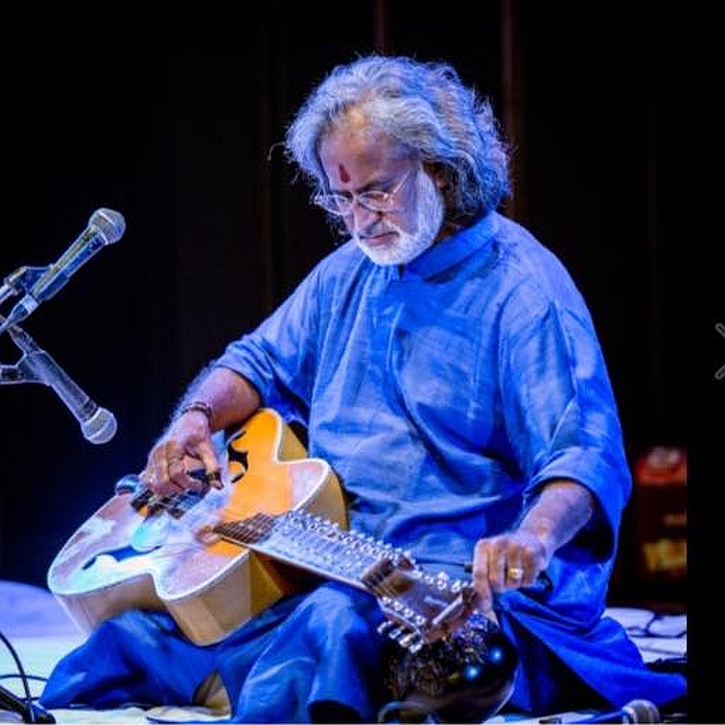 Before beginning to play, Vishwa Mohan Bhatt – who was accompanied here by the tabla player Rajkumar Misra – gave a brief introduction to the principle and structure of Indian classical rag, an example of which would form a long opening section of the concert. In the rag, he explained, there is a formal, mathematical ascending and descending  structure around which the performers improvise, in patterns that vary the beats to the bar from slow to steadily increasing rapidity. So, although there is improvisation, at any point the musicians will know precisely where they are in terms of the point reached in the rag, and the stage in the rhythmic pattern which builds from six to sixteen beats.

After the opening rag, Vishwa Mohan Bhatt played a selection of his own compositions, before finishing by getting us all to sing with him the melody of the beautiful traditional Fijian song ‘Isa Lei’ from A Meeting by the River.

The concert had provided a rare opportunity to see and hear two masters of Indian classical music. It was, however, somewhat marred by the over-amplified sound. I wasn’t the only person to feel this: others around me were complaining about it, too. It may have been the fault of the Capstone sound crew, though I rather think that Bhatt fancies himself as a bit of a rock god.

Apart from his own solo albums, I would recommend his other collaborations with western artists, all superbly recorded, like A Meeting by the River, by Water Lily Acoustics: Bourbon & Rosewater (with Jerry Douglas), Saltanah (with Simon Shaheen), Tabula Rasa (with Béla Fleck & Jie-Bing Chen), and Mumtaz Mahal (with Taj Mahal).

A Meeting by the River:  from a documentary about VM Bhatt’s life and work

Vishwa Mohan Bhatt and Ry Cooder: Isa Lei, from A Meeting by the River