Toxteth’s cathedral beneath the water

Liverpool in 1847 was a grim place to be if you were poor, perhaps a recent immigrant fleeing the famine in Ireland. Being poor meant whole families living in single rooms in ramshackle tenements or in damp cellars, with no sanitation or fresh air. Drinking water – from a well with a pump if you were lucky – was often contaminated by raw sewage from a leaking cesspit. One historian, Gerry Kearns, has described Liverpool at this time as having been ‘created in haste by commerce – by men intent on immediate gain – reared without any tender regard for flesh and blood.’

But that year Liverpool Corporation did something remarkable, appointing the first Medical Officer of Health in the country, Dr. William Henry Duncan, who for the next fifteen years oversaw a programme of works that would see clean water supplied to the poorest areas of Liverpool for the first time, the installation of sewers, and a significant reduction in the number of families living in cellars and other unhealthy dwellings.

Alongside Dr. Duncan the Corporation appointed the first Borough Engineer, James Newland, who, together with the city’s first water engineer Thomas Duncan (another Duncan, but no relation) gave practical effect to Dr. Duncan’s vision by constructing a series of city reservoirs fed by gravity from a major new reservoir at Rivington Pike, twenty miles away in the Lancashire fells.

The Heritage Open Days this month gave me the opportunity of taking a look inside one of the city reservoirs designed by Thomas Duncan to hold water from the Rivington reservoir. The Toxteth Reservoir is still there at the top of High Park Street, a Grade II listed building completed in 1850. Inside the massive external walls of sandstone you enter a massive space, floored in brick with high vaulted brick ceilings supported on cast iron columns. This Victorian cathedral of brick columns and arches was submerged under water until it was finally decommissioned in 1997.

In the 1840s Liverpool had one of the highest mortality rates in Britain, with life expectancy at birth just 19 years. High rates of poverty and an economic
culture of casual labour on the docks resulted in one third of the population of Liverpool living in the cellars of back to back houses with earth floors, no ventilation or sanitation and as many as sixteen people in one room. And no clean running water.

When the Corporation appointed Doctor Duncan as Medical Officer of Health in 1847, they chose a man who was already fully acquainted with the public health problems of  the town. Born in Seel Street in 1805, Duncan had returned to Liverpool after graduating in medicine in Edinburgh in 1829. He  began practising medicine in Liverpool, and also served as a physician at the Central and North dispensaries.

In 1833 Duncan published an analysis of the cholera cases he had attended during the 1832 epidemic in Liverpool. He drew attention to the correlation between the disease and the living conditions of poor families in cellars and courts. He submitted his evidence to an inquiry by the corporation of Liverpool in 1833, and also to the House of Commons’ select committee on the ‘the state of large towns’ in 1840.

His paper ‘On the physical causes of the high rate of mortality in Liverpool’ (1843) was particularly influential, highlighting the terrible ‘sanitary state of the labouring classes’ in Liverpool, whose population was rapidly increasing, exacerbated by  migrants fleeing the famine in Ireland. He declared Liverpool to be ‘the most unhealthy town in England’.

As the nation’s first Medical of Officer of Health from 1847, Duncan initiated a series of reforms in public health which enabled the city to combat the return of cholera in 1854. When he died in 1863, the historian Sidney Chave comments, ‘Liverpool was a much better place for its people to live in as a result of his sixteen years of unremitting toil’. Today his name is celebrated in The Doctor Duncan pub in St. John’s Place.

Among the improvements which Duncan oversaw were the first public wash-houses and measures to facilitate the provision of a clean water supply to working class districts of Liverpool – including the establishment of the reservoir at the top of High Park Street.

For several years in the 1970s we lived in a flat with a back kitchen view up the length of High Park Street. I’d often pass the heavy sandstone walls of the reservoir – still functional in those days. But if I ever gave it any thought – if I was even aware that there was a reservoir behind those walls – I suppose I imagined a small lake, open to the sky, not a giant cistern covered by a vaulted roof supported by around 100 cast iron columns.

An area of 2600 square metres was filled with 12 feet of water – 2 million gallons held in place by the eight foot thick sandstone walls. Remarkably the water was fed by gravity from three reservoirs at Rivington, some twenty miles away in the Lancashire fells.

The reservoirs are still there, now managed by United Utilities, and one of them overlooked by a scaled replica of Liverpool’s 13th century castle (which once occupied the area where the Victoria monument on Derby Square now stands). It was commissioned in 1912 by Lord Leverhulme, the founder of Lever Brothers (now Unilever), and the driving behind the construction of the Port Sunlight model village for Lever Brothers workers on theWirral.

Our guide on the Heritage Open Day tour suggested an additional motivation for the construction of the High Park Street reservoir: the urgent need for a reliable system for putting out fires on the south docks. There had been a series of great conflagrations in 1840, and the authorities had sought parliamentary approval to draw water from aquifers in the red sandstone that lies beneath Liverpool for fire-fighting and street-cleaning as well as satisfying the need for a clean water supply.

In the summer of 1844 work began on sinking a well shaft into the sandstone at Green Lane and constructing a reservoir at Kensington. Under the direction of the other Duncan – Thomas –  the work was completed in 1846. By then the Corporation had obtained parliamentary approval to purchase the assets of the private water companies in the town, to construct the reservoirs at Rivington Pike, and to bring the water to Liverpool, a distance of twenty-four miles, by gravitation.

In April 1847, the Corporation appointed Thomas Duncan as the town’s water engineer. It was Duncan who designed the High Park Street reservoir (as well as Everton water tower on Margaret Street, ‘one of the most powerful monuments of Victorian Liverpool’ in the words of architectural historian Joseph Sharples). 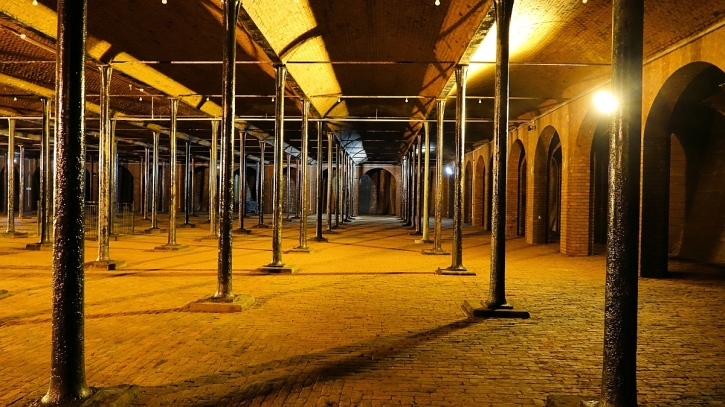 The vast, fort-like structure with a tower at one corner has a brick floor and high vaulted brick ceilings supported on cast iron columns. A series of brick columns and arches form a ‘cloister’ around the main space. The roof is covered in earth.

In the middle of the space is a giant plug hole, used when the reservoir was drained for cleaning or repair. As our guide explained, the principle of the reservoir is the same as that of a domestic toilet cistern – just on a larger scale. In one corner is a float valve that did the same job as the ballcock in a toilet, while the external tower is there to house the mechanism which would rise and fall with the level of the water.

The water from Rivington entered the reservoir via an impressive carved granite water shute, and left via outlet valves in one corner.

Demand soon outstripped the Rivington supply, and in 1866 Thomas Duncan began to investigate alternative supplies from the Lake District, the Pennines and Wales. In 1879 it was decided to build a dam on the river Vyrnwy and bring water from Wales to Liverpool.

The High Park Street reservoir was decommissioned in 1997 by North West Water, and was then handed over to the Dingle 2000 Development Trust which outlined plans to develop the reservoir as a community asset, including an arts venue, an education centre, and a rooftop cafe with views of the Mersey. Four years ago ambitious plans for the redevelopment of the the reservoir and the rest of High Park street were announced, but I don’t know what prospects these plans have.

3 thoughts on “Toxteth’s cathedral beneath the water”