We walk together? Europe’s failure on refugees echoes the moral collapse of the 1930s

Europe is facing a wave of migration unmatched since the end of World War II – and no one has reported on this crisis in more depth or breadth than the Guardian’s migration correspondent, Patrick Kingsley. In today’s Guardian, Kingsley offers an impassioned overview of Europe’s collective response to the refugee crisis. This is how he begins:

In 1938, representatives from 32 western states gathered in the pretty resort town of Evian, southern France. Evian is now famous for its water, but back then, the delegates had something else on their minds. They were there to discuss whether to admit a growing number of Jewish refugees, fleeing persecution in Germany and Austria. After several days of negotiations, most countries, including Britain, decided to do nothing.

On Monday, I was reminded of the Evian conference when British MPs voted against welcoming just 600 child refugees a year over the next half-decade. The two moments are not exactly comparable. History doesn’t necessarily repeat itself. But it does echo, and it does remind us of the consequences of ethical failure. Looking back at their inaction at Evian, delegates could claim they were unaware of what was to come. In 2016, we no longer have that excuse.

Nevertheless, both in Britain and across Europe and America, we currently seem keen to forget the lessons of the past. In Britain, many of those MPs who voted against admitting a few thousand refugees are also campaigning to unravel a mechanism – the European Union – that was created, at least in part, to heal the divisions that tore apart the continent during the first and second world wars.

Across Europe, leaders recently ripped up the 1951 refugee convention – a landmark document partly inspired by the failures of people such as the Evian delegates – in order to justify deporting Syrians back to Turkey, a country where most can’t work legally, despite recent legislative changes; where some have allegedly been deported back to Syria; and still more have been shot at the border.

Emboldened by this, the Italian and German governments have since joined David Cameron in calling for refugees to be sent back to Libya, a war zone where – in a startling display of cognitive dissonance – some of the same governments are also mulling a military intervention. Where many migrants work in conditions tantamount to slavery. Where three separate governments are vying for control. And where Isis runs part of the coastline.

In Greece, Europe’s leaders have forced the bankrupt government to lock up all arriving asylum seekers – and then reneged on a promise to help care for them, or move them to better-resourced countries elsewhere on the continent. The result is a dire situation on the Greek islands, where the world’s richest continent has contrived to jail babies, and then deny them access to adequate amounts of milk formula.

In Denmark, asylum seekers are forced to hand over valuables to pay for their stay, and volunteers have been prosecuted as smugglers for giving them lifts. In America, where boatloads of refugees were turned away from US ports in the 30s, more than 30 governors have refused to accept Muslim refugees. Some called for an outright ban on anyone fleeing a war that is ironically the partial result of catastrophic mistakes in American foreign policy over the past two decades.

The Evian conference may have happened long ago, but we can still learn its lessons. It reminds us, just as Hugo Rifkind wrote in a moving essay about the Holocaust last year, that “we, as humans, balance on the very lip of the unspeakable; always far closer to toppling than we might wish to admit. All of us, everywhere, all the time.”

Meanwhile, in the 2016 Webby Awards honouring excellence on the internet, a Guardian documentary film, We Walk Together: a Syrian Family’s Journey to the Heart of Europe has won in the online film and video: news and politics individual episode category.

Finally, DiEM25, the Democracy in Europe MovementDiEM25, the Democracy in Europe Movement, will hold an assembly on May 5th in Vienna entitled Europe’s Duty to the Refugees, Europe’s Duty to Itself, an event that stems from DiEM25 Manifesto’s pledge to forge an ‘Open Europe that is alive to ideas, people and inspiration from all over the world, recognising fences and borders as signs of weakness spreading insecurity in the name of security.’ 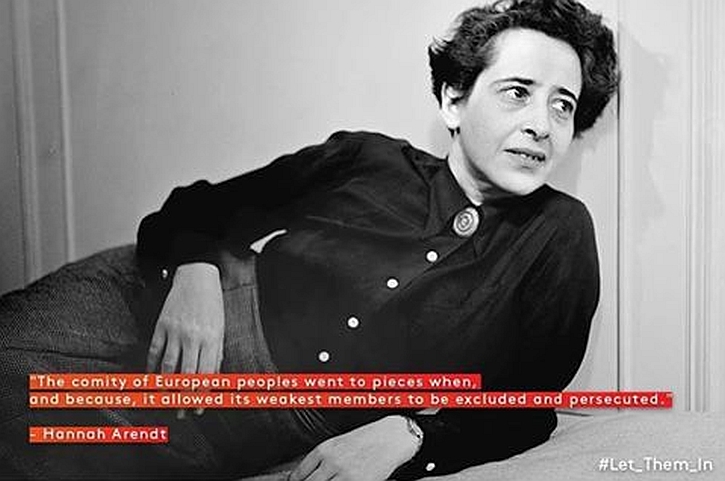 2 thoughts on “We walk together? Europe’s failure on refugees echoes the moral collapse of the 1930s”