Hieronymus Bosch back in his old home town

After dark in the old town of ‘s-Hertogenbosch, it’s easy to imagine that I am walking in the footsteps of Hieronymus Bosch. For even though he died 500 years ago, the street plan is unchanged from the lanes and alleyways with which he was familiar in the last decades of the 15th century. The painter lived here all his life, walking daily from his home on the Markt to his workshop nearby, and if he returned now, a wayfarer in time, he would still be able to find his way around.

And in a way he has returned. Banners fluttering over the city streets welcome Bosch back home to a year-long celebration the likes of which will almost certainly never be repeated. I’m here in this provincial Dutch town to see the remarkable exhibition which the director of the small museum has managed to assemble to mark the 500th anniversary of Bosch’s death. Improbably, he has convinced major museums around the world to lend nearly all of the 50 or so surviving paintings and drawings by the artist, at the same time attracting money from the Getty Foundation to pay for research and restoration work.

Very little is known about Bosch’s life or thoughts. Unlike his contemporary Albrecht Durer, who meticulously documented his life in letters and diaries, and a series of striking self-portraits, Bosch left behind few written traces and no definitive self portraits. Even his date of birth went unrecorded. All we know is that he was born around 1450 in ‘s-Hertogenbosch, at that time one of the three most important and prosperous market towns of the Low Countries alongside Antwerp and Brussels. His grandfather, father, brother and several uncles were all accomplished artists, part of a family whose given name was van Aken, signifying that they hailed originally from Aachen.

Sometime between 1475 and 1481 Hieronymus married the daughter of a wealthy burgher. As a result of the marriage and the success of his painting he became a very rich man, paying substantial taxes and becoming one of the inner core of the Brotherhood of Our Lady, a prestigious confraternity founded in 1318 in ‘s-Hertogenbosch as an elite social network which also promoted special works of Christian charity or piety. Members were called called ‘swan-brethren’ because each year one member would host a banquet at which a swan was traditionally served.

The town of ‘s-Hertogenbosch (which translates as ‘the duke’s woods’) had been established in 1185 on what were once private hunting grounds of a noble duke. In Bosch’s day it was noted for its organ builders, metal industry and cloth trade. In 1484 one of first printing presses in the Low Countries was established in the town. Bosch’s father built a large stone house on main square, and that was where Bosch lived for most of his life, crossing the market square every day to reach his studio one hundred yards away.

The house is still there (though much altered), and Bosch would still recognise the Markt square today. Painted by an unknown artist about 14 years after his death, this view of the Markt features the curious grey structures (seen at middle left) which are still there, while the market still takes place every Saturday.

One difference he would notice, though, would be the bronze statue of him that now stands in front of the house where he lived, now a souvenir shop called De Kleine Winst (‘The Small Profit’).

What did Bosch look like? There’s no way of knowing: unlike Durer, he left behind no self portraits. The artist who created the statue in the Markt probably drew his inspiration from this ‘Portrait of Hieronymus Bosch’, a drawing in charcoal and red chalk made around 1550 by Jacques Le Boucq. It’s from a collection of portraits of famous historical figures, none of whom Le Boucq could ever have seen.

The German art historian Hans Belting has speculated that the face of the ‘Tree Man’ in the right-hand Hell panel of The Garden of Earthly Delights is a self portrait. But that’s all it can be – speculation.

As for the kind of man that Bosch was – despite endless speculation about heretical beliefs, alchemical dabblings and licentiousness – we can state with absolute certainty that Bosch was a wealthy and utterly respectable Roman Catholic citizen of a small but prosperous town. The fact that Jeroen van Aken eventually changed his professional name to Jheronimus (or Hieronymus) Bosch, adopting the name of his home town suggests his reputation as an artist of repute had spread beyond the Low Countries. After the name change potential clients and patrons would know where to find him.

Hertogenbosch was – and remains – a Catholic town, situated on the border with the northern provinces that swung to Protestantism after Martin Luther nailed his 95 theses to the door of Wittenberg cathedral a year after Bosch’s death. Carnival is celebrated here with gusto, as I learned when I called into the Royal tea and coffee shop just off the Markt where I fell into conversation with the manager. Just beyond the town, to the north, a bridge marks the boundary between the Protestant provinces where the cultural norm, as he put it, is to work hard and live a quiet life, while in the Catholic south the preference is to live for the present and enjoy life. During Den Bosch carnival week, the manager explained, the world is turned upside down as the town’s citizens elect a carnival mayor, a lord of misrule.

Could the fantastical imagery in Bosch’s paintings reflect the experience of carnival? It’s quite possible – but what is certain is that Bosch was using imagery in his paintings that in his day everyone would be familiar with: images from fables, proverbs and jokes as well as Carnival, during which plays put on in public spaces would often feature scenes of Hell and actors wearing animal masks. As Stanley Meisler writes on The World of Bosch:

Bosch worked at a time when symbols constituted a basic visual language. Paintings displayed in public – mainly in churches were proclamations for all to ‘read.’

Nevertheless, Bosch’s visions were unique to him alone, and as the catalogue for the Hieronymous Bosch: Visions of Genius exhibition states on its opening page, Bosch ‘must have lived in two different worlds: the real one around him, and the universe of his imagination.’

Bosch’s images served to reinforce a deeply religious warning that Hell and eternal damnation would be the fate of those who engaged in the kind of behaviours he might have observed during Carnival. And what would the Bosch who railed against the deadly sin of gluttony have made of his home town’s renown today as a place that can throw a good party, and which has a culinary reputation and fine restaurants?

What would he have made of the favourite local indulgence: the Bossche bol. This is a sort of outsize profiterole – a spherical confection of pastry, chocolate and whipped cream. At the Royal, I indulged in one while waiting for the train to Amsterdam. As the manager emphasised – it’s not a profiterole. The covering is pure chocolate, not a sauce, and the whipped cream filling is light and made to a special recipe.

Before that – and before visiting the exhibition I had come to see – I strolled around Hertogenbosch.  The town is almost completely surrounded by defensive walls – a reflection of the many times when the town, on the frontline of the religious divide in the Low Countries, was besieged. To the south, the bastion overlooks the Bossche Broek, an area of marshland, now preserved as a nature reserve, that stretches into the distance as far as the eye can see.

Back on the market square, De Moriaan is the oldest brick house in the Netherlands, dating back to the beginning of the 13th century. Fifty years ago it was almost torn down as part of an urban renewal project. Miraculously, it survived and today the Gothic house with its round tower houses the tourist information centre.

During Bosch’s lifetime, the market town of ‘s-Hertogenbosch grew in prosperity, and he would have witnessed the construction of the new, larger, late-Gothic Saint John’s Church, built to replace an earlier Romanesque church. He would have seen the nave rise from ground level, though by the time he died, the nave roof was still not in place. The church – later designated a cathedral – was finally finished in the decade after his death. However, he did see the completion of an ornate side chapel financed by the Brotherhood of Our Lady, for which he painted two panels for the altarpiece (they are displayed in the current exhibition).

Saint John on Patmos is probably the first painting that Bosch signed in full and  now resides in Berlin’s Gemaldegalerie. It forms a pair with Saint John the Baptist, now in a Madrid museum, which depicts John in the wilderness. When he baptised Christ in the River Jordan, John declared, ‘Behold the Lamb of God who takes away the sin of the world!’ Bosch refers to this with the lamb at lower right to which John is pointing. It was only in the 1940s that it was noticed that the two paintings could have been designed as the wings of the altarpiece known to have been made for St. John’s Cathedral in ‘s-Hertogenbosch.

The explanation for the dispersal of the panels probably lies in the religious conflicts of the 17th century. In 1629 ’s-Hertogenbosch was recaptured by the rebel forces of the United Provinces, and as a result the cathedral became a site of Protestant worship and was stripped of all objects associated with Catholic liturgy, including the stained-glass windows. Drawings of the interior made in 1632 show the vaulted ceiling whitewashed and a curtain where the altarpiece once stood.

After visiting the Cathedral, I went to the Hieronymus Bosch Art Centre, housed
in a former church and dedicated to presenting the artist’s life, ideas, and works. Had I not already seen the exhibition at the Noordbrabants Museum, this would have been a much more engaging experience, since the centre displays actual-size reproductions of all Bosch’s paintings and drawings, most of which I had, however, just seen in their original form.

However, there was still much to enjoy. Everywhere you look – hanging from the ceiling or lurking in the corners – are large three-dimensional models of the monsters and strange creatures that inhabit his paintings.

In the basement there is a fanciful yet convincing recreation of Bosch’s studio, while a film about Bosch’s life is shown on the ground floor. But the highlight of any visit is the remarkable view of the city from the top of the church tower, reached by lift.

I took this photograph of the Markt with the statue of Bosch in front of the house where he once lived (the green building, De Kleine Winst) on 23 February. Imagine my surprise when I came across reports today that the adjoining building, used by an opticians, collapsed suddenly last night at around 11 pm. 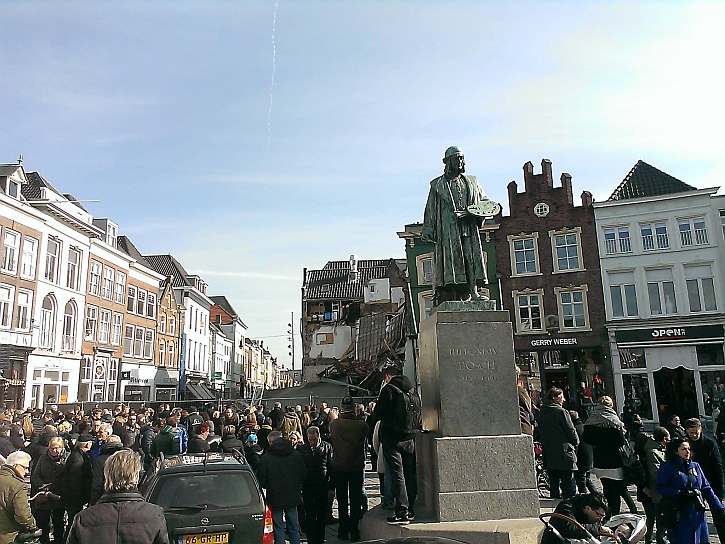 Apparently, builders had been busy throughout the day stripping the property for renovation. The house was built in 1637 and was a listed building. At the time of the collapse, workers were testing special outdoor lighting for the son et lumière show celebrating Hieronymus Bosch that will continue through this anniversary year. The lights were used to illuminate the rubble for rescue workers in the aftermath. Fortunately, no-one was hurt. 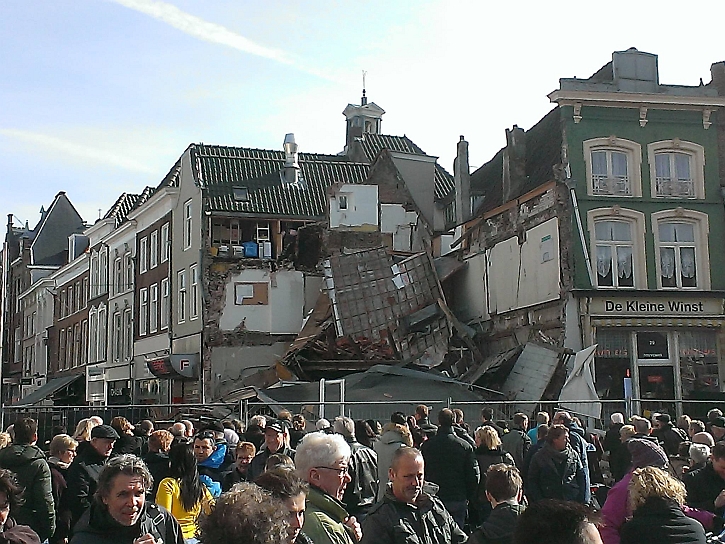 It seems a bizarre coincidence that the accident should happen in the year that the town celebrates Bosch’s 500th anniversary. Back then, Bosch and his fellow-citizens might well have suspected the devil’s work – or perhaps, God’s judgement on the sinful ways of the world.

5 thoughts on “Hieronymus Bosch back in his old home town”