Always keep Ithaca in your mind.
To arrive there is your final destination.
But do not rush the voyage in the least.
Better it last for many years;
and once you’re old, cast anchor on the isle,
rich with all you’ve gained along the way,
expecting not that Ithaca will give you wealth.
– from ‘Ithaca’ by CP Cavafy

On the beach at Skala we joined the queue waiting for the cruise to Ithaca. For Rita especially, this was the culmination of a lifetime’s imagining: Homer’s Ithaca not just an island but the ultimate, universal symbol of the longed-for destination.

It takes about an hour to reach Ithaca from the coast of Kefalonia at Skala. On the morning of our own crossing the sea was like glass, still and undisturbed by wave or breeze. It was this same calm sea which, a few hundred miles to the west that week, had led people smugglers to abandon to their fate record numbers of desperate migrants fleeing the crises of north Africa and the Middle East.

Appropriately for a journey to the island which Odysseus called home – in myth at least – our vessel was named Mythos. Leaving the beach at Skala, Mythos first followed the Kefalonian coastline northwards as far as Poros where from the sea we got a dramatic view of the deep Poros gorge. Before 1953, Poros was a just small scattering of fishermen’s huts. But after the devastating earthquake that year destroyed the surrounding villages, a new town was built at the entrance to the gorge through which the only road to the north of the island makes its winding way. 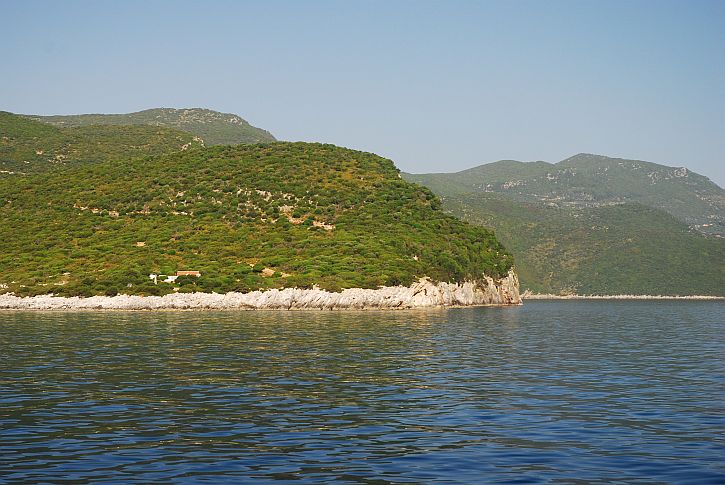 Beyond Poros, for another 45 minutes, we followed the Kefalonian coastline up past the port of Sami until we reached Agiou Andreou, the southern-most cape of Ithaca. We are heading for the first of two swimming stops at Gikadi beach, a stunning stretch of blinding white pebbles and blue crystal water, secluded and accessible only from the sea.

Approaching the beach, captain Vangelis Spathis simply allows Mythos to gently crunch up onto the shore, enabling those who wish to disembark for a swim or a stroll.

Beach stop over, we headed towards the island’s capital, Vathi (a somewhat misleading description for what is simply a tranquil and picturesque village). Before that we rounded a promontory on which the whitewashed church of Agios Ioannis (Saint John) stood in isolation.

Pray that the road be long;
that there be many a summer morning,
when with what delight, what joy,
you’ll enter into harbours yet unseen
– from ‘Ithaca’ by CP Cavafy

Soon we were approaching Vathi, sheltered deep within the bay which burrows deeply inland from the north-east, winding like the passages of the inner ear and almost dividing the island in two.

From 1500 the Ionian Islands, including Ithaca, were under the control of Venice.  Then, in the late 18th century, the island was occupied by the French, who built twin fortresses on both sides of the entrance to the harbour to protect the island from the British fleet. Their ruins could be seen as we passed through the narrow channel at the neck of the harbour. They proved to be less than effective: only two years after their construction the island was conquered by the British.

The population of Vathi numbers only a couple of thousand, its red-roofed houses lining the harbour on three sides like a horse-shoe. The earthquake of 1953 demolished Vathi completely, so virtually all the buildings are recent – but rebuilt in the original Venetian style.

Recently, in The Mighty Dead: Why Homer Really Matters (an excellent book which I will write more about soon), Adam Nicolson conjured this image of the Ithacan landscape:

Ithaca is not what the phrase ‘Greek island’ brings to mind. There is nothing of the drought-stripped bareness of the eastern Aegean, nor of the dry Asiatic pelt of the Trojan plain.  Ithaca is green and wooded, more Tuscan than Greek.  There are some wonderful harbours, but little good grass or arable land. It largely consists of mountains dropping to the sea. Wild pear trees blossom beside the spring meadows, but it is ‘rocky Ithaca’, the kind of island that has always thrived on trading or raiding but would be poor if reliant on its own resources.

These days, of course, it is tourism that provides the earnings, and tavernas and souvenir shops lined the quayside.  We chose to sit awhile at this one, where the owner and his dog made us welcome and we drank freshly-squeezed orange juices.

In Homer, Odysseus says, ‘My home is under the clear skies of Ithaca’, and they were certainly clear that day, as the sun beat down and the mercury pushed into the eighties.  People were saying it was the hottest May for 50 years (though back on Kefalonia one local had grumbled to me that it was still too cold for sea swimming, and wished that summer would start).

It wasn’t deliberate, but our journey to Ithaca coincided with the day that the results of the UK general election became known.  This lent our time on Ithaca a strange character: surrounded by sun and beauty, we would question people we saw tapping at tablets or overheard talking about the election for the latest developments. So, as the afternoon wore on, a picture emerged of an unexpected electoral earthquake back home: parties decimated and decapitated, leaders resigning, the political landscape transformed utterly.

Leaving Vathi we passed the islet of Lazaretto which was developed during the British occupation of Ithaca to serve as a hospital quarantine area, then later as a prison. The buildings were destroyed in the 1953 earthquake and a small chapel now stands there. From Vathi we cruised north along the coast to Kioni, another picturesque harbour village, even smaller and sleepier than the capital. The entrance to the bay at Kioni is dominated by three derelict windmills.

At Kioni, one of the few places on Kefalonia or Ithaca where buildings survived the earthquake in 1953, we stopped for lunch at one of the tavernas that line the small harbour. As the visitors consumed their lunches, a dozen or so village cats paid close attention.

Lunch over, we set sail again, retracing our route along the east coast of the island, pausing now and again to take a close look at interesting rock formations and caves.

To the east, shimmering in the afternoon heat haze, lay the outlines of several islands and the mountains of the Greek mainland. The nearest island, Vromonas, is uninhabited and up for sale – a snip at only €3,500,000 for a millionaire’s 70 acre private island with its own natural harbour. Island sales are a symptom of the ongoing Greek financial crisis. According to our captain, several islands have been bought recently by wealthy Russian oligarchs.

I am Odysseus, Laertes’ son, world-famed
For stratagems: my name has reached the heavens.
Bright Ithaca is my home: it has a mountain,
Leaf-quivering Neriton, far visible.
Around are many islands, close to each other,
Doulichion and Same and wooded Zacynthos.
Ithaca itself lies low, furthest to sea
Towards dusk; the rest, apart, face dawn and sun.
– Odyssey 9.19-26

We had just rounded Ithaca’s southern cape when the captain brought the vessel to a sudden halt: the crew had spotted a turtle making its way steadily towards the Kefalonian coast. In the late summer female loggerhead turtles crawl up to the back of beaches along the south coast of Kefalonia (including the beach at Skala), lay their eggs, and then cover them with sand. Seven to nine weeks later the embryos have developed into sea turtle hatchlings which hatch out of their eggs during the night and dig out through the sand until they reach the surface and immediately crawl towards the sea.

Many of these beaches have been untouched by human development until recently, and therefore offered turtles a secluded and safe place to nest. However, in recent decades tourist development has been encroaching on these nesting habitats.

In the Odyssey, Odysseus longs for his home on Ithaca, ‘the sweetest place any man can imagine’. But at the end of his perilous journey home what he finds there turns out to be far from sweet.  Like many before us, we had journeyed to Ithaca, but – as Cavafy says in his famous poem – what matters is not the destination but the journey itself. 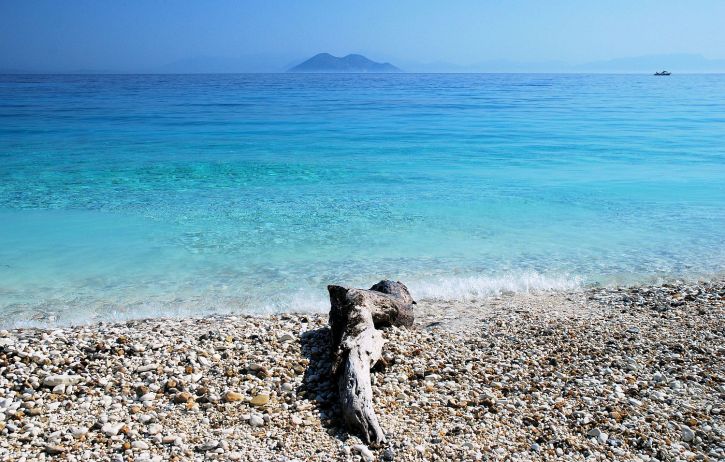 When you set out on the journey to Ithaca,
pray that the road be long,
full of adventures, full of knowledge.
The Laestrygonians and the Cyclopes,
the raging Poseidon do not fear:
you’ll never find the likes of these on your way,
if lofty be your thoughts, if rare emotion
touches your spirit and your body.
The Laestrygonians and the Cyclopes,
the fierce Poseidon you’ll not encounter,
unless you carry them along within your soul,
unless your soul raises them before you.

Pray that the road be long;
that there be many a summer morning,
when with what delight, what joy,
you’ll enter into harbours yet unseen;
that you may stop at Phoenician emporia
and acquire all the fine wares,
mother-of-pearl and coral, amber and ebony,
and sensuous perfumes of every kind,
as many sensuous perfumes as you can;
that you may visit many an Egyptian city,
to learn and learn again from lettered men.

Always keep Ithaca in your mind.
To arrive there is your final destination.
But do not rush the voyage in the least.
Better it last for many years;
and once you’re old, cast anchor on the isle,
rich with all you’ve gained along the way,
expecting not that Ithaca will give you wealth.

Ithaca gave you the wondrous voyage:
without her you’d never have set out.
But she has nothing to give you any more.

If then you find her poor, Ithaca will not have deceived you.
Wise as you will have become, so full of experience,
you’ll have understood by then what these Ithacas mean.

11 thoughts on “Voyage to Ithaca”