A piece in today’s Guardian by George Monbiot summed up my thoughts about the destructive nature of the economic system that we live under, with its blind commitment to constant growth, and also reminded me of a documentary film I saw recently.

Monbiot began his piece in a tone far from upbeat: ‘Another crash is coming. We all know it, now even David Cameron acknowledges it. The only questions are what the immediate catalyst will be, and when it begins’. He went on to relate the threatening symptoms of economic collapse to global capitalism’s addiction to constant growth:

If it goes down soon, as Cameron fears, in a world of empty coffers and hobbled public services it will precipitate an ideological crisis graver than the blow to Keynesianism in the 1970s. The problem that then arises – and which explains the longevity of the discredited ideology that caused the last crash – is that there is no alternative policy, accepted by mainstream political parties, with which to replace it. They will keep making the same mistakes, while expecting a different outcome.

To try to stabilise this system, governments behave like soldiers billeted in an ancient manor, burning the furniture, the paintings and the stairs to keep themselves warm for a night. They are breaking up the postwar settlement, our public health services and social safety nets, above all the living world, to produce ephemeral spurts of growth. Magnificent habitats, the benign and fragile climate in which we have prospered, species that have lived on earth for millions of years – all are being stacked on to the fire, their protection characterised as an impediment to growth. […]

Is it not time to think again? To stop sacrificing our working lives, our prospects, our surroundings to an insatiable God? To consider a different economic model, which does not demand endless pain while generating repeated crises? […]

Monbiot concludes by asking ‘the question that never gets asked: why?’

Why are we wrecking the natural world and public services to generate growth, when that growth is not delivering contentment, security or even, for most of us, greater prosperity? Why have we enthroned growth, regardless of its utility, above all other outcomes? Why, despite failures so great and so frequent, have we not changed the model? When the next crash comes, these questions will be inescapable.

Monbiot’s words recalled the striking documentary I watched a few weeks ago: Manufactured Landscapes by Edward Burtynsky, a photographer who is internationally acclaimed for his large-scale photographs of the ‘manufactured landscapes’ created by humans – quarries, recycling yards, factories, mines and dams. The film follows Burtynsky through China, as he films the evidence and the effects of massive economic growth. There are long, breathtaking sequences, such as the opening tracking shot through an almost endless factory. 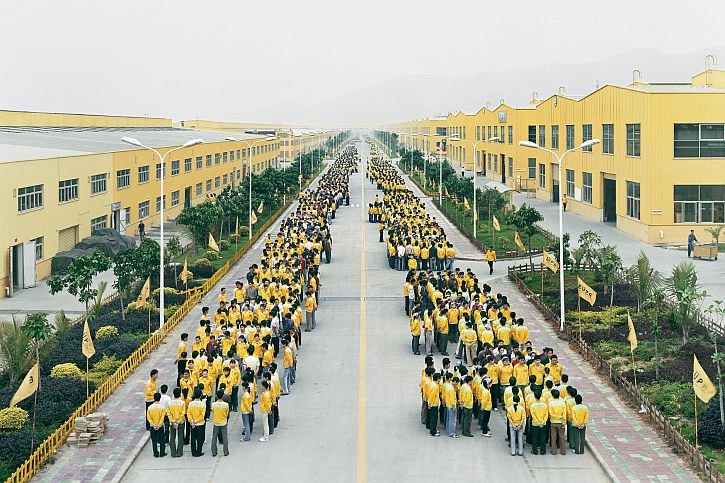 The film is an extended meditation on the human impact on the planet through the cycle that begins with the extraction of resources, continues with industrial production and ends with the dumping of waste. It’s a testament to the unsustainability of our economic system that Monbiot writes about today.

After the mesmerising tracking shot that opens the film, we hear Edward Burtynsky’s words as he explains his objective in making Manufactured Landscapes:

Is there some way I can actually talk about nature and bring a certain appreciation for what it represents?  That we come from nature, and that we have to understand what it is so as not to harm it and then to ultimately harm ourselves. That there is an importance to have a certain reverence for what nature is because we are connected to it and we are part of it. And if we destroy nature, we destroy ourselves.

So I believe that as a fundamental philosophical position when I look at the world.  I started thinking, maybe the new landscape of our time, the one to start to talk about is the landscape that we change. The one that we disrupt in pursuit of progress. I’m trying to look at the industrial landscape as a way of defining who we are and our relationship to the planet. 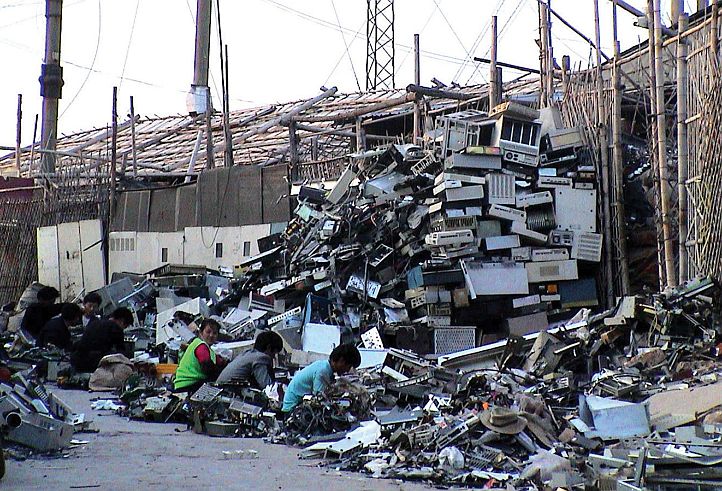 In a TED talk on YouTube, Burtynsky presents a slideshow of his photographs, which reveal vividly how industrial development is altering the Earth’s natural landscape: mountains of worn tyres, the hulks of rusting oil tankers waiting to be dismantled on a Bangladeshi beach, a river of bright orange waste from a nickel mine, women and children sifting through mountains of computer waste to pick out toxic but precious metals. Often the images are beautiful, but at the same time, as their significance dawns, they are horrifying.

Nature transformed through industry is a predominant theme in my work. I set course to intersect with a contemporary view of the great ages of man; from stone, to minerals, oil, transportation, silicon, and so on. To make these ideas visible I search for subjects that are rich in detail and scale yet open in their meaning. Recycling yards, mine tailings, quarries and refineries are all places that are outside of our normal experience, yet we partake of their output on a daily basis.

These images are meant as metaphors to the dilemma of our modern existence; they search for a dialogue between attraction and repulsion, seduction and fear. We are drawn by desire – a chance at good living, yet we are consciously or unconsciously aware that the world is suffering for our success. Our dependence on nature to provide the materials for our consumption and our concern for the health of our planet sets us into an uneasy contradiction. For me, these images function as reflecting pools of our times.

2 thoughts on “Growth: the destructive god”