Walking out to Llanddwyn island

This time we wanted to walk out to the island.  Last September, during a short visit to Anglesey, we chanced  upon the beach where the pines of Newborough Forest give way to dunes and some three miles of golden sand.  At the far end of Llanddwyn beach is the Island, Ynys Llanddwyn; from a distance it seemed a magical place, its rugged headland topped by two white towers and a tall Celtic cross.

The sandy trail to Llanddwyn Island

Although it is an island, you can walk out it when the tide is low.  With dog in tow we set out, only to be frustrated when we encountered notices that informed us the island is out of bounds to dogs.  So we had to go over one of us at a time, while the other sat in the shade of the pines with the dog.

I set off across the sand.  As you approach the island you pass several large rocks that protrude from the sand. Geologists are excited by these formations: they are pillow lavas, mounds of rock formed by undersea volcanic eruptions.  As the hot molten rock met the cold seawater a balloon-like skin was formed, which then filled with more lava, forming the characteristic pillow shape. These rocks extend down much of the length of Llanddwyn Island, giving it its distinctive outline and rolling topography.

Outcrops of pillow lava give form to Llanddwyn Island

Arriving at the island, I was met by the first of what turned out to be a series of elaborately carved gates, decorated with swirling Celtic motifs and elegant lettering.  The path beyond was just as lovely, constructed from pebbles and crushed seashells and edged with colourful masses of wild flowers.

Seashells and rocks form the footpath on Llanddwyn

In legend this really is a magical place. The name Llanddwyn means ‘the church of Saint Dwynwen’, the fifth century daughter of a Welsh prince of Brecon.  She fell in love with a young man named Maelon, but her father, the King of Powys, forbade their union and had him turned to ice. At this, Dwynwen retreated to the solitude of Llanddwyn Island to follow the life of a hermit, praying that all true lovers find happiness.

She has become the Welsh patron saint of lovers, making her the Welsh equivalent of Saint Valentine. Her feast day, 25 January, is often celebrated with cards and flowers, just as is 14 February is as Valentine’s Day. In Wales, lovers may exchange gifts of love spoons or love jewellery engraved  with poetry. Some may even come to Yns Llanddwyn.

The ruins of the 16th century chapel

As the legend of Saint Dwynwen grew, visitors would travel to the island to leave offerings at a small chapel that had become her shrine; indeed, so popular was this as a place of pilgrimage that Llanddwyn became the richest community in the area during Tudor times. A substantial chapel was built in the 16th century on the site of Dwynwen’s original chapel. The ruins of this can still be seen today. 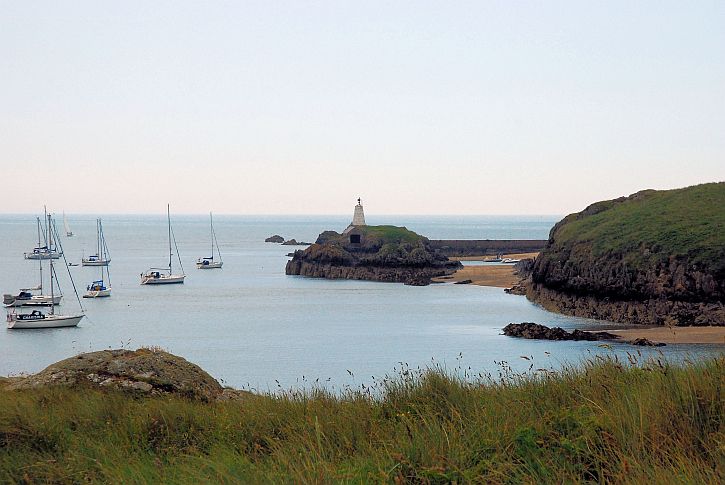 There are two white towers on the island.  The smaller one functioned as a navigational beacon until 1972, when it was turned into an automatic lighthouse. The larger tower at the end of the island, built in 1845, has a distinctive shape, since it was modelled on the windmills of Anglesey. Now closed, in 2004 it featured as a location in the romantic thriller Half Light. 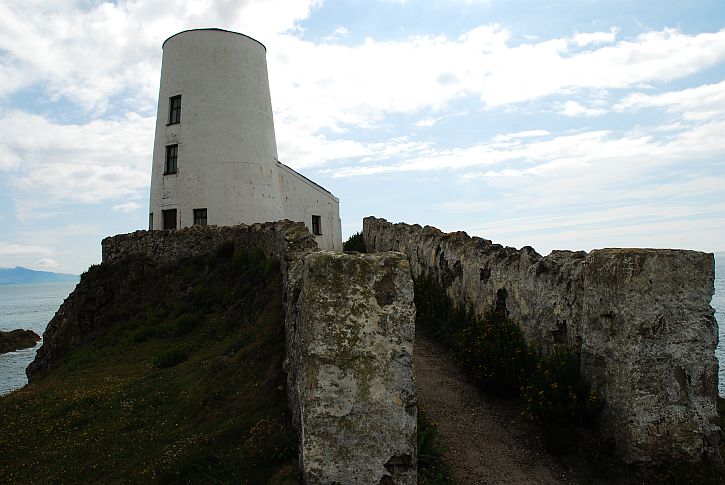 Llanddwyn lighthouse: modelled on the windmills of Anglesey

There are some cottages nearby which date from the early 1800s when they housed pilots who guided vessels into Caernarfon harbour. The pilots also acted as lighthouse keepers and lifeboat men; the cannon in front of the cottages was used to alert members of the lifeboat crew in times of emergency. 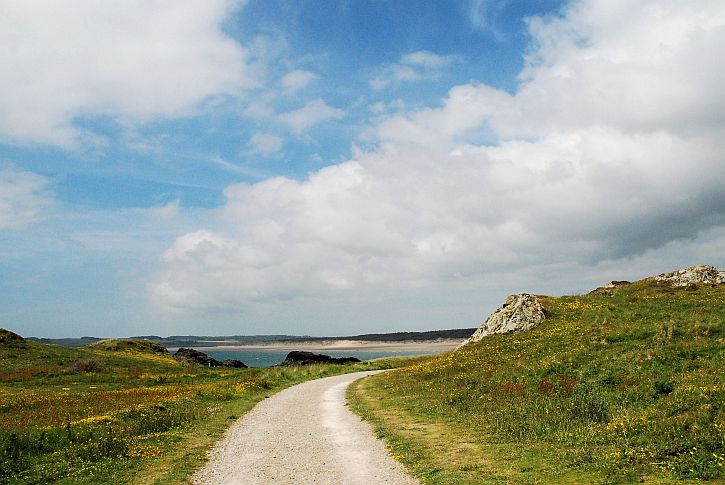 A place of outstanding natural beauty

This is a beautiful place. Wildflowers abound. There are multitudes of nesting seabirds (apparently, in the spring Ynys yr Adar, a small islet off the tip of Llanddwyn, hosts one percent of the total British breeding population of cormorants ). Not surprisingly, the wildlife artist Charles Tunnicliffe had a studio on the island for over 30 years.  There’s one painting of Tunnicliffe’s, Coming in to Land, which must have been done from sketches made at the mouth of Afon Cefni, looking toward the lighthouse of Ynys Llanddwyn and the Snowdonia mountains beyond.  It depicts one of my favourite sights, a skein of geese in flight.  You can hear the honking.

Charles Tunnicliffe, ‘Coming in to Land’

Then it was Rita’s turn to see the island, while I sat in the shade of the pines on a stiflingly hot day with a dozing dog.  Reunited, the three of us made our way back along the path through the forest, and along the edge of Newborough Warren’s dune slacks, back to the cottage for tea.

Returning for tea through the Corsica pines

On YouTube there is a video of scenes shot on Llanddwyn Island, with music by Llangwm Male Voice Choir:

One thought on “Walking out to Llanddwyn island”