Went for bread, met a head bound for Norway

At the end of my previous post I encountered a giant iron elephant.  A day later, picking up my Saturday sour-dough loaf from the incomparable Baltic Bakehouse, I found my way blocked by a giant bronze doll’s head.  Such is life.

For several months now I have not been able to eat bread from anywhere but the Baltic Bakehouse, a fairly recent addition to Liverpool’s independent retail scene, where they produce the finest sour-dough loaves.  They have names like Moss Lake Wild and Baltic Wild, though my favourite at the moment is their Granary.  They also make cakes and croissants to die for.  There’s an interesting article about them on the Seven Streets blog.

Last Saturday, turning into Bridgewater Street I found my way blocked by some pretty heavy lifting machinery.  Clearly something was going on, so I took a look.  A few doors down from the Bakehouse is Castle Fine Arts Foundry, another artisan outfit that, in the words of their website, has been ‘proudly serving sculptors for more than twenty years’.  They have cast a fair few pieces that we have seen displayed at Yorkshire Sculpture Park where I had been 24 hours earlier.  In Liverpool, the best-known work which came from Castle Fine Arts Foundry is the Hillsborough Memorial on Old Haymarket, created by sculptor Tom Murphy in bronze.

The Hillsborough Memorial on Old Haymarket.

This is what I saw: a giant sculpture being gingerly manoeuvred out of the foundry workshop.  It was a very delicate operation: I stood watching for about half an hour, and it took that long to get the whole piece out of the door.  Around two that afternoon I was another errand near Penny Lane when I met the head, strapped on a low-loader and heading out of town.  It had taken something like four hours to pull it out of the workshop and then lift it onto the low-loader. 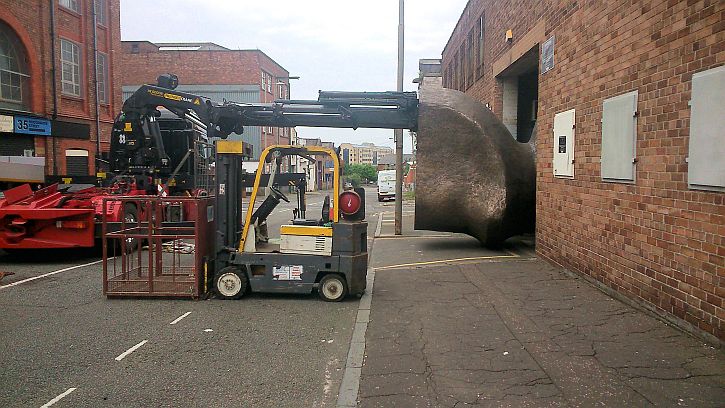 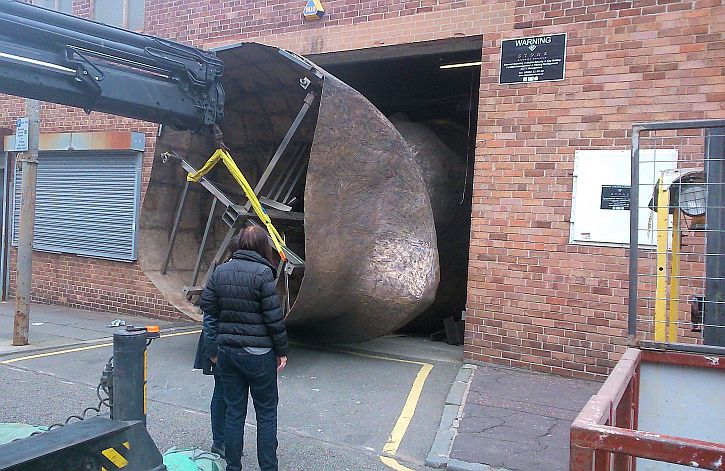 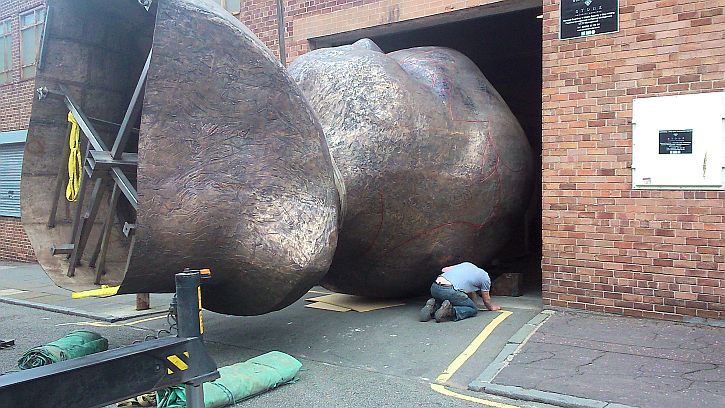 Chatting with members of the team who were supervising and filming the delicate operation, I learned that the head was on its way to a park in Oslo.  The huge doll’s head had been designed by Norwegian sculptor Marianne Heske to be place on a hillside in Torshovdalen Park in a suburb of Oslo.  She had chosen a position from where visitors to the park can sit and have a clear view of both the sculpture and Oslo fjord. Heske selected the spot two years ago, with the help of a giant balloon.

Heske, with the aid of a balloon, marks the spot for her doll’s head

The doll’s head has been major leitmotif of Heske’s work for decades – specifically, a 1920s doll’s head – girlish lips, arched eyebrows, tightly bobbed hair – that she found in Paris in the 1970s.  According to Frieze:

Its image recurs throughout her work from that decade, as Heske, in common with other artists practising in mainland Europe at the time, extended the conceptual trajectory started by Fluxus. This mass-produced head became, for her, a symbol of humanity, a representative of the anonymous individual among the masses. In various works and in different media – from photo-montage and lithography to assemblage and even film – she combined its image with scientific diagrams of skulls and phrenological charts and mappings, explorations of the systems used to classify consciousness, and to label individuals. 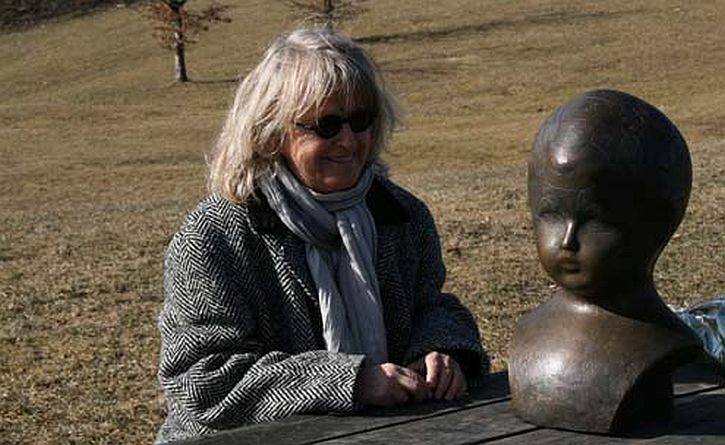 After graduating from Bergen Art College, Marianne Heske left Norway and lived first in Czechoslovakia, still behind the Iron Curtain, where she discovered Land Art, being made by Czech artists who didn’t have access to ordinary art materials because they didn’t conform to the dictates of Soviet official art policy. Then she went to live in Paris, which was where she found the box of doll heads in a flea market.  They were pouting papier mache heads with baby-doll faces, pencil-thin eyebrows, and rosebud lips. Heske liked them because ‘they all looked the same, all playing their role, and because dolls are a mirror of society. So I bought the whole box. I brought it home and started to work’. 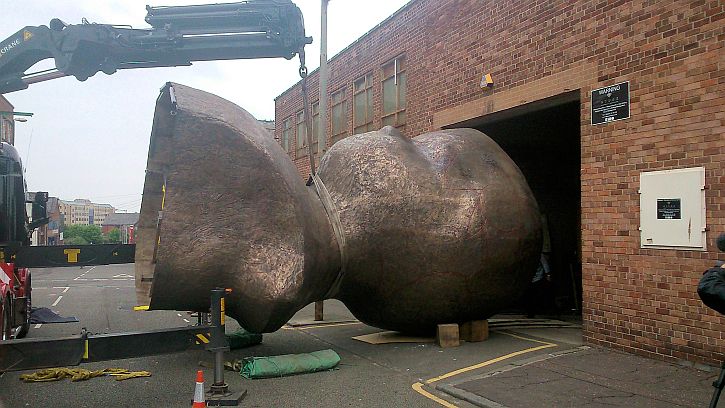 The Head finally clears the workshop

Head is an enlargement of one of those doll’s heads bought by Heske at the Paris flea market in 1971. It is 7 metres in height and is cast in bronze. The head is hollow, ‘so there’s room for big thoughts’, says Heske. 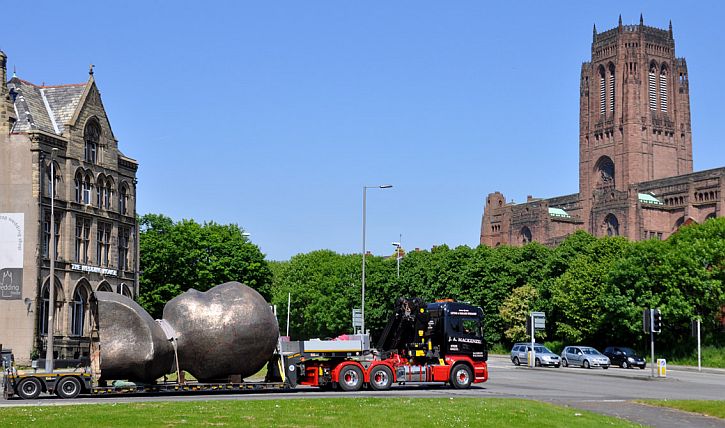 Hours later, the Head on the low-loader, passes the Anglican cathedral

The official unveiling will take place in Torshovdalen Park, Oslo on 12 June.

4 thoughts on “Went for bread, met a head bound for Norway”