A Hologram for the King: today we are not needed

Before Christmas I read Dave Egger’s latest novel A Hologram for the King, the story of Alan Clay, a middle-aged, American businessman who is at the end of his rope: divorced and deeply in debt, with a daughter he can’t afford to support through college.  With a fondness for alcohol, and a horrible growth on the back of his neck, he has flown to Saudi Arabia to make a presentation to King Abdullah in the hope of selling the Saudis hologram technology.

Day after day Clay is driven to a large white tent on the outskirts of the King Abdullah Economic City (or KAEC) that is rising out of the desert.  There, he and three young colleagues sit around with laptops waiting to show a holographic teleconferencing system to King Abdullah, on behalf of Reliant, an American company that is the largest I.T. supplier in the world. Day after day, the king fails to arrive and the Americans lie around, worrying about the absence of wi-fi and trying to kill time in the emptiness.

The American businessman’s story that lies at the heart of A Hologram for the King is more than an individual drama. Clay’s story is closely intertwined with recent American economic history, in a narrative that Eggers has forged into a dark comedy, a kind of Waiting for Godot thing. This reflects the way in which, in his own career, Eggers has combined activism with writing that has increasingly had the state of America as its central concern. 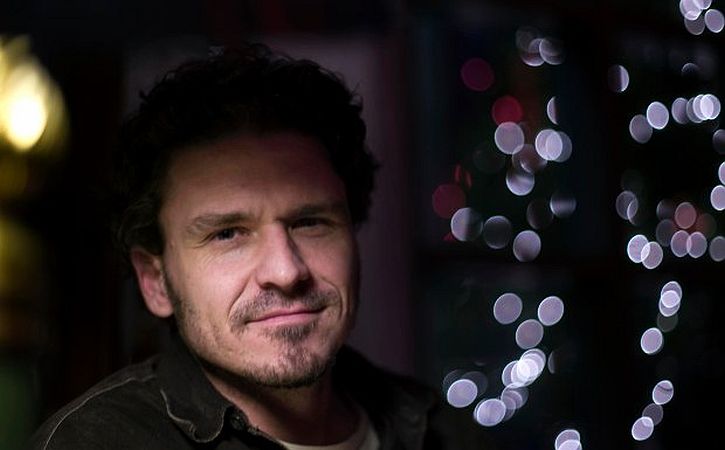 I’m a great admirer of Dave Eggers.  Though highly mannered and conscious of its own bravura stylings, I  enjoyed hugely the wit and humour of his first book, A Heartbreaking Work of Staggering Genius, in which he told the story of his parents’ deaths within weeks of each other, and of how he raised his kid brother while living out a Generation X lifestyle in San Francisco. I thought What Is the What, his non-fiction novel about Valentino Achak Deng, a Sudanese ‘Lost Boy’ who survives civil war and refugee camps only to meet with pain and heartbreak in America, was superb, while Zeitoun, was a brilliant account of an American heart of darkness in the aftermath story of Hurricane Katrina.

I admire Eggers, too, for the work his philanthropy and activism.  He co-founded the 826 Valencia project, a writing workshop for teens in a rundown district of San Francisco that evolved into 826 National, with writing workshops springing up around the country, and the non-profit organization ScholarMatch that connects donors with disadvantaged students who can’t afford to go to college (so it’s perhaps not surprising that Alan Clay, the protagonist in A Hologram for the King is anguished at the thought of not being able to support his daughter through college).

The new novel is a parable of America’s slow slide towards obsolescence in a globalized economy. Clay started out selling bicycles  for Schwinn bikes, the Chicago manufacturer – bikes made by American workers until the company abandons its factory in Chicago. Clay ponders the repercussions:

We’d tossed out a hundred years of expertise. You want your unit cost down, you manufacture in Asia, but pretty soon the suppliers don’t need you, do they? Teach a man to fish. Now the Chinese know how to fish, and ninety-nine percent of all bicycles are being made there, in one province.

Now Clay is facing an existential crisis. He’s divorced, he drinks too much, and the recession has worn down his earnings to practically nothing. He’s ‘virtually broke, nearly unemployed’, and needs to pull of this assignment in Saudi Arabia so that he can pay his daughter’s college fees. Reliant, a huge multinational, has sent him to Jeddah to pitch for the IT infrastructure contract for King Abdullah Economic City, a massive new development in the desert. Alan and his team aim to impress the king by showing him a cutting-edge holographic teleconferencing system, magically enabling a colleague in London to appear in 3D in their tent in Saudi Arabia.

Eggers makes everything about Alan’s crisis noticeably symbolic. During long hours of boredom as he waits for the king’s appearance, Alan muses that at Schwinn, he had been one of the executives who pushed for the bicycles to be manufactured outside America, in order to outflank the unions.  So the process was outsourced to Asia. The firm went bankrupt was Alan ‘left with nothing to sell’:

He’s had a career as a salesman, selling things. Now he’s selling an illusion to a man who never appears.

Eggers writes here with great spareness and clarity, conjuring the hallucinatory, weightless sense of Clay’s team waiting to make a holographic projection in the empty landscape of a puritan kingdom where everyone seems to be boozing on the sly.  Egger writes from personal experience of time spent in Saudi Arabia and cleverly evokes the absurdities of the scenario, at the same time affording glimpses of connections with the world beyond the kingdom’s borders.  In a half-finished apartment block in the desert he finds, just two floors below the gleaming finished apartments, a squalid bare concrete room where two dozen foreign labourers are crowded into a tiny space and fight over a discarded mobile phone.

A review in the New York Times described A Hologram for the King as ‘a clear, supremely readable parable of America in the global economy that is haunting, beautifully shaped and sad’, and continued:

Eggers speaks for a new America that has to think globally and can’t be sure where the country fits on the planetary screen. … Eggers, with ferocious energy and versatility, has been studying how the world is remaking America.

Before the start of the novel Eggers offers an epigraph from Waiting for Godot by Samuel Beckett:

It is not every day that we are needed.

Egger’s message for Americans (for us Europeans, too, no doubt) seems to be: get used to it.