After seeing the paintings of Ben Nicholson and Winifred Nicholson, Christopher Wood and Alfred Wallis in Art and Life at Leeds Art Gallery last week, we started to look around the permanent collection.  No sooner had we begun than the lighting began to flicker and everyone was asked to leave while an electrician was summoned to diagnose the problem.

So we strolled for an hour through the lovely Victorian arcades and Kirkgate market – all built when Leeds was at its most prosperous at the end of the 19th century. Then we headed back to the gallery to see if the problem had been sorted.  Thankfully, it had – for the gallery has a superb collection of early 20th century British paintings.  The excitement begins as you mount the staircase to the first floor galleries which house the permanent collection.  For here are masterpieces by Stanley Spencer, Jacob Kramer and Walter Sickert.

Here is Family Group: Hilda, Unity and Dolls, one of Stanley Spencer’s greatest pictures, painted in 1937. At first sight it appears to be a straightforward depiction of a woman, a child and some toys.  But this is a painting with a complex psychological undertow in which Spencer confronted the pain of separation from his first wife and his seven year old daughter.

The Hilda of the title was Spencer’s first wife and Unity was one of his two young daughters. The family had been living in the Berkshire village of Cookham when Spencer became obsessed with Patricia Preece who lived nearby and was, apparently, a painter.  In reality, Preece was a con artist. The paintings she exhibited under her own name were executed by her lover, Dorothy Hepworth. She had no real interest in Spencer except to get hold of his money – which she did very successfully. Spencer and Hilda divorced when the children were seven and eleven, and he married Preece. But they never lived together and Spencer was reduced to penury for the rest of his life. Spencer came to regret his disastrous decision, but too late to repair the damage done.

Hilda, Unity and Dolls was painted soon after it became clear that his second marriage was a fiasco. In the summer of 1937 Spencer returned to London, where Hilda, who was ill, was living with her mother. Spencer hoped to renew the relationship, but Hilda refused. In the painting she turns away, while the seven-year-old little girl stares intently at the artist with an unreadable expression.  The gallery caption offers this analysis of the painting’s disturbing psychology:

Spencer seems to push the viewer into close contact with the child’s gaze.  The adult looks wearily away, while the two eyeless dolls suggest a sinister unseeing presence.  It is the intense and poignant expression of a broken relationship. 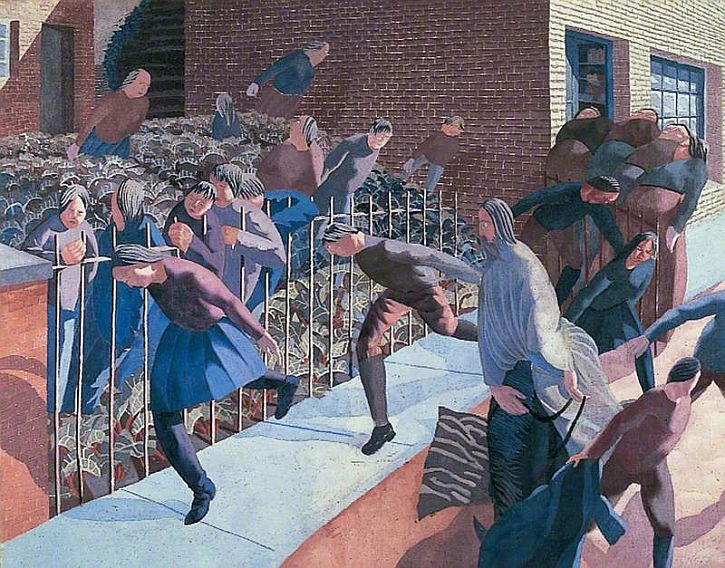 Nearby is another superb work by Spencer, Christ’s Entry into Jerusalem, painted in 1920. It was particularly interesting to see this work so soon after seeing Spencer’s Sandham murals at Somerset House, where they are on display temporarily. They were were inspired by Spencer’s experience in the First World War, serving as a medical orderly in Macedonia.  Whereas the murals were not completed until the early 1930s, Christ’s Entry into Jerusalem was one of the first paintings that Spencer completed after his return from the war.  It represents his own joyful feelings at returning to his beloved Cookham – for he has set the Biblical scene in Cookham’s High Street.

Christ’s Entry is one of a series of large scale religious paintings which Spencer began in 1920 – the same year in which he was invited to submit designs for murals for Leeds Town Hall.  The project never came to fruition, though Spencer did come to Leeds to discuss the plans.  When he arrived in the city he was shown around the town and its slums by Jacob Kramer, a Leeds artist who, like Spencer, had studied the Slade School of Art.  Kramer’s masterwork, The Day of Atonement is displayed at the top of the staircase, alongside the Spencers. 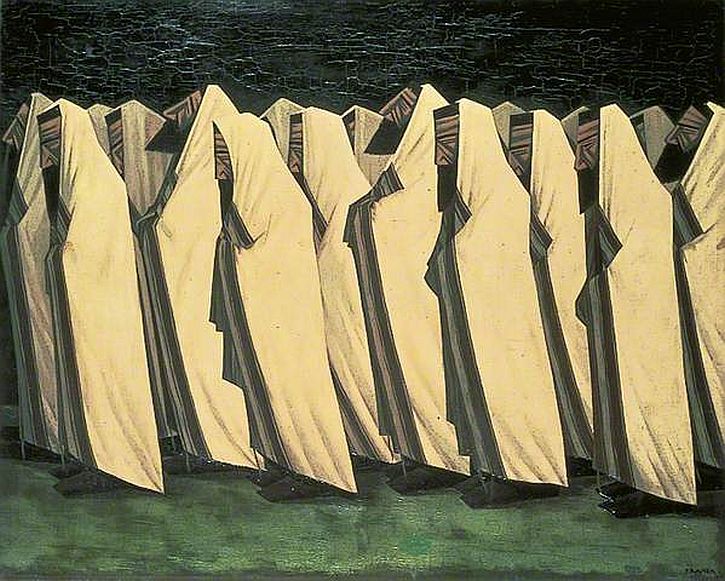 Jacob Kramer, The Day of Atonement, 1919

Kramer had been born in Russia, arriving in Leeds in 1900 with his parents after they had fled Tsar Nicholas II virulent anti-Semitic policies that forced Russian Jews either to assimilate or leave the country.  Desperately poor, Kramer obtained support from a Leeds-based Jewish foundation that enabled him to study at the Slade.  There he came into contact with the Vorticist movement led by William Roberts and Wyndham Lewis.

Spencer later congratulated Kramer on The Day of Atonement, one of the first modernist paintings to enter the Leeds collection.  Both artists shared an interest in finding modern expression for deeply-held religious beliefs.  Kramer once wrote:

The degree of expression in a work of art is a measure of its greatness.  A spiritual discernment is more essential than the reproduction of the obvious.

The painting depicts a group of Jewish men gathered for prayer on the holiest day of the Jewish calendar, Yom Kippur. There is a Vorticist dynamic in its stark portrayal of a procession of figures in silent prayer, its rhythmic intensity conveying strong emotions. 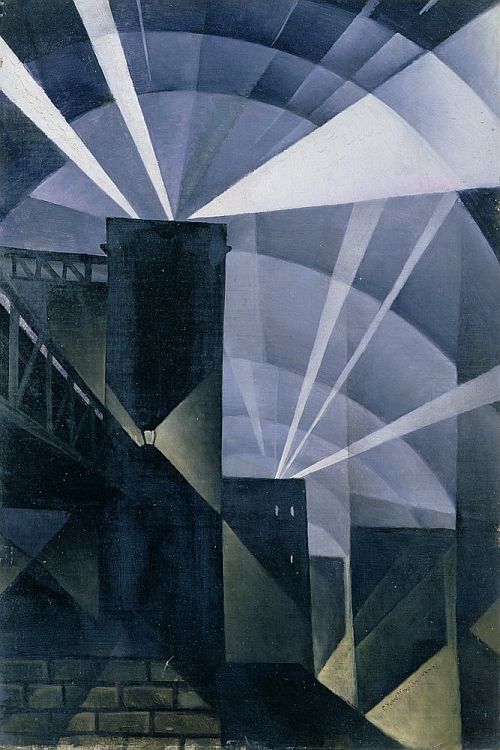 CW Nevinson was at the Slade at the same time as Kramer, where he came into contact with the individuals who would announce the instigation of the Vorticist movement in the manifesto Blast, published in July 1914 (it was Nevinson who came up with the title of the magazine).  Nevinson was already impressed with the ideas of the Italian Futurists (after all his mother, Margaret Nevinson had written that the Futurists were ‘young men in revolt at the worship of the past . . . determined to destroy it, and erect upon its ashes the Temple of the future. War seems to be the chief tenet in the gospel of futurism: war upon the classical in art, literature and music’.  Craig Raine, in the Guardian, described the movement as ‘a parochial British attempt to emulate and excel Cubism and Futurism. […] The impulse behind Vorticism, the theory, is simple. The machine is central to Vorticism. Everything was subsumed to the machine’.

The Futurists praised war and ‘beautiful ideas that kill’ as the only way of escaping a stultifying past. But the movement was swept away in the horrors of the First World War.  However, not before Nevinson had made Futurist paintings of machine-age London that celebrated the dynamism of underground Tube trains, traffic in the Strand, and – after war had been declared – the sight of searchlights over Charing Cross. The First Searchlights at Charing Cross is currently on display in Leeds Art Gallery.

The advent of World War I changed Nevinson’s mind. Having refused as a pacifist to become involved in combat duties, volunteering instead to work for the Red Cross, he was invalided home in January 1915.  On his return he announced that he would be using ‘Futurist technique’ to express the reality of war in his new work. In subsequent paintings Nevinson confirmed that he saw the Great War essentially as a tragic event. Nevinson understood that the very things that the Vorticists celebrated had become instruments of destruction. Bleak, outspoken and often angry, his paintings of 1915–16 are among the masterpieces of his career, bravely opposing the prevailing jingoistic tendency. He argued:

Our Futurist technique is the only possible medium to express the crudeness, violence and brutality of the emotions seen and felt on the present battlefields of Europe.

In The Daily Graphic he was quoted as insisting that all British artists should enlist:

I am firmly convinced that all artists should enlist and go to the front, no matter how little they owe England for her contempt of modern art, but to strengthen their art of physical and moral courage and a fearless desire of adventure, risk and daring.

Wyndham Lewis, one of the co-founders of Vorticism, subsequently tried to revive the Vorticist spirit, but the movement had met its end amidst the torn metal and broken bodies in the mud of Flanders and the Eastern Front.

William Roberts was a founding member of the Vorticist group who served in the war as a gunner.  After the war he developed an interest in picturing people at work and at play – as seen in The Dance Club (The Jazz Party), painted in 1923, which reflects the fascination of the Vorticists with dancing as a subject.  Some have recognised the figure on the right, standing and yawning, as Jacob Kramer. In 1915 Roberts met Sarah Kramer, Jacob’s sister, who he later married.