The call of the river

The day began, walking with the dog in the park, with a skein of geese flying overhead, a honking arrowhead of birds heading straight for the river. I don’t think there is any another sound that so lifts my spirits.  By mid-afternoon, the sunlight slanting brightly in the avenue, I heard the call of the river too.

As if pulled by the same primordial force that drew the geese, I headed out of the city, beyond Speke and the airport to Pickerings Pasture.  This is one of the best places to gain an appreciation of the breadth of the Mersey estuary, gouged and widened by glacial ice as it advanced south-eastwards and flooded as sea levels rose at the end of the ice age.  Here, at high tide, the river makes a broad S-bend sweep from the pinch point of the Runcorn gap south and west along the Cheshire shore towards the silver towers and chimneys of Stanlow oil refinery, glinting in the late afternoon sun.  Beyond lie the darkening outlines of the Clwydian hills.

The tide is running strongly toward the sea as, with the dog at my side, I set off to walk the short stretch along the river to the Runcorn bridge.  It’s a walk that embraces wild beauty and big-sky views, whilst snaking around the fringes of the Merseyside edgelands with its arterial roads, industrial estates, retail distribution centres and mysterious industrial processes.

The starting point, Pickering’s Pasture Nature Reserve, symbolises this dichotomy. Until the 1950s the  area was a salt marsh, grazed by cattle and home to wading birds and estuary plants. Then, for the next 30 years, the site was used as an industrial and household waste tip and a mountain of refuse rose on the salt marsh. But the land has now been reclaimed by Halton Borough Council, creating a haven for wildlife, covered by wild flowers, shrubs and trees and once again a place visited by resident and migrating birds. Surrounded by industry, it is a place of peace and quiet with magnificent views of the Mersey estuary.

We’re walking a section of the Trans-Pennine Trail here, encountering the occasional commuting cyclist who creeps up silently behind.  Along the track the autumn abundance of this ‘mast year’ is apparent; a year when, as the Guardian’s Plantwatch noted a few weeks back:

Trees are weighed down with an astonishing crop of nuts. … A mast year includes all the other nuts of woodland trees – acorns, sweet chestnuts, conkers, hazel, ash, maple, lime and many others. … Berries have also appeared in a bonanza season that should make for good foraging. There are heaps of big blackberries, elderberries, bilberries, sloes, rowan berries and others. 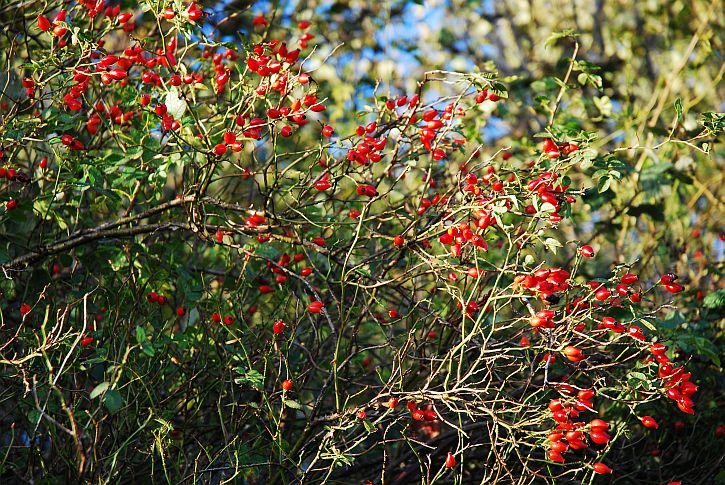 There were still a few blackberries, battered by the wind and rain of the past two weeks, along with elderberries and rowan, and lots and lots of rose hips. 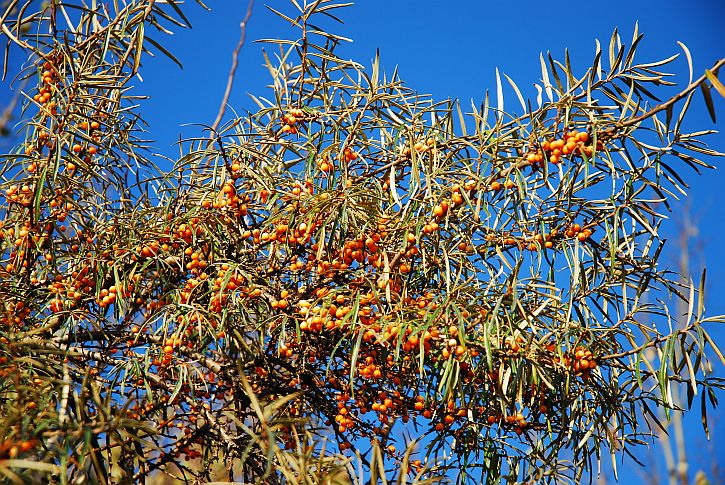 Along with all those easily-identifiable berries there was this unfamiliar (to me) large shrub with long thin leaves and bright yellow berries.  I later identified it (I hope correctly) as Sea Buckthorn that gets its name from being largely confined to sea coasts where salt spray off the sea prevents other larger plants from out-competing it.  The berries are an important winter food resource for birds, especially the fieldfare – a bird regularly sighted here by the volunteers of the Friends of Pickering’s Pasture.

The Pickering’s Pasture site was regenerated between 1982 and 1986 when Halton Borough Council reclaimed the land, safely covering the waste of the land fill site with a thick layer of clay.  A little way along the river bank is this obelisk, erected on the site of an old navigational beacon that was used by shipping on the Mersey right up to 1971.  The obelisk was constructed by men employed on the regeneration project.

One of the benefits of that scheme was the construction of the elegant white footbridge across Ditton Brook that rises somewhere around Netherley and flows through Ditton Marsh before joining the Mersey at this point.  Before its construction, the idea of walking from Hale to Runcorn along the river must have been out of the question if you weren’t carrying waders. 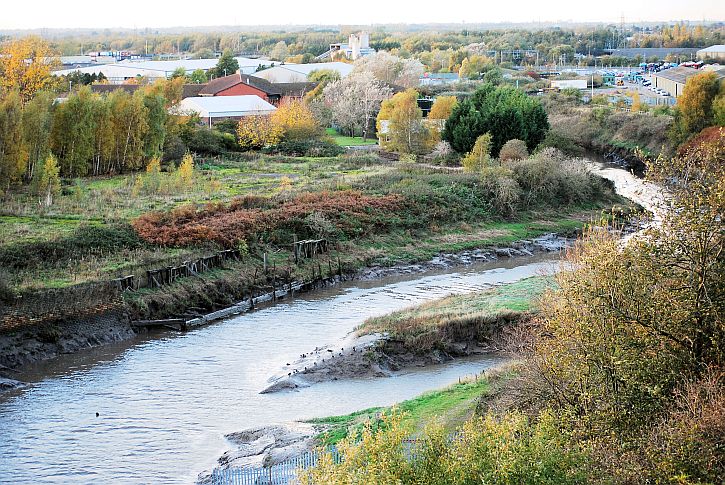 The brook, edged with tidal mud that attracts many wading birds, winds through the low-level industrial units of Halebank Industrial Estate.

But, at the eastern end of the footbridge a staircase of steps leads to a very different view: turn your gaze towards the river and, at high tide you’re presented with a view of the broad sweep of the Mersey with Cheshire’s sandstone ridge rising up behind Frodsham on the far bank and the hills of Wales on the skyline to the west.  The view is at its most impressive as sunset nears.

Walking on, the path is edged on the landward side by classic edgeland scenery: storage tanks, drainage ditches, railway arches and industrial units. We’re looking at the back end of the grandly-named Mersey Multimodal Gateway which, ‘if you’re into the movement and storage of goods’ – according to the group’s website – ‘is a unique piece of infrastructure with unrivalled features’.   At one point the path runs right alongside a food processing plant that is both noisy and smells richly of some ingredient that might be used in the brewing industry.

Since I last walked this stretch a huge Tesco distribution hangar has appeared, while nearby there is an Eddie Stobart cold storage yard where a ceaseless procession of articulated lorries were returning from making the day’s freight deliveries.

By now the bridge is dominating the view, although to be accurate there are two: the more westerly rail bridge and the distinctive Runcorn-Widnes road bridge that carries the A533 over the River Mersey and the Manchester Ship Canal, opened in 1961 as a replacement for the Widnes-Runcorn Transporter Bridge which I remember crossing the Mersey on as a child.

At the foot of the railway bridge are the remains of an old dock, the walls constructed from the distinctive red sandstone of this region.

Returning along the path, I could make out the Manchester Ship Canal on the opposite shore, with what looked like another Eddie Stobart distribution facility adjoining it.  Beyond loomed the sandstone crags above Frodsham.

As the sun began to set behind clouds to the west, a Ryanair flight made its descent towards John Lennon airport.

The western sky was bathed in a golden glow as the sun set beyond the Welsh hills.

Walking back I suddenly realised that I was not alone: above me, silent columns of seagulls leisurely made their way, following the river, headed for the sea.  There were hundreds in any one batch, thousands strung out ahead of me moving towards Liverpool, and more coming on silently behind.  I don’t know if this is a nightly movement towards roosting areas on the shore along the coastline of the Mersey Bay, or whether it was associated with the tide, running strongly towards the sea. Whatever it signified, it was a magnificent sight, making a perfect end to a day that begun for me with that honking skein of geese flying above me in Sefton Park. 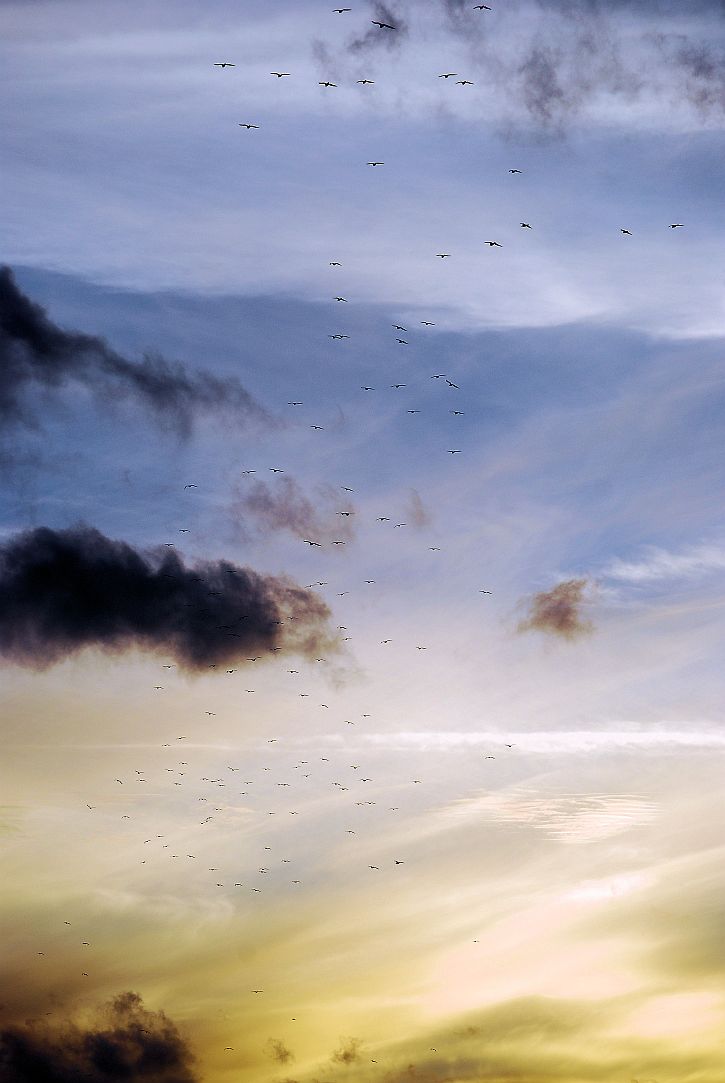 You do not have to be good.
You do not have to walk on your knees
for a hundred miles through the desert, repenting.
You only have to let the soft animal of your body
love what it loves.
Tell me about despair, yours, and I will tell you mine.
Meanwhile the world goes on.
Meanwhile the sun and the clear pebbles of the rain
are moving across the landscapes,
over the prairies and the deep trees,
the mountains and the rivers.
Meanwhile the wild geese, high in the clean blue air,
are heading home again.
Whoever you are, no matter how lonely,
the world offers itself to your imagination,
calls to you like the wild geese, harsh and exciting –
over and over announcing your place
in the family of things.
– Mary Oliver, ‘Wild Geese’ 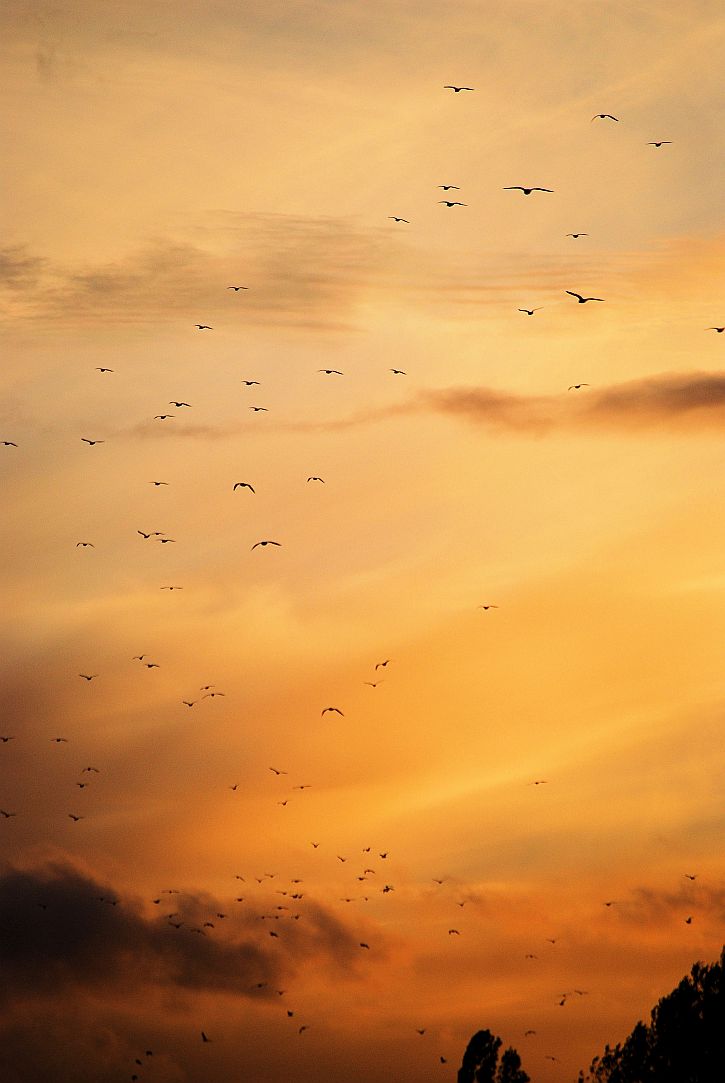 15 thoughts on “The call of the river”