It’s not a long or particularly difficult walk up from the delightfully-named hamlet of Thundergay up to Coire Fhionn Lochan, the lake like a teardrop that nestles in a bowl hollowed out by glacial ice in the mountains a thousand feet above.  But we did it on one of the last days of the long, cold spring of 2013; it may have been mid-June, but the wind battered us that day, making the going an effort, and the temperature did not speak of midsummer.

Nevertheless it was an exhilarating walk.  We parked the car opposite the access road to the tiny settlement of Thundergay where the main road round the isle of Arran hugs Kilbrannan Sound.  On the shore a pair of swans were fiercely protective of their brood of cygnets. 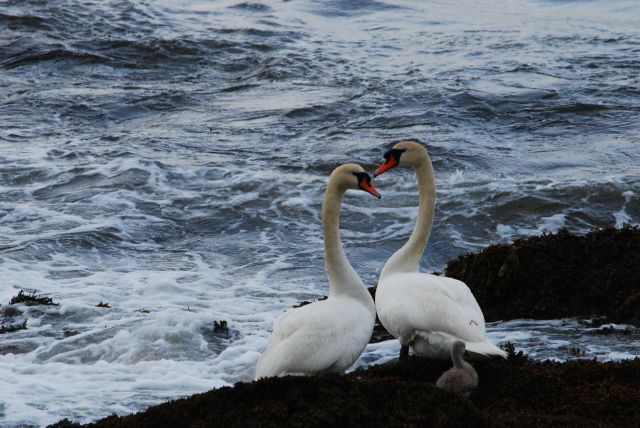 The path follows the lane towards the houses of Thundergay. A couple of volunteers were mowing the tall grass on the verges and clearing the drainage ditch.  The track begins to climb steadily past the few houses where buttercups and foxgloves grow in profusion and ferns and pennywort sprout from the stone walls. 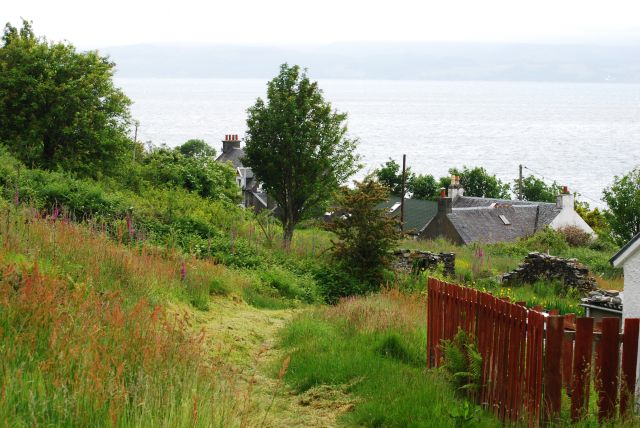 We headed through the gate and out on to the open fell, following a gently sloping path through the bracken before clambering over a deer fence to join Lenninmore Burn that tumbles down from the lochan above. 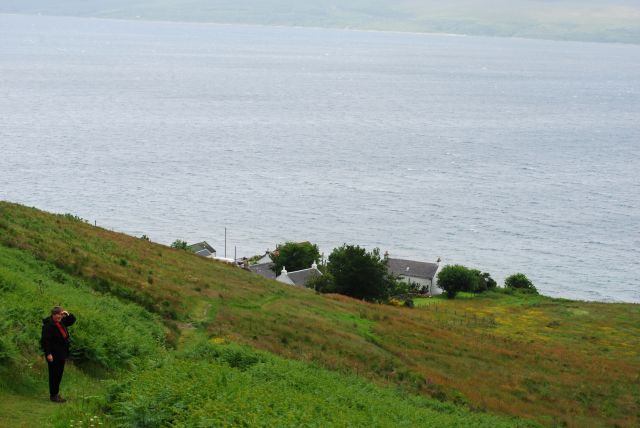 The well-maintained path follows a diagonal route across the hillside, through heather, bog asphodel and great sweeps of cotton grass, a familiar sight on windswept moors like this.  The higher we rose, the more fiercely the gale blew through the cottony seed heads of this ‘grass’ that is a sedge, rather than a grass.

We walked on, following the burn to a small gorge where the Lenninmore falls in two cascades of white water, one after the other, beneath birch trees.

Here the climb became steeper as the path crossed the burn via several large stepping stones before leading across a small ford and up a rock staircase that winds through the bracken and heather.  At the top of the staircase the route lead beside a series of granite slabs over which  the burn tumbled and cascaded.

one song of water
picking up
from another
the slopes
constantly
spilling water
as you climb
it pours
around you
rushing, dashing
leaping to find
its level
– Thomas A Clark
The going became easier and, bracing ourselves against the buffeting wind,  we took a moment to look back at the tremendous views over the Sound to Kintyre and the mountains of Jura beyond.  At our backs Meall Biorach and Meall Bhig, beneath whose slopes the lochan nestles, were shrouded by wind-blown cloud. 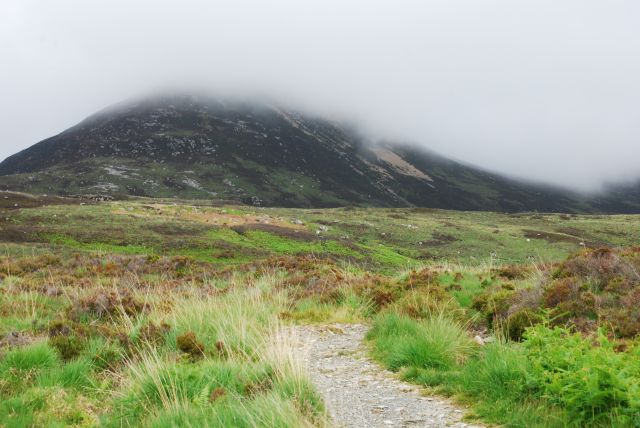 A plant needs to be tough to stand up to the battering winds here.  Apart from the hardy heather, bracken and cotton grass, it was noticeable that the other flowering plants seen here stay close the ground, rising only a centimetre or two in the shelter of a rock or a boulder. Hugging the ground were speedwell and gentian, fairy flax, and milkwort, cinquefoil, violet and lousewort.
to the north the land hardens
it meets and challenges the eye
sandstone, gneiss, quartzite
windswept and empty
a desert of wide skies
rock and water, a sparse cover
of purple moor grass, deer sedge
the light-loving dwarf juniper
rock cascades or stands
eroded by light
in a motionless pouring
insistent and remote
birch, pine and rowan
huddle in ravines
a stonechat drops
its note among stones
the distances are lonely
silence is immediate
immediately lonely
the rough bounds are desolate
you flinch away from it
yet each drop of rain
on your face or your arm
is a point of return
wind combs the heather
it puts an edge on stone
you splash through melt water
shaking the bog cotton
that you may not only
see but feel
the wind pushes against you
abrupt silences fill
[…]
mountain line and shoreline
carry the melody
butterwort and milkwort
invite you to delay
a lochan in a dark corrie
a sandpiper’s lonely piping
they give their distances
into your keeping– Thomas A Clarke, The Path to the Sea
Beyond another rise Coire Fhionn Lochan came into view, the deep, dark water fringed by a beach of white granulated granite.

This place is on a register of wild swimming locations, but – although a hiker we met on the way down said that he had encountered a woman swimming there one summer’s day – I couldn’t imagine entering that water as the wind howled and tore at our clothing this summer’s day. 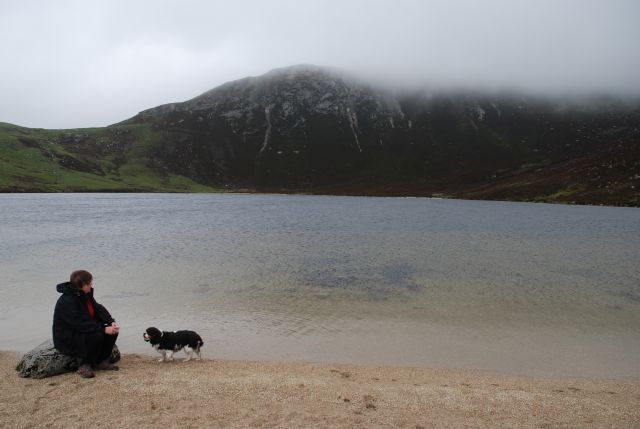 This is the view from the peak above the lochan photographed by a walker on 17 April, with snow still lying after the freak snow storm that hit this coast four weeks earlier.  His account of this walk can be read here, whilst a reminder of the snowstorm itself is on the BBC News website here.

We retraced our steps back to the Thundergay and the car.  Our Cavalier was not impressed by the choice of wading into the chilly water of the burn or making the leap across widely-spaced stepping stones. 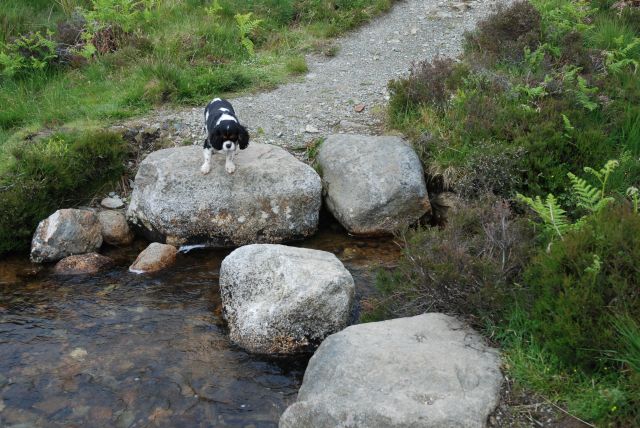 On the ferry coming over, a fellow-passenger had recommended that we seek out the recently-opened Cafe Thyme at the Old Byre Showroom just outside Machrie. So that was where we went for afternoon tea and delicious cake.  We were so impressed, we returned on our last night for a meal that was exceptional.  Just read the reviews on Trip Advisor!
Through the cafe windows there was a great view of the Auchencar standing stone in the field below, and across to Kintyre beyond. 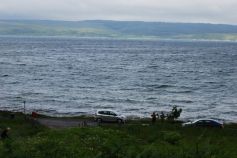 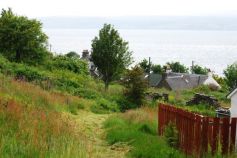 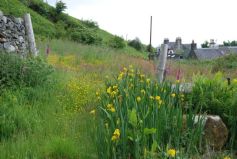 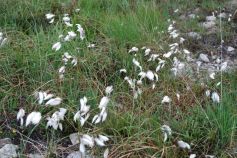 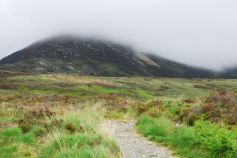 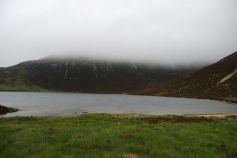