Getting Lost: leave the door open for the unknown

These days it’s pretty near impossible to get lost.  Turn to Google maps on your mobile phone and that blinking cursor shows you exactly where you are; on city streets we’re tracked by CCTV, and by satellite virtually anywhere on the planet.

But who wants to be lost? Well, Rebecca Solnit has written an exquisite gem of a book suggesting that being lost or losing oneself can pay unexpected dividends:

Leave the door open for the unknown, the door into the dark.  That’s where the most important things come from, where you yourself came from, and where you will go.

A Field Guide to Getting Lost is small enough to fit in your back pocket instead of your phone before setting out for the unknown. You could take solace from it if you did get lost – though her book is a meditation on getting lost in all senses of the word, not simply locational.  It’s a collection of nine short, ramulose essays in which Solnit leads the reader down many branching paths until, deliciously lost, unexpected vistas and possibilities are revealed.  In a small book Solnit covers an extraordinary extent of territory, weaving a web of intensely personal perceptions from history, ecology, politics, popular culture and art, wandering from subject to subject as she narrates dreams, old friends, desert walks, and personal memories.

At the outset of this voyage Solnit recalls a quotation that had been passed on to her a few years earlier.  The words are those of Meno, a figure in one of Socrates’ dialogues:

How will you go about finding that thing the nature of which is unknown to you?

The question strikes Solnit as being the basic tactical question in life:

The things we want are transformative, and we don’t know or only think we know what is on the other side of that transformation.  Love, wisdom, grace, inspiration – how do you go about finding these things that are in some ways about extending the boundaries of the self into unknown territory, about becoming someone else?

So her book evolves into an exploration of the many ways in which it is possible to set off into the unknown, become unutterably lost, but return from terra incognita bearing fresh knowledge, new insights, new maps.  A Field Guide to Getting Lost consists of nine short sections. Five of them begin as autobiographical reflections before Solnit veers off to make explorations into European and American history, popular culture, and the natural world. These are interspersed with four pieces all entitled ‘The Blue of Distance’ in which Solnit ranges among artists, writers, and explorers who each in their different ways lost themselves, mentally or physically, deliberately or accidentally, and discovered something new in the process.

Solnit surveys the notion of loss or of being lost in every sense: being physically lost, but also the loss of one’s history (her Jewish immigrant great-grandmother who literally disappeared), the loss of home and childhood, friends or companions lost because they have lost themselves, the earth’s lost species, some becoming extinct ‘right about when men first walked on the moon’.

Whatever it is that Rebecca Solnit muses on, she writes beautifully in passages that invoke the tradition of American transcendentalists such as Emerson and Thoreau, and modern counterparts such as Annie Dillard and Barry Lopez. At its heart is the same perception of the earth as a fragile place where species and wild places are being lost, though Solnit ranges far wider in her meandering thoughts.  In a review of the book for The Guardian, Josh Lacey wrote of her style:

Reading her prose is like spending time in the company of an earnest, determined hiker who disdains maps but nevertheless knows some unexpected and fascinating fact about every house, hill or tree that you pass. In a series of distinctive, peculiar, unclassifiable books, she has returned again and again to the same obsessions, approaching them from different angles, writing as an essayist, a memoirist, an activist, an ecologist, an academic, an artist.

These are the beautiful words with which Solnit opens the first of four essays that punctuate the book, each entitled ‘The Blue of Distance’:

The world is blue at its edges and in its depths. This blue is the light that got lost. Light at the blue end of the spectrum does not travel the whole distance from the sun to us. It disperses among the molecules of the air, it scatters in water. Water is colourless, shallow water appears to be the colour of whatever lies underneath it, but deep water is full of this scattered light, the purer the water the deeper the blue. The sky is blue for the same reason, but the blue at the horizon, the blue of land that seems to be dissolving into the sky, is a deeper, dreamier, melancholy blue, the blue at the farthest reaches of the places where you see for miles, the blue of distance. This light that does not touch us, does not travel the whole distance, the light that gets lost, gives us the beauty of the world, so much of which is in the colour blue.

In these pieces, Solnit muses on how European painters of the 15th century began to paint the blue of distance, on walking the Great Salt Lake, and on the Spanish conquistador Cabeza de Vaca, who in 1527 ‘entered the realm of the utter unknown’, pursuing glory and gold.  Utterly lost in a strange land, after a decade of  wandering and hardship during which his self was ‘pared back to nothing, no language, no clothes, no weapons, no power’, he finally encountered a party of fellow Spaniards, but could see them only as thieves who ‘bestowed nothing on anyone’. For Solnit, de Vaca’s story is that of someone who ‘ceased to be lost not by returning but by turning into something else’, the rare exception that proves the truth of Eduardo Galeano’s observation that, in Solnit’s words,

America was conquered, but not discovered, that the men who arrived with a religion to impose and dreams of gold never really knew where they were, and that this discovery is still taking place in our time.  This suggests that most European-Americans remained lost over the centuries, lost not in practical terms but in the more profound sense of apprehending where they truly were, of caring what the history of the place was and its nature.

Then there’s Yves Klein, an artist of grandiose ambitions and mystical tendencies who, influenced by Rosicrucian notions of pure realms of colour, painted canvases of an intense blue – his patented International Blue – the colour that represented for him the spirit, the sky, and water: the immaterial and the remote, distance and disembodiment.  In 1960, in The Leap Into the Void, he created a work of art that exists only in a photographic record, a gesture concerned with ‘erasing the map of reason and entering the void of pure consciousness’. 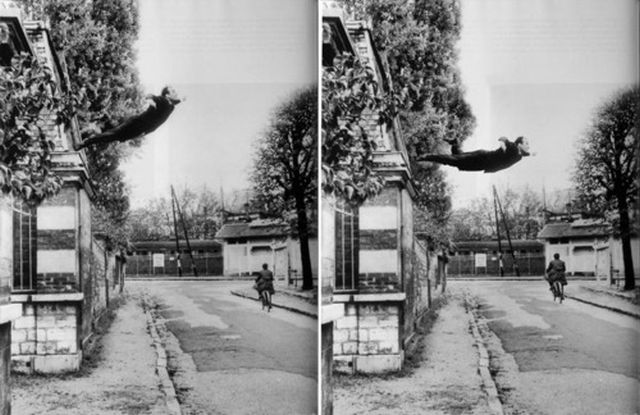 In this essay, Solnit connects Klein’s mystical explorations with fascinating observations on map-making, and the disappearance from modern maps of ‘Terra Incognita’, blank, unmapped terrain often imaginatively populated by cartographers with mythical beasts. (Like Solnit, I possess an atlas published at the beginning of the 1900s in which a few regions of the globe still appear white and uncharted.)

The autobiographical sections of the book are intense, intimate and written beautifully.  There is one that begins in an abandoned hospital, where paint peels from the walls and ceilings, flakes clinging to the walls ‘like papery bark and piled up like fallen leaves’.  The memory of this place leads Solnit into recollections of Marine, a friend who ‘plunged into the unknown again and again’, finally lost to the abandonment of drugs.  Another chapter begins, ‘Once I loved a man who was a lot like the desert, and before that I loved the desert’.  Arrowheads and rattlesnakes, a kangaroo mouse and cottontails populate the story of losing herself in a love that eventually shatters.  Yet:

I came out … transformed, stronger and surer than I had been, and carrying with me more knowledge of myself, of men, of love, of deserts and wildernesses.

I had read one previous book by Rebecca Solnit – Wanderlust: A History of Walking – which I wrote a bit about last month.  That book had a similar tendency to ramble off in all directions (not a failing in my book), but Lost transcends it.  I loved being lost in the labyrinth of its thoughts and memories; I have emerged enriched and knowing more.

8 thoughts on “Getting Lost: leave the door open for the unknown”