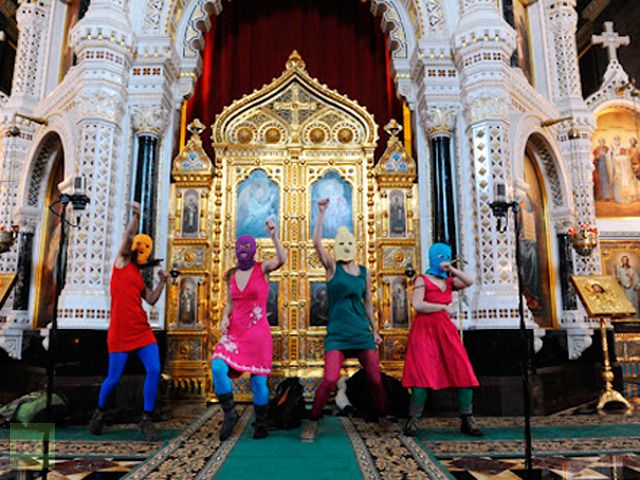 On The Guardian website today Carol Rumens has chosen as her poem of the week Punk Prayer by the Russian feminist punk band Pussy Riot, three of whose members have just been sentenced to two years in a prison colony for ‘hooliganism motivated by religious hatred’.  Rumens has worked up her own version of the lyric which the three women performed in Moscow’s Cathedral of Christ the Saviour five months ago.

Rumens accepts that the performance was mildly shocking, but, she says, ‘loud, rude, up-yours protest is what punk is all about’. She treats the lyrics seriously – ‘they have something significant to say, which the careless translations slopping around the internet tend to obscure’ – and reminds readers that ‘the absurdity and dishonesty of the judgment … recall Joseph Brodsky’s trial, and also the fate of Irina Ratushinskaya, viciously punished, in part, for poems expressing her Christian beliefs’.

How horrible to find that, post-perestroika, rampant capitalism and artistic repression are somehow able to cohabit. Pussy Riot have explained that their protest was not primarily against religion but against the Russian Orthodox Church’s support for Putin. The lyrics they wrote for Punk Prayer bear out the truth of this claim.

Here is Carol Rumens’ version of Punk Prayer – but do read her gloss on the words, too:

Bless our festering bastard-boss.
Let black cars parade the Cross.
The Missionary’s in class for cash.
Meet him there, and pay his stash.
Patriarch Gundy believes in Putin.
Better believe in God, you vermin!
Fight for rights, forget the rite –
Join our protest, Holy Virgin.

Irina Ratushinskaya was arrested on 17 September 1982 for anti-Soviet agitation. In April 1983, she was convicted of  ‘agitation carried on for the purpose of subverting or weakening the Soviet regime’, sentenced to seven years in a labour camp followed by five years of internal exile.  She was released on 9 October 1986, on the eve of the summit in Reykjavík, Iceland between Ronald Reagan and Mikhail Gorbachev.

While in prison, Irina continued to write poetry. While her previous works had invariably been concerned with themes of love, Christian theology and artistic creativity (not politics as her accusers insisted), the poems written in prison, were charged with questions of human rights, freedom, and the beauty of life.  They were written on soap until memorised and then washed away.

Give me a nickname, prison,
this first April
evening of sadness
shared with you.
This hour for your songs
of evil and goodness,
confessions of love,
salty jokes.
They’ve taken my friends,
ripped the cross from its chain,
torn clothes,
and then with boots
struck at my breastbone
torturing the remains
of hope.
My name is filed
in profile, full-face –
a numbered dossier.
In custody –
nothing is mine!
Just as you have
no one, nothing!
On the window’s grating
here’s all of me – christen me,
give me a name, prison,
send off to the transport
not a boy, but a zek,
so I’ll be welcomed
with endearments by Kolyma,
place of outcasts, executions
in this twentieth century.
– 5 October 1983

I will live and survive

In 1963, Joseph Brodsky’s poetry was denounced by a Leningrad newspaper as ‘pornographic and anti-Soviet’. He was interrogated, twice put in a mental institution and then arrested. Aged 23, Brodsky was charged with social parasitism by the Soviet authorities in a trial in 1964. His accusers called him ‘a pseudo-poet in velveteen trousers’ who had failed to fulfill his ‘constitutional duty to work honestly for the good of the motherland’.

At his the trial, this exchange took place btween Brodsky and the judge:

Brodsky was sentenced to five years hard labour and served 18 months on a farm in the Arctic Archangelsk region, three hundred and fifty miles from Leningrad. His sentence was commuted in 1965 after protests by prominent Soviet and foreign cultural figures, including Vladimir Yevtushenkov, Dmitri Shostakovich, and Jean-Paul Sartre as well as Anna Akhmatova.  Brodsky became a cause celebre in the West also when a secret transcription of trial minutes was smuggled out of the country, making him a symbol of artistic resistance in a totalitarian society, much like his mentor Akhmatova.

May 24, 1980 is a poem written on the occasion of Brodsky’s 40th birthday; this is his own translation:

I have braved, for want of wild beasts, steel cages,
carved my term and nickname on bunks and rafters,
lived by the sea, flashed aces in an oasis,
dined with the-devil-knows-whom, in tails, on truffles.
From the height of a glacier I beheld half a world, the earthly
width. Twice have drowned, thrice let knives rake my nitty-gritty.
Quit the country the bore and nursed me.
Those who forgot me would make a city.
I have waded the steppes that saw yelling Huns in saddles,
worn the clothes nowadays back in fashion in every quarter,
planted rye, tarred the roofs of pigsties and stables,
guzzled everything save dry water.
I’ve admitted the sentries’ third eye into my wet and foul
dreams. Munched the bread of exile; it’s stale and warty.
Granted my lungs all sounds except the howl;
switched to a whisper. Now I am forty.
What should I say about my life? That it’s long and abhors transparence.
Broken eggs make me grieve; the omelette, though, makes me vomit.
Yet until brown clay has been rammed down my larynx,
only gratitude will be gushing from it.

Brodsky’s link to Anna Akhmatova takes us back to the era of Stalinist repression. Akhmatova’s poetry was condemned and censored by Stalinist authorities for its personal and religious elements.  She chose to remain in Russia, acting as witness to the atrocities around her. Her perennial themes include meditations on time and memory, and the difficulties of living and writing in the shadow of Stalinism.  She was a close friend of fellow poet Osip Mandelstam, who was sentenced to imprisonment in one of the labour camps of the Gulag where he would die.

Akhmatova narrowly escaped arrest, though her son Lev was imprisoned on numerous occasions by the Stalinist regime, accused of counter-revolutionary activity. In her poem Requiem, written between 1935 and 1940, she describes waiting in line for hours outside a prison in Leningrad for news of her son. This is the opening of Requiem:

Not under foreign skies
Nor under foreign wings protected –
I shared all this with my own people
There, where misfortune had abandoned us.

INSTEAD OF A PREFACE

During the frightening years of the Yezhov terror, I
spent seventeen months waiting in prison queues in
Leningrad. One day, somehow, someone ‘picked me out’.
On that occasion there was a woman standing behind me,
her lips blue with cold, who, of course, had never in
her life heard my name. Jolted out of the torpor
characteristic of all of us, she said into my ear
(everyone whispered there) – ‘Could one ever describe
this?’ And I answered – ‘I can.’ It was then that
something like a smile slid across what had previously
been just a face.

Mountains fall before this grief,
A mighty river stops its flow,
But prison doors stay firmly bolted
Shutting off the convict burrows
And an anguish close to death.
Fresh winds softly blow for someone,
Gentle sunsets warm them through; we don’t know this,
We are everywhere the same, listening
To the scrape and turn of hateful keys
And the heavy tread of marching soldiers.
Waking early, as if for early mass,
Walking through the capital run wild, gone to seed,
We’d meet – the dead, lifeless; the sun,
Lower every day; the Neva, mistier:
But hope still sings forever in the distance.
The verdict. Immediately a flood of tears,
Followed by a total isolation,
As if a beating heart is painfully ripped out, or,
Thumped, she lies there brutally laid out,
But she still manages to walk, hesitantly, alone.
Where are you, my unwilling friends,
Captives of my two satanic years?
What miracle do you see in a Siberian blizzard?
What shimmering mirage around the circle of the moon?
I send each one of you my salutation, and farewell.

Pussy Riot may seem a long way from Akhmatova and Mandelstam, but as Carole Cadwallader wrote in yesterday’s Observer:

Don’t underestimate their bravery. The members of Pussy Riot whom I met, who put their balaclavas and colourful dresses in their bags when they go out to work or university, “like Batman”, were aware that bad things happen to people who dare to stand out in Putin’s Russia. Journalists die. Opposition politicians are beaten up. It’s no coincidence that Tolokonnikova, Alekhina, Samutsevich – Nadia, Masha and Katia – laughed and joked as they were sentenced on Friday. The trial was a joke.

They’re now going to pay the price. Russian women’s prisons are even harsher than the male ones. The women have been depicted on state television as evil satanists and their lawyers fear for their safety. It’s unlikely they’ll stay in Moscow; like Khodorkovsky, they’ll probably be shipped off to a far-off prison in Siberia away from family and friends, from their young children. It’s not a joke. It’s a brutal, nasty place, Putin’s Russia. And because of Pussy Riot, we all now know that now. 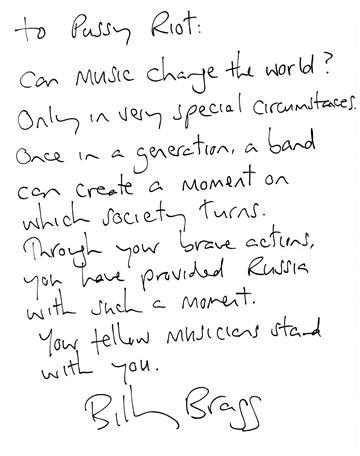