Return to Arran, where the world was stilled

Days full of rain
Skys comin’ down again
I get so tired
Of these same old blues
Same old song
Baby, it won’t be long
Before I’ll be tyin’ on
My flyin’ shoes

We left Liverpool a week last Saturday in a deluge, the start of a week of endless rain in England.  But we drove north, heading for Arran, and by the the Scottish Borders the sky was clear.  On the quay at Ardrossan, waiting for the ferry across to the island, the sun was beating down.

We would have a fine, dry week on Arran as we read of storms and flooding down south.  But our leaving was to be an entirely different matter: after a cold and largely wet day on Friday, we woke to a gale and steady rain on Saturday, and arrived at Brodick port to be told that our ferry had been cancelled.  A four hour wait in the queue of cars on the pier ensued.  It might have seemed ironic that, leafing through The Guardian as the rain lashed down, I came across Deborah Orr’s article, ‘The islands of Scotland are like heaven on earth – weather permitting‘ in which she writes:

Last week, as torrential rain lashed Britain, I relaxed with family and friends on a beautiful sun-kissed island, strolling across long, silver beaches, sitting in deck chairs admiring stunning scenery, and doing a couple of trips to other nearby islands, even more amazing than the one that we were on. Where was this paradise? Scotland. Mull, to be precise. It rained once, in the evening, and when morning came the skies were blue again. Sure, we were probably just lucky. The funny thing is, however, that every time I head for the Inner Hebrides in late May or early June, I have the same good fortune.

But this had been our experience, too, until the last day of our break – and you can’t ask more than that holidaying in Britain.

Following a brief but memorable visit to Arran last autumn, we vowed to return. Our base this time was on the island’s southwest coast – the last cottage on the shore at Kildonan, a stone’s throw from the beach with the distinctive, shadowy outline of Ailsa Craig rising sheer from the sea on the horizon.  The house was a former coastguard lookout – one has occupied this site since at least 1700.

Walking out towards Brennan Head after unpacking, it was as if the peace and tranquillity of the place seeped in through the skin’s pores.  Not that this is a somnolent place: it bustles with activity.  Martins swoop and dive, bringing mud to reinforce the nest under the eaves, while starlings surge noisily from bush to bush.

On the glassy water, swans glide, probing the shoreline for submerged roots and stems.  There are shelducks and quarrelsome oystercatchers, cormorants and gannets from the colony on the offshore island of Pladda, while ringed plovers do their funny sprint along the sand, captured finely in Norman MacCaig’s poem, ‘Ringed plover by a water’s edge’:

They sprint eight feet and –
stop. Like that. They
sprintayard (like that) and
stop.
They have no acceleration
and no brakes.
Top speed’s their only one.

They’re alive – put life
through a burning-glass, they’re
its focus – but they share
the world of delicate clockwork.

In spasmodic
Indian file
they parallel the parallel ripples.
When they stop,
they, suddenly,
are gravel. 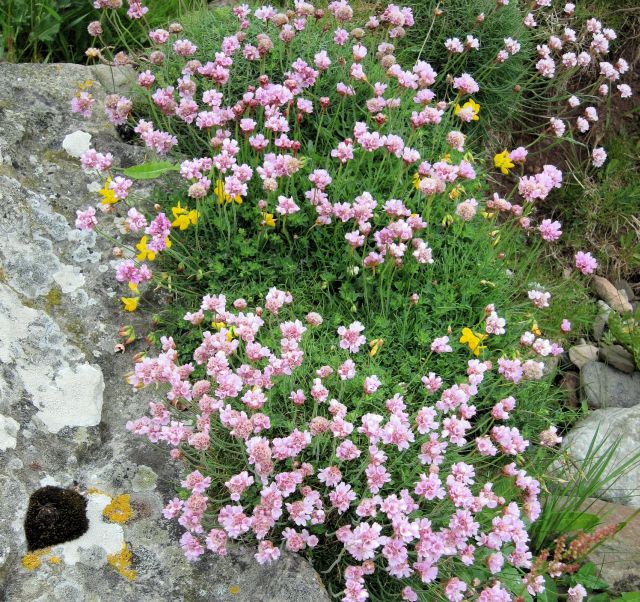 Here, too, is ragged robin, yellow flag and ladies smock, all seeking the damper patches, while bird’s foot trefoil colonised the turf trodden by the cows that graze the meadows along the shore.  At the last sandy beach before the boulder field of Brennan Head we sit awhile, watching the seals perched on the rocks a few yards offshore.  Edging closer to photograph of one, it takes exception and slides into the sea. 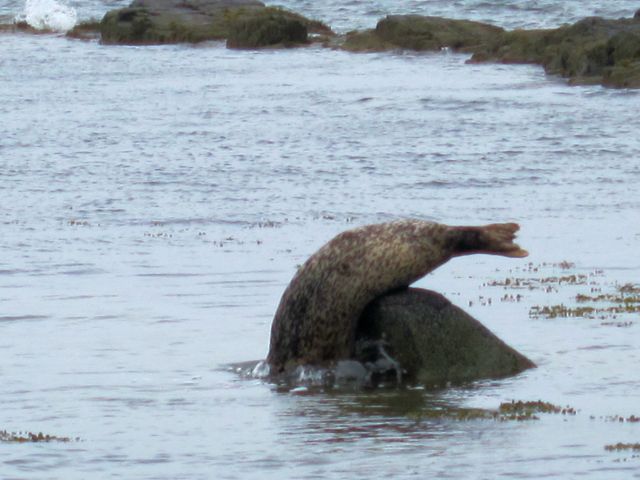 There’s something I want to forget,
though I forget what it is.

… My mind niggles and grits
like the sand under my feet.

I used to know things I didn’t know.
Not any more.  Now I don’t know
even the things I know, though I think I do.

… Little waves slide up the beach and slide back,
lisping all the way.  The moon
is their memory.  In my head
there’s no moon.

What I don’t know I don’t even think I know.
That was Socrates, conceited man.

I’m trying to remember
what I’ve remembered to forget.

Twenty yards away, a seal’s head
looks at me
steadfastly
then tucks itself
under the surface, leaving
no ripple.
– Norman MacCaig, ‘On a beach’

It was here, too, that R watched as an otter ambled down the beach and slid under the water. The Isle of Arran wildlife web page states: ‘While numbers declined across Britain as a result of persecution and pollution in the mid 20th Century, the Highlands and Islands – including Arran – retained a relatively healthy population and remain prime otter-watching territory. Spotting these shy creatures usually requires luck or patience’.

Arran is often described as ‘Scotland in miniature’ because the landscape of the island is so varied.  During our week here we walked seashore and mountain glen, through wooded valley and beneath boulder-strewn cliffs.  We saw standing stones from the bronze age, Viking burial mounds and iron age forts, and I walked the spine of an island off an island.  I’ll describe these peregrinations in forthcoming posts. 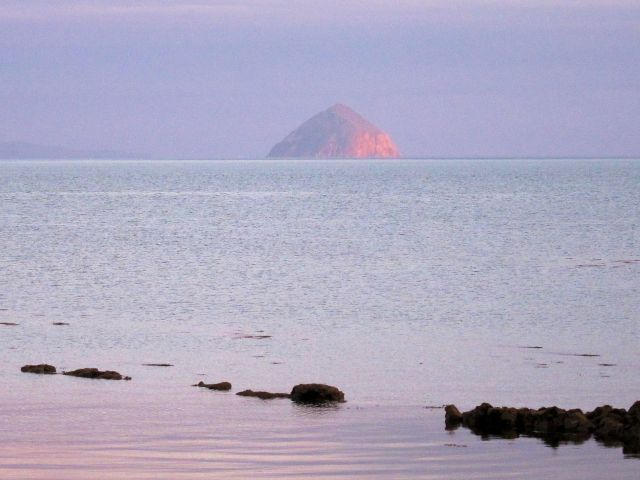 Little more than a week from the summer solstice, the extravagance of the northern summer light was apparent, even at latitude 55′ N.  At midnight, and again by four in the morning, the sky would be washed with light.  Standing at the cottage door at close on 11pm, when the photo above was taken, the western face of Ailsa Craig glowed pink in the setting sun.  Coincidentally, I was reading Peter Davidson’s The Idea of North, in which he explores the concept of ‘north’ as manifested in painting, legend and literature.  He writes of the northern summer, ‘as prodigal of light as the winter is starved of it’, celebrated, for example, in Bergman’s films, Smiles of a Summer Night and Wild Strawberries.

Much of the melancholy of the north arises from the impossibility of saving one minute from the long light against the approaching darkness. … For many, true north is defined by white nights, the ‘summer dim’, the extravagance of light all night through, celebrated in the haiku by Alan Spence:

Davidson cites other examples of the cultural  influence of the season of light, from the Gaelic calendar that places summer earlier than the later, Christian tradition with May and June being central, to Summernight, the painting by Norwegian Harald Sohlberg (above).

In the evening, here on Kildonan shore, with the sea like glass and the only sounds the gentle lapping of waves on rocks and pebbles, and the soft breathing of the cows in the meadow, it is as if Norman MacCaig wrote his poem ‘Sound of the Sea on a Still Evening’ about this place:

It comes through quietness, softly crumbling in
Till it becomes the quietness; and we know
The wind to be will reach us from Loch Roe.
From the receding South it will begin
To stir, to whisper; and by morning all
The sea will lounge North, sloping by Clachtoll

Gentlest of prophecies. The most tottering grass
Stands still as a stiff thorn, as though its root
Groped not in sand but in sand’s absolute
And was itself disqualified to pass
Into a shaking world where it must be
Not grass but grasses rippling like the sea.

Three heifers slouch by, trailing down the road
A hundred yards of milky breath – they rip
The grasses sideways. Waterdrops still drip
From the turned tap and tinily explode
On their flat stone. An unseen bird goes by,
Its little feathers hushing the whole sky.

And yet a word is spoken. When the light
Gives back its redness to the Point of Stoer
And sets off cocks like squibs, pebbles will roar
At their harsh labour, grinding shells to white
And glittering beaches, and tall waves will run
Fawning on rocks and barking in the sun. 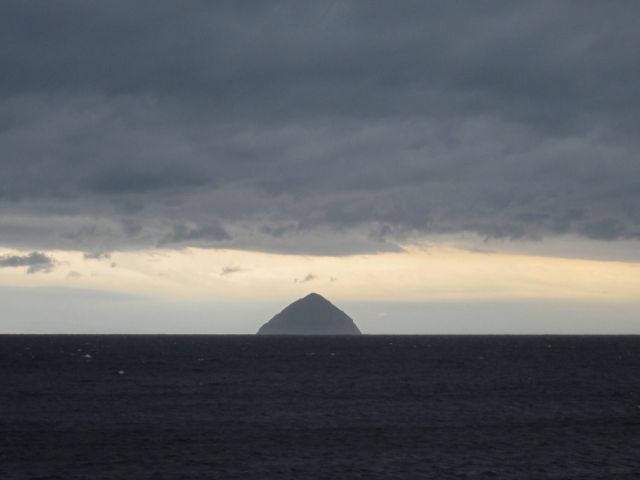 After six good days without rain the weather took a turn for the worse, with rain and lowering clouds over Ailsa Craig on Friday evening. As we left the following morning the island was being lashed by stiff winds and rain.  The sea, placid all week, at Whiting Bay was being whipped by the wind as breakers rolled onshore. Our ferry was cancelled, and we had to wait until the storm had abated before we could make the crossing to the mainland.

Nonetheless, we left with memories of a fine holiday:

Where  no-one  was was where my world was stilled
into hills that hung behind the lasting water,
a quiet quilt of heather where bees slept,
and a single slow bird in circles winding
round the axis of my head.

Any wind being only my breath, the weather
stopped, and a woollen cloud smothered the sun.
Rust and a mist hung over the clock of the day.
A mountain dreamed in the light of the dark
and  marsh mallows were yellow for ever.

Still as a fish in the secret loch alone
I was held in the water where my feet found ground
and the air where my head ended,
all thought a prisoner of the still sense –
till a butterfly drunkenly began the world. 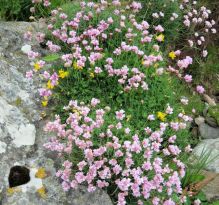 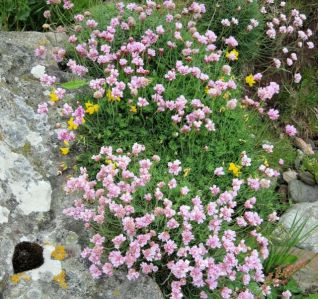 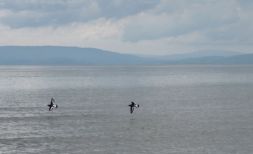 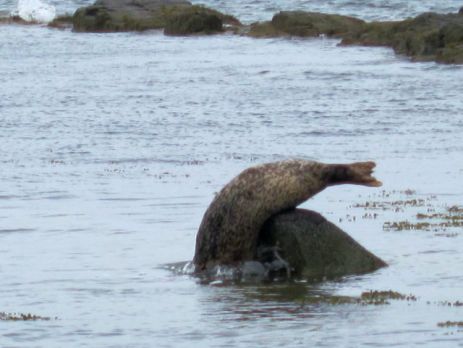 6 thoughts on “Return to Arran, where the world was stilled”