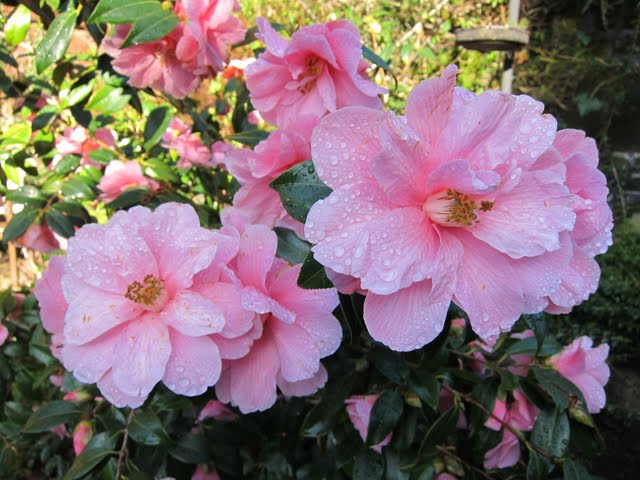 There has been a real sense that spring can’t be far away today, with the temperature rising to the the low sixties in old-fashioned fahrenheit.  The camellia in our back garden is always the first plant to put on a show, usually in late January or early February, the luxurious blossoms seeming so improbable appearing at a time when the weather is still nippy.

This year, it bloomed particularly early as a result of the mild spell over Christmas and New Year.  Then a week of hard frosts came and it looked as if someone had taken a blow-torch to the plant, as the petals were scorched brown.

But over last weekend it got a second wind, and the result has been these luscious flowers, photographed with the dew still on them, glinting in the morning sun. I was surprised to learn from Wikipedia (whose entry informs much of this post) that the camellia in our garden, which  originates from eastern and southern Asia, from the Himalayas east to Japan and Indonesia, is a relative of the tea plant. 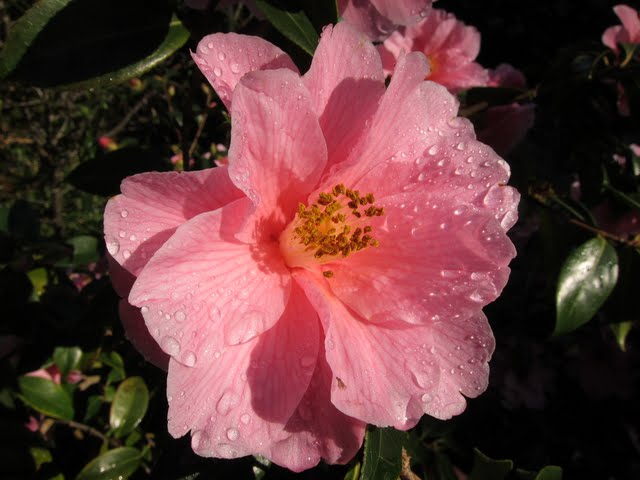 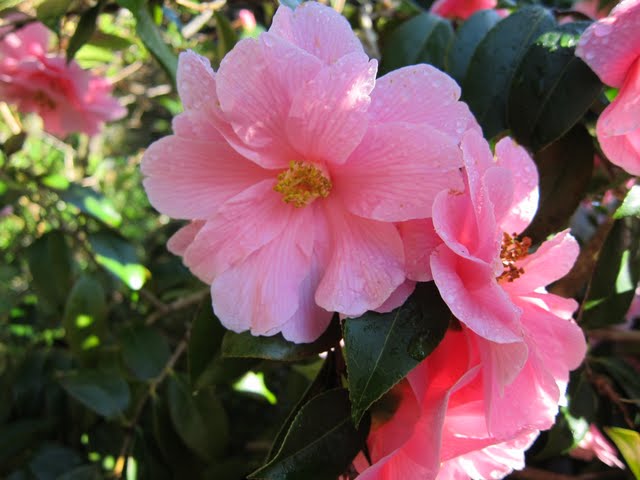 Camellias were cultivated in the gardens of China and Japan for centuries before they were seen in Europe. The German botanist Engelbert Kaempfer reported  that the ‘Japan Rose’, as he called it grew wild in woodland and hedgerow, but that many superior varieties had been selected for gardens. Europeans’ earliest views of camellias would have been their representations in Chinese painted wallpapers, where they were often represented growing in porcelain pots. 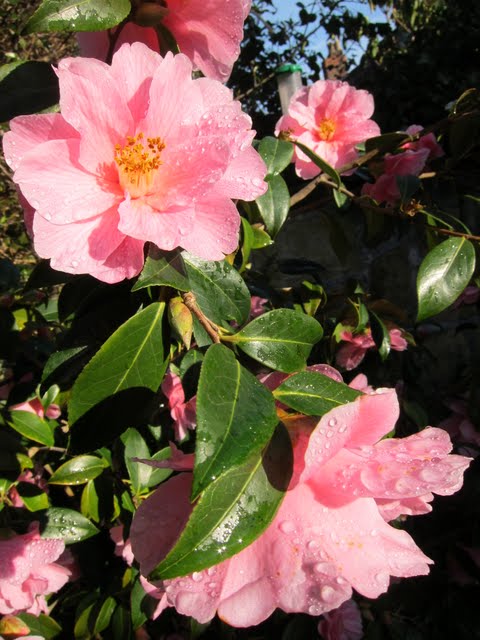 The first living camellias seen in England were a single red and a single white, grown 1739 in the garden of  Robert James, Lord Petre at Thorndon Hall in Essex. Petre was one of the keenest gardeners of his generation, and his head gardener, James Gordon, was the first to introduce camellias to commerce, from nurseries he established after Lord Petre’s death in 1743. 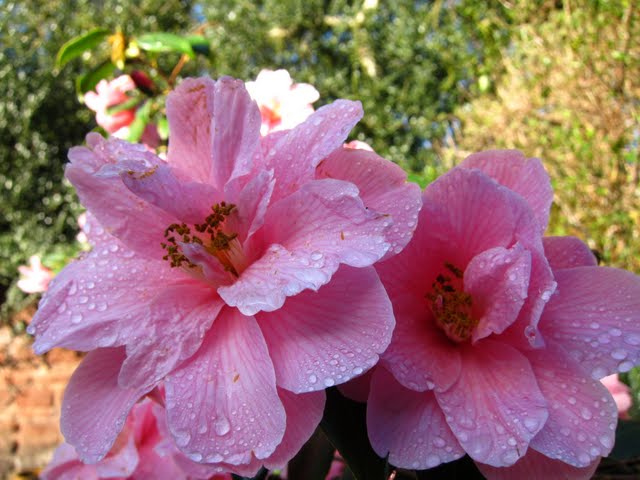 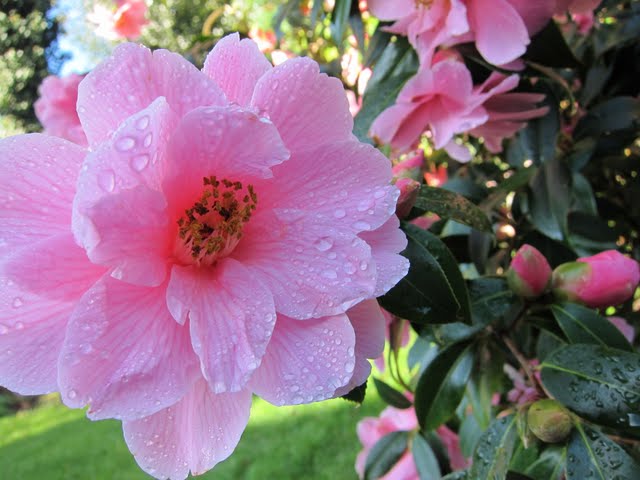 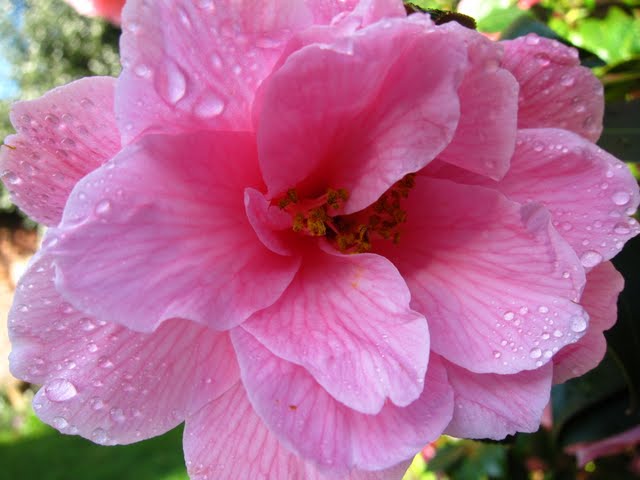 With the expansion of the tea trade in the later 18th century, new varieties began to be seen in England, imported through the British East India Company.  By 1819, twenty-five camellias had bloomed in England, and that year Samuel Curtis published A Monograph on the Genus Camellia, with illustrations by Clara Pope that have usually been removed from the book and framed.

An English artist and artist’s model, Clara Pope was born in 1768. In her early years she derived an income from a modeling career, eventually marrying her primary employer, the artist Francis Wheatley. Pope possessed considerable talent as a painter and portraitist and climbed the social ladder with her talent for painting portraits of those in high society. Eventually Pope was discovered by Samuel Curtis, the editor of Curtis’ Botanical Magazine, who commissioned Clara to make the paintings for his Monograph on the Family Camellia. The book was published in 1819.

Monumental in scale, the colour plates measure 24 x 18 inches. The leather-bound folio was comprised of only five hand-coloured engravings. Very few copies were sold, probably because of the prohibitive cost. Today the work is recognized as the finest of all the great camellia books. Fewer than ten copies of the complete book are known to exist in the world today.  Kew Gardens has a complete set of the engravings.

By the 1840s, the camellia was at the height of its fashion as a luxury flower.  A decline in popularity followed as they were displaced by the new hothouse orchids. Camellias experienced a revival after World War I as easy to grow winter-flowering shrubs.

The Bengali polymath Rabindranath Tagore wrote a very long poem in the early 1900s entitled ‘Camellia’, about a young man who falls in love with a beautiful girl.  There’s a rather lovely recitation in Bengali on YouTube:

One thought on “A hint of spring: camellias”