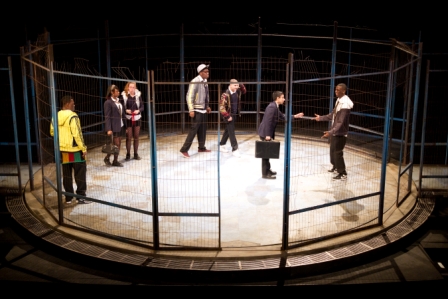 Mogadishu is about a white teacher who tries to protect a black student from expulsion after he pushes her to the ground, but he turns the tables, accusing her of assaulting and racially abusing him.  This is the first play from Vivienne Franzmann, herself a former secondary school teacher.  Last year, after it had premiered at Manchester’s Royal Exchange theatre, it became joint winner of the Bruntwood Playwriting Competition. Now the play is on tour, and I went with teacher-daughter to see it at the Liverpool Playhouse.

I came away irritated and less than impressed by the play.  Let me say straightaway that there is a great deal of fine acting in this performance – most notably by those playing the teenagers, and especially by Rosie Wyatt as Becky, the accused teacher’s daughter.  Vivienne Franzmann’s script fizzes in the schoolyard exchanges between the teenage students, crackling with racial tension, sexual innuendo and misogyny – clearly Franzmann listened hard during those years as a teacher.  There’s a real sense of the brutality and boredom, loyalty and betrayal of the school yard.  Much of the repartee, with its slang and sex and drug references, passed me by; but an audience largely populated by parties of school students lapped it all up with great hilarity.

The play, of course, has nothing to do with Mogadishu – a place that, when referred to by her mum and challenged to locate, middle-class Becky responds: ‘I’ll Google it later’.  Clearly, though, Franzmann wants us to see the playground as a civil war zone, and the production reinforces this, with the stage encircled in a ring of wire fencing that gives the kids the look of caged animals.

That said, I found the play unconvincing.  When white teacher Amanda intervenes to prevent a studious Turkish student being attacked by Jason, a black pupil, she is knocked to the ground.  She refuses to report the incident, despite Jason having a track record and already being in line for exclusion.  Instead, she finds herself wrongfully accused by Jason, and matters swiftly degenerate.  It’s the character of Amanda that I found completely implausible.  Even as the crisis closes in upon her, even when she is suspended, she maintains a blithe assurance that Jason, being fundamentally decent, will admit he lied.

Amanda won’t go to her union for advice, and won’t listen to those closest to her: daughter Becky (who is so remarkably full of common sense that it stretches credulity that she could be so smart and her mum so stupid) and her husband (who, it turns out, is black).  Instead she puts her faith in a rather inept acting Head and the members of Jason’s gang, that they will retract their identical stories that back up Jason’s.

Franzmann obviously seeks to chart the impact that a false allegation can have in these bureaucratic times.  So a minor incident escalates into a career-threatening confrontation with the education authorities, social services and the police – but the play fails to make this credible.  Worse still, Franzmann pours in every conceivable ingredient. It’s not enough to explore the tensions implicit in dealing with racism and violence in the school setting: we must have three suicides and self harming as well.

There’s far too much repetition, in playground and domestic scenes, of characters screaming at  each other for being an idiot, for changing their mind, or not changing their mind.  The tone alternates wildly: one moment it’s laugh-out-loud comedy, next minute we’re into repressed trauma or domestic abuse.  This would be tolerable if the characters weren’t so two-dimensional.

Mogadishu doesn’t offer any answers, and the ending is infuriatingly glib. The play offers some insights into the bureaucracy of modern education and the realities of playground power, but the script and plotting are as two-dimensional and as unconvincing as an episode of Hollyoaks.

What remains strong in the memory of this play are the playground scenes, and the performances by the younger cast members, full of energy and comedy, and seething with suspicion and uncertainty.

4 thoughts on “Mogadishu: implausible and unconvincing”