From August to November 1969, Simon and Garfunkel worked in the studio on the songs that would become the album Bridge Over Troubled Water, released in February 1970.  It was to be their crystalline swansong.  The duo’s personal relationship had been deteriorating through their late 1969 tour and the album’s recording sessions were also marked by tension, and within months they had split.  Last night I watched Simon & Garfunkel: The Harmony Game, a documentary about the making of the album  broadcast as part of the new season of Imagine documentaries on BBC One.

The album has a special place in my memory.  In the summer of 1970 I had left university and begun living with the woman who I was later to marry. The LP was one of the first that we bought together, and in my mind the jaunty refrain of ‘Cecilia’ remains the soundtrack of that season:

The Harmony Game examined on the process through which the songs on the album emerged and were recorded in those  sessions stretching through the summer and autumn of 1969.  At the time the album was considered a technical marvel and the film revealed the techniques used by producer Roy Halee (‘One of the great engineers of his time and a genius with echo’) to achieve the LP’s distinctive soundscape: all kinds of tricks with echo, vocal blending and tape loops.

The wordless ‘la-la la’ chorus for ‘The Boxer’ was recorded in a chapel at Columbia University. Session man Hal Blaine’s booming drums on ‘The Boxer’ were recorded in a corridor at CBS Records for maximum echo, and almost gave an elderly security guard a heart attack when he emerged from a lift. Paul Simon explained that the unique percussion on ‘Cecilia’ emerged from a long evening with friends, thumping and shaking domestic objects and recording the sounds on a home-made tape from which a 1 minute 29 second section was sliced and then looped to become the rhythm track for the song.

There were interviews with pretty much every significant person involved in the creation of the LP and a track-by-track analysis of each song’s inspiration and development.   Speaking of the day when the melody for ‘Bridge Over Troubled Water’ came to him, Paul Simon said, ‘I remember thinking, ‘This is considerably better than I normally write’.’  Even so, he didn’t think it was a hit single – too much piano. It was the boss of Columbia Records at the time who saw that this slow, almost hymn-like song was something special and insisted that it should be the first single off the album.  Simon recalled that the chorus was partly inspired by a line from a 1958 Swan Silvertones record that he was listening to at the time. At first, there were only two verses, but Garfunkel and producer Roy Halee thought the song needed three, and a ‘bigger’ sound towards the end. Reluctantly, Simon agreed and penned the final ‘Sail on, silver girl’ verse.  The sound recordist on the session misheard the title and  labelled the track ‘Like a Pitcher of Water’.

We learned that ‘The Only Living Boy in New York’ was about Art travelling to Mexico to film Catch-22, the line ‘Tom, catch your plane on time’ referring to Art’s earlier identity as Tom in their first group, Tom and Jerry. Simon explained that ‘El Condor Pasa’ was based on traditional Andean folk tune he had heard performed in Paris by a Latin American group.  He wrote lyrics to sing over the group’s instrumental recording that featured musicians playing traditional instruments including the charango made with from the shell of an armadillo.

In many ways, Bridge Over Troubled Water was an album that looked back, nostalgic for the innocence of pop in the 1950s when the duo were starting out on their musical career, modelling themselves on the harmonies of the Everly Brothers (it includes a live version of  ‘Bye Bye Love’). But Simon also admitted that they felt they were constantly playing catch-up to the advances in pop music being made by the Beatles and the Beach Boys. 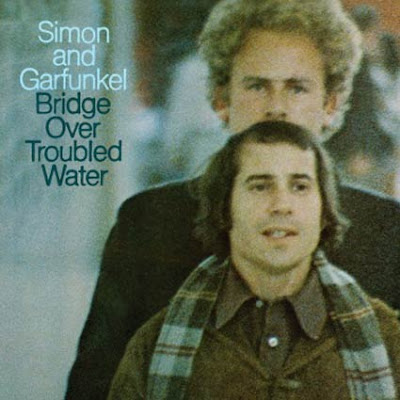 Coming right at the end of a decade in which popular music broke through to new heights, ‘Bridge Over Troubled Water’ is a sublime coda, with Art Garfunkel’s exquisite, soaring vocals and Paul Simon’s beautiful words combining, even now 40 years later, to raise the hairs on the back of the neck.

The LP was a massive hit and one of the best-selling records of the decade, staying at number 1 on the charts for six weeks. In the 1970 Grammy Awards it won Record of the Year and Album of the Year for the album and the title track.

Most notably on its title track, the album had, in parts, a soothing  and quietly reassuring tone for an unsettled time.  In other moments it was just plain fun.Whatever mood they captured, most of the songs matched the standard of craftsmanship of  the previous Simon and Garfunkel album, Bookends.  Its concluding track, the beautiful miniature ‘Song For The Asking’, evokes the sense of an era ending in a similar way to the Beatles’ ‘The End’.

A really interesting element of The Harmony Game concerned a television special – Songs of America – built around the album and featuring a mix of live concert recordings intercut with footage of urban poverty, civil rights marches, the Poor Peoples March, and the Vietnam war. The show’s sponsor, the telephone giant AT&T, hated it and pulled out. It was eventually screened with a new backer – Alberto Culver, the shampoo manufacturer.

Charles Grodin, the director of Songs of America,  told how a representative from the advertising agency was furious: ‘You’re using our money to sell your ideology’.  ‘I said, what’s my ideology?’  He said, ‘Humanistic approach!’  I said, ‘You mean there are people who are against the humanistic approach in America?’ He said, ‘You’re goddam right there are – the southern affiliates of AT&T are not going to appreciate seeing black and white kids going to school together’.

Paul Simon recalled: ‘It was the first time that ‘Bridge Over Troubled Water’ was played on TV, and it was played over footage of the trains that carried Jack Kennedy, Bobby Kennedy and Martin Luther King at their funerals.  The sponsor said, ‘It isn’t balanced – they’re all Democrats’.  We said – we think of them all as assassinated people.’

‘I guess in retrospect it’s something to be proud of because we spoke up for who we were …. and our generation’, said Simon.

2 thoughts on “Bridge Over Troubled Water: harmony and disharmony”