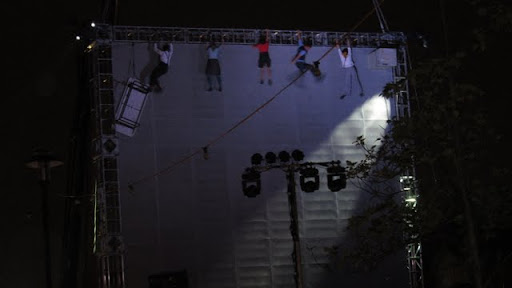 Another Saturday, another spectacle.  After last week’s dazzler from The Macula at the Liver Building, last night as darkness fell I went down to the Anglican Cathedral to see Liverpool’s Wired Aerial Theatre production, As The World Tipped.

Billed as ‘A real life disaster movie performed live in the night sky!’ this was an ambitious and extraordinary piece of aerial theatre.  It began on the level with the cast acting out the negotiations and frustration of the Copenhagen Climate Change Summit on a stage outside the cathedral.  Then, as the paperwork mounts and deadlock sets in, delegates fail to notice as the world – literally and metaphorically – slides toward disaster.

As the stage begins to rise against the night sky, tables and chairs, stacks of paper and the actors begin to slide.  Minutes later, a few f the delegates are clinging on desperately, suspended some thirty or forty feet above the audience in the night sky (above).  As the performers struggle to survive in an increasingly precarious world, the effects of drastic environmental catastrophe are revealed in huge film images projected around them.

Although the production would have benefitted from being trimmed by about ten minutes, As The World Tipped  combined dramatic visuals with breath-taking aerial performance to expose the failure of global leadership at Copenhagen in the face of the most urgent challenge facing the planet. 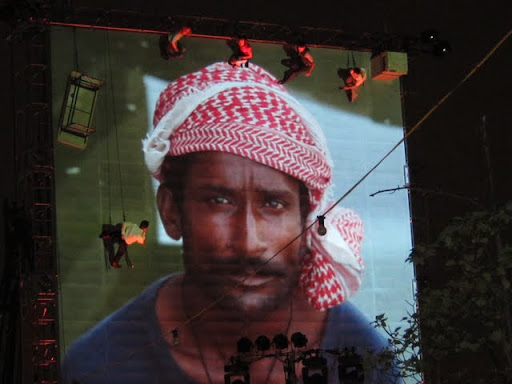 A big passion in my life in recent times has been to use theatre to explore one of those issues that confronts all of us, and all of the species and creatures that we share this planet with. That is the issue of climate change is one of the most important challenges the world faces and through performance, As the World Tipped confronts it head-on, in a powerful, dramatic way .

The show features film footage by Yann Arthus-Bertrand from his film about climate change, Home and by Gideon Mendel from his films about the floods in Pakistan and Australia (above). 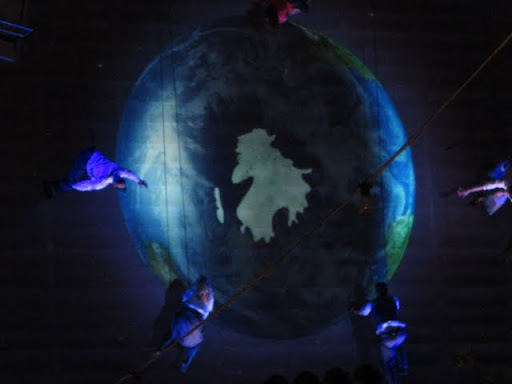 This is a very physical performance as the aerial acrobats are suspended and crawl over the giant vertical screen that the stage has become, and are dwarfed by the huge filmed images projected around them.  At one point, dramatic visuals illustrate the likely future shrinking of the Antarctic ice cap (above), followed by sequences in which the aerial performers struggle against rising floodwaters. 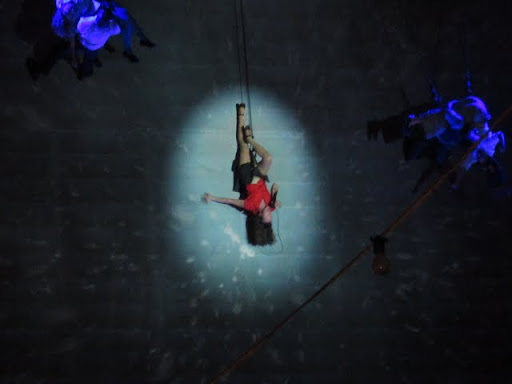 This leads into a musical interlude which puts one of the aerial performers in the spotlight as Lena Horne croons ‘Stormy Weather’ (above).  At the conclusion, the cast take their bow as ‘The End’ is projected in huge letters behind them. But, it’s not quite the end.  The cast appear to rip apart the screen to expose a final message: ‘Demand Change’. 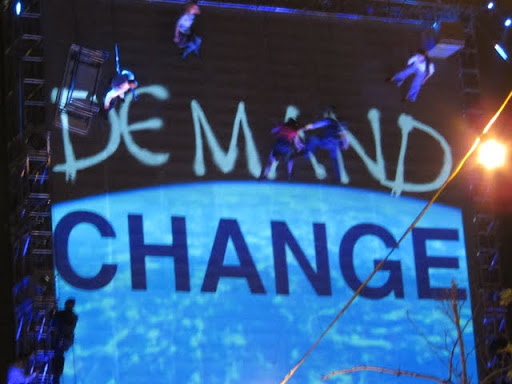