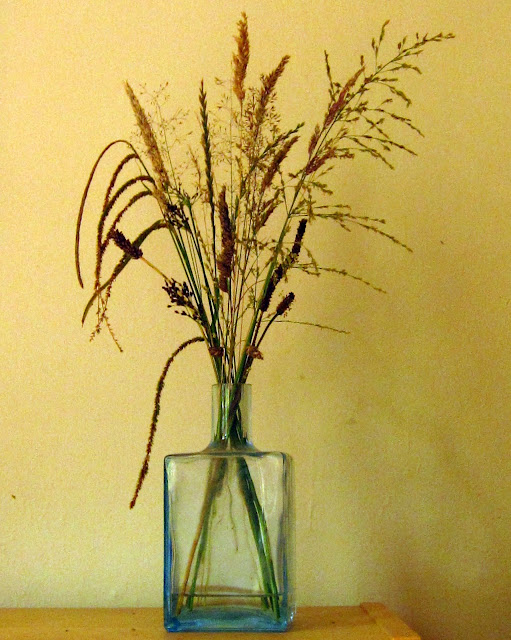 summer grasses:
all that remains
of soldiers’ dreams

I wrote yesterday about meandering through summer grasses fives miles out from the city centre on Childwall Fields.  This morning, in Sefton Park, I gathered these grasses and brought them home.  I’m not sure what there is in there, but I hope there might be Sweet Vernal Grass and Dense Silky Bent, Meadow Foxtail or Tall Fescue, Yorkshire Fog or Squirreltail Fescue.

The haiku at the top of the post is by the 17th century zen master Matsuo Basho who once came to the site of a famous battle, where soldiershad been heavily outnumbered but fought bravely. The poem speaks of transience.  Wars may rage and lives be lost in battle, generals may want to conquer new territory, but all of this striving is no match for time, nature, and the inevitability of summer grasses returning.

Another summer grasses haiku, written at the dawning of the industrial age in Japan is this one, by Yamaguchi Seishi (1901 – 1994):

summer grasses:
the wheels of the locomotive
come to a stop