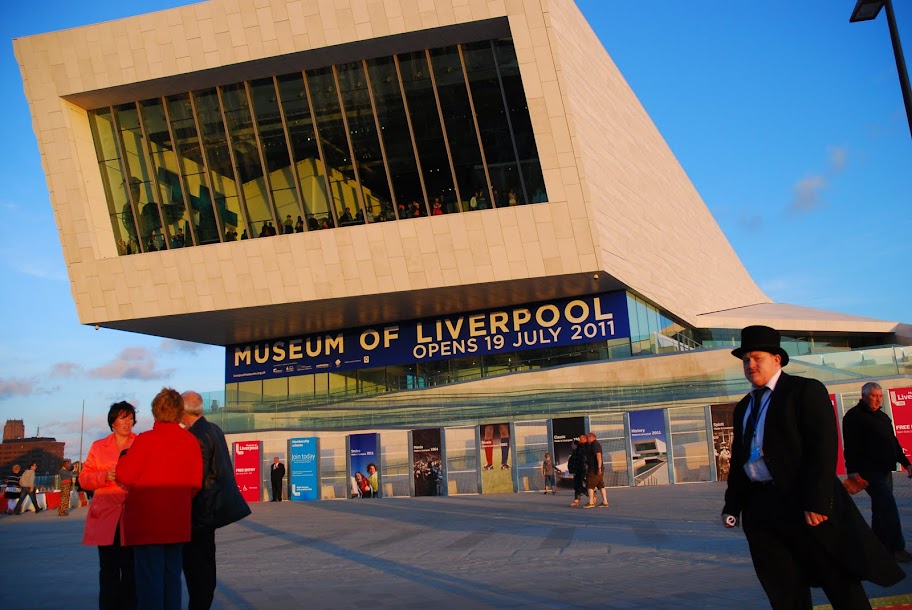 We had a great evening yesterday, father and daughter, down on the waterfront where we joined twin celebrations – of the opening of the new Museum of Liverpool, boosted as the ‘largest city museum in the world” and ‘the largest newly built national museum in Britain for more than a century’, and the 100th anniversary of the opening of the Liver building.

The new museum has had its fair share of criticism (there’s an extensive critique of the building architecturally and of the museum displays by Rowan Moore in today’s Observer).  As far as the building is concerned, I like it.  With its low elevation and unique twisted shape, it does not obscure views of the Three Graces – unlike the horrendous Mann Island development next door, a criminal act of civic vandalism.  The white limestone façade with its relief patterning echoes architectural details of the Three Graces. 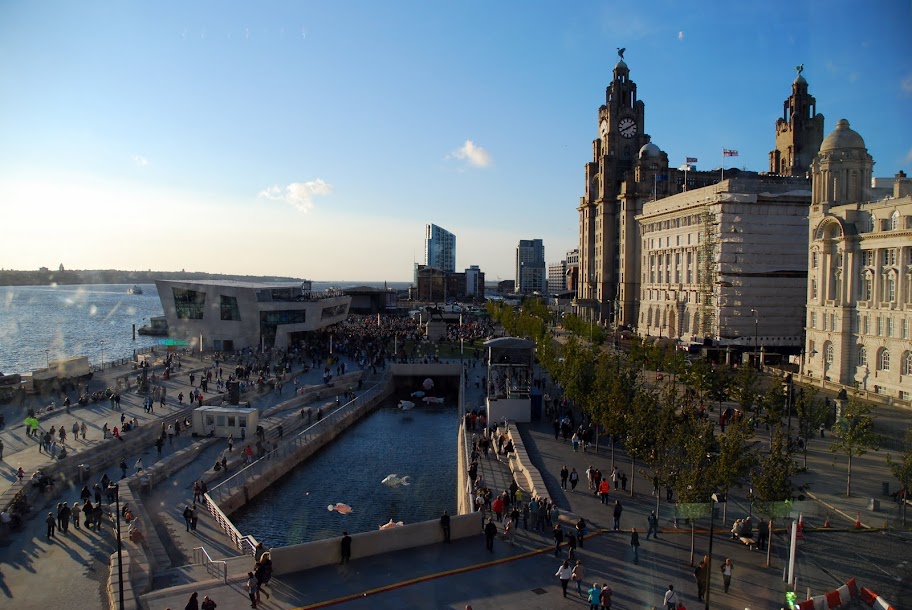 Inside is even better: a huge spiral staircase rises from a spiral set into the ground floor entrance area – a reference to the designs on the prehistoric Calder Stones, the earliest exhibit displayed in the museum.  And on the second floor are the enormous gabled windows that in one direction open up a simply stunning view of the Three Graces and the waterfront plaza in front (above), and on the other side of the building provide a panoramic view across the Albert Dock towards the Anglican cathedral (below). 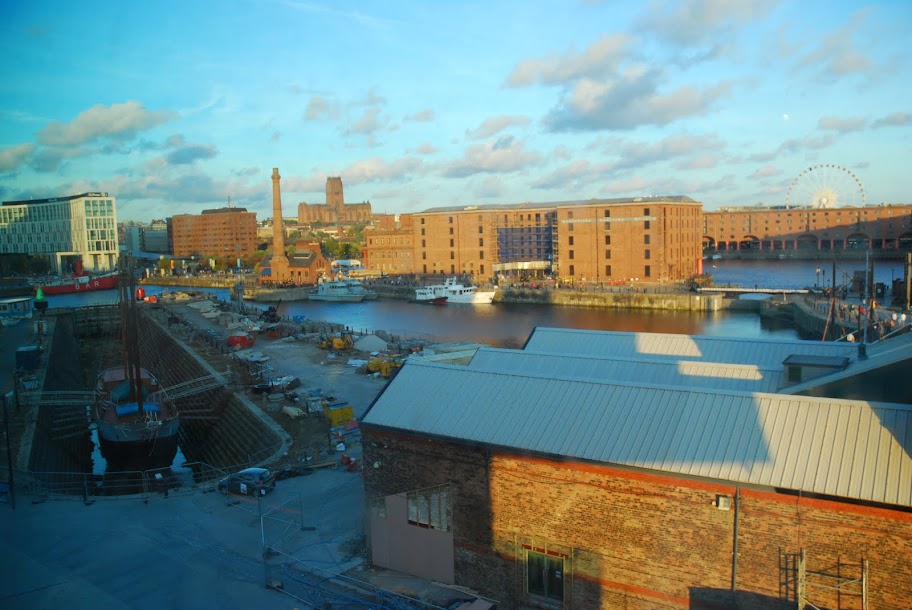 According to the Museum guide, the building footprint occupies an area ‘longer than the pitches at Anfield and Goodison combined’.  Well, it certainly didn’t feel like that last evening (the museum is opening late over three evening this weekend). The photo below gives some indication of the density of the crowds packing into the place this week (something like 14,000 people through the doors every day, the toilets cracking under the strain). 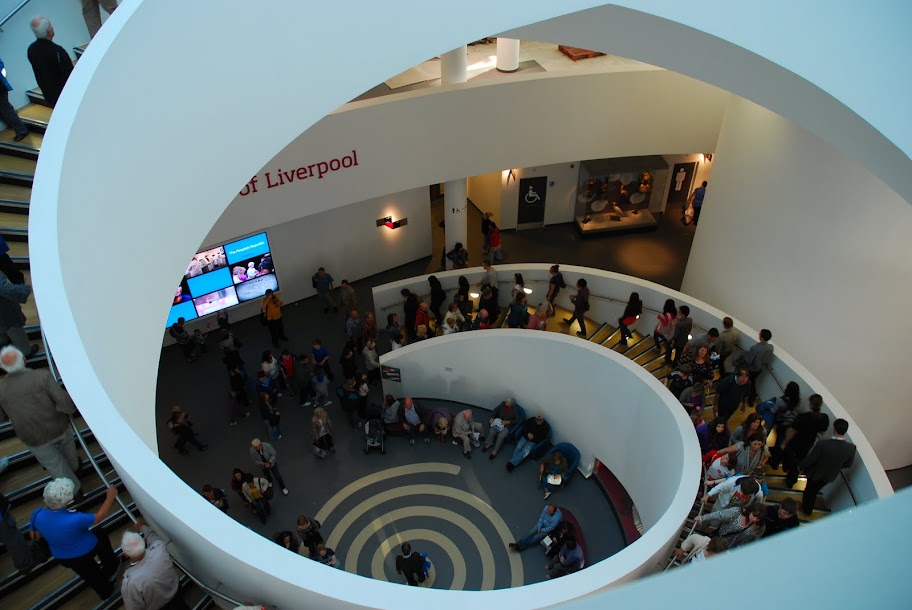 The local Seven Streets blog observed this week that ‘at times the sheer sensory overload of it all leaves you breathless – exhibition floors are choc-a-block with memorabilia, posters, architect’s models, gleaming cabinets crammed with relics, glittering booty and Meccano’, while in The Observer Rowan Moore complained that ‘the pace is frantic. You hardly get a moment to dwell on the horrors of the first world war before you’re on to something else’.

It certainly felt very busy – in both senses.  The spaces seemed small and swept along in the flow and surge of the crowd there was a sense of displays and themes flashing by in a bitty, disjointed manner.  Audio or video displays often collided with each other.  It was hard to concentrate.

But I’ll go back when the crowds have dissipated and hope that it makes more sense then.  Another reason to return is that there still several galleries that have not yet opened – including ‘The Great Port’, a gallery on Liverpool’s transformation from a small tidal inlet to one of the world’s great ports, another gallery devoted to the Overhead railway, and ‘History Detectives’, which will explore the history and archaeology of the city from the Ice Age to the present.

As for now – on the ground floor there’s ‘Global City’, a gallery exploring the city’s global links – from West Africa to China – and the resulting cultural influences.  We didn’t have time to see this, and spent our time on the second floor where ‘Wondrous Place’  celebrates Liverpool music and cultural creativity, as well as the city’s sporting achievements. 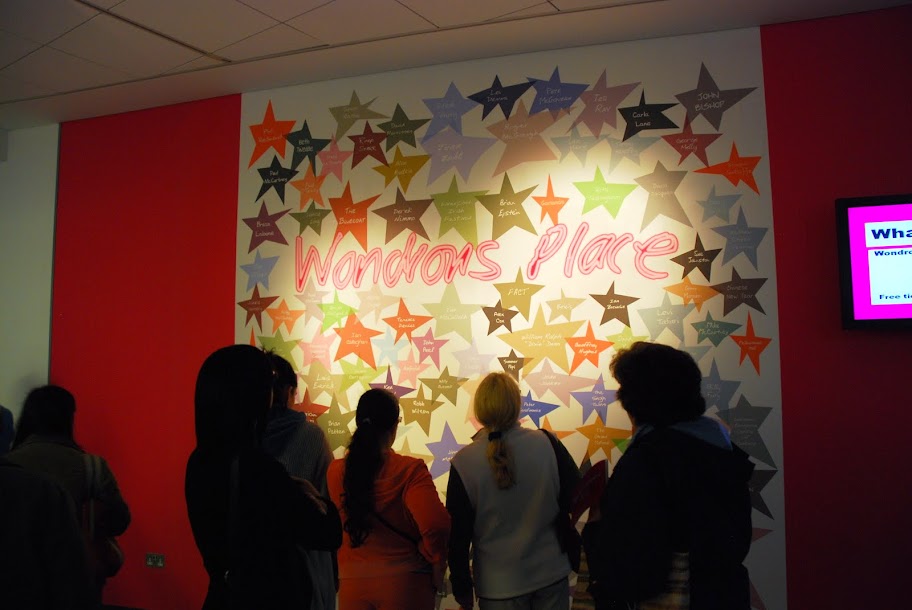 Parts of this seems like a continuation of the World Museum’s excellent survey, in Capital of Culture year, of the city’s musical landscape, The Beat Goes On.  Star exhibits include the church hall stage where John met Paul, Roger McGough’s poem to Macca’s Trousers (with the selfsame trousers), and the bedspread from John and Yoko’s 1969 Bed-In, presented to them by Hull-born designer Christine Kemp during their Bed-In at the Queen Elizabeth Hotel in Montreal (below). 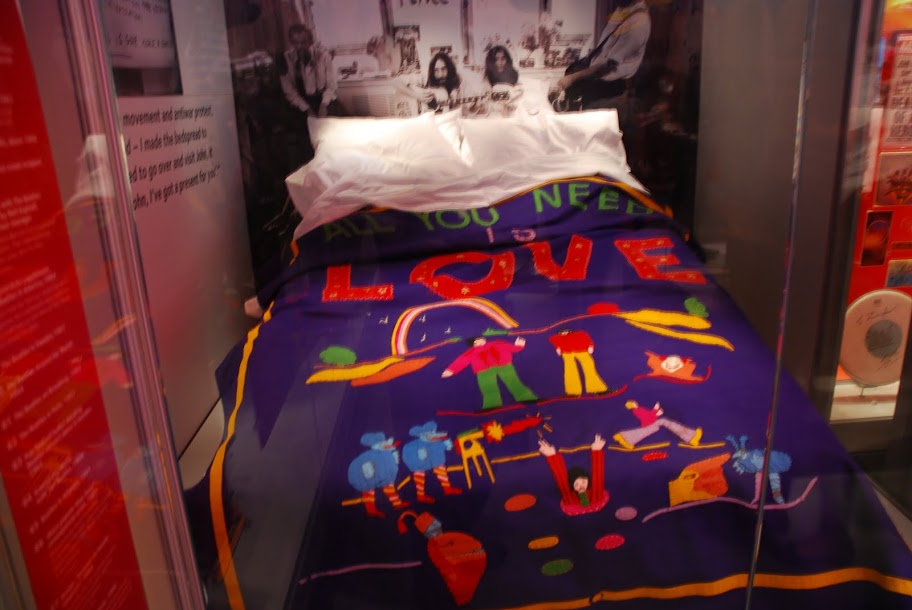 The top floor also plays host to ‘The People’s Republic’, a celebration of the people of Liverpool taking in Liverpool poets and novelists, the scouse accent and distinctive phraseology, and plenty more.  The model of the unbuilt Edwin Lutyens’  design for the Catholic cathedral, only seen previously during Capital of Culture year (below) is there, as well as a reconstruction of the court slum housing of the late 19th century, complete with the sounds and smells of a privvy. 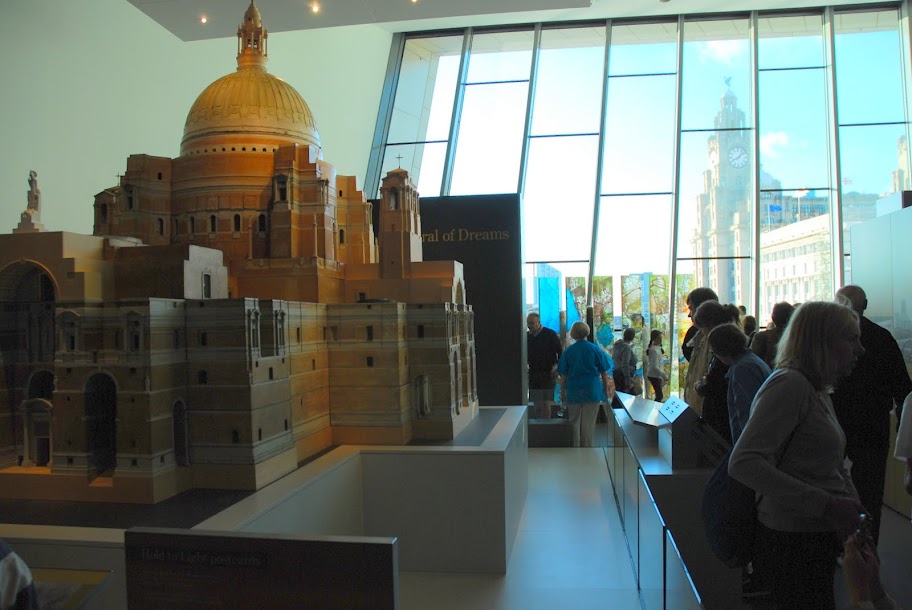 Amidst the hurly-burly, my attention was drawn to the display of  two sculptures rescued during the demolition of  Gerard Gardens council flats in 1987.  Liverpool sculptor George Herbert Tyson Smith made these relief sculptures (below) for the entrance to the flats in the 1930s.  They represent the Architect and the Builder. 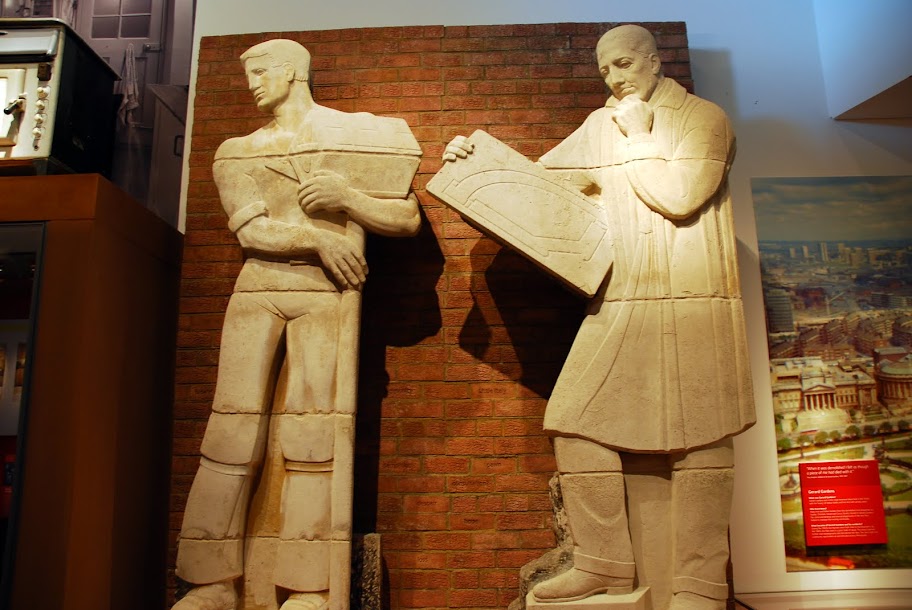 As Seven Streets observed, on first impression this seems to be the most succesful area of the Museum: with its vivid glimpses of ‘the changing shape of the city over the past century, and explorations of religion, ethnicity and politics, you get the sense that, finally, the city’s character – our character – is fleshed out, made visceral. Blood and passion is pumping through these dioramas – taking in everything from the silver service dishes of William Rathbone to a gorgeous, glazed, coal-fired fryer from a 1920s fish and chip shop’. 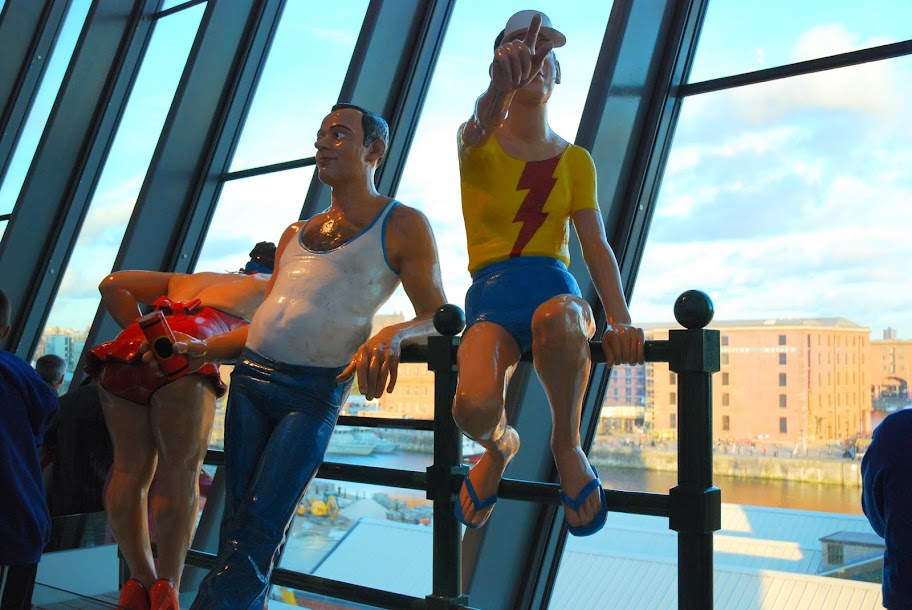 The second floor is also the permanent home of the Liverpool Cityscape by Ben Johnson, commissioned for Capital of Culture year and previously displayed in the Walker (below, click image to enlarge), as well as a sculpture from the International Garden Festival of 1984, ‘Wish You Were Here’ (above) and a temporary exhibition of photos, Mike McCartney’s Liverpool, which was rather disappointing.

After all that it was time to go outside and join the festivities on the waterfront.  On a fine evening, as the sun set over the Wirral, the Liverpool Philharmonic played Beatles numbers, and then, as darkness fell, it was time for the main event. 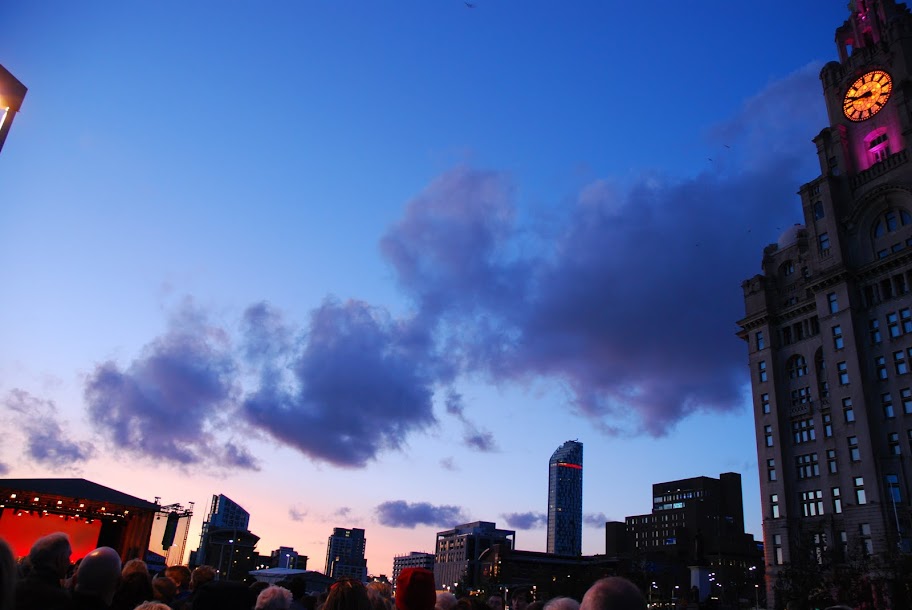 For three nights this weekend, to celebrate the 100th anniversary of the opening of the Royal Liver Building,  Czech Republic-based artists’ collective Macula put on a stunning video display that transformed the Liver Building in a way that isn’t easy to describe in words.  This was no run of the mill light show – it was something else entirely.

Macula have built a reputation for temporarily dressing some of the world’s most iconic buildings in rainbow-hued lights, video-projections and vivid narratives, bringing the hidden histories of these silent landmarks to life in a truly exciting way. See, for example, The 600 Years, a commission from earlier this year for the 600th anniversary of the astronomical clock tower in Old Town Square in the centre of Prague.

Here in Liverpool, Macula were assigned to celebrate the history of arguably the most famous building in Liverpool, designed in 1908 by Walter A. Thomas and completed in 1911.  The Royal Liver Building is 295 feet in height and has thirteen floors. When it was completed in 1911, the Royal Liver Building was Britain’s first skyscraper. It was built using a revolutionary steel and concrete structure.

At the top of the building, sat on each of the two towers are the mythical Liver Birds, the symbol of Liverpool. They are 18 feet tall, have a total wing span of 24 feet and are made of copper. Local legend has it that if they fly away, Liverpool will cease to exist. The Liver Birds are a cross between an eagle and a cormorant (the bird of good luck to sailors). A German sculptor called Carl Bernard Bartels, who was living in England, designed them. When the Great War broke out, Bartels was arrested as a German citizen and imprisoned on the Isle of Man. The City of Liverpool removed all reference to his achievements and at the end of the war, he was sent back to Germany.

The clocks, 25 feet in diameter, are bigger than the clocks in London’s Big Ben and are the largest electrically driven clocks in the United Kingdom. They were built to give mariners the most accurate local time and are said to be accurate to within thirty seconds per year.

The Macula display began with a countdown… 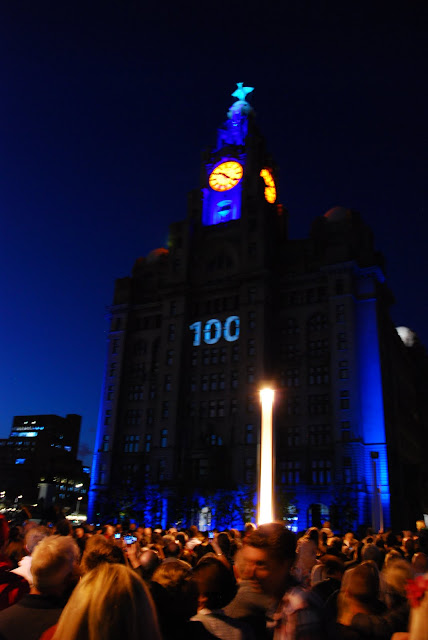 What followed was a series of tableaux in which, in Macula’s words, ‘the suggestive play of light on a physical object creates a new dimension and changes the perception of a seemingly ordinary object. The goal is to achieve perfect symbiosis. …Everything becomes an illusion’.  Here, the idea of the liver bird is visualised across the facade of the building…. 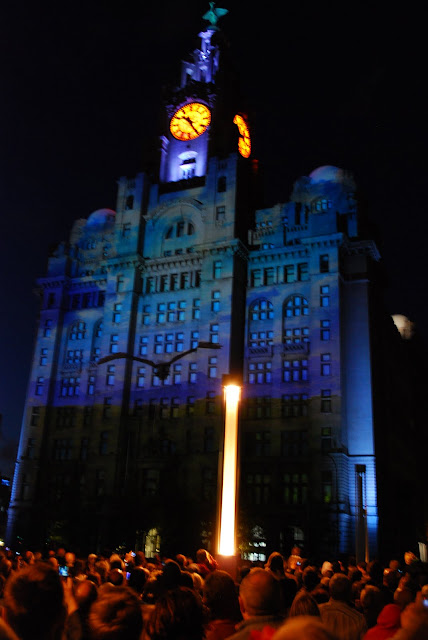 ‘The main objective is to use projections tailored to the selected surface or object to shatter the viewer’s perception of perspective, explain Macula.  ‘The projector allows bending and highlighting any shape, line or space. A suggestive play of light on a physical object creates a new dimension and changes the perception of a seemingly ordinary object’.

The city’s association with the sea and shipping was celebrated in a sequence in which an 18th century trading vessel tossed on the waves out in the ocean…. 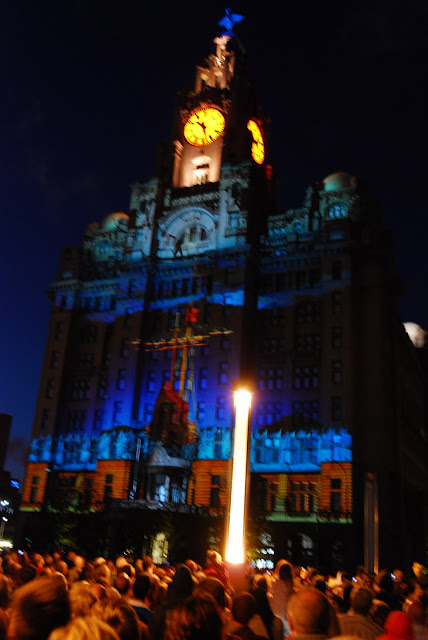 The display concluded with the memory of La Princess, the giant spider, the highlight of Capital of Culture year… 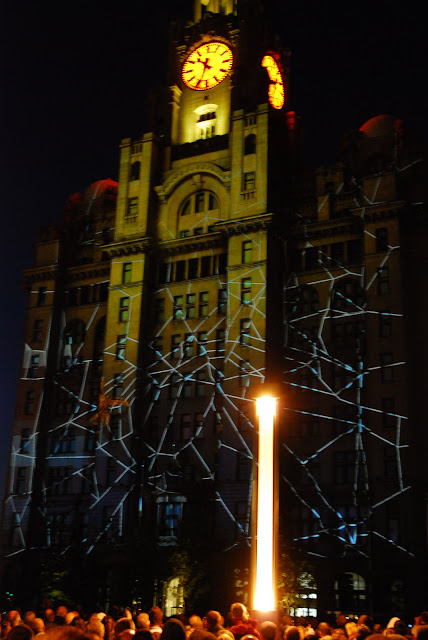 The best way to appreciate all this if you weren’t there is to view Macula’s video of the event:

Macula served up a second helping for Liverpool: a further projection onto the distinctive shape of the new Museum of Liverpool in which the stone patterning of the facade appeared to lift and re-form in geometric patterns, followed by sequences in which the structure took the form of a snowstorm or billowing, Hokusai-style waves.

When it was all over, as we joined the throngs streaming for car parks or bus station, two generations, father and daughter agreed it had been a brilliant celebration – and that, having met so many people we knew among the thousands there, Liverpool is a unique combination of village and city in one wondrous place.

8 thoughts on “On the Waterfront: Liverpool’s new museum”