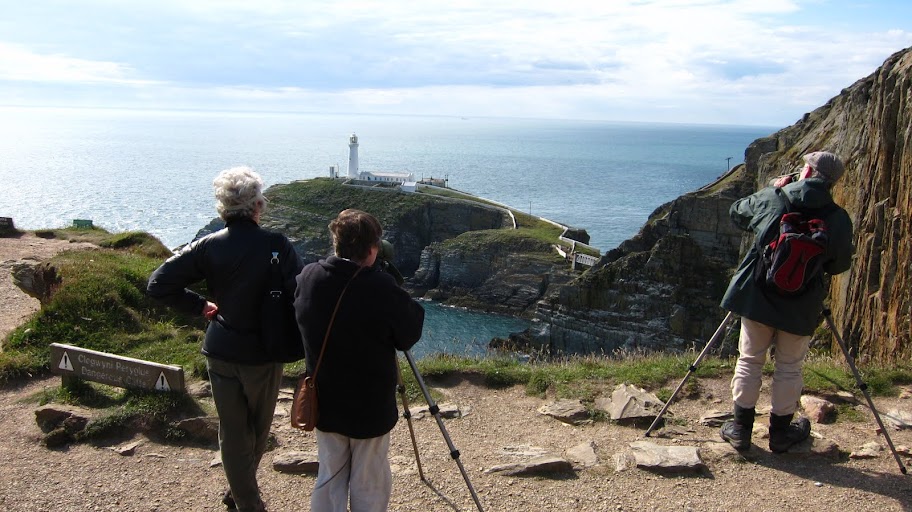 A week after walking at South Stack, the cliffs near Holyhead on Anglesey, I’m back again, this time with birdwatching friends armed with bins and a scope.  And we hit pay dirt: a spectacular display ten feet from where we stand of a fledging chough beating up its parents for food, and, through the telescope, my first-ever sight of puffins, pottering about outside a burrow on the cliffs. 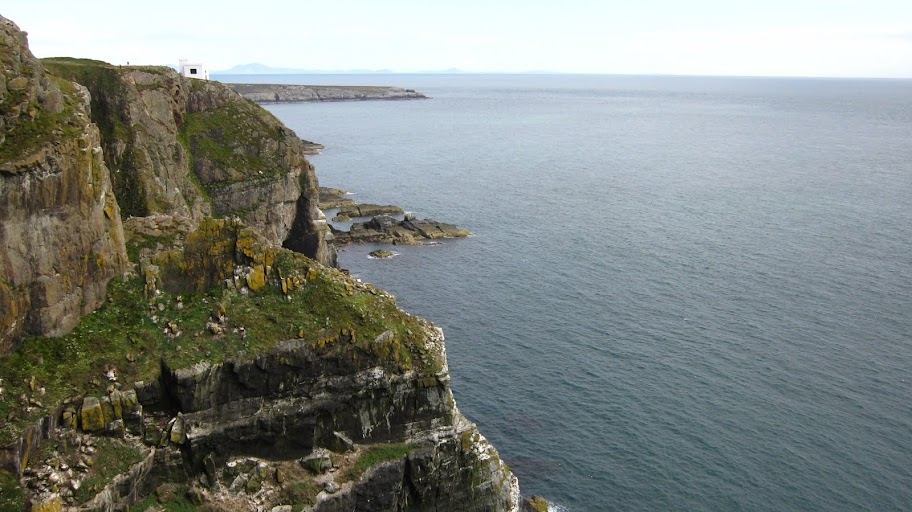 Though R and I had seen choughs before, wheeling above cliffs in Pembrokeshire, the chough is a rare British bird and it is even more rare thing to see such a piece of distinctive  behaviour  close up for several minutes. These are crops from photos I managed to snatch on my pocket camera – not wonderful, but they do capture the aggressive performance of the young chough (though not the bombardment of cries that accompanied it): 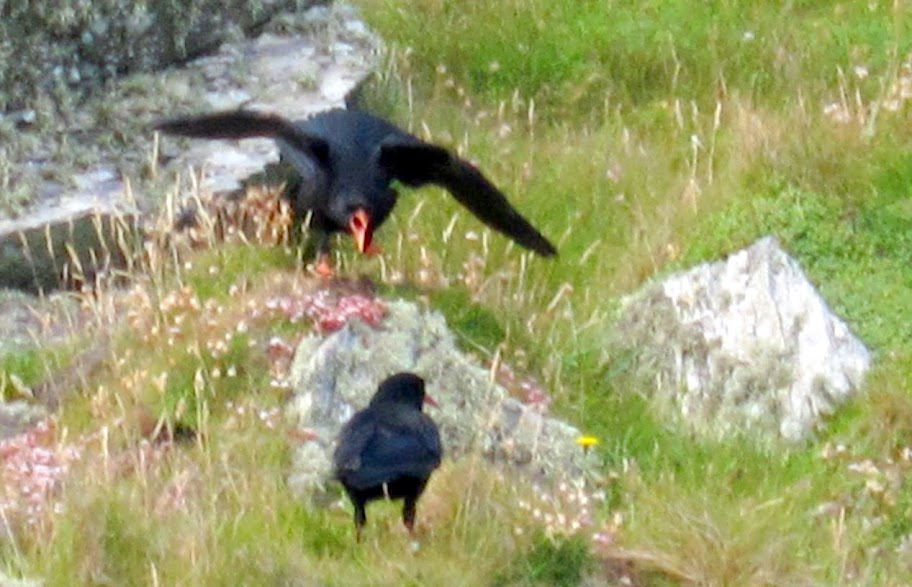 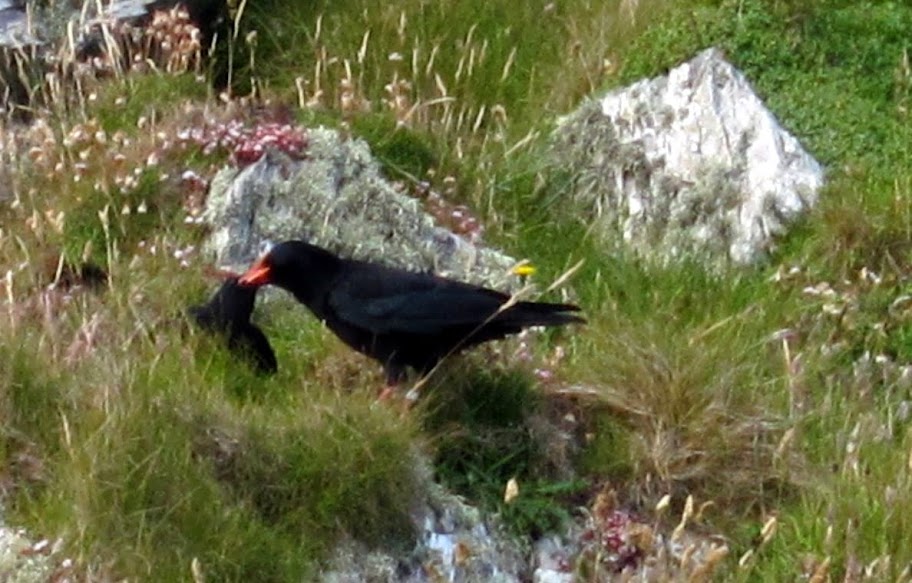 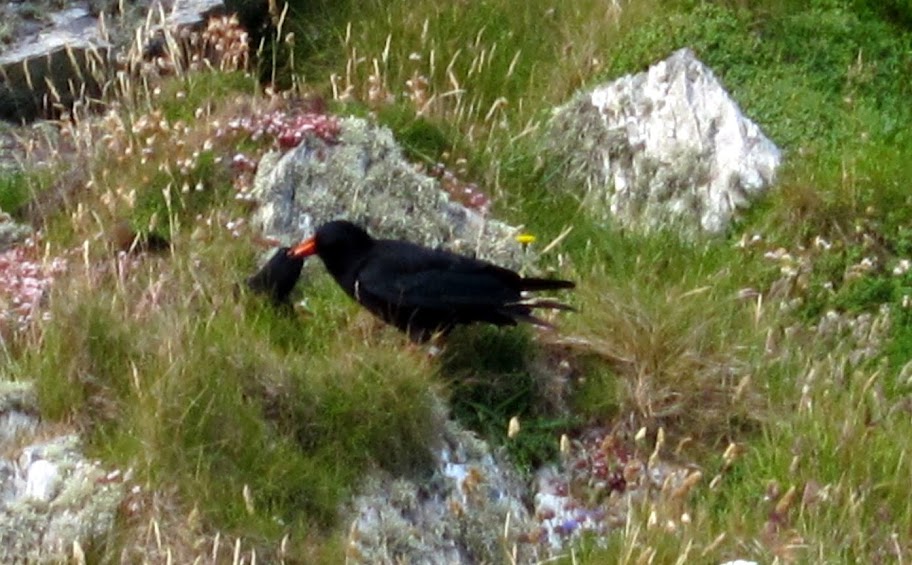 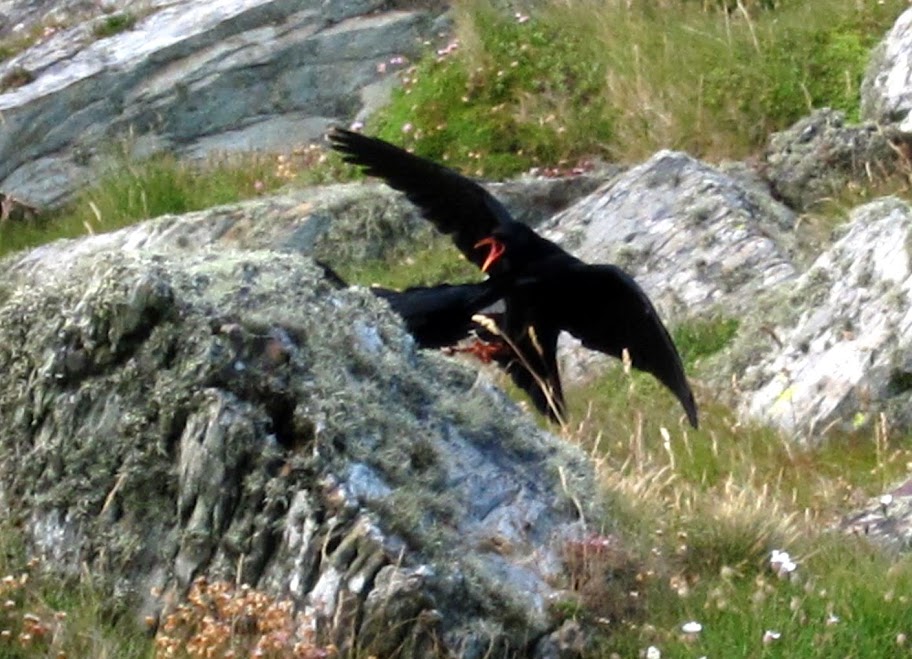 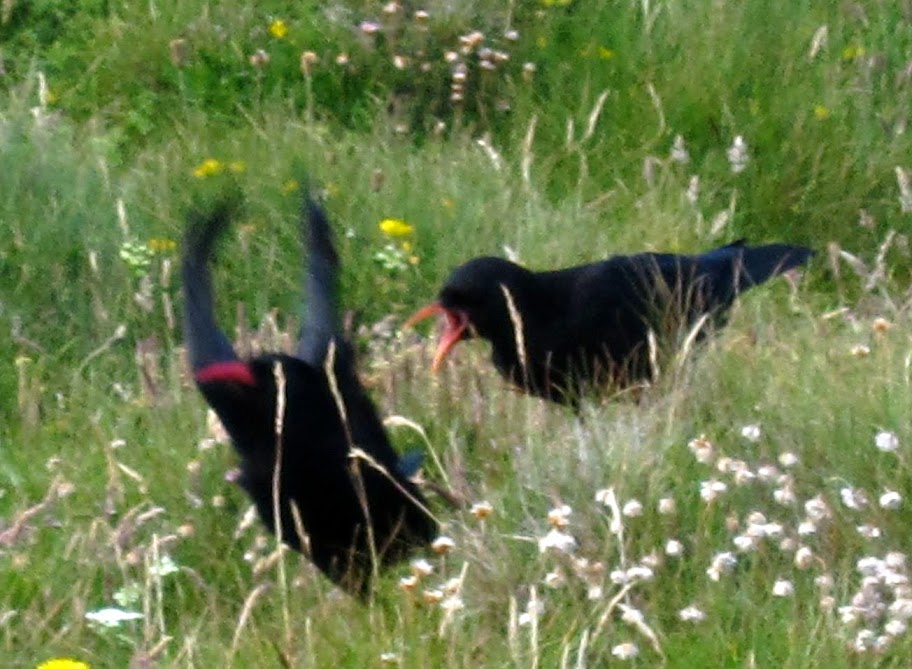 This is a considerably better photo of a chough taken at South Stack by Jim Almond from his Shropshire Birder website:

There are estimated to be only 450 or so breeding pairs of choughs in the UK – mainly in Wales.  The RSPB site states that:

The female lays 3-5 eggs at 1-3 day intervals in April. The female broods the young almost continuously for the first two weeks with the male supplying all the food. Both adults bring food later. The young are fed on regurgitated food consisting of a variety of insect matter, especially ants.

The young fly at 6-7 weeks of age. They are able to feed themselves three weeks later, but remain with their parents for a further 1-2 weeks. Once the young are independent, they join a flock of other immature birds, sometimes many miles from their birth place. They only leave the flock when ready to breed themselves. There are occasional reports of a helper at the nest of an established pair.

The first six months after fledging are dangerous for the young birds, and many of them perish. The birds reach maturity and breed for the first time when they are between two and four years old. Birds that get this far can expect to live for a further three years.

This red-legged, red-billed member of the crow family earned itself the name ‘Cornish chough’ because of its close association with the county for several hundred years.  But, for various reasons by the mid-20th century the chough had virtually disappeared from the county.  The RSPB site records the end:

The year 1947 saw the last successful nesting attempt in Cornwall. An ageing pair of choughs lived near Newquay between 1960–1967 but one of the pair was found dead in March 1967. Its partner patrolled the cliffs alone until 1973 when it too, the last of the Cornish choughs, was seen no more.

Chough was originally the alternative onomatopoeic name for the jackdaw, based on its call. The similar red-billed species, became known initially as Cornish chough and then just chough.  It’s called chova in Spanish , but Crave a bec rouge in French, while to the Dutch they’re Alpenkraai and for the Germans Alpenkrahe. 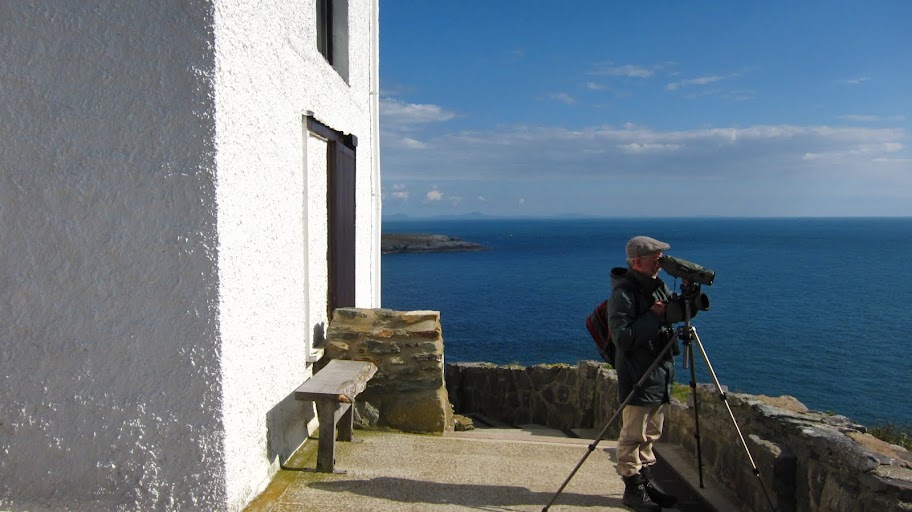 There was more excitement as we descended the steps to South Stack lighthouse. There were already birders of several nationalities gathered, staring intently at the cliff face opposite.  We learned that, in amongst the thousands of razorbills and guillemots, there were a very few puffins to be seen. 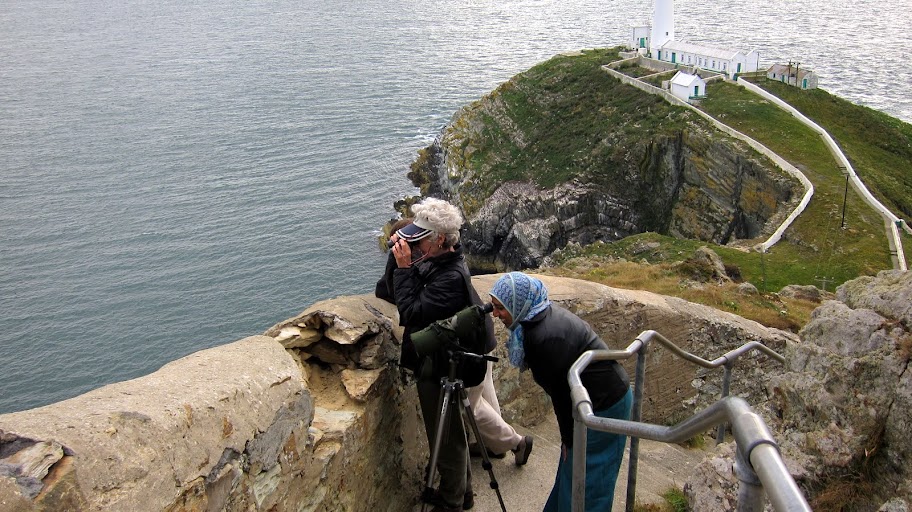 Through the telescope we were able to get a really good view of two or three puffins poking around outside a burrow halfway down the cliff face.  My camera did not have a long enough lens to capture the scene – these photos of puffins, razorbills and guillemots at South Stack were taken by Dave Cullen:

Funnily enough, although R and I had never seen a puffin before, they are much more common birds than choughs – the RSPB estimates there are over 580,000 breeding pairs around the UK coasts. You don’t need to be an ornithologist to recognise a puffin – its colourful and slightly clown-like appearance is well known.

The puffin’s short wings are used for ‘flying’ underwater in search of fish; large wings would be a disadvantage but small wings make flying in air rather more difficult and the birds must beat their wings rapidly to stay aloft.  Puffins spend the winter far out to sea and return to their nesting sites in April, gradually building up in numbers as the egg laying season approaches. They nest underground in burrows, preferring nest-sites close to the cliff-top since the parent birds can come in quickly and then escape again to sea, giving predatory gulls the minimum chance to attack them.

Both parents bring food to the chicks – the commonest item being sandeels, which the parents catch by diving.  Probably the commonest image of a puffin is of the bird with its beak stuffed with sandeels:

Recently there has been concern that a decline in puffin numbers is attributable to a decline in the sand eel population due to intensive fishing, often to produce feed for salmon farms.  The RSPB is campaigning for the protection of sandeel populations.

Towards the end of July, when the chicks are ready to leave, they are still not fully-grown but can fly reasonably well.  However, they are still vulnerable to attacks by predatory gulls, so they leave at night, working their way down to the cliff-edge and taking off in the darkness. They go by themselves and are out of sight of land by day-break. Thereafter, they are on their own and receive no further parental care. 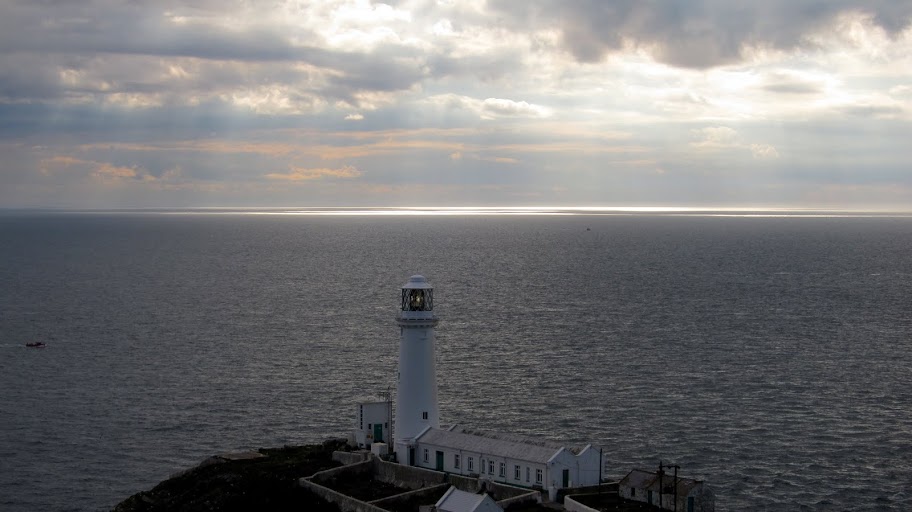 As the sun set over a glistening sea, we turned and headed for home, stopping for fish and chips in Holyhead before we returned to the A55. 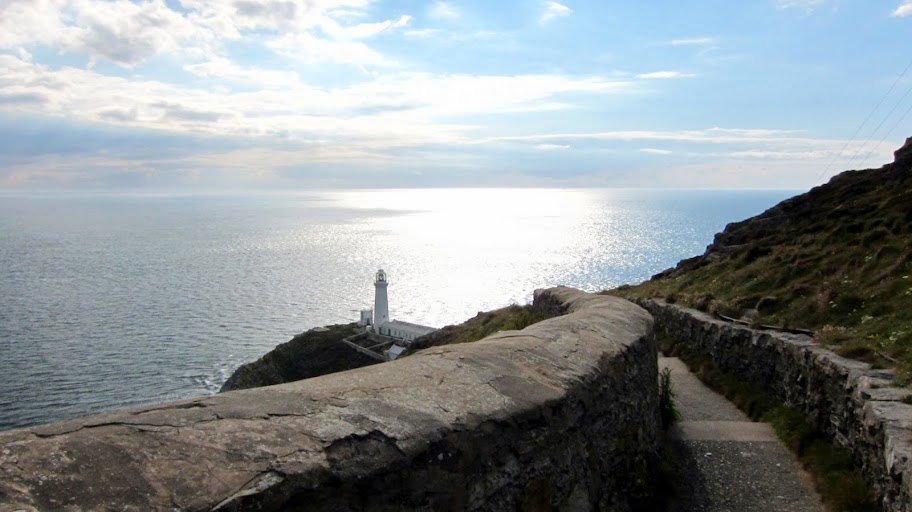 On the last leg of the journey back to Liverpool we called for a pint at the Wheatsheaf Inn, hidden deep in the heart of the Wirral countryside at Raby.  It’s a 16th century thatched inn that has been a watering hole for nearly 400 years and has a reputation for its wide range of well-kept ales. There are nine to choose from, including the award winning Trappers Hat from Brimstage Brewery on the Wirral. 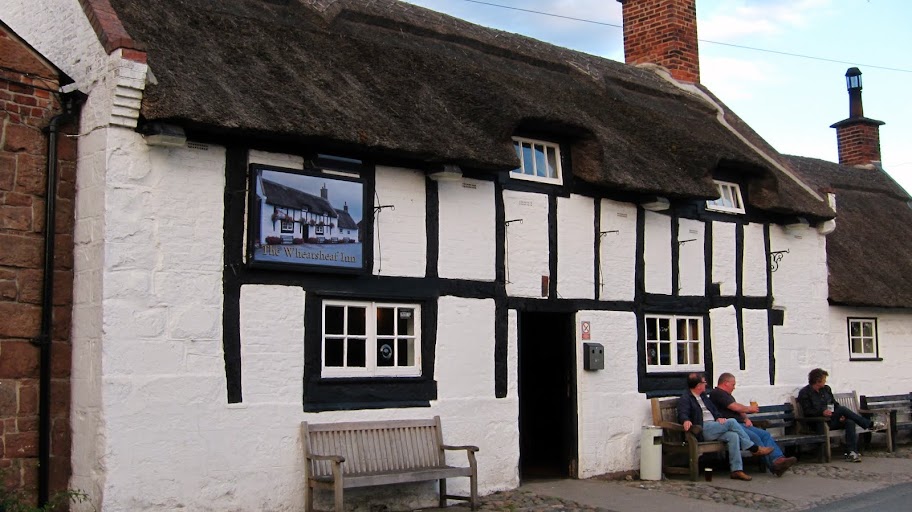 3 thoughts on “Back at South Stack: choughs and puffins”