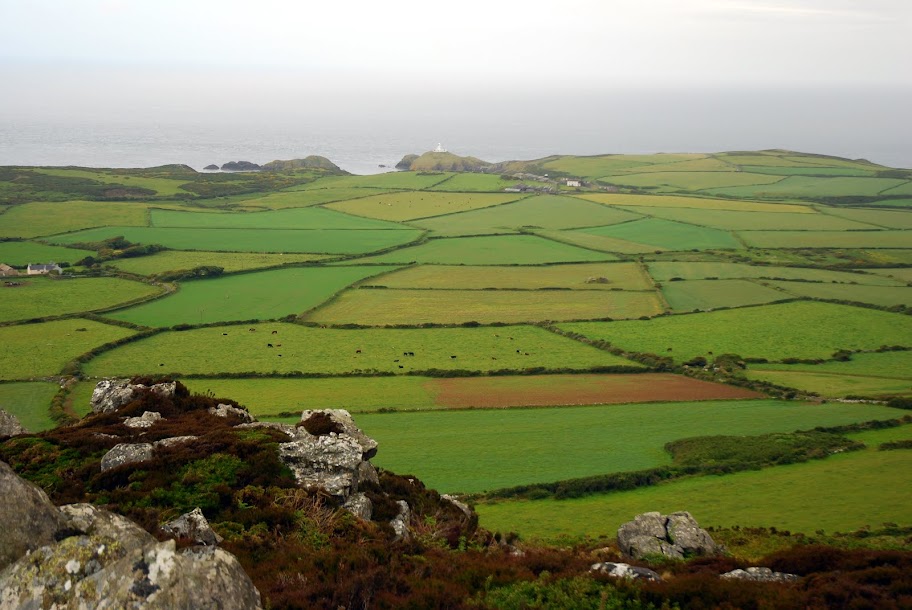 After a chilly and wind-blown couple of days, the weather on our short Pembrokeshire break bucked up yesterday as we set out on a walk out to Strumble Head.  We parked at Pwllderi, It had been spotting with rain as we set off from Solva but we could see the blue skies moving in from off the coast, and within half an hour the day turned sunny and warm. 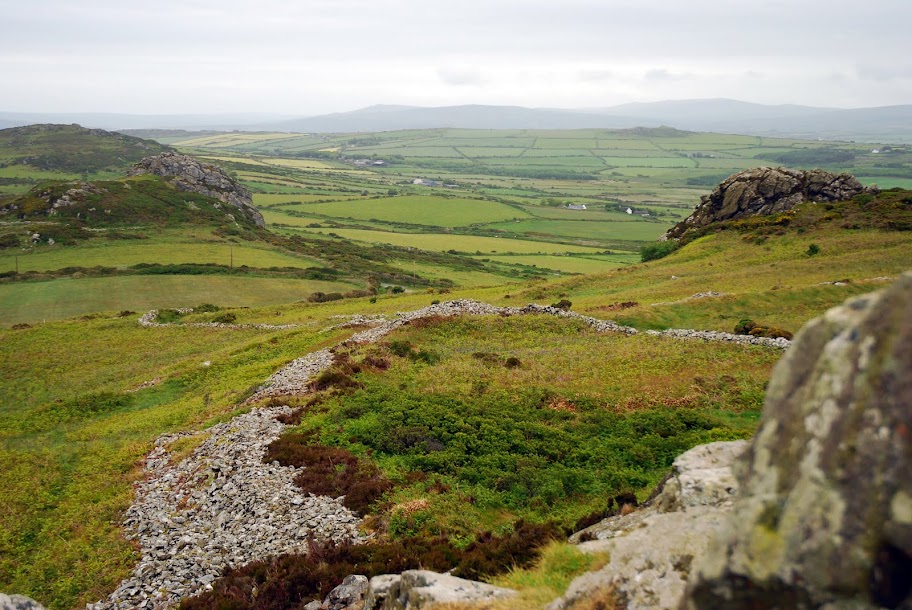 First, we headed up Garn Fawr,  the craggy outcrop that dominates the Strumble headland.  At the top of the ridge are the remains of an Iron Age hillfort from around 100 BCE, considered one of the finest in Britain (above).  At the summit of the craggy outcrop there were superb views across the headland to Strumble Head lighthouse.

Then it was a rocky scramble down to the coastal path.  The coast up to Strumble Head offers the walker some of the most dramatic scenery in the Pembrokeshire National Park.  It is a landscape of headlands and bays, created between 500 and 440 million years ago. At that time Pembrokeshire was south of the equator and volcanoes were active throwing out lava flows that cooled to form very hard igneous rocks. In places the molten rock did not reach the surface, but cooled slowly trapped below the ground. Over millions of years these igneous intrusions have resisted erosion far better than surrounding rocks to become rocky crags like Garn Fawr. 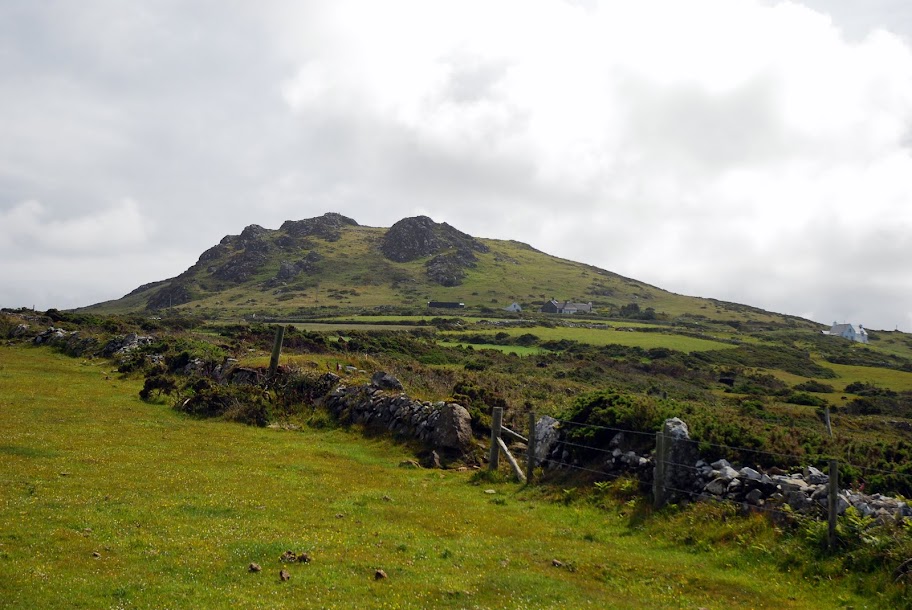 The shoreline with its rocky coves and caves is a haven for grey seals, and we spent some time watching two or three at Porth Maen-Melyn, the next cove round from Pwllderi. 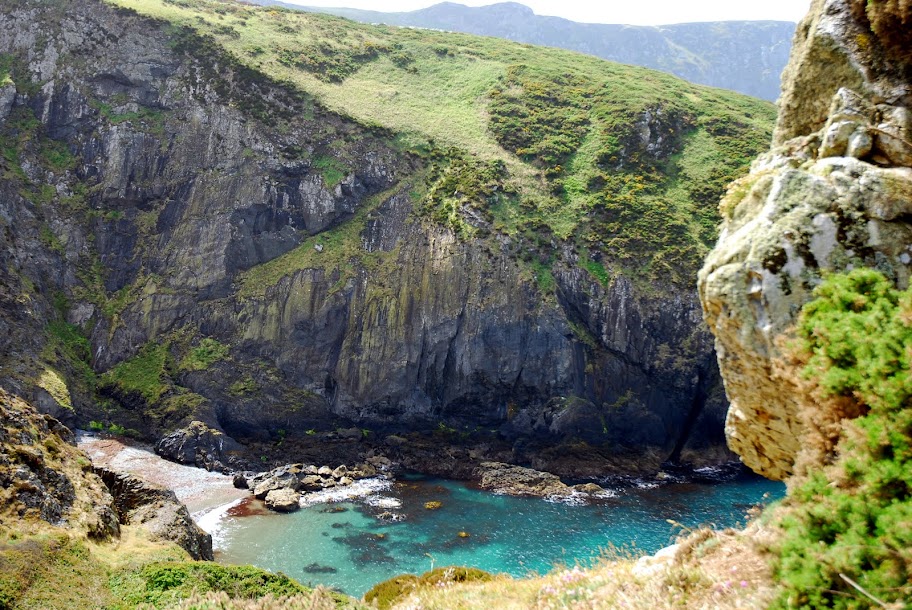 For wildflowers, May and June is the best time to walk the clifftops here.  Bluebells (what seemed a distinctive variety, larger, deeper blue, more ragged petals) still hazed the path edges, along with red campion, sea campion, foxgloves and gorse.  At one point we noticed a lone early purple orchid.  There were occasional splashes of heather and, on the cliff-top sward, drifts of ox-eye daisies and bird’s-foot trefoil. 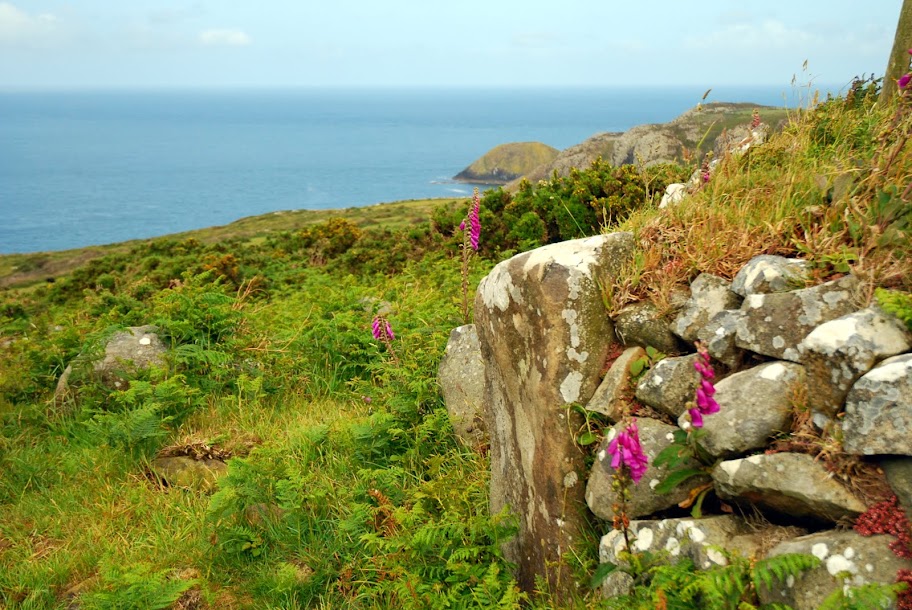 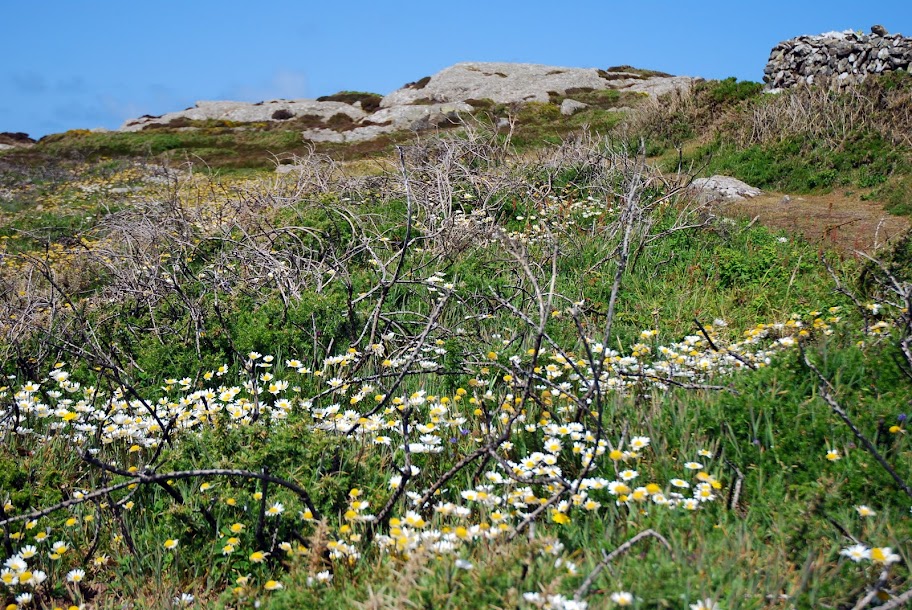 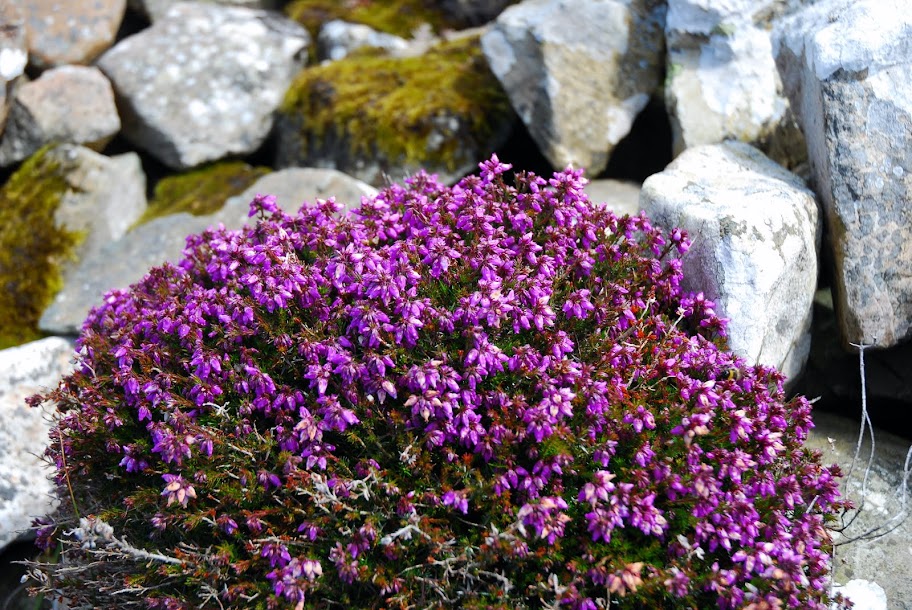 The rock outcrops were covered in the abstract patterns  of lichen and, wherever some moisture and nutrients had  collected in a tiny crack, clumps of stonecrop. 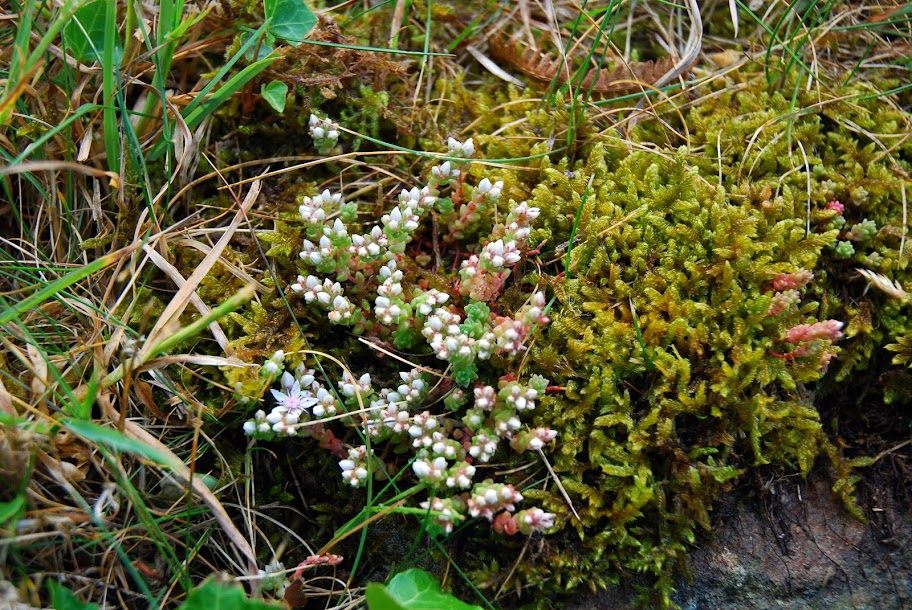 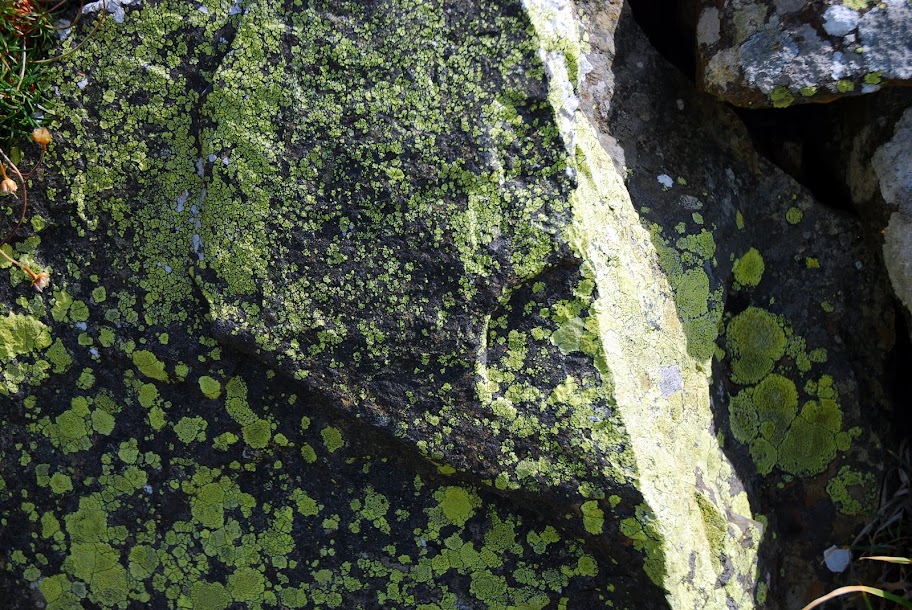 Walking up the lane from Strumble Head lighthouse we encountered this magnificent display of richly-coloured thrift. 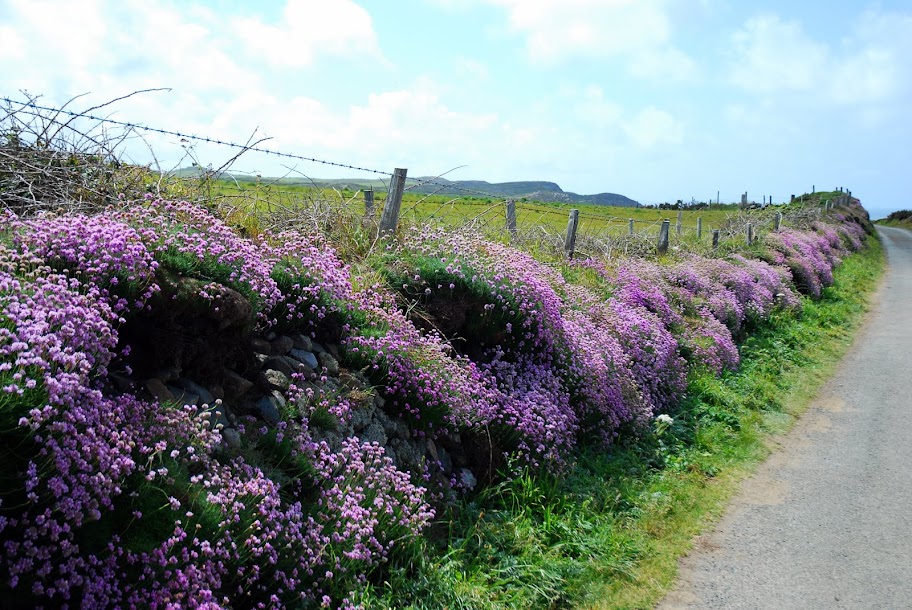 Coughs breed along this coast, but we didn’t see any on this occasion.  Ravens soared above us, and we caught sight of the occasional peregrine. 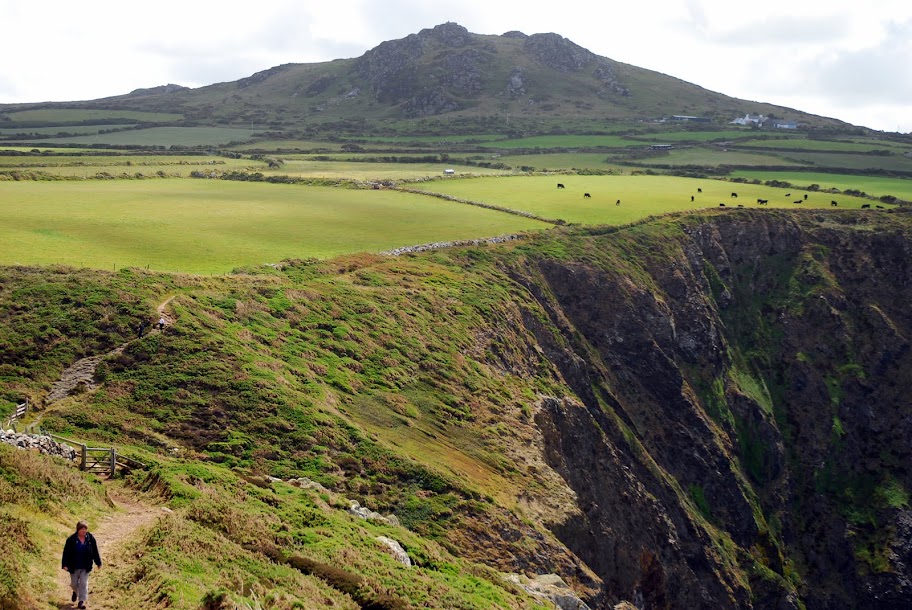 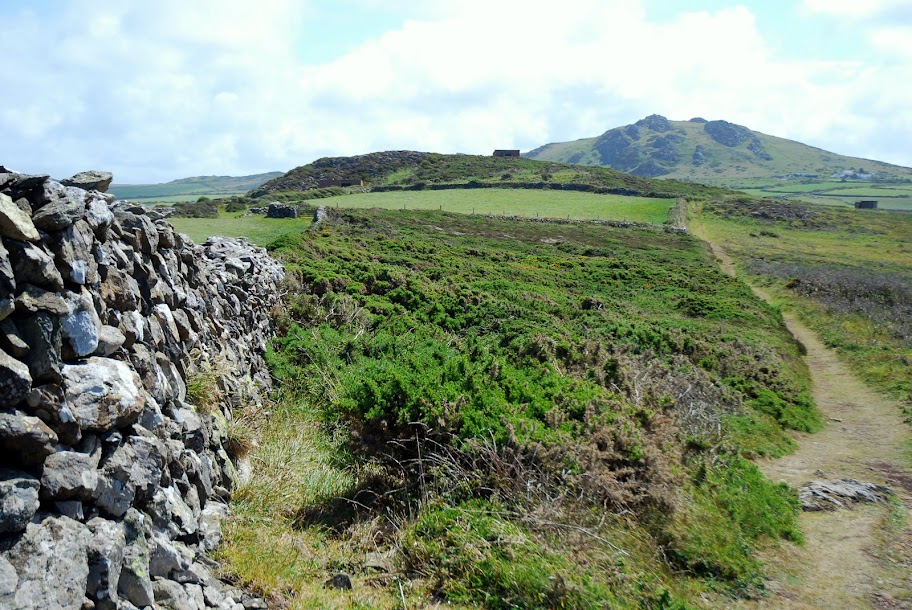 Looking back the way we had come, the brooding bulk of Garn Fawr was inescapable.  Approaching the lighthouse the coastal path passes two derelict brick buildings, abandoned Ministry of Defence installations from the Second World  War. 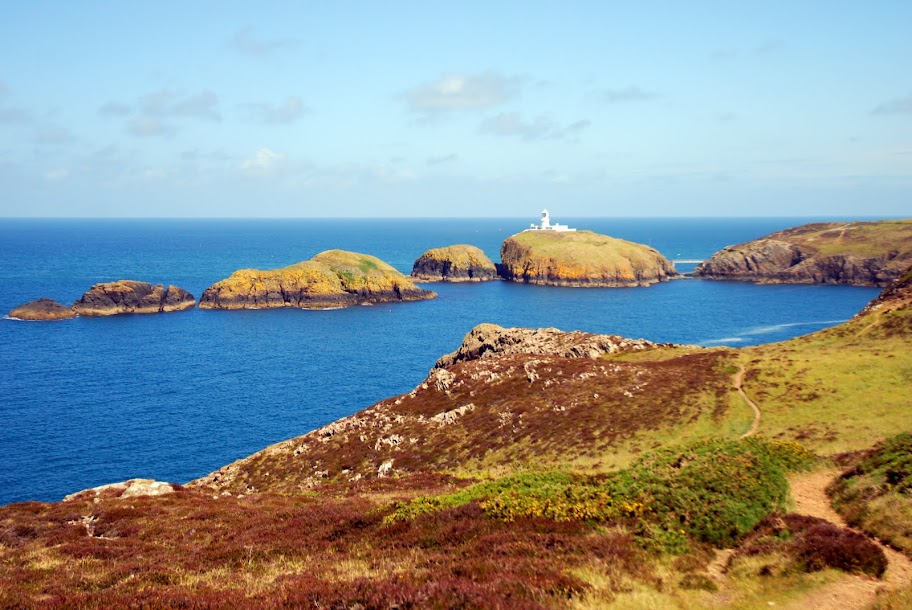 Strumble lighthouse, erected in 1908, is actually situated on the small island of Ynsmeicel, reached by a small footbridge.  It’s now fully automatic and unmanned. 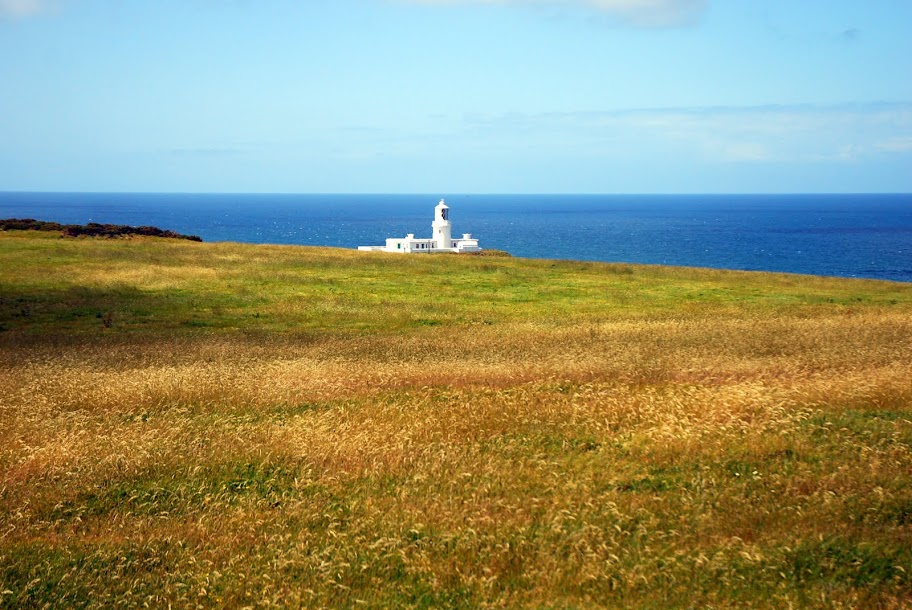 We turned inland, up the lane to Tresinwen, where we found a very neat and pretty group of buildings belonging to an organic farm. 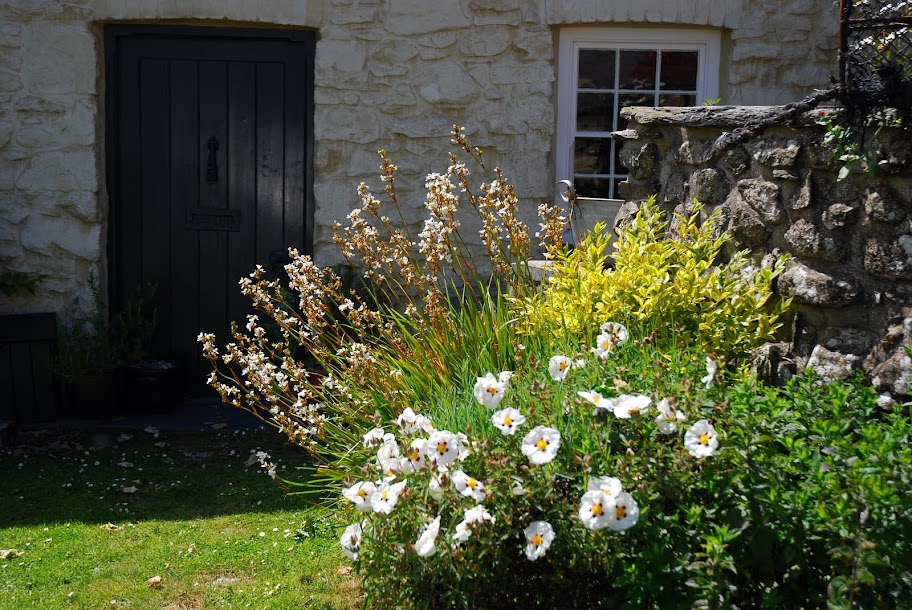 Further on , and looking like a Rachel Whiteread installation, there was this improbable-looking cottage on which every visible surface was painted brilliant white.  The blue sky, blue car and blue pot seemed to be elements of some surreal artwork. 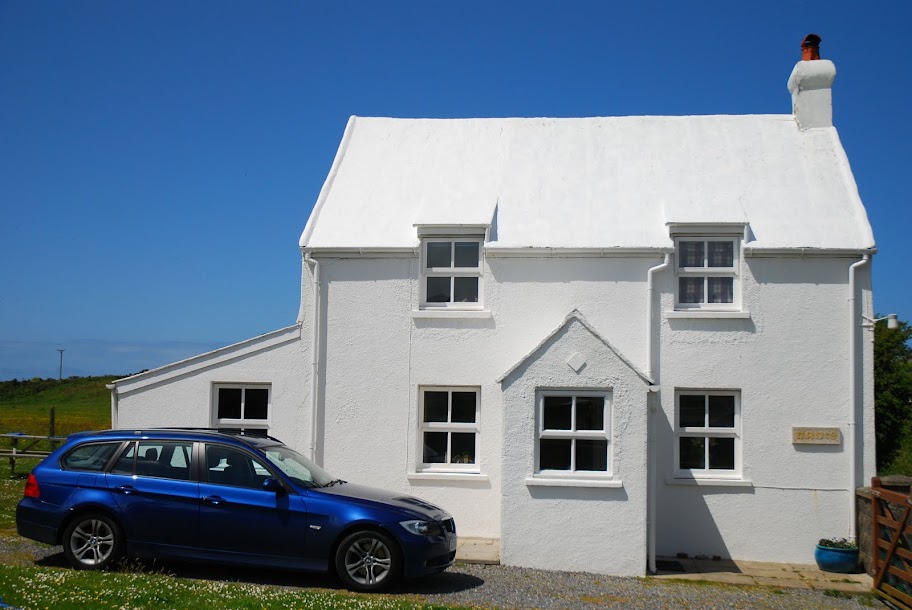 We followed the road up the shoulder of Garn Fawr and onto an old cart track which followed the ridge before eventually dropping down to the metalled road at Pwllderi.  There we ate delicious sandwiches from St Davids Food & Wine.  Overlooking the bay is a memorial stone for Dewi Emrys, whose poem ‘Pwllderi’ was written in Pembrokeshire dialect. 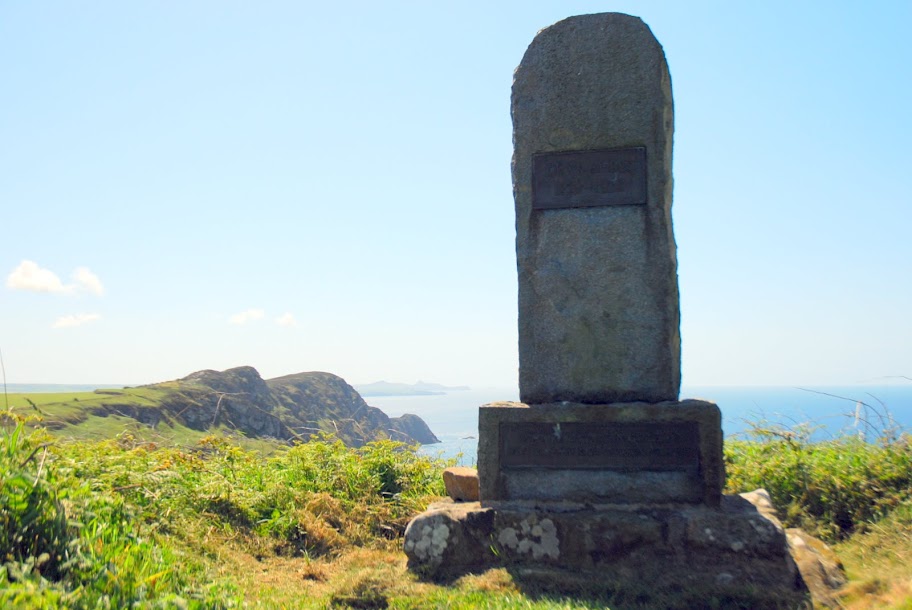 The upper plaque reads ‘Dewi Emrys 1879-1952’ and the lower one ‘a thina’r meddilie sy’n dwad ichi pan foch chi’n ishte uwchben Pwllderi’. In English,  ‘and these are the thoughts that will come to you when you sit above Pwll Deri’. 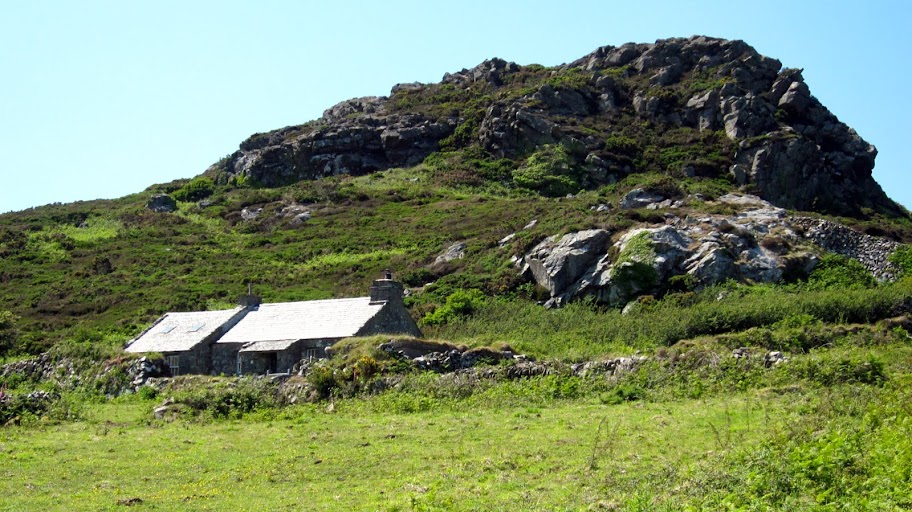 On the eastern flank of Garn Fawr, just next to the car park, stands the cottage which the artist John Piper bought in 1963.  He painted Garn Fawr many times, rather like Cezanne with Mont Ste Victoire, always finding a new way of revealing what he saw. 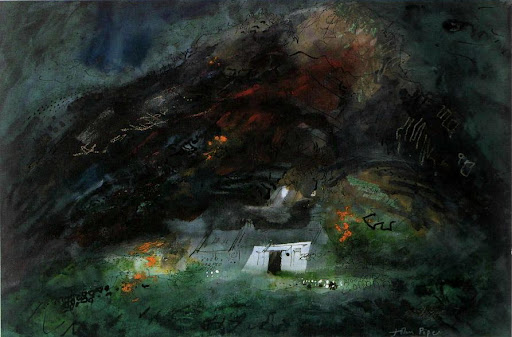 Here on the edge of Europe I stand on the edge of being.
Floating on light, isle after isle takes wing.
Burning blue are the peaks, rock that is older than thought,
And the sea burns blue—or is it the air between?—
They merge, they take one another upon them,
I have fallen through time and found the enchanted world,
Where all is beginning.The obstinate rocks
Are a fire of blue, a pulse of power, a beat
In energy, the sea dissolves,
And I too melt, am timeless, a pulse of light.
– ‘Achiltibuie’, by Nan Shepherd

One thought on “A walk around Strumble Head”