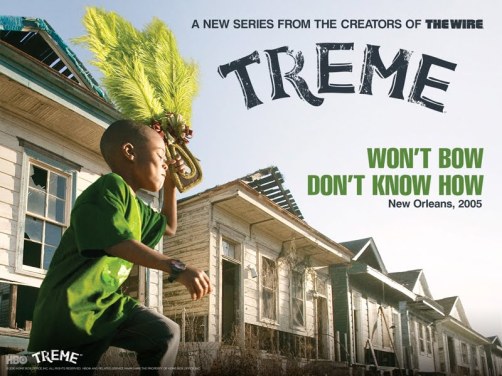 We have just finished watching the first season of Treme, the new series set in New Orleans in the months after Hurricane Katrina from David Simon and Eric Overmyer, creators of The Wire.  For the first three episodes it didn’t grab me, but then, with episodes 4 and 5, I was hooked.  By the last episode I was convinced that this is one of the very best TV dramas I have seen.

Treme doesn’t rhyme with ream; it’s pronounced truh-MAY, and it’s the name of an old New Orleans neighbourhood famous for music  – and, in some parts, for crime. In other words, it’s the kind of rough and boisterous area that represents the ‘authentic’ New Orleans.

The narrative of  this first season starts three months after Katrina and continues through to shortly after Mardi Gras the following spring. It is a tribute to New Orleans by filmmakers determined to present the city with due reverence and attention to detail. We are shown a city whose residents are proud of their home town and its culture, and dismissive and resentful of the outside world, especially the Federal government and its agencies.  In this respect I was reminded of Liverpool, especially back in the 1980s at the time of the Thatcher government, and of Alan Bleasdale’s TV drama, Boys from the Blackstuff.

What that series didn’t have, though, was music; Treme has it in bucketfuls – for music is the real hero of the series.  The narrative chronicles the efforts of an eclectic group of locals –  among them a trombone player, a chef, a civil rights lawyer, a disc jockey and a displaced Mardi Gras chief – as they struggle to repair their lives after the storm.

There are some familiar faces from The Wire: Wendell Pierce (above) is Antoine Batiste, an accomplished trombonist, while Clarke Peters plays Albert Lambreaux, the leader of a Mardi Gras Indian tribe who is trying to bring his scattered people home and revitalize the neighbourhood. Khandi Alexander, who previously worked with Simon on his earlier series, The Corner, plays Ladonna, the ex-wife of Pierce’s character and a bar owner.

All of the characters are fully-realised, convincing and compelling portrayals. At the start of the season, the character of Davis McAlary, a part-time DJ and musician and passionate admirer of New Orleans and its culture (played by Steve Zahn, above), comes across as extraordinarily irritating, but as the season progresses his character becomes more endearing and central to the story.

Unlike The Wire, Treme does not attempt to anatomise the workings of the city’s institutions (there are no leading characters in City Hall, politics or the police force), but we do have Creighton and Toni Bernette, who between them present a perspective on the political and social issues in the wake of Katrina.  Creighton Bernette (played by the excellent John Goodman, above) teaches English at Tulane University; his wife Toni (Melissa Leo, also excellent, above left) is a civil rights lawyer. Creighton has spent the last several years failing to complete a novel about the Great Mississippi Flood of 1927. After Katrina he hits YouTube to blast the rest of the uncaring United States with a series of quite wonderful video rants.  His character is based on the real-life New Orleans blogger, Ashley Morris. This is a taste of his style, adopted by John Goodman in Treme:

Remember that speech? You promised to rebuild. Quit stalling, bitch. Never again.  We’re New Fucking Orleans. We’re still here. Don’t forget us motherfuckers, or we’ll shut down the port and turn off the pipelines. You’ll freeze to death in the dark. Fuck you, motherfuckers, we’ll secede and join OPEC. Then we’ll build our own fucking levees with help from the Dutch.

Appallingly, for admirers of Goodman, his character goes the same way as Morris by the end of the season.  Here’s one of his most brilliant scenes:

Creighton’s wife Toni is a lawyer working to defend the rights of New Orleans citizens against all forms of authority.  Her ceaseless attempts to solve the mystery of what happened to one person during and after the hurricane, forms a powerful political storyline. Perhaps the most devastating scene of the series occurs when Toni’s search leads her to a temporary government morgue situated in a park of refrigerated containers.  The camera pulls back and pans across the vast area where containers are lined up, row upon row, all holding unclaimed and unidentified bodies.

But it’s the music that is the real star of this show.  Every episode is drenched in the finest New Orleans music, from the excellent theme tune sung by New Orleans vocalist John Boutté on in.  The cast includes musicians from the city, and there are walk-on appearances by a host of famous faces, including Dr John, Cassandra Wilson, Kermit Ruffins, Irma Thomas, Allen Toussaint, Rebirth Brass Band, Elvis Costello and Steve Earle, to name but a few. The production successfully captures the authentic atmosphere of music played joyously in the streets or in the clubs.

‘Treme is the place where New Orleans gave birth to itself. So it’s sort of a state of mind. It felt right for the title of the piece, the show’s producer, David Simon has said. He and the cast shot many scenes in the neighbourhood and hired dozens of people with Treme roots, including the Rebirth and Treme brass bands. Former Treme resident John Boutte sings the show’s theme song.  Manic deejay and musician Davis Rogan, who has lived in Treme for more than a decade, is the model for Davis, the deejay and musician character played by Steve Zahn.  The show’s fifth episode was written by Treme resident and former Times-Picayune columnist Lolis Eric Elie, who co-produced Faubourg Treme, a documentary about the neighbourhood.

Can’t wait for season two. This was the finale to the first season: