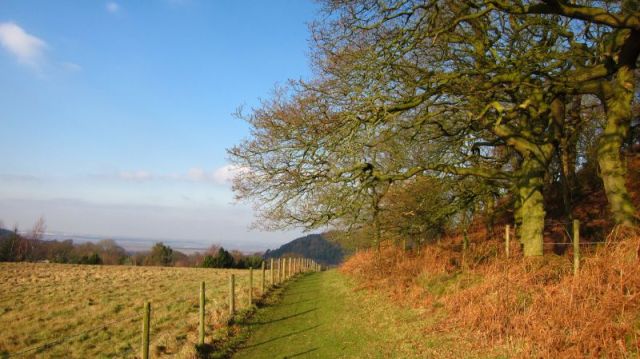 I see somebody marchin’ , marchin’ down the street
It’s time we started prayin’ to have a better day
– George Perkins, ‘Cryin’ In The Streets’

We pushed on further down the Sandstone Trail on a bitterly cold, but beautiful and sunny afternoon.  We picked up the trail where we had left it a week ago at Snidley Moor.  Here, on rising ground with distant views of the Mersey estuary,  the trail follows the edge of the woodland on Alvanley Cliff. 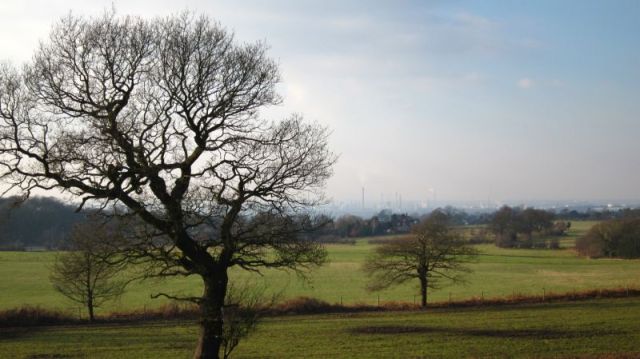 There were once sandstone quarries here that produced the stone used in many local buildings.  One quarry produced particularly fine sandstone that was used to rebuild Chester Castle.

Years ago, when we first walked the trail, as we passed this way we would see a typical timber-framed Cheshire house in the process of being being restored.  This was Austerson Old Hall (below), and it had actually been moved across the county to be re-sited here, looking west towards the Welsh border.  The timber framed hall is a Grade II* listed building and was brought 27 miles from Austerson, a hamlet near Nantwich, and reassembled here between 1974 and 1986 by a local architect. 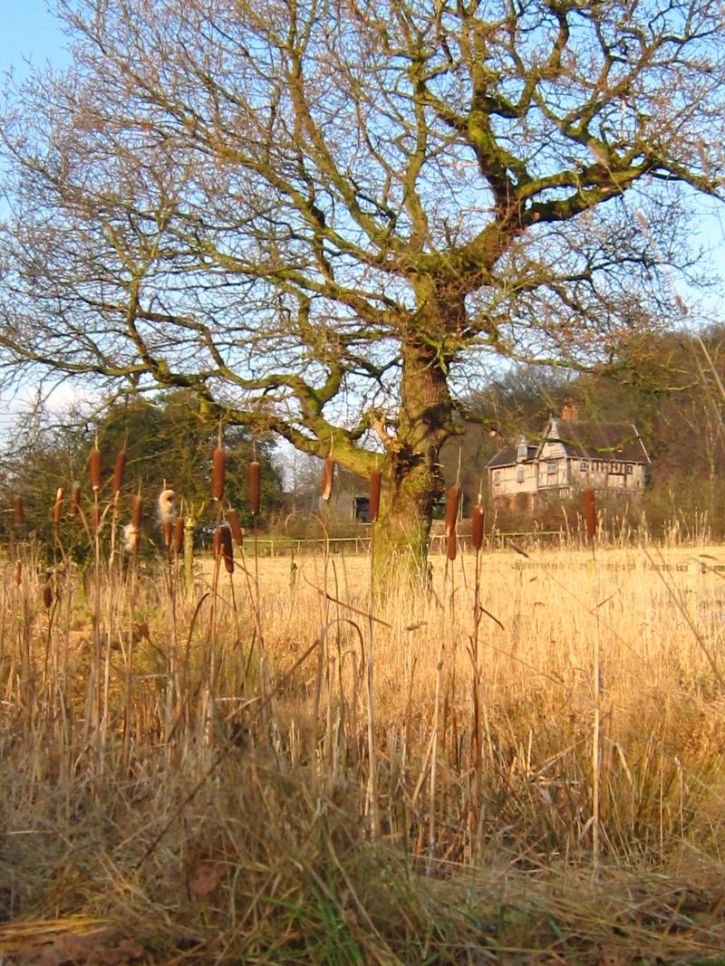 At the southern end of Alvanley Cliff the trail is forced to detour onto the busy road past Manley village school on one side of the road and several extensive properties on the other.  Thinking of the proposed sell-off of Forestry Commission woodland, I mused that this is what the total triumph of private ownership would be like – walking forever on the roads, with 4X4s roaring past.

Well, the fields belong to the farmers
And the forests belong to the king
These days our pleasures are all behind fences
We have to pay for everything
– Billy Bragg, ‘The Beach Is Free’

The trail follows the road under the continuation of the sandstone ridge, here called Simmonds Hill, before turning off across the fields towards Manley common (above). In 1860, Manley was described as ‘a wild bleak and scattered township’.  Today, it pleasant, attractive and comfortably Cheshire.  Potatoes are traditionally grown in this area, handy for local markets, and we would often buy a sack of Cheshire reds from the farm shop in the village.

In 1870-72, John Wilson’s Imperial Gazetteer of England and Wales described Manley as having had, in 1851, a population of 395, which had fallen by 1861 to 294. ‘The decrease of population was caused by discontinuance of employment in stone quarries’. 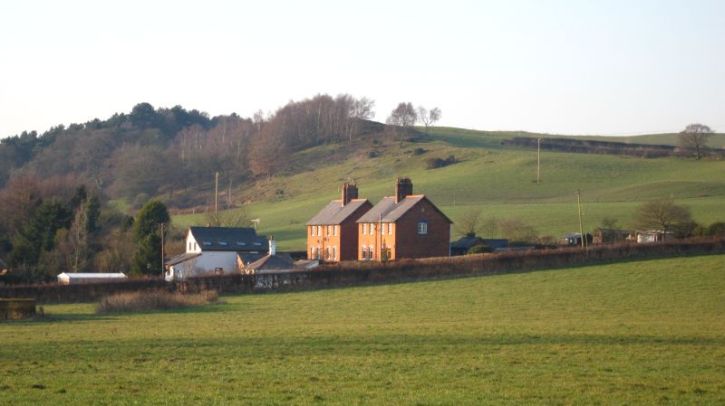 Leaving the common,surrounded by early 19th century cottages, the path heads due east towards the looming bulk of the Delamere Forest conifers.  Looking back, there are fine views of the sandstone ridge at Simmonds Hill.

We entered the forest, a mere vestige of the ancient hunting forest of Mara and Mondrum, which at the time of the Norman Conquest extended from Frodsham to Nantwich.  It’s now managed by the Forestry Commission, and is one of the areas of woodland threatened by the government’s plans to sell off publicly owned woodland.  Delamere Forest is an area of mixed woodland, encompassing meres, bogs and mosses. There are several way-marked footpaths and cycle tracks, and yesterday it was busy with walkers and cyclists of all ages.

Returning the way we had come, I thought about all those who, as we walked the woodland and fields of the trail, were marching this weekend.  In Grizedale Forest in the Lake District, over a thousand turned out to protest the plans for the privatisation of the forest amid fears that it could reduce access, damage wildlife and lead to afforestation.  In Manchester and London, thousands marched again to protest against the increase in university tuition fees and the abolition of grants to support further education, while in Liverpool trade unionists protested against the massive budget cuts forced on the City Council by the government. 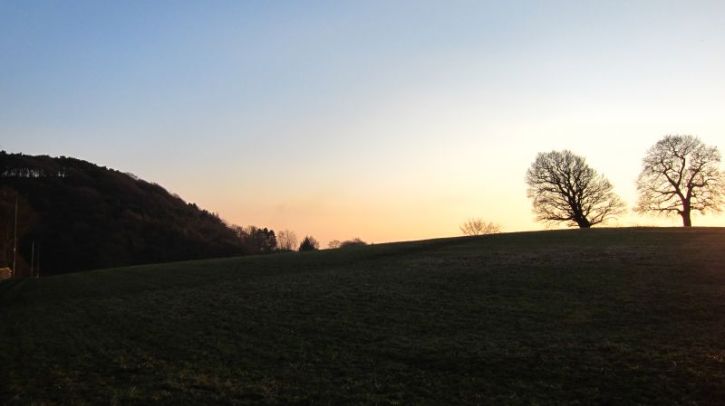 But most of all I thought of the people on the streets of Cairo and Egypt’s other major cities, yearning for freedoms denied.  The flame that has spread to Egypt began burning in Tunisia a few weeks ago.  There, an inspiration for the movement has been the poetry of Abou-Al-kacem El-chebbi, the  Tunisian poet (1909-1934) and, in particular, this verse, ‘To the Tyrants of the World’:

Imperious despot, insolent in strife,
Lover of ruin, enemy of life!
You mock the anguish of an impotent land
Whose people’s blood has stained your tyrant hand,
And desecrate the magic of this earth,
sowing your thorns, to bring despair to birth,

Patience! Let not the Spring delude you now,
The morning light, the skies’ unclouded brow;
Fear gathers in the broad horizon’s murk
Where winds are rising, and deep thunders lurk;
When the weak weeps, receive him not with scorn—
Who soweth thorns, shall not his flesh be torn?

Wait! Where you thought to reap the lives of men,
The flowers of hope, never to bloom again,
Where you have soaked the furrows’ heart with blood,
Drenched them with tears, until they overflowed,
A gale of flame shall suddenly consume,
A bloody torrent sweep you to your doom!
– translated by AJ Arberry in Modern Arabic Poetry: An Anthology with Modern English Verse Translations

Another of  El-chebbi’s verses is ‘If the People Wanted Life One Day’, here translated by Elliott Colla from the Arabic Literature in English blog:

If, one day, a people desires to live, then fate will answer their call.
And their night will then begin to fade, and their chains break and fall.
For he who is not embraced by a passion for life will dissipate into thin air,
At least that is what all creation has told me, and what its hidden spirits declare… 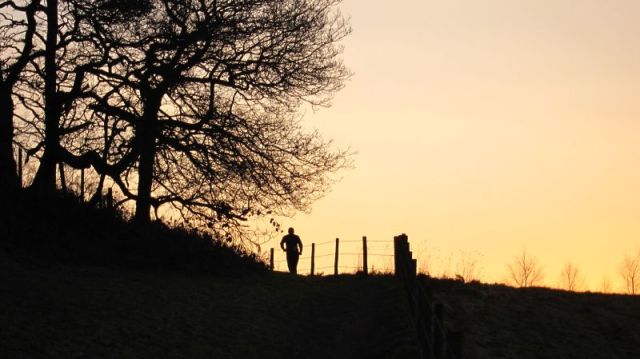 This may be a good moment to recall Shelley’s poem on the hubris of leaders and the arrogance and transience of power, ‘Ozymandias’:

I met a traveller from an antique land
Who said: Two vast and trunkless legs of stone
Stand in the desert. Near them, on the sand,
Half sunk, a shattered visage lies, whose frown
And wrinkled lip, and sneer of cold command
Tell that its sculptor well those passions read
Which yet survive, stamped on these lifeless things,
The hand that mocked them and the heart that fed.
And on the pedestal these words appear:
“My name is Ozymandias, king of kings:
Look on my works, ye Mighty, and despair!”
Nothing beside remains. Round the decay
Of that colossal wreck, boundless and bare
The lone and level sands stretch far away

The poem caused outrage in some quarters when it was published in 1818 because it was seen as a direct attack on the British Empire.

I was tickled to return home and see on the news that one of the banners carried by student protesters in Manchester read: ‘Walk like an Egyptian’.

One thought on “Walking and marching”