A circular walk around Crackington Haven

At the start of a short break in the West Country, we followed a circular walk around Crackington Haven, the small cove situated between Bude and Boscastle on the north Cornwall coast.  We arrived around 4 pm, as patchy sunshine gave way to more extensive sun, though with a fair breeze blowing.

Crackington Haven is set at the head of a pretty valley which formed the latter part of our walk.  On either side are spectacular cliffs. To the south is High Cliff which, at 735 feet, is Cornwall’s highest cliff. It overlooks Strangles Beach on which Thomas Hardy used to walk with his first wife, Emma. To the north is the cliff called Penkenna.  We stayed at the pub on the beach – the Coombe Barton Inn. 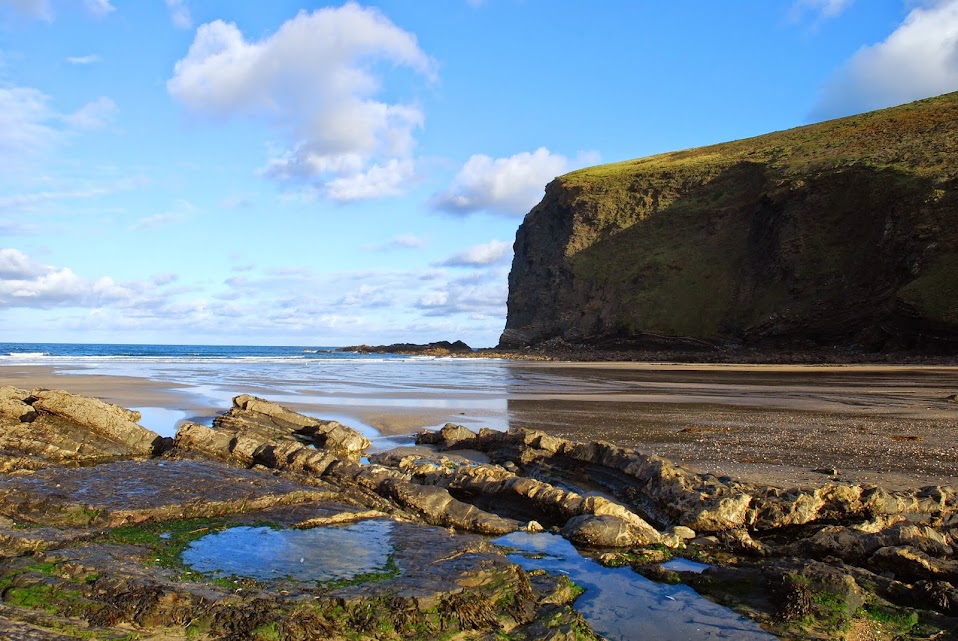 The name Crackington is a hybrid of Cornish and English. Crak means ‘sandstone’ in Cornish and mutha tun means river mouth farm in English.  Crackington Haven was originally a typical North Cornish port, importing limestone, coal and slate.  Seaweed was also gathered on the beach to use as fertiliser. Plans in the 19th century to expand the port and construct a rail link to Launceston were abandoned and so, today, Crackington Haven remains unspoilt by modern development. 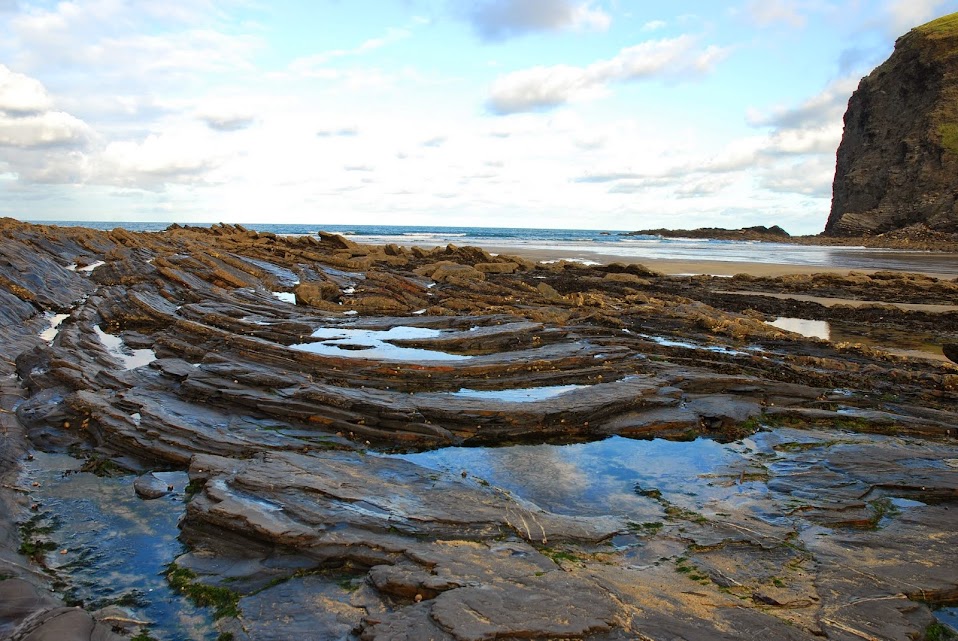 At high tide, the beach is a mass of quartz-veined pebbles and large boulders but, at low tide, it reveals an expanse of sand and many rock pools. The Carboniferous rocks, which form the cove, are of great geological importance and the type has been assigned the name ‘the Crackington Formation’. For this reason, this area has also been designated as a Site of Scientific Interest (SSI). The cliffs are home to kestrels and buzzards, and, if you’re lucky (which we weren’t this time), seals or dolphins can be seen. 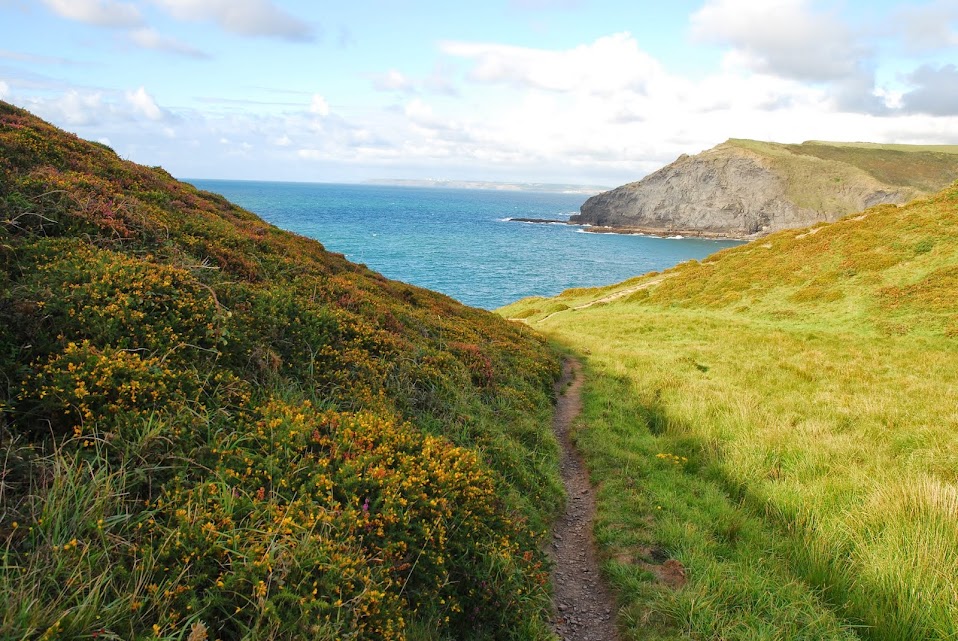 From the beach at Crackington we followed the Coast Path west towards Cambeak.  As we made the steep ascent from the cove, a lovely view of the bay, popular for surfing, opened up. The path was surprisingly rich in wildflowers, given that it was mid-September, with gorse, heather, red campion in bloom, plus a great many blackberries and sloes. 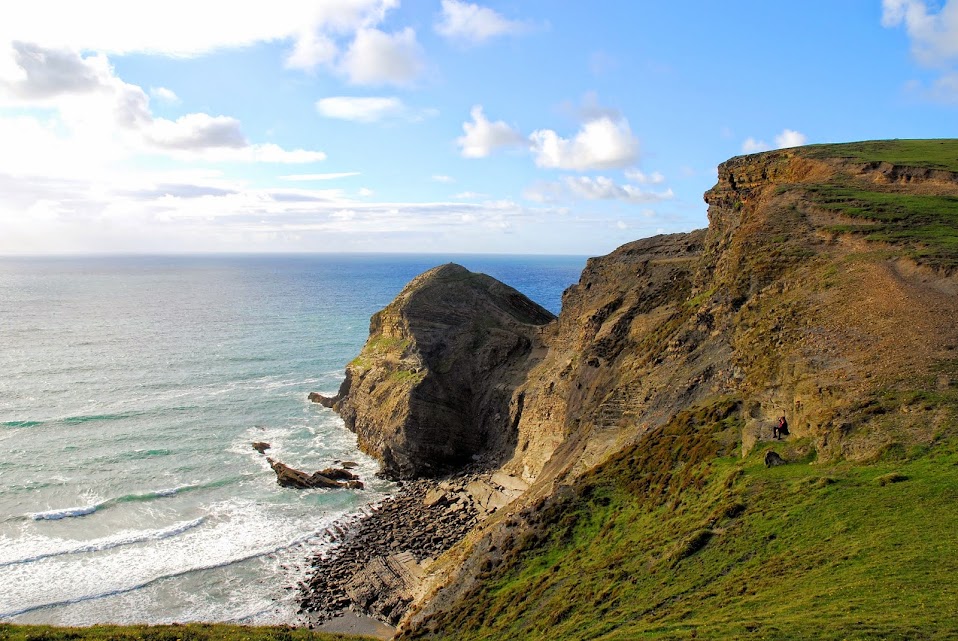 When we reached Cambeak there were spectacular views up and down the coast. It was a clear day and we could see across to Hartland Point and out to Lundy Island. 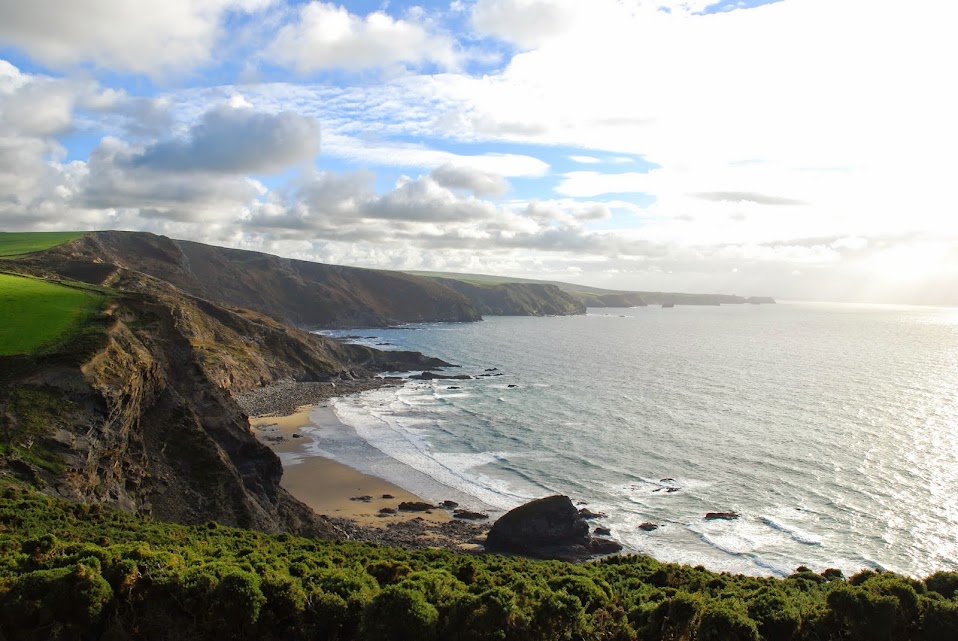 We continued along the Coast Path following the cliff top above Strangles beach. The geology between Cambeak and Strangles beach is fantastic. There are many places where we saw how the Crackington Formation, a fractured shale,  had been shaped into incredibly twisted and contorted forms. On the sheared-off cliff faces we could see the great swirls and folds of this sedimentary rock that was ‘metamorphosised’ by volcanic heat and contorted by the geological storms of millions of years ago. The triangular rock at the eastern end of Strangles is called Samphire Rock – a strange coincidence, as it was only a few days ago that we ate samphire for the first time when we were entertained by our friends on Egremont Promenade.  Absolutely delicious, served in a buttery garlic sauce. 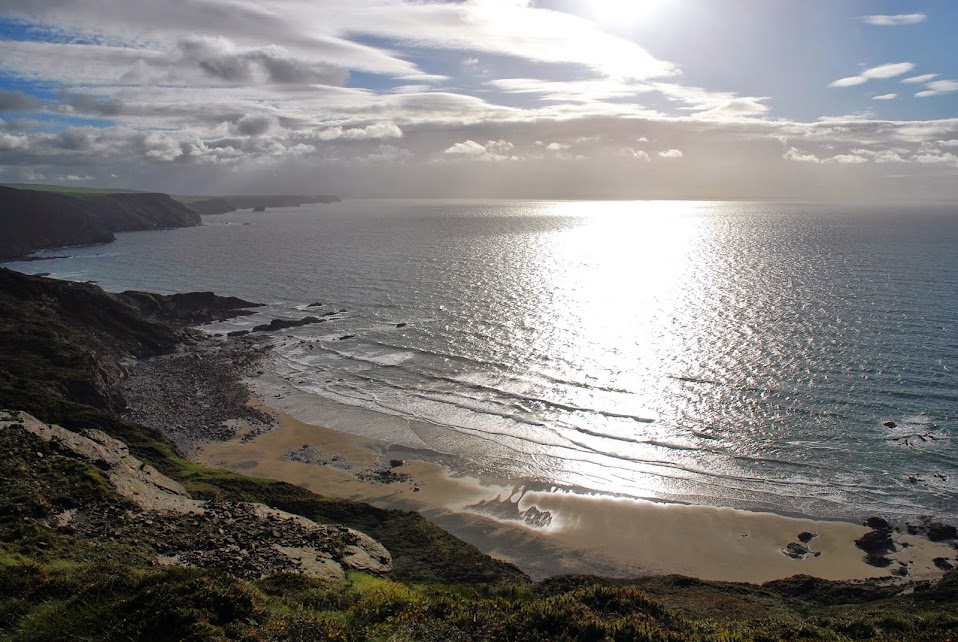 We followed the path until we were above the southern end of Strangles beach then turned inland, following a path signed to Trevigue. We followed this to the road, then turned left to Trevigue farm. This 800 acre farm at Trevigue, which now provides holiday accommodation, dates back to before the Norman Conquest. 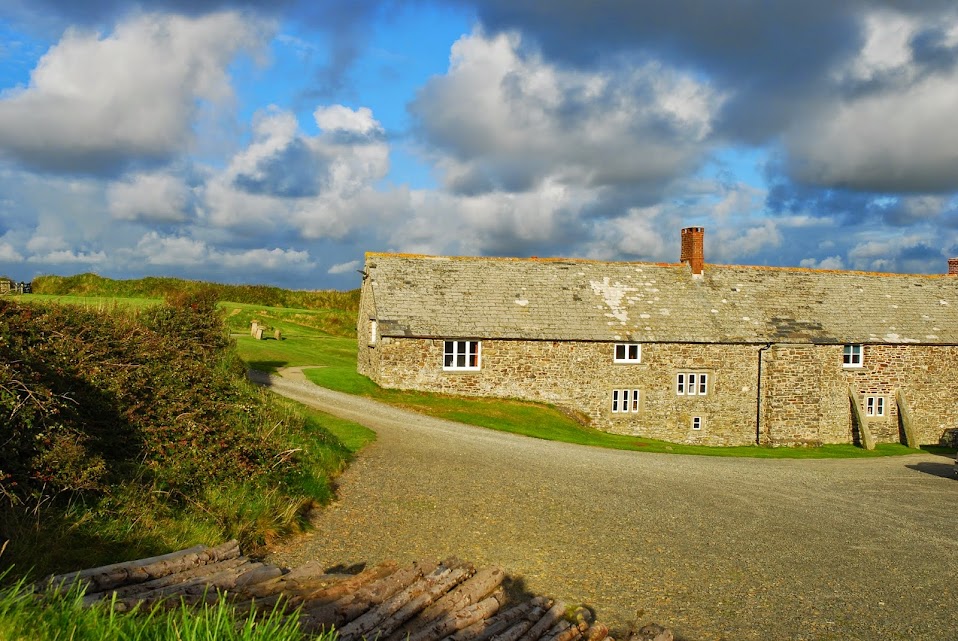 Here a track leads out across the fields, down a steep hillside and into the woods.  The views here, of rolling hills brilliantly lit in the early evening sunlight, was a real contrast with the wild coastline we had just left. 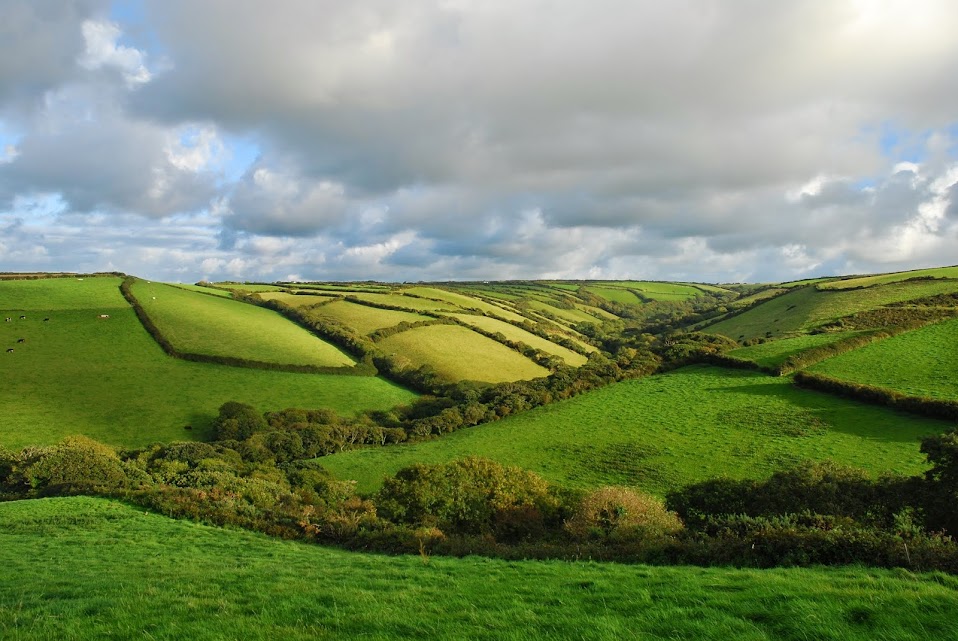 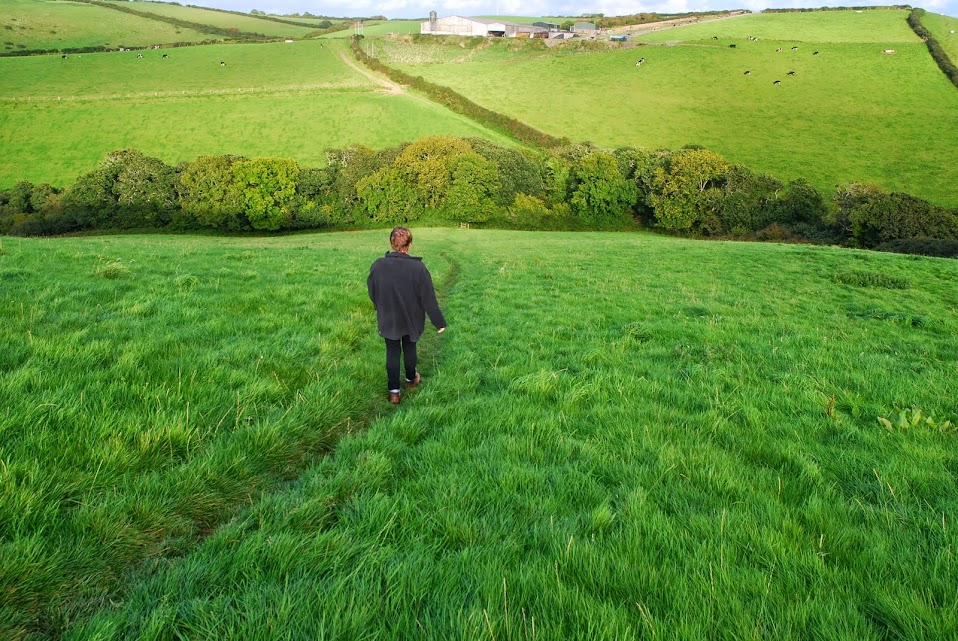 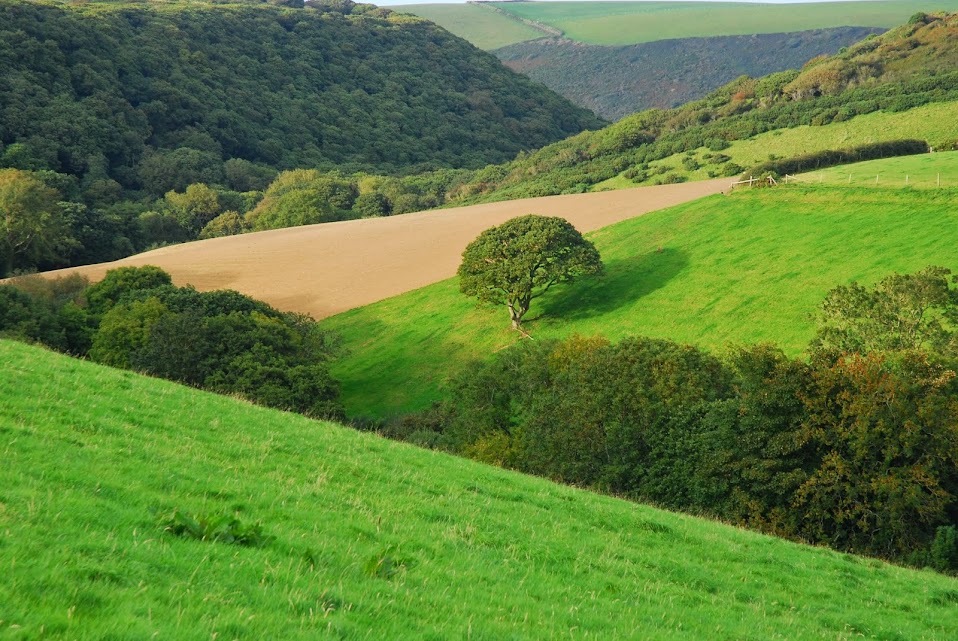 At the bottom of the hill the path follows a valley through East Wood. This is ancient woodland, one of the oldest natural woods surviving in the UK, consisting mainly of oak, holly, ash and hazel. The path meanders down the valley, alongside one of the streams that reach the sea at  Crackington Haven. 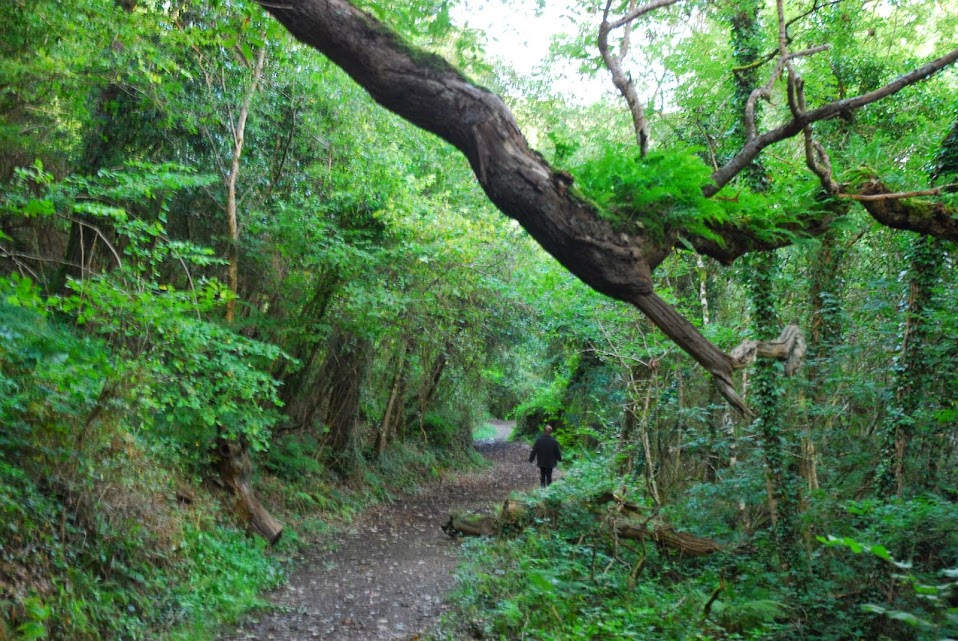 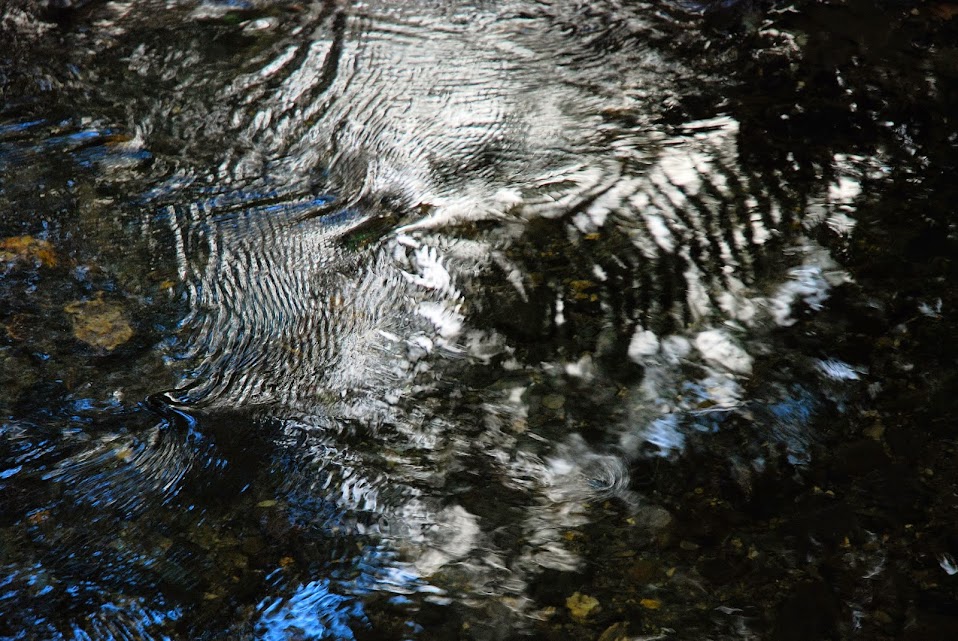 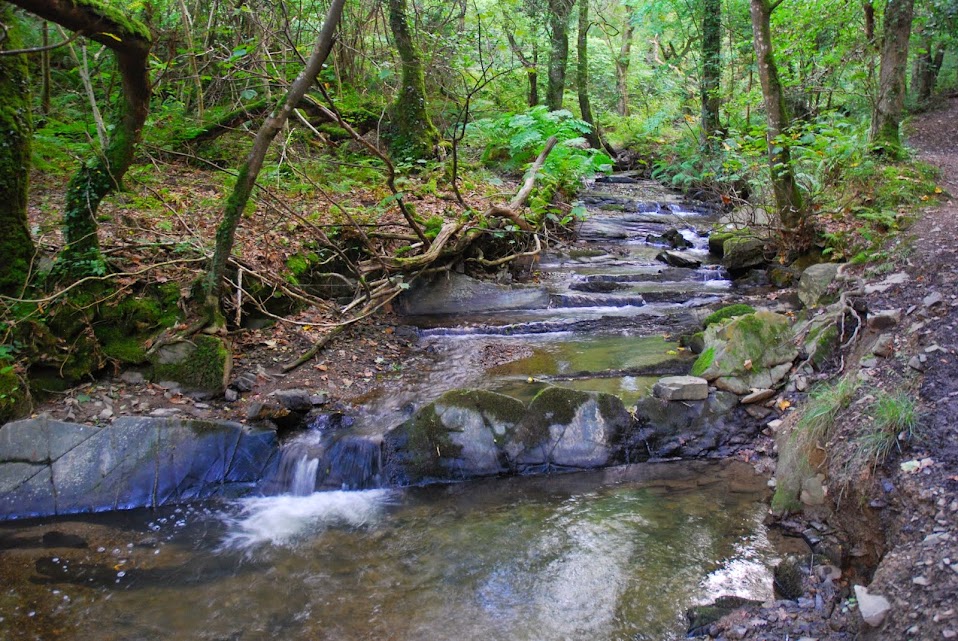 Eventually, after crossing two footbridges, the track brought us out on the road leading back down to Crackington Haven. We arrived back at the cove around 7 pm, just as the sun was setting. 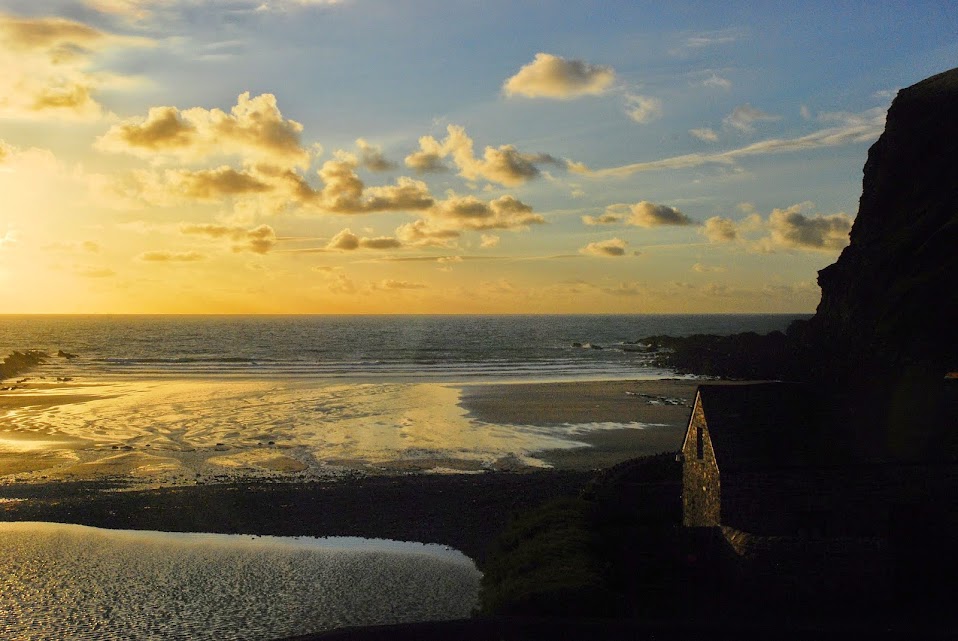 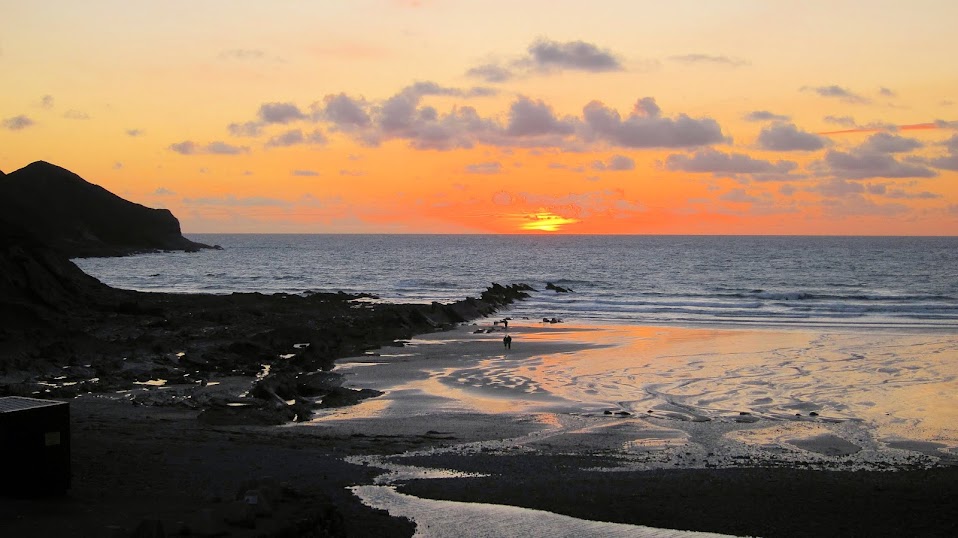 In 2004, Crackington was one of several places badly damaged in the Boscastle flood. Many properties had to be rebuilt and I noted a sign that recorded that the bridge over the stream had been restored by Cornwall County Council after the flood.