Heritage Open Days have rolled round once again.  The English Heritage website explains the purpose of this annual event:

Heritage Open Days celebrates England’s fantastic architecture and culture by offering free access to properties that are usually closed to the public or normally charge for admission. Every year on four days in September, buildings of every age, style and function throw open their doors, ranging from castles to factories, town halls to tithe barns, parish churches to Buddhist temples. It is a once-a-year chance to discover hidden architectural treasures and enjoy a wide range of tours, events and activities which bring to life local history and culture.

Last year I took a peek at the Ancient Chapel of Toxteth and the Unitarian Church on Ullet Road.  My first visit this year was to The Greek Orthodox Church of St Nicholas on Princes Road. It was built 1870 in the Byzantine style and is a Grade II Listed building.  It is one of only four purpose-built Greek Orthodox churches in the UK. The next day I visited  Walton Old Grammar School, one of Liverpool’s oldest surviving buildings.

This was the second purpose built Greek Orthodox Church in England. Before 1870, the Greek community had no public place of worship, assembling for services in a house in Sandon terrace.  George Michael Papayannis was the founder of the Papayanni Steamship Company, a subsidiary of  the Liverpool-based Ellerman Lines which became one of the largest shipping firms in the world. He was the first President of the Liverpool Greek Community and in 1867 organised a loan to fund the construction of the church, which was completed in 1870 and dedicated to Saint Nicholas, the patron saint of families, children and seamen.

The exterior is extremely ornate, featuring arches within arches, done in alternating bands of white stone and red brick. There is a row of three domes on the portico, and a fourth dome over the nave, all raised on drums. The interior, however, with white marble columns and Byzantine capitals, is surprisingly plain compared with the exterior. 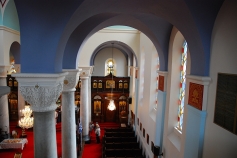 The styling of the church draws heavily on the Byzantine architecture which is typical of the domed eastern Greek Orthodox churches around the world, with the architect adopting a design similar to that of St Theodore’s church in Constantinople. 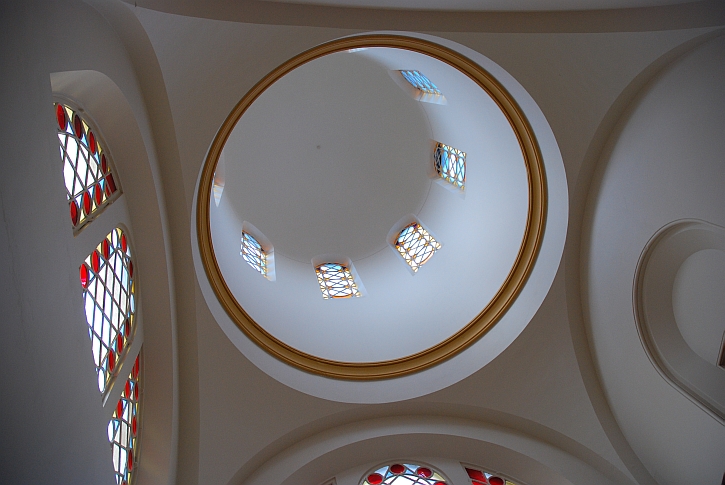 There has been a Greek Orthodox community in Liverpool for over 180 years. Refugees from Chios, the island just off the coast of Turkey, who fled after the massacre of Greeks by Turks in 1821, were among the original Greeks to settle in Liverpool.  By the late 19th century, among foreign merchants, the Greeks occupied a prominent and important place as gentlemen of position, wealth and intelligence. Five shipping lines exported to Greece.

Goods destined for Greece passed through the Liverpool docks, where many Greeks worked as seamen and dockers.  On their return, the ships brought cargoes of fruit, oil, vegetables and wine from Greece and the Middle East.

Today there are estimated to be 2,500 Greek Cypriots in the Merseyside area.  Their impact on the restaurant scene in Liverpool has been considerable.  For students in the city in the late 1960s, the Kebab House, established in 1968, was a place to eat wonderful food cheaply. It began life in a family house on Windsor Street, before moving to much larger premises in Hardman Street a decade later.

Next day I visited  Walton Old Grammar School, one of Liverpool’s oldest surviving buildings which I must have passed hundreds of times without knowing it was there.  It’s tucked away under trees at the corner of Walton Parish churchyard, next to the Black Horse pub, where busy County Road sweeps round a final bend before meeting the roundabout and  Rice Lane.

This was the heart of the old township of  Walton-on-the-Hill under whose auspices Liverpool was administered until it became an independent parish in 1699.  Walton was an Anglo-Saxon settlement (the name derives from weald+tun and means ‘walled settlement’).  It is mentioned in the Domesday Book when a church was recorded on this site, noted as being made of wattle and daub.  The first stone church was not built until 1362 and it has been rebuilt many times over the centuries.  This was once the parish church, of not only Walton, but of the whole of the town Liverpool.

The present school building, constructed in the local red sandstone, dates from 1613 and replaces an earlier building of 1548. At the beginning of the 17th century, the population of Liverpool numbered barely 2000, but was beginning to build on its potential as a shipping port, with civic efforts producing the first Town Hall and this, the first grammar school of the town, founded by John Crosse of Crosse Hall which stood where the Municipal Buildings are now.  He was a member of the wealthy and influential Liverpool family, after whom Crosshall Street is named.

The provisions of John Crosse’s will were sufficient to finance a chantry priest who would also keep the grammar school. The dissolution of the monasteries in the 1540s disrupted these arrangements, but during the reign of Edward VI it was refounded with a new charter.  The building remained a schoolhouse until the 1820s, by which time it was deemed to small to serve its purpose.

The school must have contributed to rising standards of literacy amongst the merchants of the town. In Liverpool 800, edited by John Belchem, it is suggested that though the majority of the town’s merchants could sign their names by the end of the 16th century, most may still have been ‘operating at the margins of literacy’.

The grammar school that I attended in the early 1960s – King’s School Macclesfield, then a direct-grant grammar – had a similar history, established by John Percyvale, a local man who had made a fortune in London and who endowed a chantry school in his home town, where there were ‘copyous plenty of Children … and vertue right fewe Techers and scolemaisters’, and the scholars would pray daily for his soul. The school was established in 1502, also survived the dissolution, and was re-established in 1552 as ‘the free Grammar School of King Edward VI’.