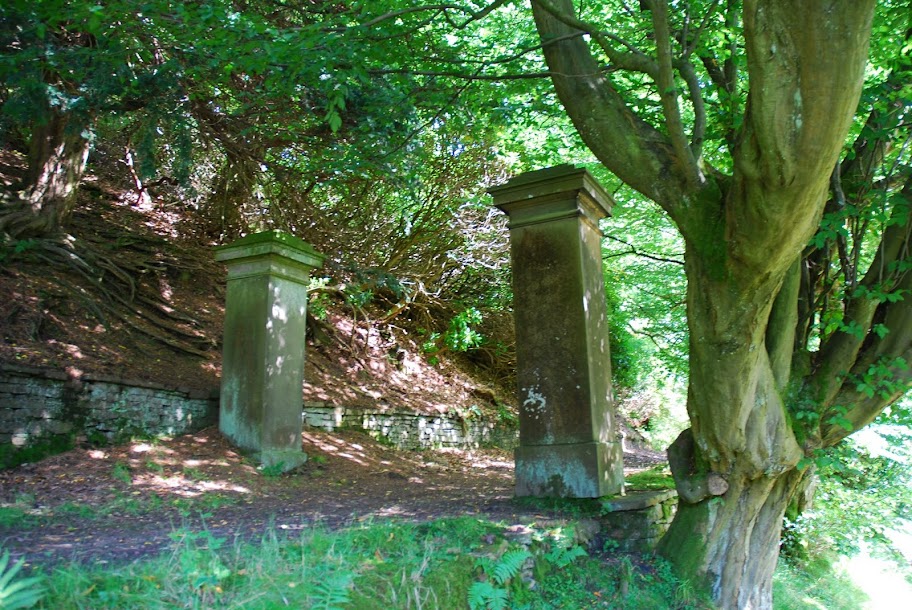 The day began with an unusual encounter in Sefton Park.  On the opposite bank of the Jordan I noticed a strange bird, sleeping, with head tucked under wing.  I walked round to take a closer look, and the dog got to within a couple of feet before the bird woke with a start and fluttered into the stream.  It was an immature cormorant – not that unusual in the park, I later discovered.  The RSPB site reports they are sometimes seen here, and there is a photo of one one on the lake posted on Flickr.

We are enjoying a belated spell of warm, fine weather, with hardly a cloud in the sky.  So I decided to make a return visit to the Goyt valley to explore the area around the ruins of Errwood Hall.  The hall was built in the 1830s by the  wealthy Grimshawe family from Manchester and was occupied by descendants of the family until 1930, when it was demolished during the construction of the reservoir. 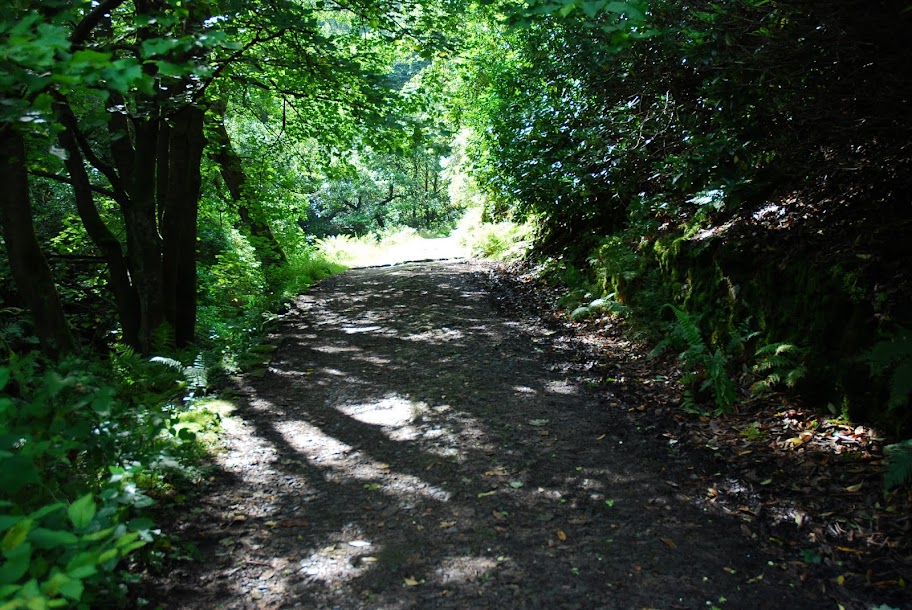 I approached the ruins walking up from the car park by Errwood reservoir along the carriage way that winds through a landscape of  azaleas, rhododendrons and exotic trees – from specimens planted by the Grimshawes –  that you don’t expect to encounter on the Derbyshire moors. The drive follows the course of a ravine formed by a stream that flows down from Shining Tor through Shooter’s Clough.  Eventually I reached the imposing gateposts (top) that still remain. 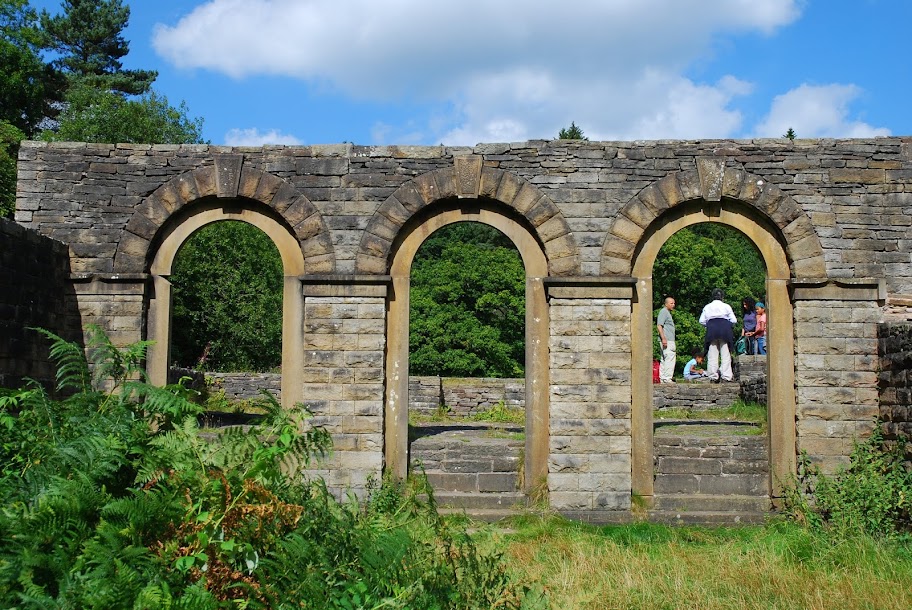 Around the final bend in the drive the ruins of the hall come into view. Little survives today except part of the stone ground floor, a few steps, some Norman arches.  The Hall was a turreted structure of two wings in millstone grit sandstone with some Italianate and Norman styling.  There was a central tower and a chapel, which formed the upper storey of an extension to the northern end. 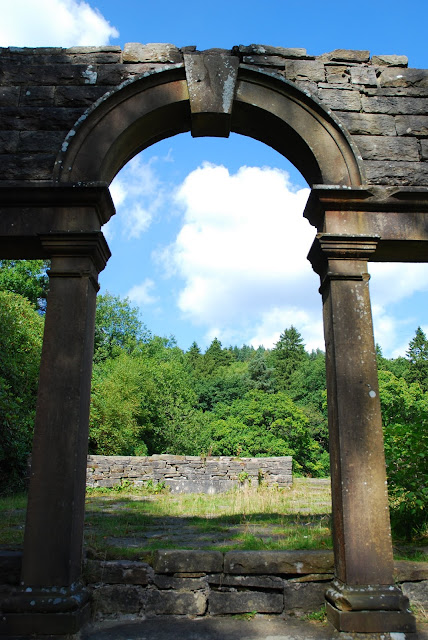 A French window opened onto a terraced garden at the southern end, with wide steps leading up to the main entrance.  Over the front door was the Grimshawe crest – a dragon and a small coat of arms – which can still be seen (below, and in situ in the pre-1WW photos below). 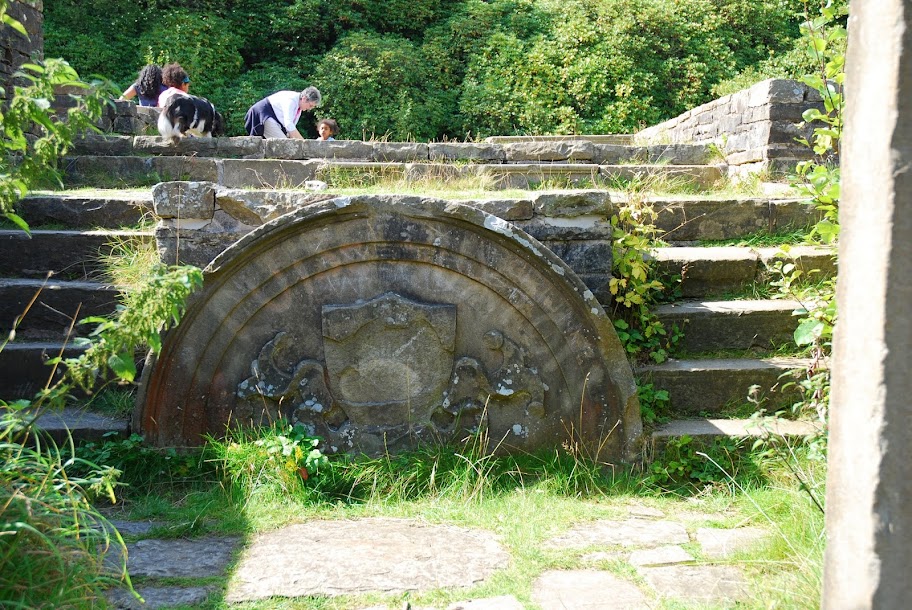 ‘The past is a foreign country: they do things differently there.’
– LP Hartley, The Go-Between

There’s a powerful sense here of a lost way of life, built upon great wealth that could afford to employ the manual labour required to create and maintain this property far from the city. Samuel Grimshawe (1811-1883) was the rich Manchester merchant  who, in 1835,  purchased 2,000 acres of land, including the Cat and Fiddle pub, from John Jodrell of Yeardsley Hall at Whaley Bridge and had the hall built. The hall became the centre of a thriving estate, comprising several farms, kitchen gardens, a private swimming pool, tennis courts, a school, a private coal mine and the hamlet of Goyt’s Bridge that eventually disappeared under the waters of the reservoir.  In time, the Errwood estate was virtually self-supporting

The Grimshawe family enjoyed a life of ease here, with an extensive retinue of servants and groundsmen, library and much foreign travel in the family yacht, sometimes bringing back foreign servants to work at Errwood, as well as new plant specimens for the grounds.  In the 1841 census Samuel Grimshawe gave his profession as ‘land proprietor’ – he was buying property in Manchester and its suburbs at this time, and there are places in Levenshulme which reveal the Grimshawe connection, such as Errwood Road.

A description of the Hall, written in 1883, gives a flavour of the opulent lifestyle enjoyed by the family:

Errwood Hall is a modernised building of dressed stone, with rooms of considerable size and number. In the centre there is a noble tower, underneath which is the main entrance to the elegant structure, reached from the ground by a fine flight of steps… On the entrance arch to the terraces are the crest and monogram of the family inhabiting the hall, namely Samuel Grimshawe, Esq., J.P., a venerable gentleman, who, prior to his death, made this abode his country seat. The terraces rise in easy ascents to the beautiful romantic walks on the high hill, situated upon a declivity of which the entire buildings rest, securely sheltered from the fierce winds which sweep over the heights around.

Internally this mansion is most magnificently furnished, not only with most of the modern luxuries which wealth can command, but also with many rare and costly works of art, the production of foreign continental lands, more especially Italy…

The downstairs library is well worthy of notice, containing as it does some thousands of volumes of the rarest and most costly productions of the press. The roof is beautifully coloured and adorned with a splendid floral pattern in bright tints, with flowered corners, and a neat border to match ; there is also emblazoned on the ceiling in panel fashion the arms and crest of the family, which is a splendid piece of decorative art…

By 1851, when the elder Samuel Grimshawe died at the age of 83, the Grimshawe family were well established at the Hall and it was at this time that the family converted to Catholicism and had the upper storey of the northern extension of the Hall made into a private Catholic Chapel. Samuel’s grandchildren were the last members of the family to live in the Hall, which was then used as a youth hostel for a few years until it was demolished in connection with the construction of the reservoir in 1934. 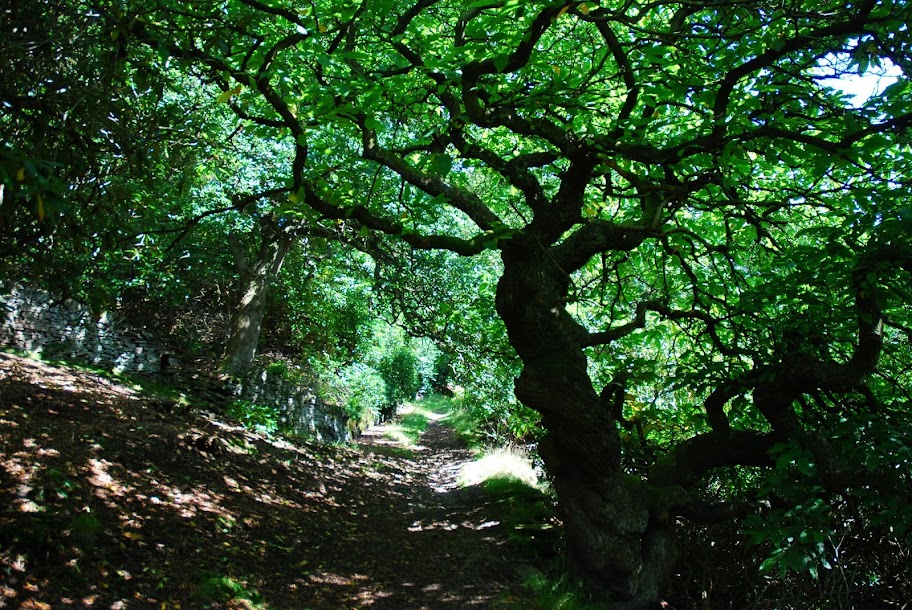 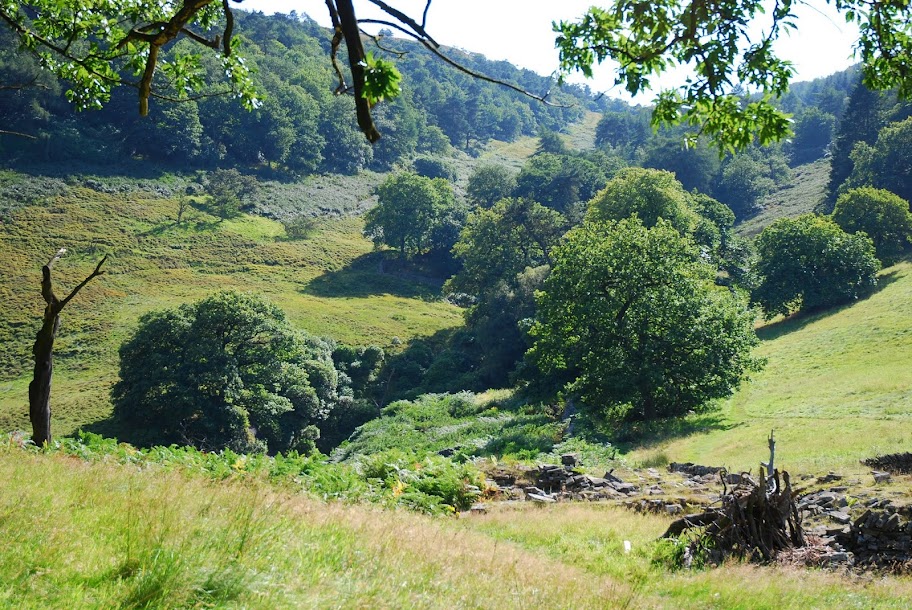 After exploring the ruins of the Hall, I set off up the valley. In its heyday, a staff of twenty were employed in the house and gardens and not far away, at Castedge, are the ruins of the servants’ cottages (above), the laundry, greenhouses and the vegetable garden. The Hall also had its own coal mine nearby in the valley, which was worked until 1929. 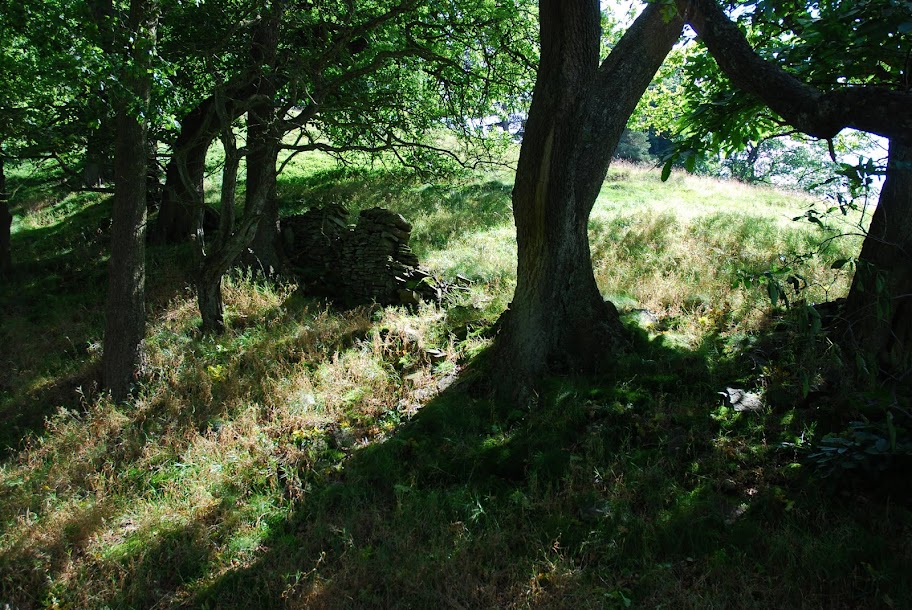 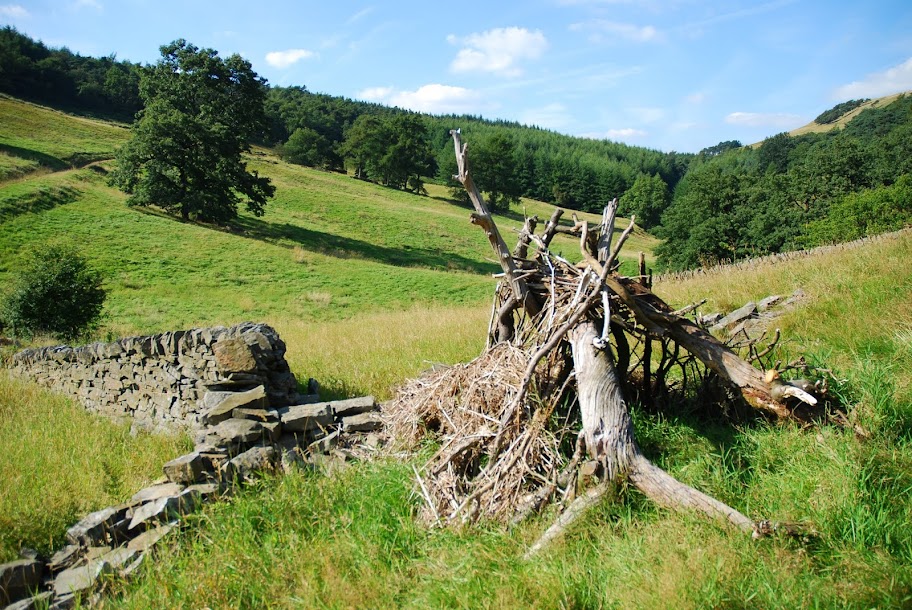 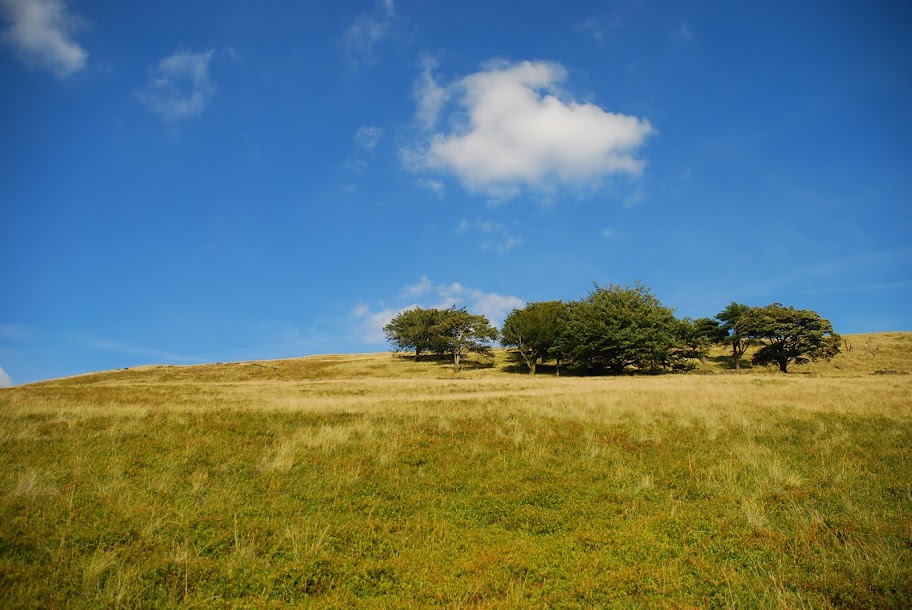 There was also a private school attended by about thirty local children.  For a time in the late 19th century Miss Dona Maria Dolores de YBarguen, a Spanish noblewoman, was the teacher there and close family friend.  After her death the family built a shrine to her memory in 1889 on the moor above the Hall. I went in search of the shrine in brilliant sunshine along the hillside carpeted with heather and bilberries.  The shrine is quite a walk from the ruins of Errwood Hall, and it’s strange to encounter the tiny round structure in the middle of the moor. 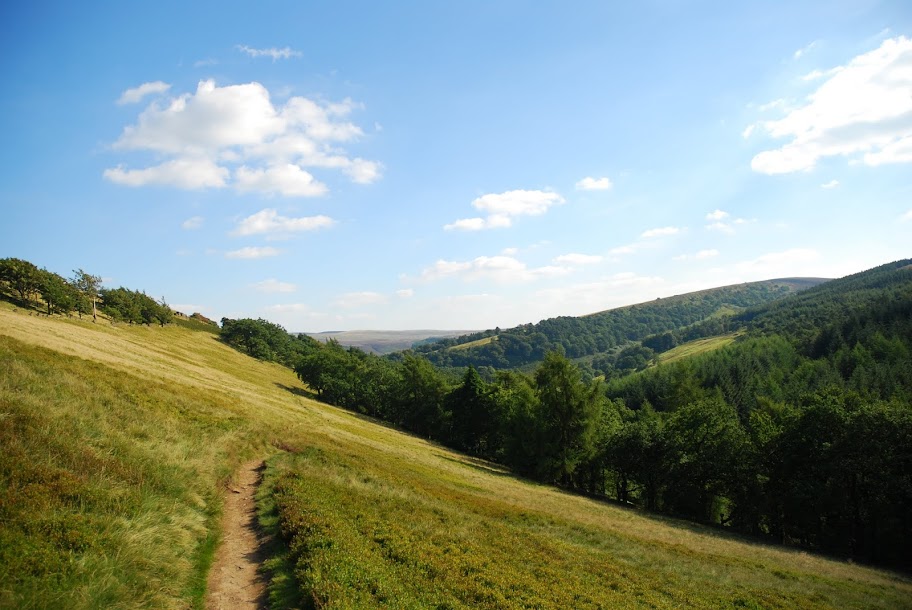 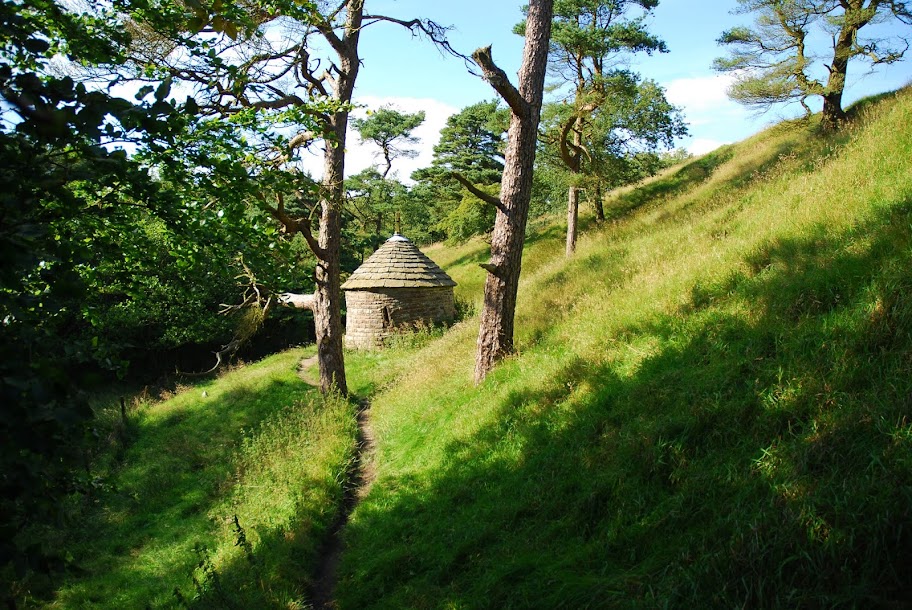 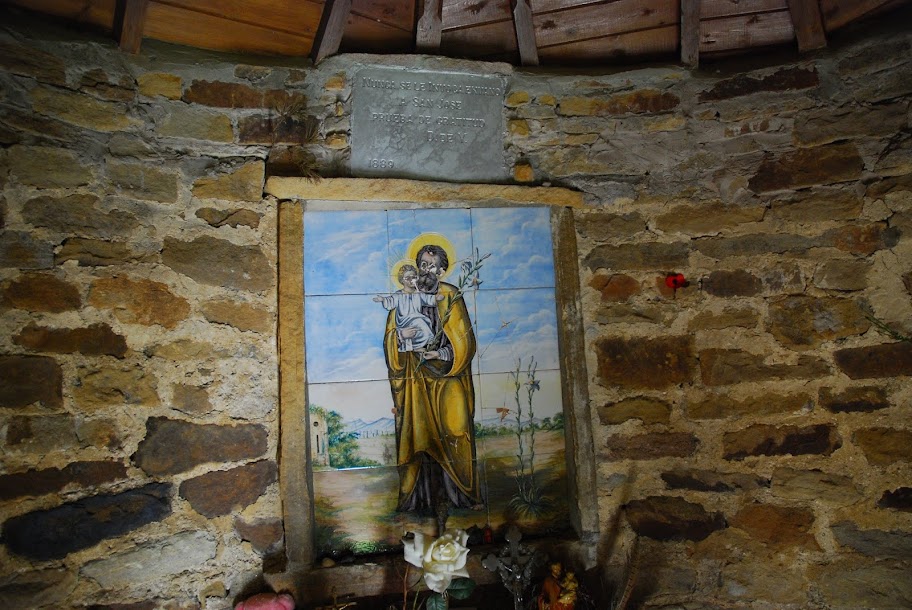 The shrine is well-maintained and has been re-roofed.  Inside, it’s clear that it is still serving its original function – there are plastic flowers on the altar, icons, candles, letters and poems left by visitors.  There is a memorial tablet for Dolores de YBarguen which reads in Spanish, ‘No one prays in vain to St. Joseph’, with the initials D de Y. 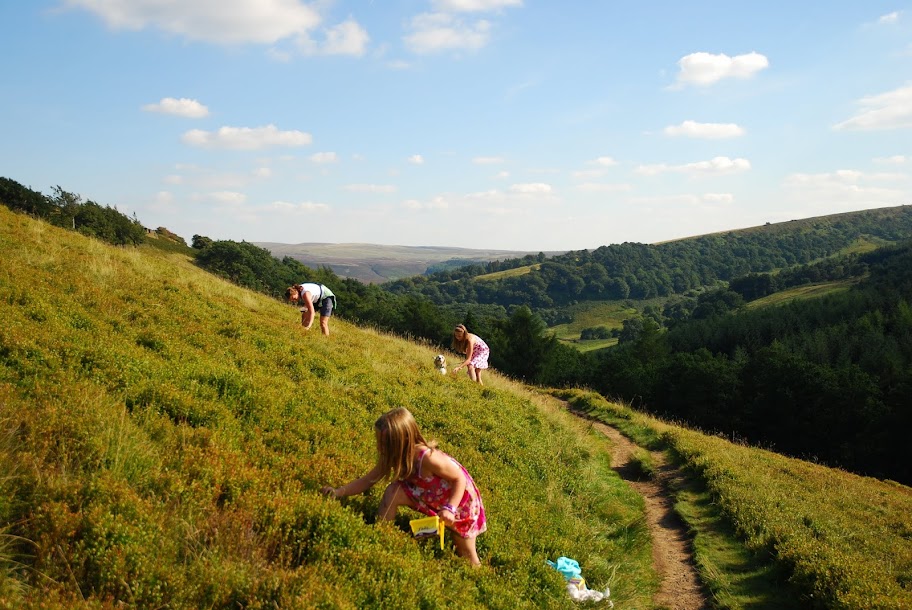 I retraced my steps down the valley, passing a family out bilberrying.  There was one final relic of the Hall and its inhabitants that I wanted to locate. 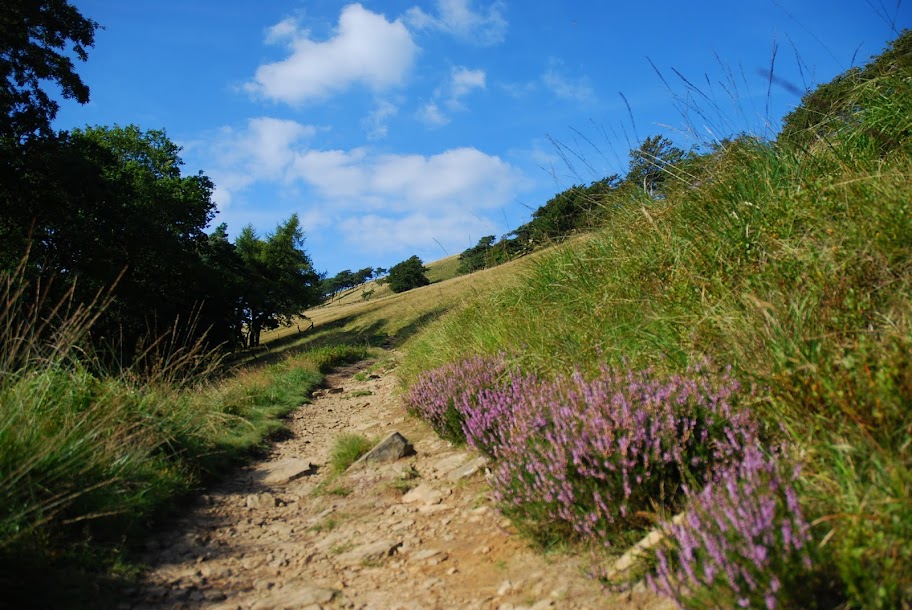 The Grimshawes had a private family cemetery which I  found on a high point behind the Hall and overlooking the Goyt valley. The graves of all the descendents of  Samuel Grimshawe are here, plus those of the captain of the Grimshawe yacht, and several of the servants of the family. The grave of Samuel Grimshawe, the original founder of Errwood Hall is at St Peter’s Church in Manchester. 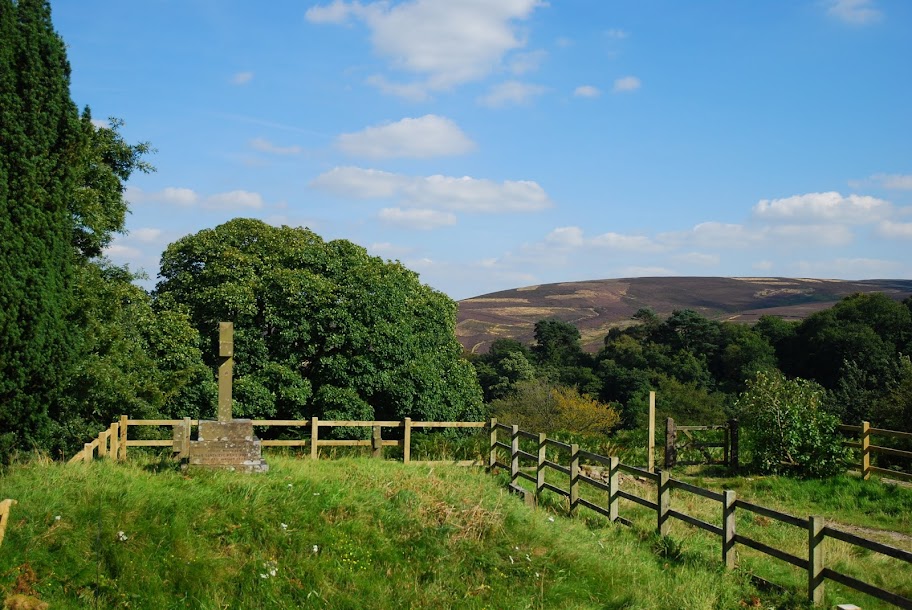 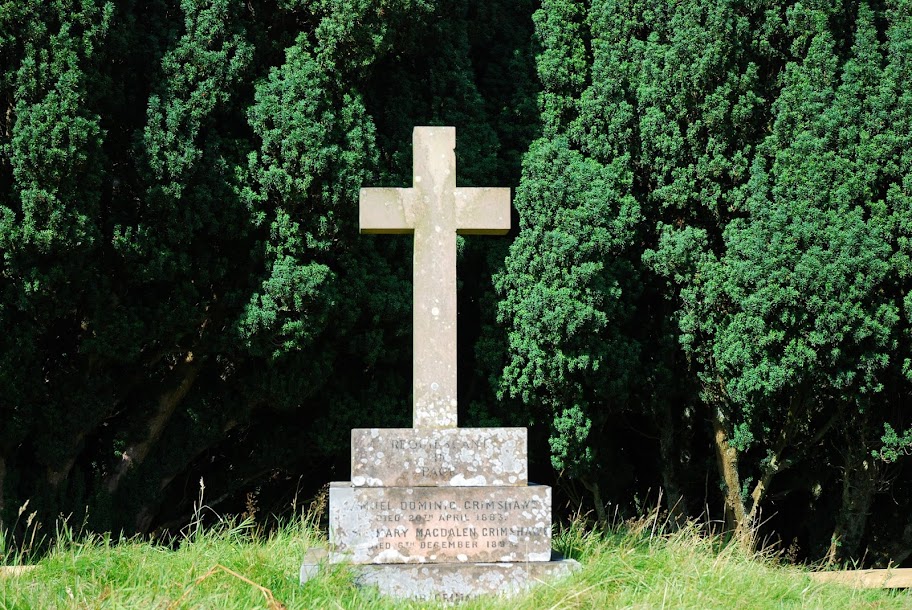 The last family member to live at the Hall died in 1930 and the Hall was emptied of the family collections of fine art, porcelain and furniture at an auction in Macclesfield that June.  The Macclesfield Courier reported on  21 June 1930:

The beautiful surroundings of Errwood Hall, Goyt Valley, near the Cat and Fiddle, attracted large numbers of would-be buyers to the Hall last week for the sale of the household goods and chattels. The sale, which is in the hands of Messrs Turner and Son, has been authorised by the Misses Preston, who are giving up possession of the Hall.

The sale commenced on Monday last, on which day extensive bordering of rhododendrons along the winding three-quarter mile drive from the lodge to the Hall, with the help of the strong sunlight, looked their best. On each day there was a large number of buyers from the length and breadth of England, but despite this, however, the bidding was rather slow and, on the whole, poor prices were realised. The highest prices during the sale of the pictures on Tuesday was £400 for an old Spanish painting, purchased by Mr J.U. Gaskell of Ingersley Hall, Bollington.

It was already known that construction of Fernilee reservoir would begin in 1931-2, so for a short while The Hall became a Youth Hostel, until 1934 when Stockport Corporation purchased all the land for the construction of Errwood Reservoir. The Hall was demolished and the best stone used for the water treatment works, situated below the Fernilee Reservoir Dam. 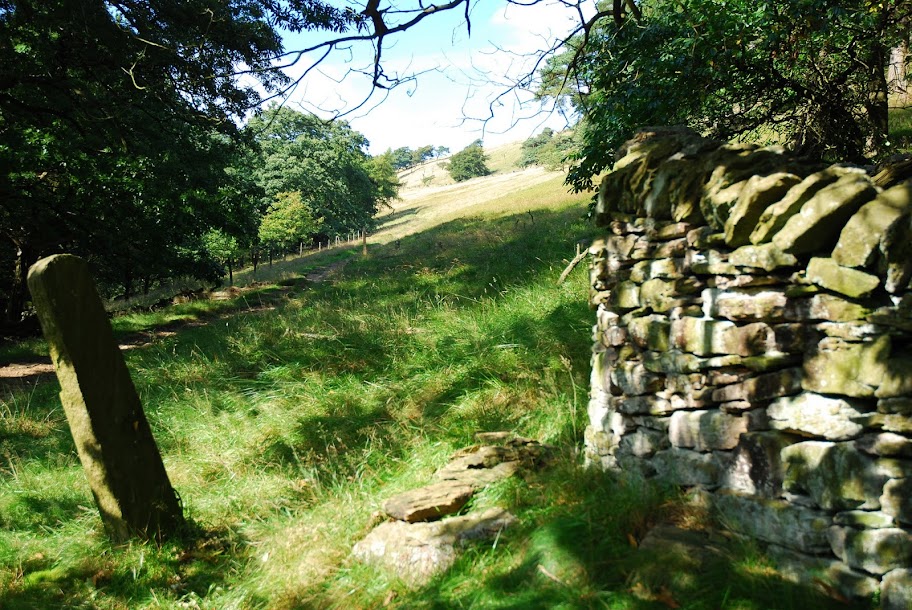 Next: Whaley Bridge to Marple

8 thoughts on “Errwood Hall: a mansion on the moor”