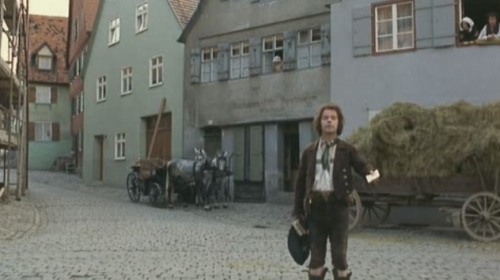 Do you not hear this horrible scream all around you that people usually call silence?
– George Buchner: opening titles of Kaspar Hauser

There’s a part of me that feels, in Thea Gilmore’s words, that ‘sometimes the beauty in this world comes from just not knowing – feeling instead’.  I suppose this is why I am always overwhelmed watching Werner Herzog’s Enigma of Kaspar Hauser with its central theme of the corruption by society and its trappings of our true nature, its dreamily hypnotic landscapes and the astonishing performance by Bruno S as Kaspar Hauser, the strange young man incarcerated with no contact with human beings since childhood. Bruno S, who himself had spent virtually his whole life – from the age of three to 26 – in mental institutions and had narrowly escaped being put to death in the Nazi era, played the part like a man to whom every day is a mystery.

Bruno S (as he was known, though his full name was Bruno Schleinstein) died recently in Berlin of heart failure, aged 78.  He leaves behind two great cinematic performances – as Kaspar Hauser, and as Stroszeck,  a former mental-institution patient and street musician just out of prison, in the film that Herzog wrote for him three years later.

I am transported by Kaspar Hauser from the opening titles, with the quotation from George Buchner –Do you not hear this horrible scream all around you that people usually call silence? – superimposed over a view of wheat waving in the wind (Herzog later went on to direct an adaptation of Büchner’s stage play, Woyzeck). The sequences of Kaspar’s dream landscapes (actually 8mm footage shot by Herzog’s brother as a child in Burma) are other-worldly.

Herzog’s exploration of the limitations of bourgeois life and of the rationalism of the liberal-minded townspeople who attempt to improve Kaspar through language, manners and religion is both wickedly satirical and terribly sad. Never more so than in the final autopsy scene in which it is discovered that his brain exhibits ‘deformity of the left cerebral hemisphere’ which, the medical experts conclude, ‘explains a great deal’.  The town clerk exclaims, ‘What a wonderful, what a precise report this will make!  Finally we have got an explanation for this strange man’.  Herzog’s film – and the performance he evokes from Bruno S as the outsider struggling to make his way in the world – is a cry for tolerance for every ‘unharmful, gentle soul’ placed in social constraints.

It seems to me that my coming into this world was a very hard fall.
– Kaspar Hauser

Of the performance by Bruno S, Jeremy Heilman has written:

The power of the performance by Bruno S, an ex-schizophrenic that Herzog cast as Kaspar, cannot be underestimated here. His flat affect and emotional simplicity are stunning because they represent what’s probably the purest individual on screen outside of Dreyer’s Joan of Arc. There seems to be no illusion in the performance, even though there surely is a good deal of it. Because of his sheer lack of perspective, Kaspar is in a unique position to truly reject science, religion, philosophy, and logic. Because of that, the decency that emerges from him feels like proof of man’s propensity toward goodness. His eventual defeat becomes profoundly moving because of society’s failure to recognize him as the testament that he is.

According to the critic Roger Ebert:

Werner Herzog’s films do not depend on ‘acting’ in the conventional sense. He is most content when he finds an actor who embodies the essence of a character, and he studies that essence with a fascinated intensity. […]

“Bruno is a man whose life in his youth was catastrophic and obviously made him a ‘difficult’ person to deal with,” Herzog explained. “Sometimes he would stop work by ranting against the injustices of the world. I would stop the entire team in their tracks.” Herzog would tell them: “Even if it takes three or four hours of non-stop Bruno speaking about injustice we … would all listen. I would always make physical contact with him. I would always grab him and just hold his wrist. Otherwise, he is a man of phenomenal abilities and phenomenal depth and suffering. It translates on the screen like nothing I have ever done translates on to a screen. He is, for me, the Unknown Soldier of Cinema.”

The Enigma of Kaspar Hauser is a lyrical film about the least lyrical of men. Bruno S. has the solidity of the horses and cows he is often among, and as he confronts the world I was reminded of W. G. Sebold’s remark that men and animals regard each other across a gulf of mutual incomprehension. The film’s landscapes, its details from nature, its music, all embody the dream world Kaspar entered when he escaped the unchanging reality of his cellar. He never dreamed in the cellar, he explains. I think it was because he knew of nothing else than the cellar to dream about. […]

The film’s German title translates as, ‘Every Man for Himself and God Against All’.  That seems to summarize Kaspar’s thinking. The mystery of the captive’s origins has occupied investigators ever since he first appeared. Was he the secret heir to a throne? A rich man’s love child? We have glimpses of the man who held him prisoner and then set him free, standing behind him and kicking his boots to force him to walk. Who is this man? He is never explained. He may be the embodiment of Kaspar’s fate. We may all have somebody behind us, kicking our boots. We are poor mortals, but it dreams to us that we can fly.

Bruno Schleinstein’s obituary in The Guardian includes this:

Werner Herzog is a singular film director, drawn to bizarre characters and situations in strange surroundings, with a preoccupation with outsiders who refuse to conform to a limited social structure. So it was not surprising that he was drawn to Bruno Schleinstein, known and credited only as Bruno S, who has died of heart failure aged 78. Even if one had no idea of Bruno’s history, one could not fail to sense that there was something extra-artistic in his performances in the title roles of the two films he made with Herzog: The Enigma of Kaspar Hauser (Jeder für Sich und Gott Gegen Alle, 1974) and Stroszek (1977). With his jerky gestures, staccato speech and staring eyes, there seemed to be a thin line between the actor and the characters.

Bruno S, who never knew who his father was, was born in Berlin to a prostitute. At three years old, he was sent to an institution for children with learning difficulties. Thereafter, with almost no education, he spent the next 23 years in various institutions and prisons, and for some time was thought to have suffered from schizophrenia. In the meanwhile, he had taught himself to play various instruments, including the piano, accordion and glockenspiel.

In 1974, Herzog was looking for someone to play Kaspar Hauser in a film based on the true story of the strange young man who appeared suddenly in the town square in early 19th-century Nuremberg, and who had had no contact with human beings since his childhood. By chance, Herzog happened to see a 1970 documentary which told the story of Bruno S, chronicling his experiences during the Nazi era, during which he was fortunate to escape being put to death, as he was considered “unfit” for society.  He was in a mental institution from the ages of 3 to 26-and yet was not, in Herzog’s opinion, mentally ill; it was more that the blows and indifference of life had shaped him into a man of intense concentration, tunnel vision, and narrow social skills. 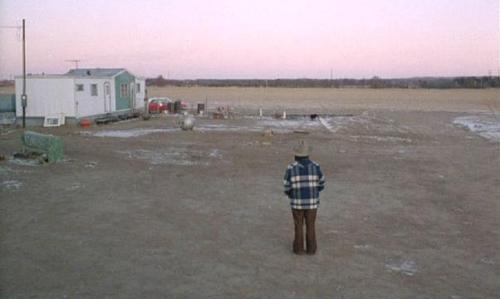 Three years after Kaspar Hauser won the grand jury prize at the 1975 Cannes film festival, Herzog wrote Stroszek for Bruno S, in which he played Bruno, a former mental-institution patient and street musician just out of prison, who, with his elderly neighbour and a prostitute, leave Germany for America in order to find a place in the world. They end up in a town called Railway Flats, in reality Plainfield, a desolate place that had become known for a spate of mass murders. Herzog explained: “You have these points in the United States – for example, Las Vegas, or the Stock Exchange on Wall Street, or San Quentin prison – where the dreams and nightmares all come together. And I count Plainfield, Wisconsin, amongst them.”

Film critic Roger Ebert celebrated the haunting impact of the performance by Bruno S., who is at every moment playing himself.  The film drew heavily on Schleinstein’s own life: Stroszek shares his first name, it was shot in his apartment and he played the piano he had bought with his fee from Kaspar Hauser. He also improvised a long speech that recalled his own childhood.  What resulted was a moving account of three friends tenaciously trying to break out of what Bruno refers to as ‘the cycles of life’ which cannot be escaped.  He is proved right of course, and the new life they build for themselves gradually crumbles.  Although the overall tone is melancholic,  there arer moments of great humanity and scenes of great absurdity; none more so than the final 15 minutes, which must, in spite of their heart-wrenching sadness, be among the strangest and most delightful ever committed to film. For a sense of the mad genius of this finale, just consider the closing words: “We’ve got a truck on fire, can’t find the switch to turn the ski lift off, and can’t stop the dancing chicken. Send an electrician.”